910 m
Elevation
Elevation is the altitude of a place
above sea level.

888 m
Prominence
Peak’s prominence is the least
vertical to be covered to get from the
summit to any other higher terrain.

Proportional Prominence 890 m
Location
49.120535 N  -122.127875 W
Sumas Mountain, also referred to as Canadian Sumas to distinguish it from an identically-named mountain just south in Washington state, is a mountain rising from the floodplain of the Fraser River in the Lower Mainland of southwestern British Columbia, Canada. Its western end is in the urban area of Abbotsford and is home to a number of suburban areas of that city, notably Clayburn. In its central portion is the historic community of Straiton, officially named in 1904 for Thomas Bell Straiton who founded a homestead on Sumas Mountain in 1893 and also a store and post office. Its higher eastern reaches tower over Greendale, a community within the City of Chilliwack and is mostly wilderness; the mountain's summit, Sumas Peak, is located in this area, along with Chadsey Lake. The mountain is separated from the Cascade Mountains by the drained lake now called Sumas Prairie, south of which is its American sister, Sumas Mountain, and which is part of the greater floodplain of the Fraser River (the Fraser Lowland). West of the mountain is Matsqui Prairie, another floodplain, and north of the Fraser, which lies along the mountain's north flank, are similar floodplains - Nicomen Island and Hatzic Prairie.

Sumas Mountain Provincial Park is located in the higher, northern reaches of the mountain. Historic industry on the mountain includes livestock and crop farming, logging, and mining, notably brick-clay, which gave rise to the mining community of Clayburn. Farming, gravel mining, and logging continue on the mountain to the present day. Located on the mountain's north foot, adjacent to the Fraser, is a Canadian Forces base naval station. On its south side is the reserve of the Sumas First Nation.

The mountain protects McDonald Park, a dark-sky preserve, from the light pollution caused by the nearby cities of Abbotsford, Chilliwack, and Mission.
There's a hiking trail (T1) called Eastern Lookout Trail leading to the summit. 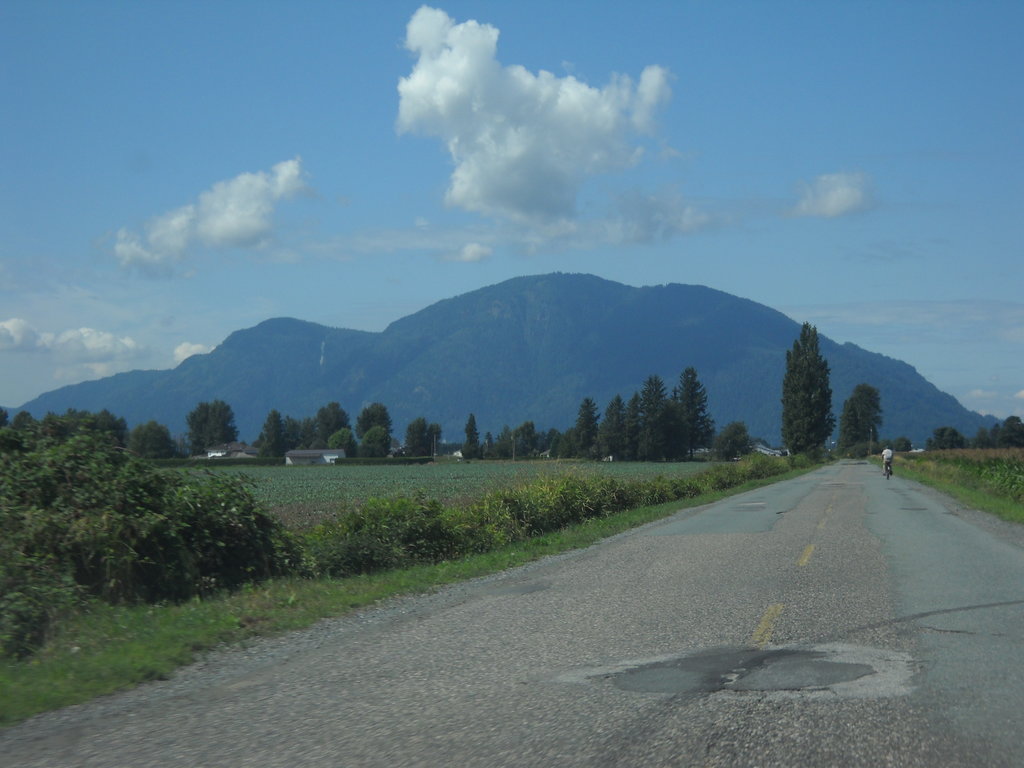 49.188931 N   -122.198283 W
Nearest Higher Neighbor
Dewdney Peak - 9.2 km NW
El: 930 m / Prom: 160 m
Summit Register
See all
Benton Petty
Check out a downloadable 3D model of Sumas Mountain area. A higher resolution model can be found in the PeakVisor mobile app.
Do you have photos of Sumas Mountain or know something about it? Please let us know!