592 m
Elevation
Elevation is the altitude of a place
above sea level.

333 m
Prominence
Peak’s prominence is the least
vertical to be covered to get from the
summit to any other higher terrain. 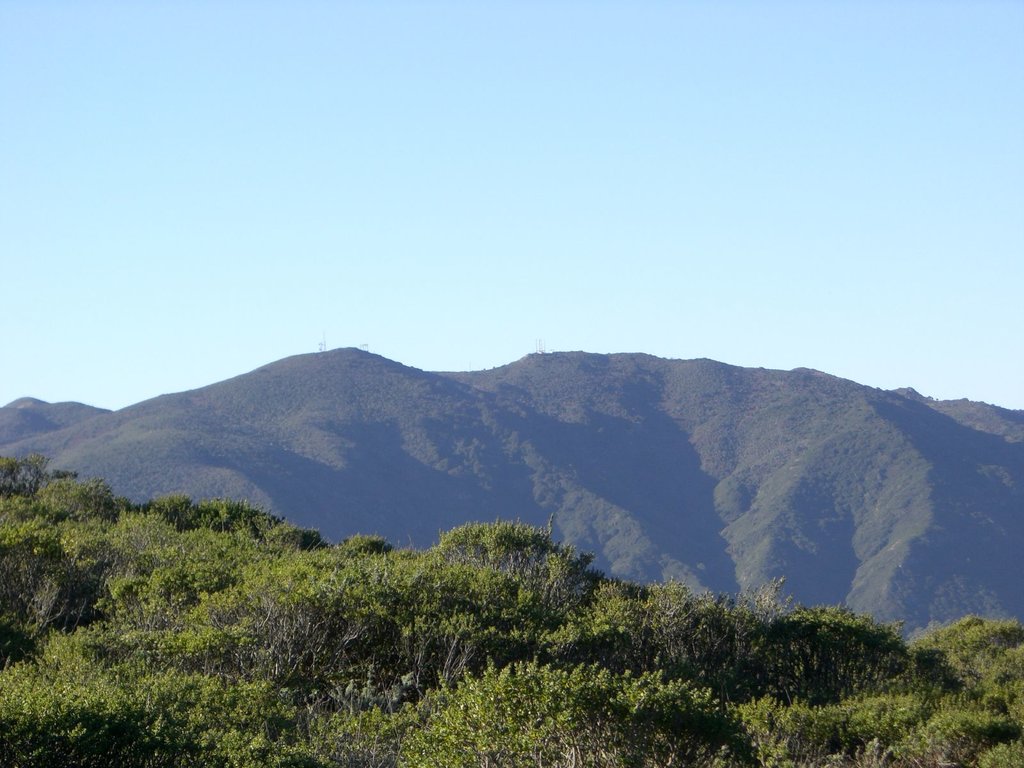 Montara Mountain, positioned between the unincorporated community of Montara, California to the southwest and the city of Pacifica, California to the north, forms the northern spur of the Santa Cruz Mountains, a narrow mountain range running the length of the San Francisco Peninsula that separates San Francisco Bay from the Pacific Ocean. Its highest point rises to 1,898 feet (579 m) above sea level. An unpaved fire road, the North Peak Access Road, accessible from the Pedro Mountain Road in McNee Ranch State Park, provides access to the summit by hikers from the south. From the north, Montara Mountain Trail, Hazelnut Trail and Brooks Creek Trail provide access to the mountain with trailheads in San Pedro Valley County Park.

Due in part to its biologically isolated location near the end of a peninsula, the mountain has an extensive and unique biodiversity, especially on the serpentine soils of the lower slopes. A number of plant endangered species are found on this mountain, including Hickman's potentilla and San Mateo thornmint, Acanthomintha duttonii. The rare endemic manzanita Arctostaphylos montaraensis was named for this mountain.

On occasions light snow has dusted the summit. On clear days the summit provides spectacular views of much of the San Francisco Bay Area. Denniston Creek, Arroyo de en Medio and San Pedro Creek rise on Montara Mountain. The steelhead population in San Pedro Creek is within the Central California Coast Steelhead distinct population segment and is listed at threatened (2011). Brooks Creek, a tributary of San Pedro Creek originates on the north face of the mountain and forms a tall thin waterfall, Brooks Falls, which is the tallest in San Mateo County at 207 feet.

Historic Crossings of Montara Mountain include the Spanish Explorer Gaspar de Portolà in October 1769, traveling along the prehistoric Indian Trail which traverses the ridgeline between Willow Brook Estates towards Saddle Pass following the high ridgeline above Green Valley and winding down towards Martini Creek. Remnants of this trail remain visible today. During the Mexican Rancho era, a road known as Camino Pedro Cuesta also traversed Saddle Pass and connected the Sanchez Adobe in Rancho San Pedro in San Pedro Valley with Rancho Corral de Tierra Palomares in Montara. Following the Mexican–American War of 1848, this routing was known as "Road Trail" and was considered to be nearly impassable to wheeled vehicles. In 1879 this steep and rutted Road Trail crossing of Montara Mountain was replaced by the marginally improved road known as the Half Moon Bay - Colma Road, which included road grades of 24%. This road which routed closer to the ocean and Devil's Slide terminated in Shamrock Ranch and persisted until 1915.