225 m
Elevation
Elevation is the altitude of a place
above sea level.

Location
45.856592 N  -84.607004 W
Arch Rock is a geologic formation on Mackinac Island in Michigan. It is a natural limestone arch formed during the Nipissing post-glacial period, a period of high Lake Huron levels following the end of the Wisconsin glaciation. To this day Arch Rock stands on the Lake Huron shoreline 146 feet (45 m) above the water.

Limestone breccia is not an ideal material for natural bridges, and this type of formation is quite rare in the North American Great Lakes region. The Native Americans saw Arch Rock as a place of numinous power, and told many stories and legends about it.

Euro-Americans did not share many of the taboos of their Native predecessors, and treated Arch Rock as a curiosity to be admired. One early chronicler was Alexis de Tocqueville who wrote of the "Giant's Arch" "of extraordinary shape" during his visit in August, 1831.

Its presence was a major element in the decisions to create Mackinac National Park in 1875 and its successor, Mackinac Island State Park, in 1895. Arch Rock has been a part of the State Park ever since. Today Arch Rock is a focus of Mackinac Island tourism, and is seen by many visitors to the Island. Several trails and paved roads, including the aptly named Arch Rock Road and Arch Rock Bicycle Trail, lead to the formation.
There's a trail called Manitou Trail leading to the summit. 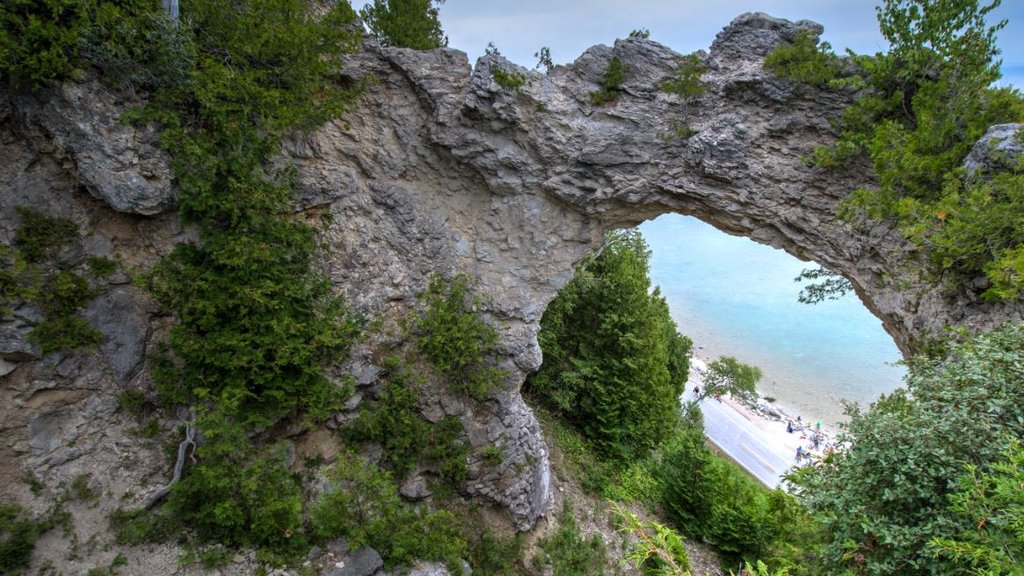 3D View
Arch Rock model
Ranges
Check out a downloadable 3D model of Arch Rock area. A higher resolution model can be found in the PeakVisor mobile app.
Do you have photos of Arch Rock or know something about it? Please let us know!