Dorrigo National Park is a protected area located on the east coast of Australia in the state of New South Wales. It’s a small part of the much broader UNESCO World Heritage-listed Gondwana Rainforests of Australia. The park is home to 7 named mountains, of which the highest and most prominent is Mount Moombil (1042 m / 3418 ft). 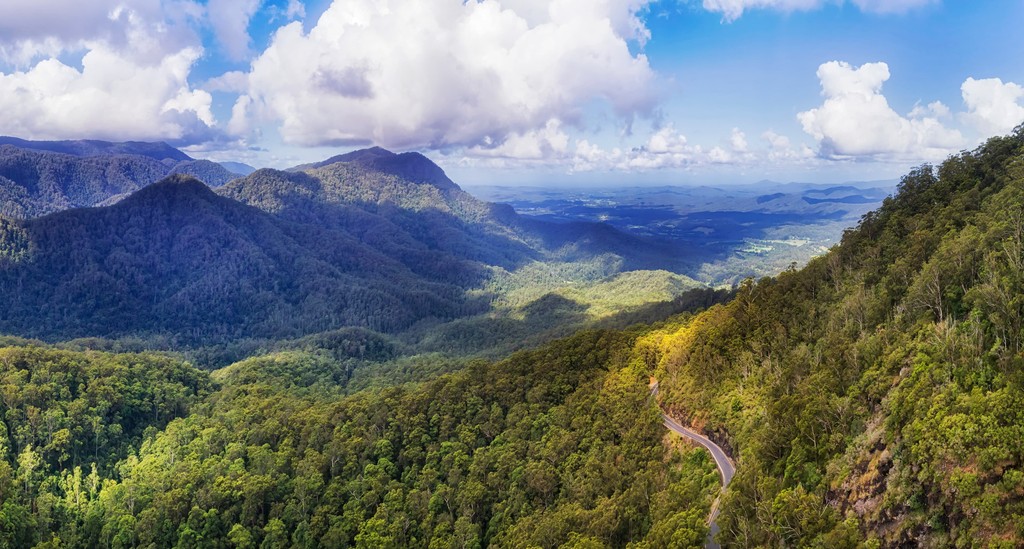 Dorrigo National Park covers an area of around 11,900 hectares (29,405 acres) on the east coast of Australia. It’s located on the mid-north coast of the state of New South Wales and is part of the broader Gondwana Rainforests of Australia which stretches from northern New South Wales to southern Queensland.

The park is characterized by the Dorrigo Plateau which sits in the Northern Tablelands and New England regions of New South Wales. The plateau forms part of the Great Dividing Range.

There are three important rivers that flow through the park, Rosewood River, Never Never River and Wild Cattle Creek. These large water systems produce some spectacular and major waterfalls, which tumble over the escarpment. For this reason, the national park is one of the major stops on what is referred to as the Waterfall Way Road, which links Coffs Harbour on the coast with Armidale further inland.

The Dorrigo Plateau is part of what is often referred to as the Great Escarpment along the east coast of Australia. This was created during the uplift of eastern Australia during the break-up of the ancient Gondwana continent millions of years ago.

Part of the plateau lies on the eroded surface of the Ebor-Dorrigo Volcano which dates to around 19 million years. This former volcanic region stretches across other nearby national parks, including New England National Park.

Basalt outcrops of the volcano can be found in the southern part of the park. Otherwise, much of the plateau is made up of carboniferous metamorphic rocks, mainly argillite and slates of the Moombil beds.

The natural environment of Dorrigo National Park is characterized by broad-leafed rainforests, which include both temperate rainforest and sub-tropical rainforest types across the area.

Perhaps most interesting is the occurrence of Antarctic beech in Dorrigo National Park. This is due to the cooler climate that has allowed the tree to survive for thousands of years. These cooler temperate patches occur mostly around Rosewood River.

The park is a wonderful bird watching destination. There have been over 128 species recorded in the park. Some of the notable birds you might be able to spot include the regent bower bird, green catbird, lyrebird, powerful owl, sooty owl, glossy black cockatoo and wompoo fruit dove.

The Gumbaynggirr are the Traditional Owners of Dorrigo National Park. Many of the natural features of the park’s landscape are associated with their Dreaming stories.

Surprisingly, the park was not as extensively logged during European settlement as other nearby areas. However, there are still remnants of logging activity in the park today. It was initially recognized by Europeans in 1893 when the area was inspected by the government botanist, J H Maiden.

The first attempt at protecting the area was made in 1900, when two waterfalls were set aside as reserves. These reserves slowly grew larger over time until they were passed to the local council in 1954 and popularly became known as Dorrigo National Park.

Walking is one of the best ways to appreciate the stunning rainforest, variety of animals and plants and spectacular waterfalls in Dorrigo National Park. Whether you’re after an easy stroll or a longer day hike, the national park has options for everyone.

Here are some of the best hikes in Dorrigo National Park to check out on your next visit.

This beautiful walk is one of the most popular walking trails in Dorrigo National Park. The moderate 4.5 km (2.8 mi) return walk takes you through the vibrant rainforest toward Crystal Shower Falls.

It conveniently starts from the Dorrigo Rainforest Centre. It gives you the opportunity to listen to the chorus of birds and spot some wildlife on your way. Once you reach the falls, there is a suspension bridge which allows a closer view. You’ll also find a short track that leads you behind the waterfall, offering a different perspective by looking back through the stream of water.

This hike can be extended by continuing to Tristania Falls and completing the Wonga Walk.

This is the standout walk in Dorrigo National Park. The 6 km (3.7 mi) loop hike is one of the most popular walks in New South Wales. It takes you on a shaded walking trail through the subtropical rainforest, from where you can admire ancient trees, colourful fungi and vines and the beautiful sounds of the wildlife.

Along the way, you’ll pass Crystal Shower Falls and Tristania Falls, as well as other smaller cascades. The moderate trail includes some steps, boulder crossings and steeper sections, but is suitable for families.

This more challenging walk is a 6.5 km (4 mi) one way trail through the rainforest along Endiandra Creek. There’s a few steep climbs on this walk but you’ll be rewarded with stunning views across the Dorrigo Plateau.

Along the way, you’ll get to see Callicoma and Casuarina Falls amidst the towering old trees. It’s a great birdwatching trail as well, so don’t forget to bring your camera and binoculars.

The walk begins or ends at Never Never picnic area. You can return the same way to your car or take the easier option by following Dome Road back to the start.

This short but challenging hike will take you to Casuarina Falls. The 5 km (3.1 mi) circuit follows the ridgeline of the Dorrigo Plateau and joins onto the Blackbutt Walking Track.

Along the way you’ll get glimpses of the Sassafras Creek, before finally arriving at the top of Casuarina Falls. From here, you’ll have an incredible view of the national park and deep into the rainforest, before continuing back to the carpark.

For confident hikers, the Red Cedar Falls Walking Track is a strenuous hike that leads you to the biggest waterfall in the national park.

The trail begins at Never Never Picnic Area and follows the Rosewood Creek Walking Track before turning off and descending steeply into the valley. This gives you an incredible chance to stand and admire the incredible plunge of Red Cedar Falls as it tumbles over the escarpment.

The 8 km (5 mi) return hike requires a bit of steep climbing to get back to the picnic area. You should be careful of slippery rocks after heavy rainfall.

Rosewood Creek Walking Track is a moderate 5.5 km (3.4 mi) loop hike beginning and ending at Never Never Picnic Area. The trail is perfect for those interested in the ecology of the park, as you’ll pass some of the largest blackbutt and tallowwood trees you’ll find in Australia.

The loop takes you to Coachwood Falls and a series of smaller cascades and falls along Rosewood Creek, which make for nice rest breaks.

This can be combined with the Red Cedar Falls Walking Track for a longer hike option.

These are the closest towns to the national park:

Dorrigo National Park is located on the mid-north coast of New South Wales. While there’s plenty of towns to base yourself in for a visit, it’s not very close to either of the capital cities on the east coast of Australia. In fact, it’s about halfway between both Brisbane and Sydney.

However, if you’re looking to take an extended road trip from the city, check out these options:

The closest major city to Dorrigo National Park is Brisbane, which is located across the state border in Queensland. The park is situated just 450 km (280 mi) or a 5.5-hour drive to the south of Brisbane.

Brisbane has a domestic and international airport and is accessible by road on major national highways. This means you can easily use Brisbane as a starting point for your trip to Dorrigo National Park and the broader Gondwana Rainforest.

Additionally, Brisbane is the capital of the state of Queensland. It’s located on the eastern coast of Australia along the banks of the Brisbane River. It’s a laid-back city that is best known for its proximity to stunning beaches, islands, and national parks.

Sydney is the largest city in Australia. It’s located on the central coast of New South Wales, and is the capital city of the state. It’s a long drive from Dorrigo National Park (550 km/342 mi), which means you’ll have to plan an extensive road trip to reach the region.

Sydney has a domestic and international airport, and is easily accessible by road via major highways. It’s well-known for its famous landmarks, which include the Sydney Harbour Bridge and Sydney Opera House. You can also find stunning beaches and other national parks not too far from the city center, including Royal National Park and Blue Mountains National Park. 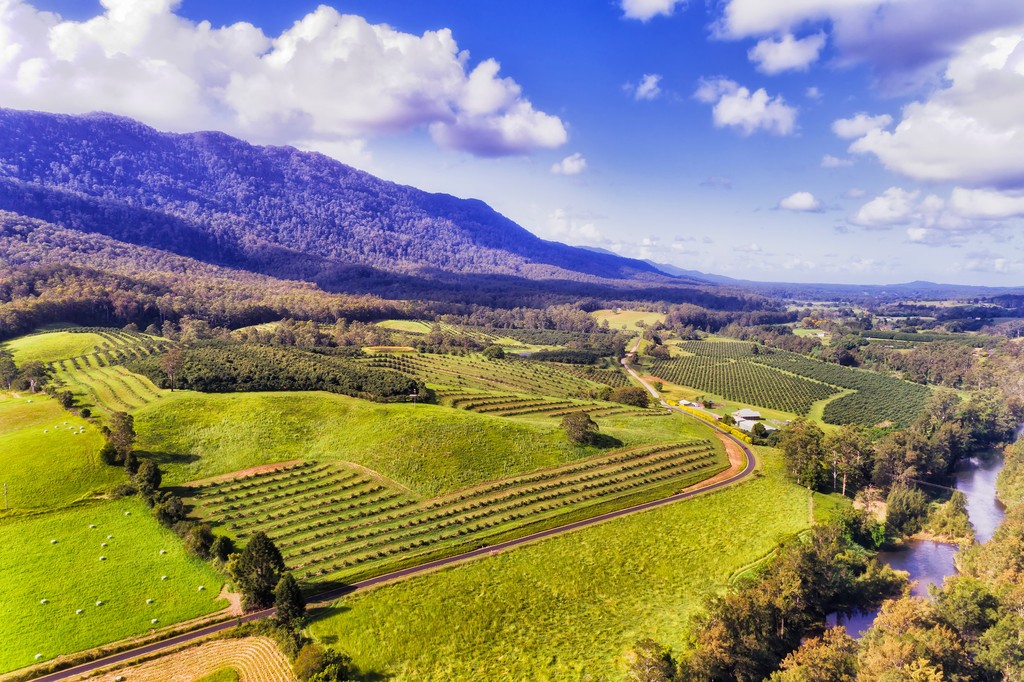 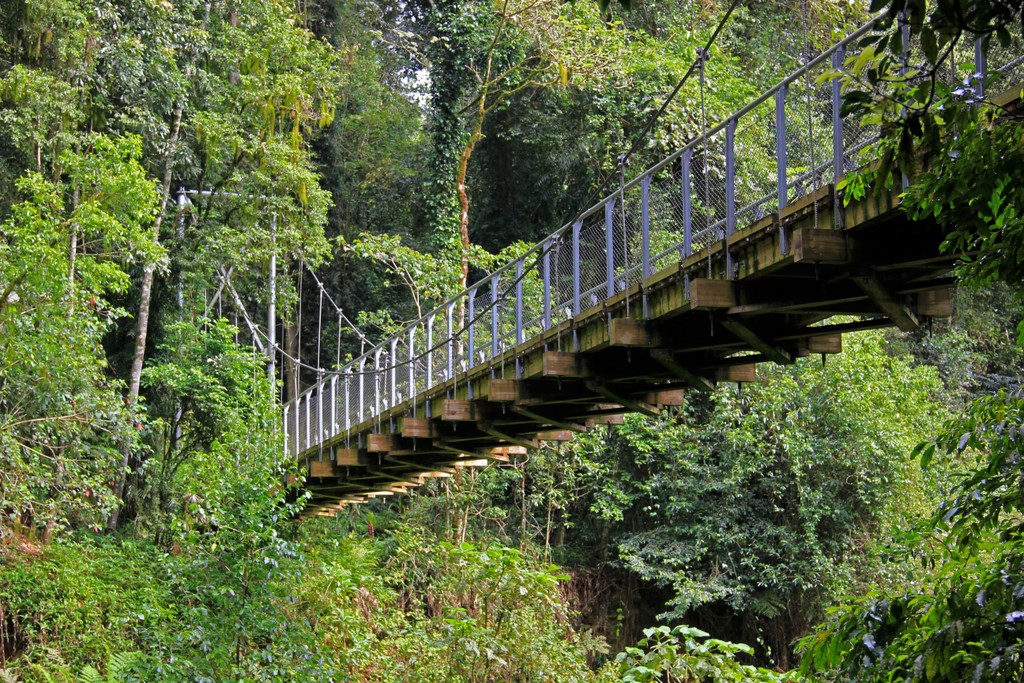 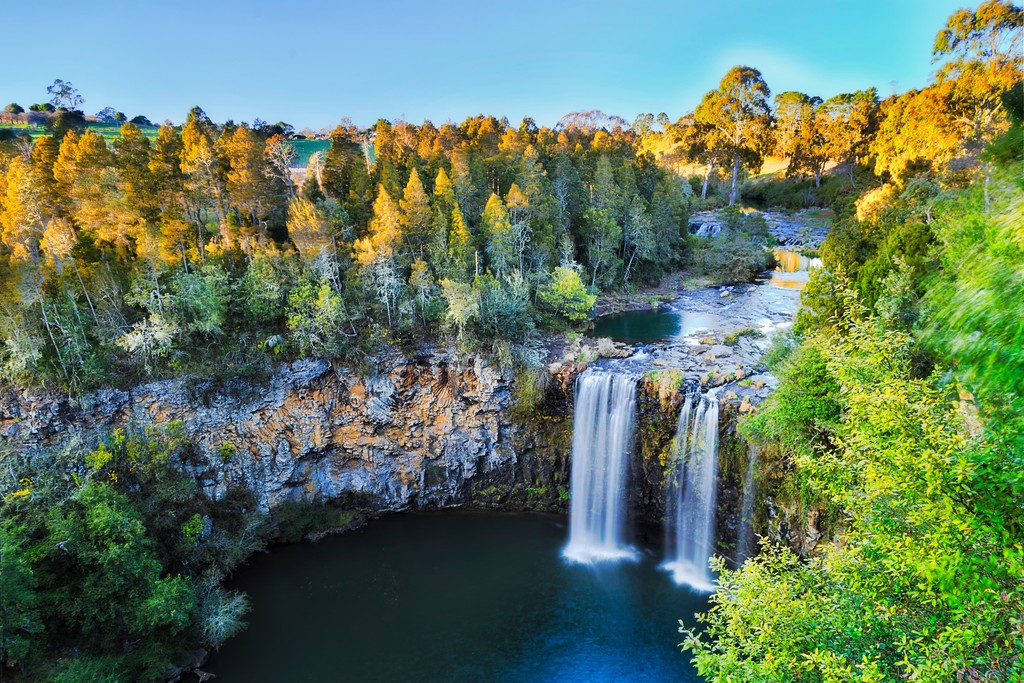 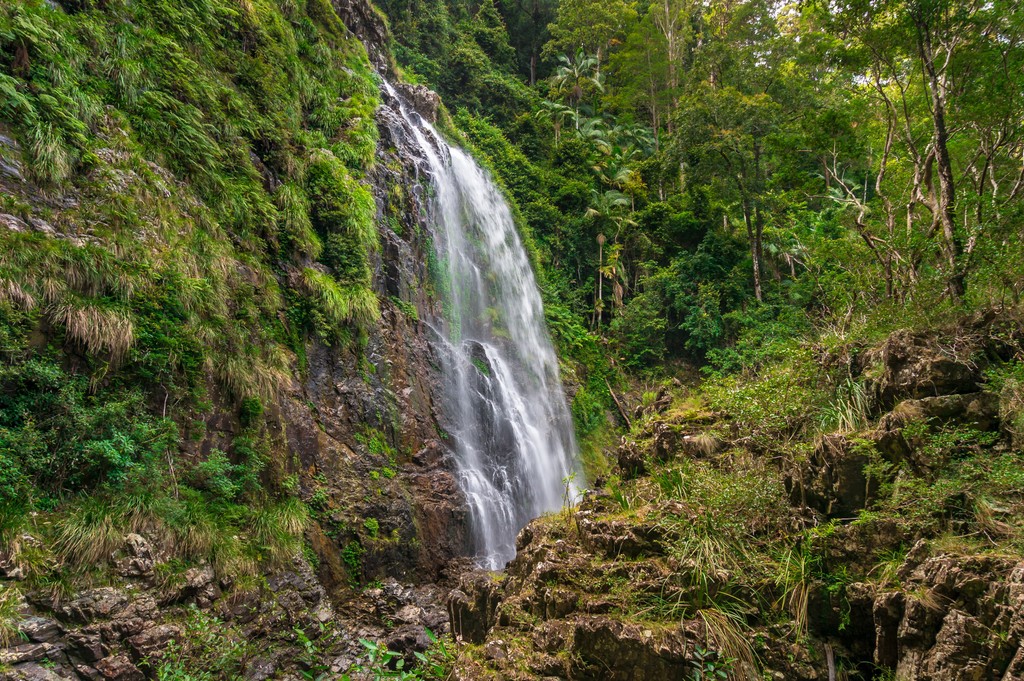 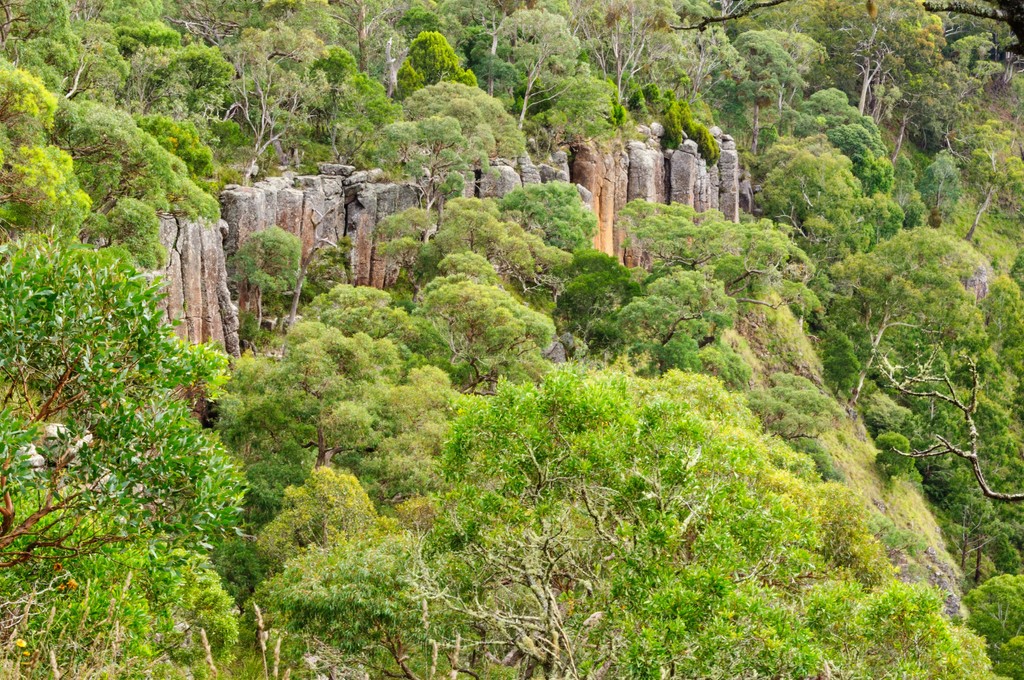 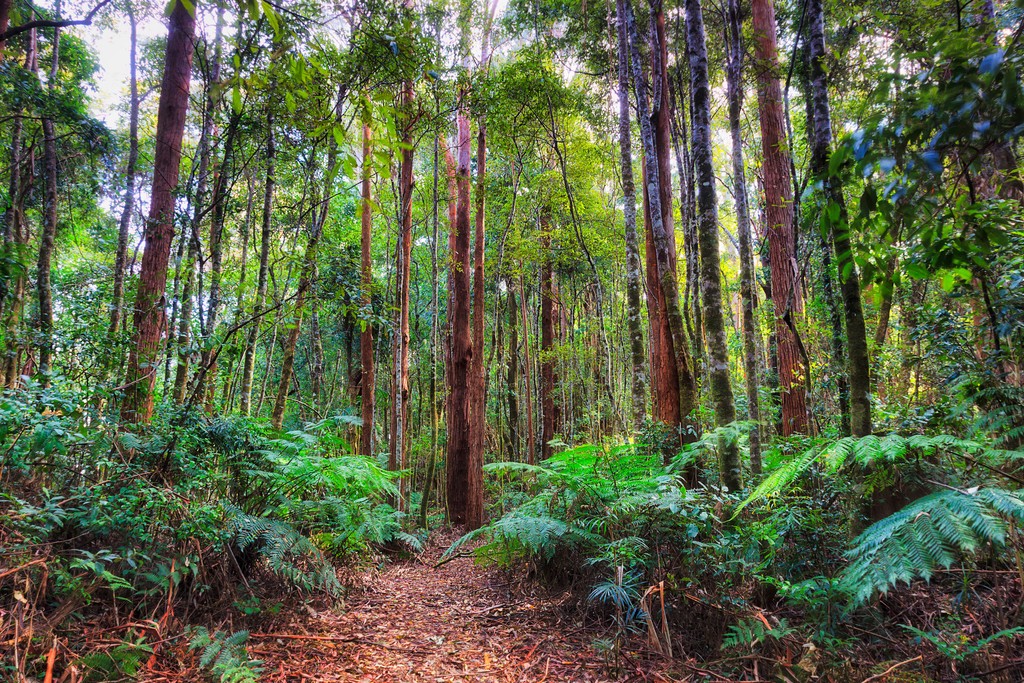