Located a stone’s throw away from the Italian Riviera, Beigua Nature Park is the largest protected area in the Italian region of Liguria. It is rich in biodiversity and it boasts panoramic views, scenic mountain chains, and plenty of hikes for all to enjoy. There are 132 named mountains in Parco Naturale Regionale del Beigua. The highest and the most prominent mountain in the park is Monte Beigua. 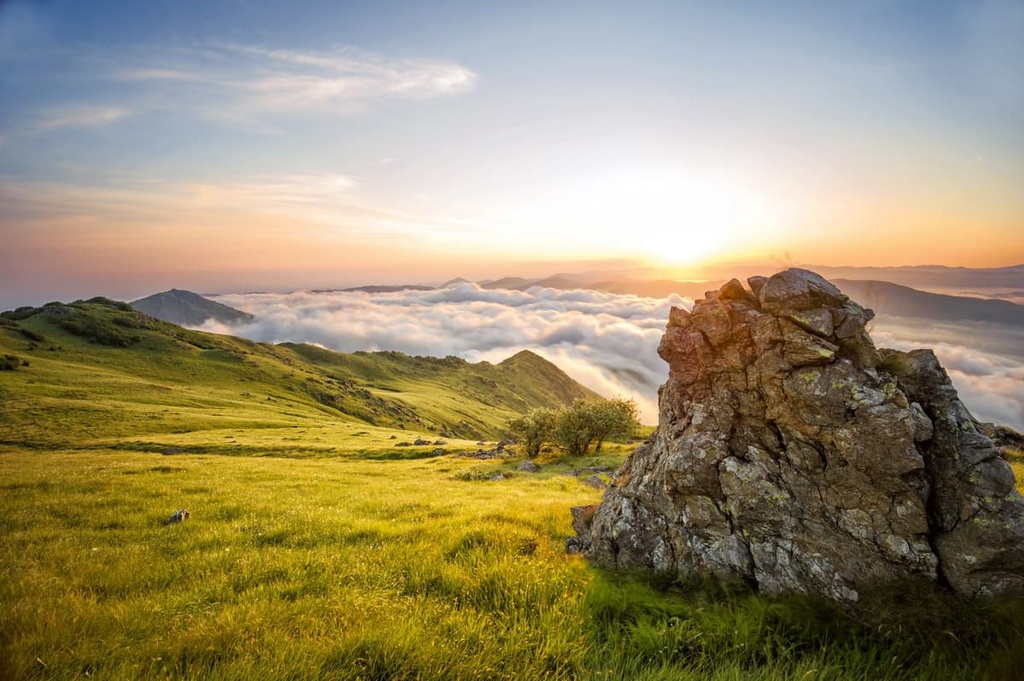 Beigua Nature Park (Parco Naturale Regionale del Beigua) was established in 1985. It is located in the Ligurian Apennines in northwestern Italy, close to the country’s border with France. The park covers over 87 sq. km (34 sq.mi) of protected area and is part of the Beigua Geopark, which encompasses around 390 sq.km (150 sq.mi) of protected land.

Located just outside the city of Genoa (Genova), the park is situated across the provincial districts of both Genoa and Savona and covers ten municipalities: Arenzano, Campo Ligure, Cogoleto, Genoa, Masone, Rossiglione, Sassello, Stella, Tiglieto, Varazze.

The highest mountain in Beigua Nature Park is its namesake Mount Beigua (Monte Beigua/Monte Peigoa). Mount Beigua is one of the 85 peaks located along the multi-day High Route of the Ligurian Mountains (Alta Via dei Monti Liguri). Iit stands at 1,290 m (4,232 ft) in elevation and it has 824 m (2,703 ft) of prominence. The mountain is situated between the municipalities of Varazze and Sassello.

Mount Reixa (pronounced Reja) is nestled between the Faiallo Pass and Genoa at an elevation of 1,183 m (3,881 ft) and with a prominence of 152 m (499 ft). The summit can be reached from either the Faiallo Pass, Voltri, or Arenzano. The multi-day High Route also passes by Mount Reixa.

Another one of the park’s major peaks, Mount Argentea (1 082m/3 550 ft), is a part of the municipality of Arenzano. It belongs to the Beigua group and it forms part of the chain from Faiallo pass to Giovo pass.

Beigua Nature Park boasts 26 km (16 mi) of mountainous ridges that include steep cliffs and rocky outcrops. In 2015, Beigua Nature Park was recognized as a UNESCO site and included in the list of UNESCO Global Geoparks due to its geological heritage and importance in understanding the formation of the Alps and Apennines.

The area is mostly characterized by ophiolitic outcrops with Alpine metamorphic imprinting. It represents a part of the Jurassic ocean basin from 200 to 145 million years ago.

The eastern part of Beigua UNESCO Geopark includes well-preserved Oligocene palaeontological outcrops of tropical fossils such as leaves, shells, and corals. It also features minerals mainly found in the ophiolitic area such as garnets.

There are plenty of interesting rock formations in the park that derive from a periglacial environment. Additionally, there is evidence of fluctuating sea levels in the region. For example, there are the marine terraces in the coastal strip between Arenzano and Varazze as well as canyons formed in the Oligocene conglomerates in Val Gargassa.

The predominant rocks in the area are serpentines, gabbros, peridotites, along with various sedimentary and metamorphic rocks.

The Geopark section of Beigua is well-prepared to offer visitors plenty of opportunity to learn more about the geological history of the area. It features visitor centers and info points, geological trails, guided field trips, thematic exhibitions, publications, and guidebooks.

Beigua Nature Park offers some of the richest biodiversity in Liguria. The ecology of the region is affected by geological and geomorphic elements as the park is situated where the environmental aspects of the Alps, Apennines, and Mediterranean meet. As a result, some 26 different types of ecosystems can be found within the park.

Plant species in the park vary from the basal zone up to the mountainous zone. In the basal zone, there are a high number of coastal halophytes, which can cope with higher levels of salt due to their proximity to the sea.

As you ascend into the mountainous zone, there are mixed woods of beech and black pinewoods, grasslands, and rubble areas of rocks and scree.

The three largest forests in the park are:

The Beigua Nature Park is also home to a variety of wetlands, the largest of which is Laione peat bog.

Additionally, the park is a popular bird watching spot. In the spring and early fall, you can spot birds of prey such as the short-toed eagle, eagle owl, peregrine, kestrel, and honey buzzard. The golden eagle has also been seen returning to nest here. The park is also located along the migratory route of most birds through Italy, such as rock thrushes, whitethroats, and 80 other bird species.

Human settlement in the Beigua Nature Park dates back to the Neolithic, Bronze, and Copper ages with paleo-ethnological finds demonstrating that the area was once home to hunters and shepherds. A museum was set up in 1989 that displays various objects made out of stone and bronze, pottery, and animal fossils that were found near the shelter Riparo sotto roccia.

There are also petroglyphs etched into the ophiolite rocks of the park from the Paleolithic and Iron Ages up until the Middle Ages. The so-called “written stone” (pietra scritta) can also be found near the top of Mount Beigua. It shows markings left by ancient shepherds.

The area was also an important trade route between the Mediterranean coast and the Po valley. It was also home to a settlement of Cistercian monks at the Tiglieto Abbey, which was established in 1120. Traditional farming and forest management practices have defined the area over the past few centuries.

Paper mills, iron forging, and glassworking flourished in this area alongside with wood processing. Typical agricultural products from the area include sweet chestnuts, meat, dairy, honey, and mushrooms. Amaretti di Sassello and Canestrelli biscuits also originate from this region, along with pesto and focaccia.

Beigua Nature Park boasts a network of 500 km (310 mi) of trails, allowing visitors to enjoy the biodiversity and culture of the park. Along many of the paths in the region, you will find information about the surrounding nature and historical and cultural elements in the park.

Here are some of the best hikes to check out in Beigua Natural Park during your next visit:

During your first visit, get to know the park by hiking from Monte Reixa to Monte Beigua, the two best-known peaks in the park. This route will take around 3 hours to walk one-way but you’ll find mountain huts along the way and at the summits.

For an archeological adventure, hike the short 3 km (1.5 mi) archeological circular route to visit the petroglyphs in Laione, between Piampaludo, and Prariondo.

The route can be walked in either direction and takes around 2 hours to complete, with just 80 m (262 ft) of elevation gain. You will also be able to take a peek at the Laione peat bog, the largest wetland in the park.

The Alta Via dei Monti Liguri is a coastal route that covers more than 400 km (248 mi) of terrain. The route passes through the Beigua Natural Park on the main ridge and offers spectacular views across the gulf of Genoa, the Apuan Alps.

Three stages of the route are based in the park:

Each stage can be tackled by intermediate-level hikers. They all offer spectacular panoramic views of the region on a clear day, too.

The Deiva Forest offers enjoyable hiking along easy dirt roads without much elevation gain. Here, you can spot birds and enjoy the woodland and flora and fauna of the park.

The length of the full loop route is around 13 km (8 mi) and should take around 4 hours to complete, giving you the opportunity to enjoy all that the forest has to offer.

For a geology-themed outing, take the 7 km (4 mi) nature trail in the Gargassa valley, which starts and ends in the village of Rossiglione. This path enjoys a mix of canyons, lakes, waterfalls, and rock formations.

Along the route, ophiolitic rocks give way to conglomerates and you’ll notice where ancient waters have carved out interesting formations. This route is recommended for expert hikers due to its exposed stretches that require safety rope to help hikers across and the need to cross several streams. The route takes around 4 hours to complete.

There are also plenty of routes dedicated to Nordic walking in the park. This includes coastal routes, a circular route in the Deiva Forest, as well as a circular route from Curlo to Vaccà to find the best spots to bird watch!

Looking for a place to stay near Beigua Natural Park? Here are some of the best cities and towns to check out:

Genoa is the main city in Liguria, Italy. Once an important naval power during the twelfth and thirteenth centuries, nowadays it is better known as the gateway to the Italian Riviera.

Walking around the city you will come across different styles of architecture such as Medieval, Renaissance, Baroque, and Gothic. If it’s culture you’re after, you can enjoy the historic palazzi in via Garibaldi, see the exhibitions at the Palazzo Reale in Piazza De Ferrari, and visit San Lorenzo cathedral.

Genoa is also home to the largest aquarium in Italy. The aquarium is situated by the port, which has plenty of restaurants and bars to enjoy. Nearby, you’ll also find the Galata Maritime Museum where you can enjoy a panoramic view over the harbor from the top floor. Better yet, you can visit a submarine in the harbor itself!

Savona is a seaport in Liguria’s western riviera. It was once an important player in Italy’s iron industry, as it features iron works, ship building, railway workshops, and a brass foundry.

Christopher Colombus was also associated with this city, as it was where he allegedly farmed the land while chronicling his journeys. The city offers a harbor full of bars and restaurants, a medieval fortress, and the Ghibelline towers. Savona is also the gateway to the western riviera and the beautiful beaches of Bergeggi and Varigotti.

How to Get to Beigua Natural Park

Beigua Nature Park can easily be reached by train, car, or even by plane from Genoa’s Cristoforo Colombo Airport, which offers regular international flights.

The trainline runs along the coast between Genoa and Savona, stopping in Arenzano, Voltri, Cogoleto, and Varazze. There is also another train line running between Genoa and Ovada, where you can reach Campo Ligure and Rossiglione. 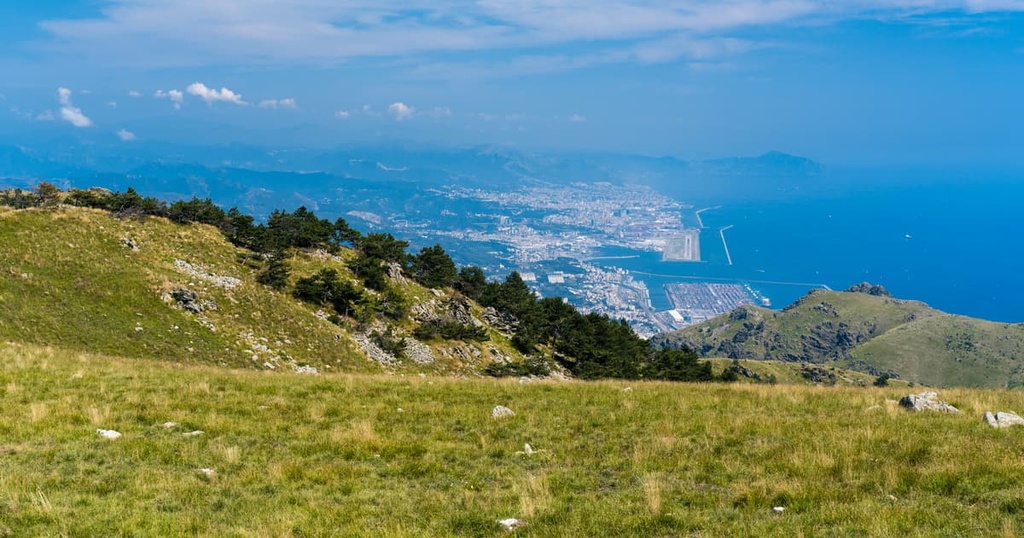 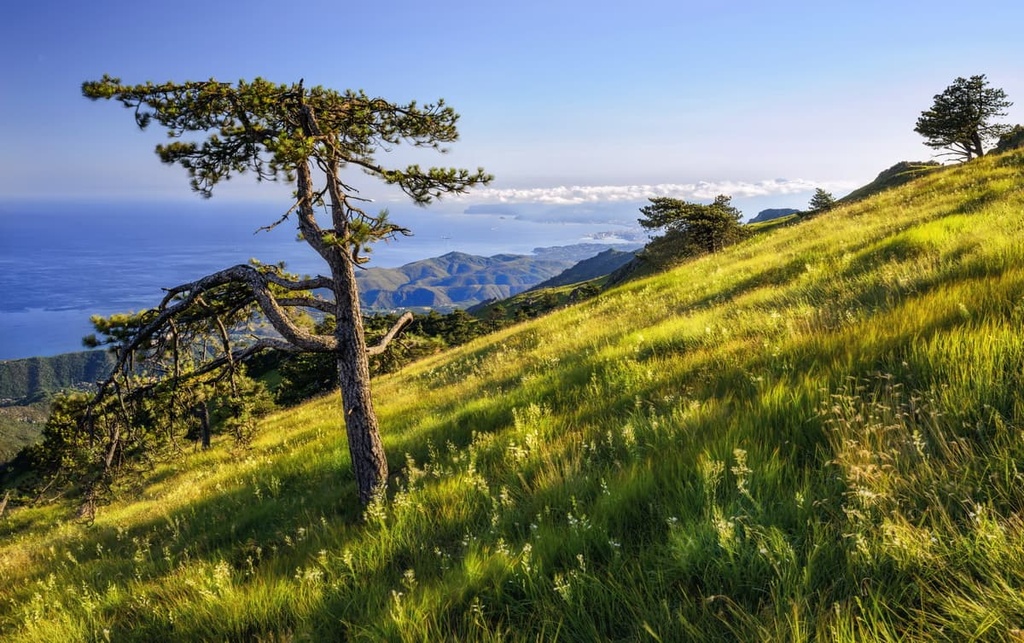 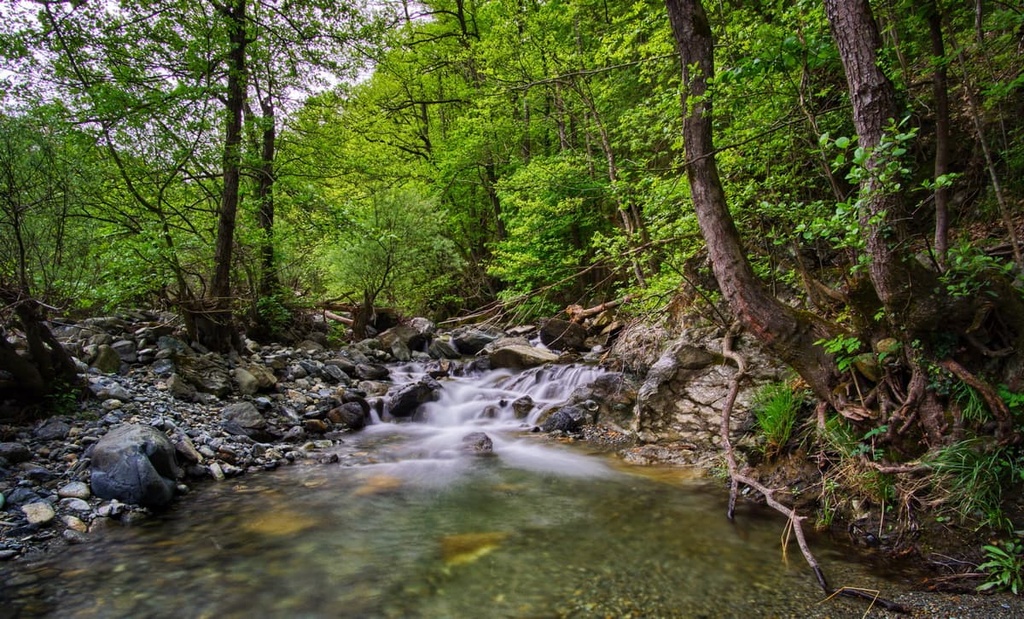 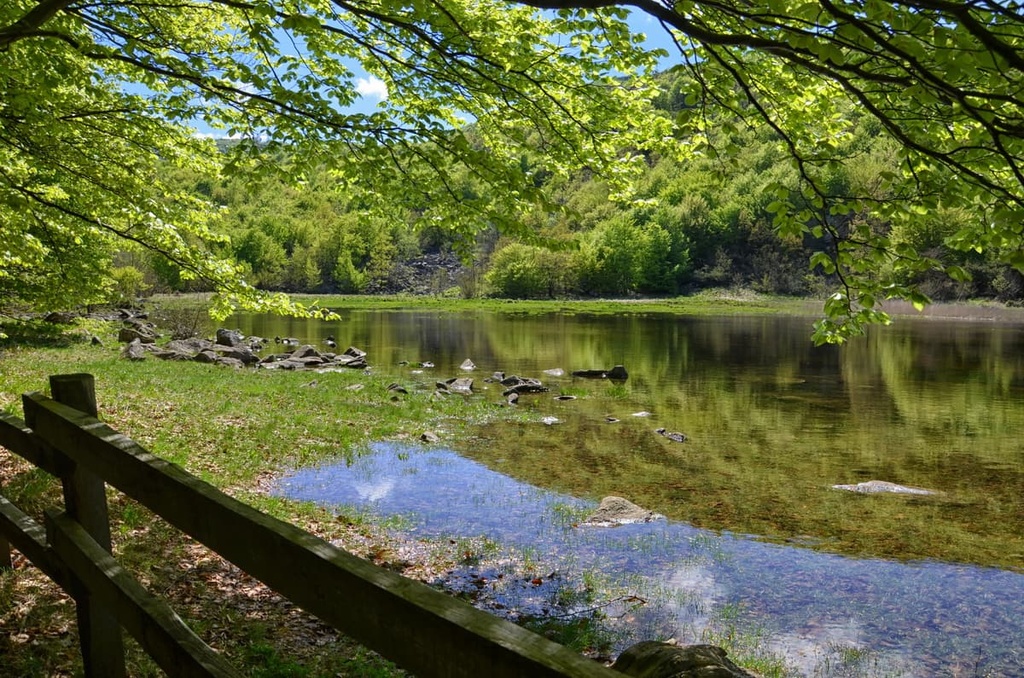 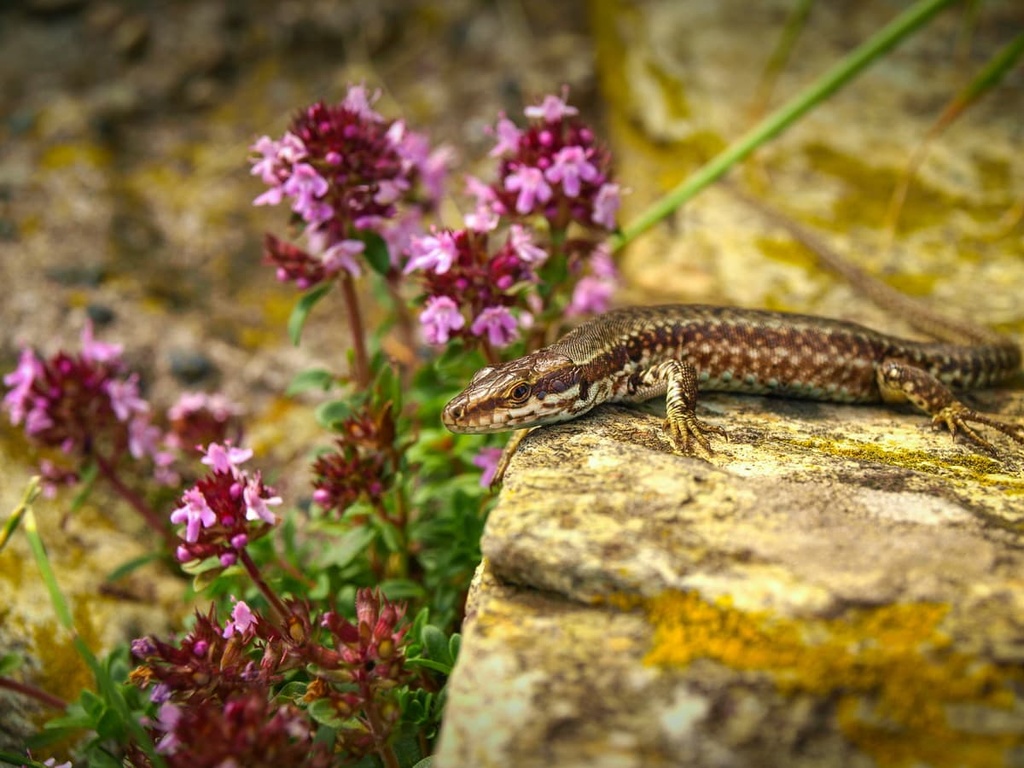 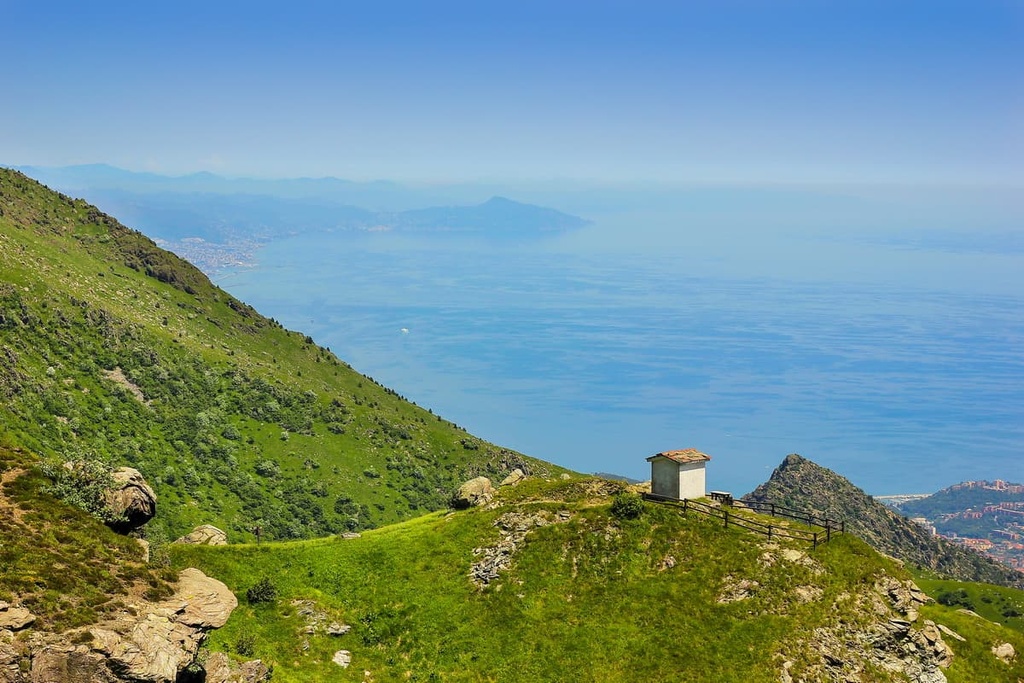