Baxter State Park is located in north-central Maine. The 200,000-acre state park is home to Mount Katahdin, the highest and the most prominent mountain in the state of Maine, and the northern terminus of the Appalachian Trail.

There are a total of 55 named mountains in Baxter State Park. Bordering the Katahdin Woods and Waters National Monument, the park boasts a number of lakes, glacial formations, waterfalls, and rivers.

The park was founded in 1931, when Maine Governor Percival P. Baxter used his own wealth to purchase and donate the park to the state. Baxter expressed a desire to keep the park "forever wild.” In keeping with that tradition, Baxter Park has no access to electricity, running water, or paved roads within its boundaries.

Hiking is one of the most common activities for visitors of Baxter State Park, with over 200 miles of trails throughout the wilderness area. The park is open to summer camping from May 15 to October 15 and winter camping from December 1 to March 31. Roughly a quarter of the park’s land is open to hunting and trapping. Most lakes and streams are also open to fishing.

In the fall, Appalachian Trail through-hikers may be found finishing the last leg of a 2,185-mile journey that began in Springer Mountain, Georgia.

Governance of the park is managed by the Baxter State Park Authority, which consists of the Maine Attorney General, the Maine Commissioner of Inland Fisheries and Wildlife, and the Director of the Maine Forest Service.

Far and away the most popular attraction in Baxter State Park is Mount Katahdin—the highest point in Maine and the last stop on the Appalachian Trail. A Native American word for “greatest mountain,” Katahdin is made up of several peaks, the highest being Baxter Peak at 5,268 feet. Katahdin is also one of the most strenuous hikes in the region. Veterans of the Appalachian Trail frequently list it as the most difficult climb of the entire 2,000-mile journey.

If your sites are set on Maine’s crowning peak, bear in mind the commitment: The average round-trip time for hiking Katahdin is 8-12 hours. Access to the trails, which are among the busiest in the park (especially in July and August), is somewhat restricted. Parking spots are also limited and may need to be reserved.

There are several trailheads leading to Baxter Peak. Unless you are planning a much longer hike approaching Katahdin from the north, the southern Togue Pond Gate offers two branching roads to trailheads. The Park Tote Road will take you to Abol and Hunt—the former being the shortest route to the summit, and the latter being the most popular. With 2.4 miles of trail above tree line, the Hunt trail offers some stunning views of the Katahdin Stream Falls, the Hunt Spur Boulders, and the Tableland—a rocky plateau near the summit.

Approaching from the east allows a hike across the iconic Knife Edge—a sharp and treacherous ridge line just before the Baxter Peak summit. Use the Helon Taylor trail to reach Knife Edge, but beware that this is a dangerous climb and only recommend for experienced hikers. You will need to bear right at Togue Pond Gate and take the Roaring Brook Road to the Roaring Brook trailhead to access the Helon Taylor trail.

Mount Katahdin may be the showcase attraction at Baxter State Park, but the mountain’s trails make up just 16 percent of the Baxter’s 215 miles of trails.

The park is generally separated into eight trail regions:

There’s the Scientific Forest Management Area in the northwest corner, and Trout Brook Farm in the northeast, both of which are relatively flat compared with the rest of the park, the exception being the 1,767-foot peak of Trout Brook Mountain. North of Trout Brook there’s Matagamon Lake, the largest body of water in the park and teeming with trout, salmon, togue, yellow perch, and whitefish. Those visiting Baxter State Park from the north can access the park at the Matagamon Gate, found on the lake’s southern shore, via the Grand Lake Road.

The South Branch Pond area features a variety of trails, most of which crest the 3500-foot peak of Traveler Mountain. Further south, connected via the 8-mile, mostly flat Fogy Notch trail, is Russell Pond. A campground smack dab in the center of Baxter State Park, Russell Pond is lightly trafficked thanks to its remoteness, and offers stunning views of the northern side of Mount Katahdin.

To the southeast, Roaring Brook and Katahdin Lake offer more campgrounds and stunning views of Katahdin from the east, including a number of cabins abutting the 650-acre Katahdin lake. Roaring Brook features an assortment of trailheads leading deeper into the park, and can be accessed via the Roaring Brook Road.

Katahdin’s southeasterly approach is home to the Klondike—a stretch of high, untouched wilderness often referred to as the park’s “purest.” The plateau has no trails, so hikers will have to bushwack at their own discretion.

Overlooking the Klondike from the northwest, a trio of peaks offers spectacular views of Katahdin and the vast plateau below it. These mountains include North Brother (4151 feet), South Brother, (3970 feet), and Mount Coe (3795 feet). Each of these peaks can be reached from the OJI trailhead, which begins at Foster Field off the Park Tote Road.

In the southwest corner of Baxter Park, you’ll find Kidney and Daicey Ponds. These regions feature a hodgepodge of ponds and streams, all looking up at the magnificent southwest face of Mount Katahdin. A complex network of trails connect this entire region and offer a number of options for venturing further into the park. Campsites and trailheads in this region can be accessed by the Park Tote Road from the Togue Pond Gate.

North of the Kidney and Daicey Ponds and west of Katahdin is Doubletop Mountain. One of the more popular hikes in the park, Doubletop skirts Baxter’s western boundary and features two distinct peaks at 3,489 and 3,455 feet each. Doubletop can be accessed from both the north and south via the Doubletop trail.

In all, there are 337 campsites in Baxter State Park; these sites may include tent areas, bunkhouses, cabins, or lean-to shelters. All of them require a reservation and fees to stay overnight. Some may be accessed by one of the few roads in the park, while others can only be reached on foot.

The summer camping season is from May 15th to October 15th; the Chimney Pond site, which is at a higher elevation on Mount Katahdin, is open from June 1st to October 15th.

Winter camping is also available from December 1st to March 31st. Special rules apply for this season and can be obtained from Park Headquarters or the park website. Campers should be cognizant of the often harsh winters found in north-central Maine.

How to Get to the Park

To enter from the south, travel on I-95 until you get to Exit 244. Take the exit and turn west on Route 157. Continue through the towns of Medway, East Millinocket, and Millinocket. Pass through both traffic lights in Millinocket, then turn right at the three-way intersection. Bear left at the next “Y” intersection, staying on the main road until Route 157 ends. Eight miles from Millinocket, you will pass the Big Moose Inn and the Northwoods Trading Post on the right. Continue another eight miles on a paved road until you get to Togue Pond Gatehouse.

Driving in Baxter State Park is difficult, as the roads are all unpaved and narrow. Motorcycles, motorized trail bikes, and ATVs are prohibited. As are pets!

The park is notoriously rugged and remote, so visitors are encouraged to prepare accordingly, regardless of how long they intend to stay. That means bringing all necessary supplies with you, and, of course, leaving no trace. 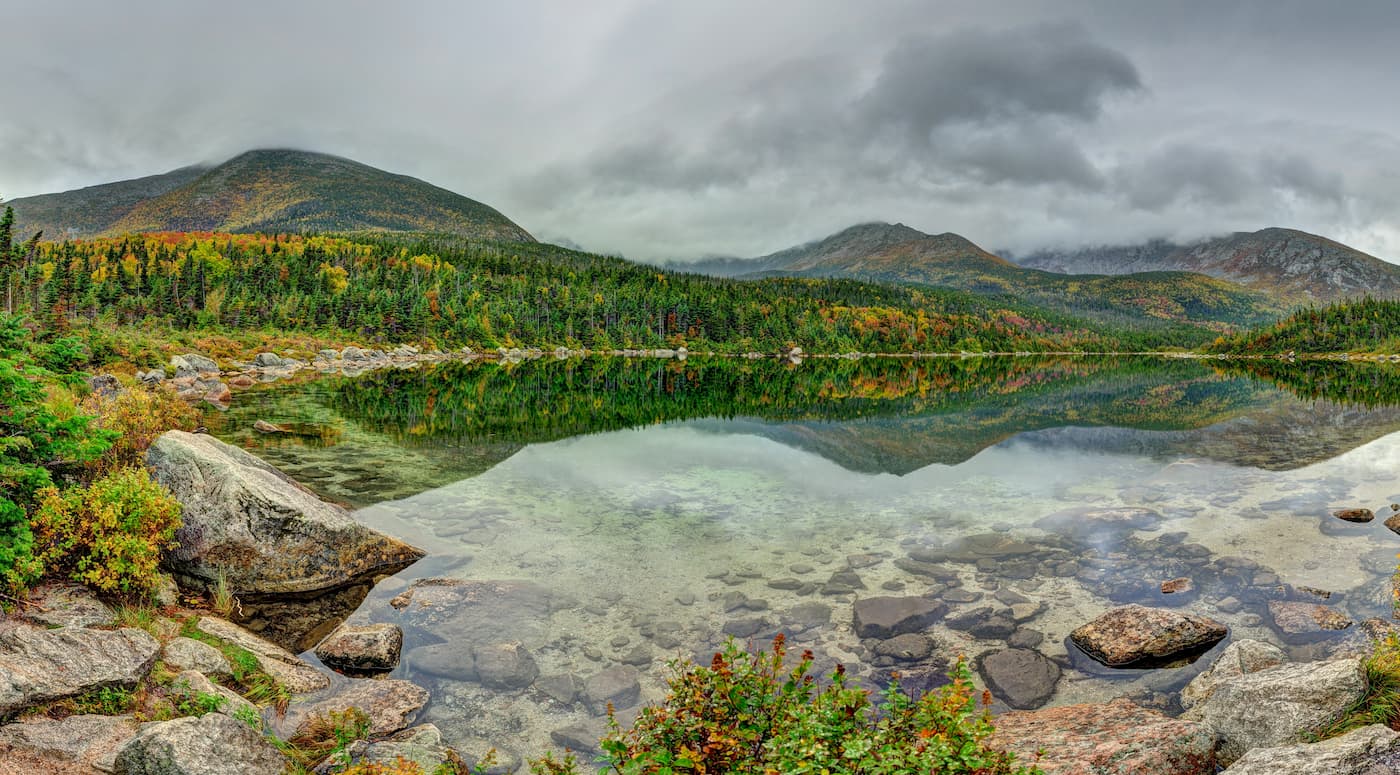 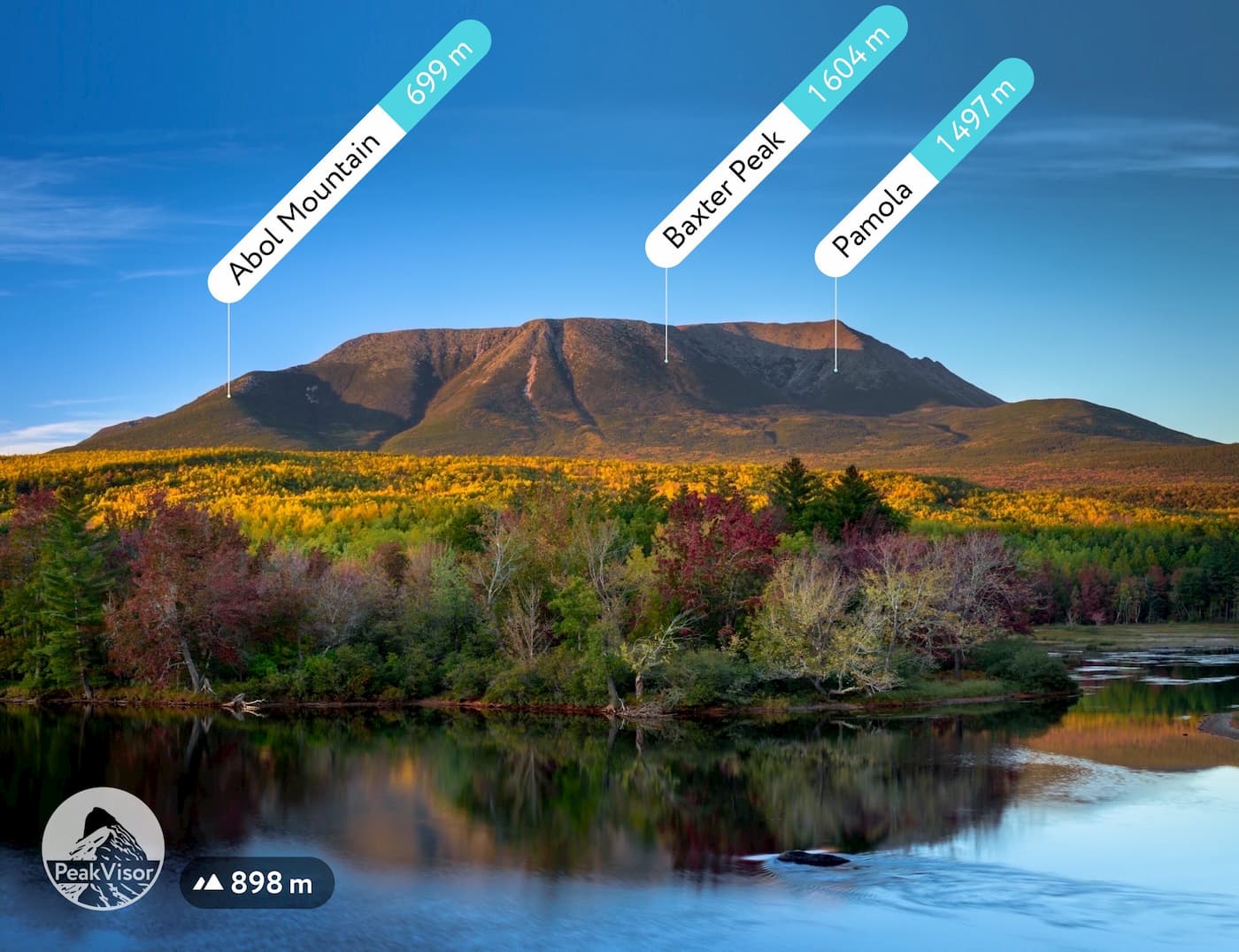 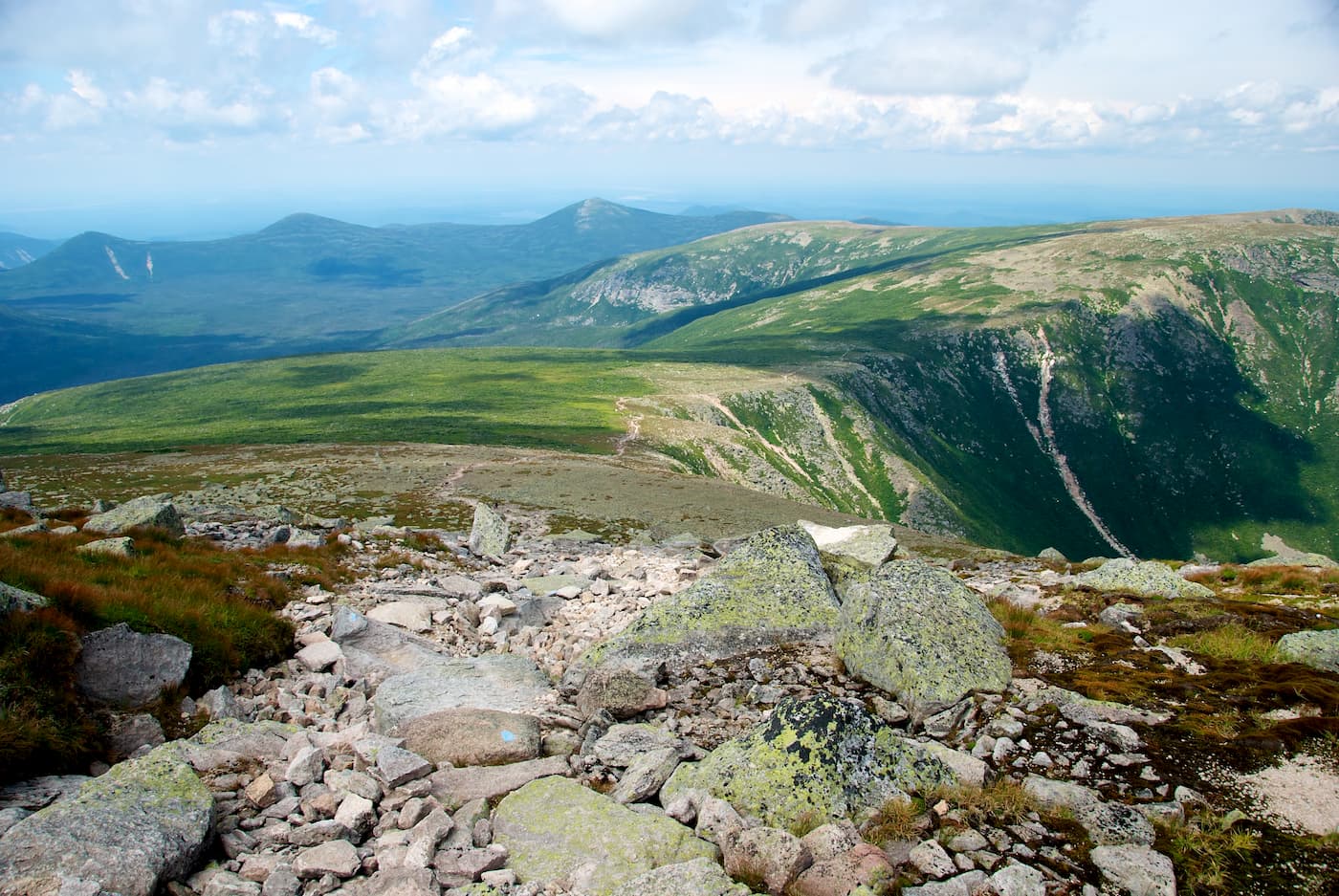 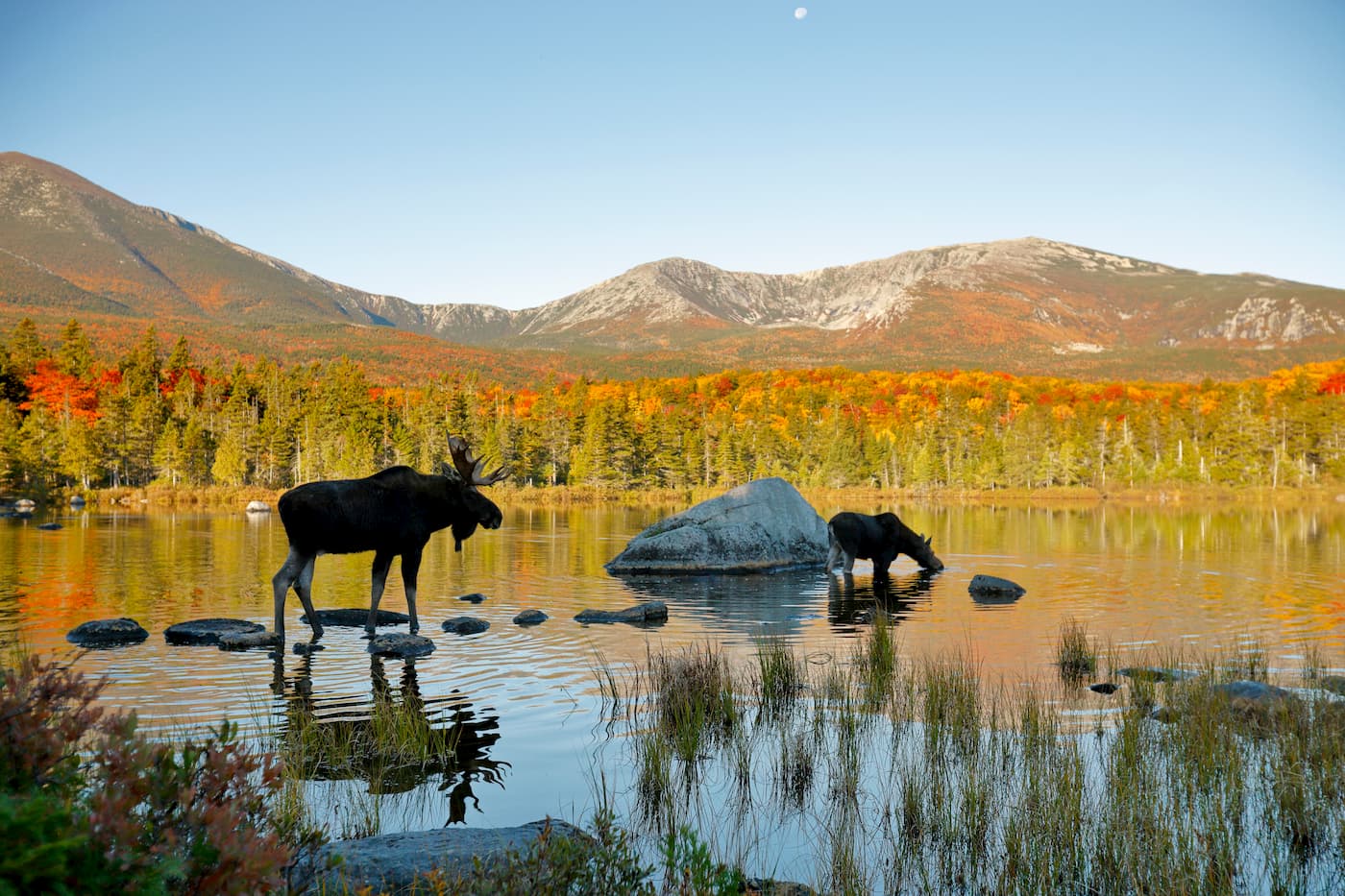 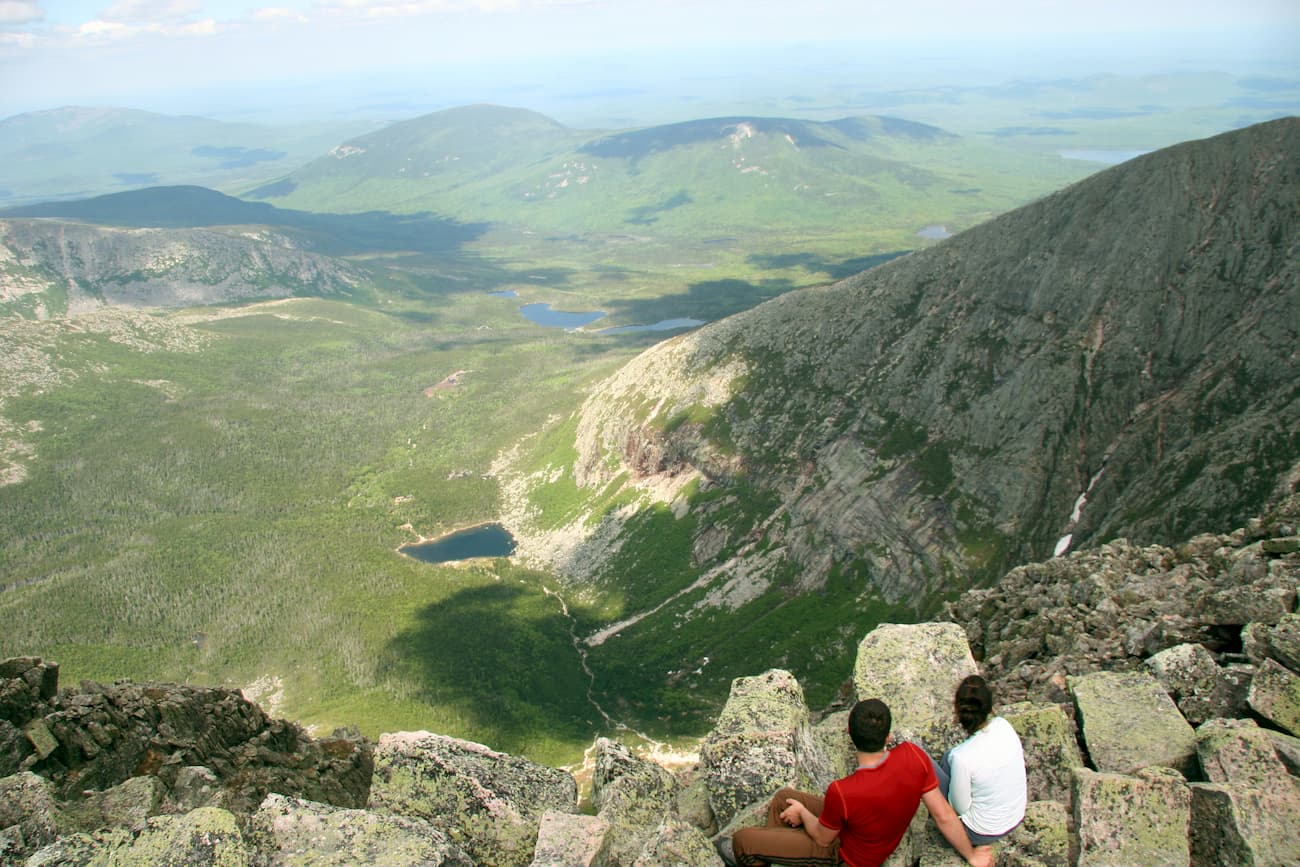 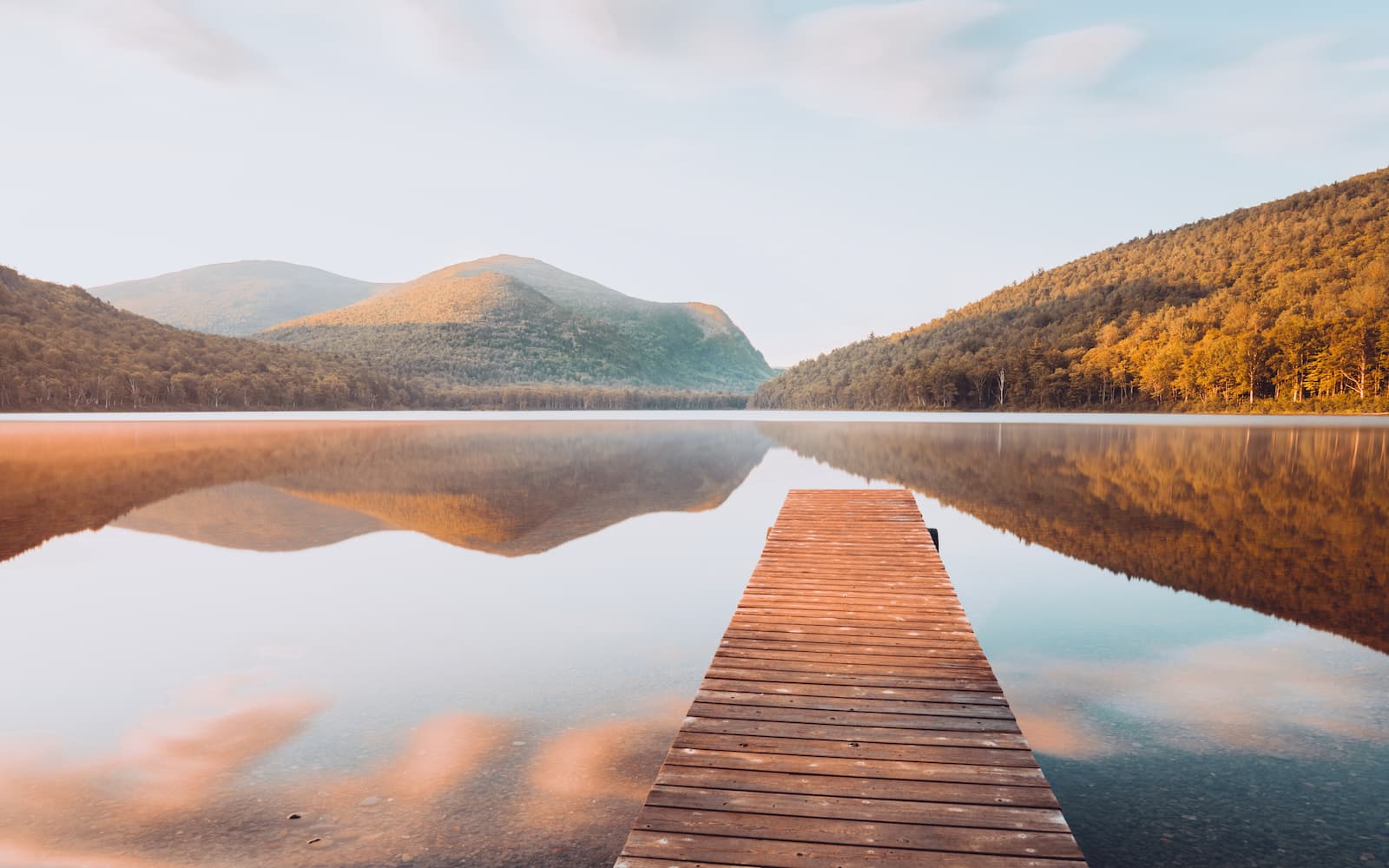