Le Grand Brazeau is a mountain range located in the southern reaches of Jasper National Park in the Canadian Rockies of western Alberta, Canada. There are 25 named peaks in Le Grand Brazeau. The range takes its name from its most prominent peak—Mount Brazeau—which, at an elevation of 3,470 m (11,380 ft) is an imposing presence, even amongst the other lofty peaks found in the 955 sq. km (360 sq. mi) range. 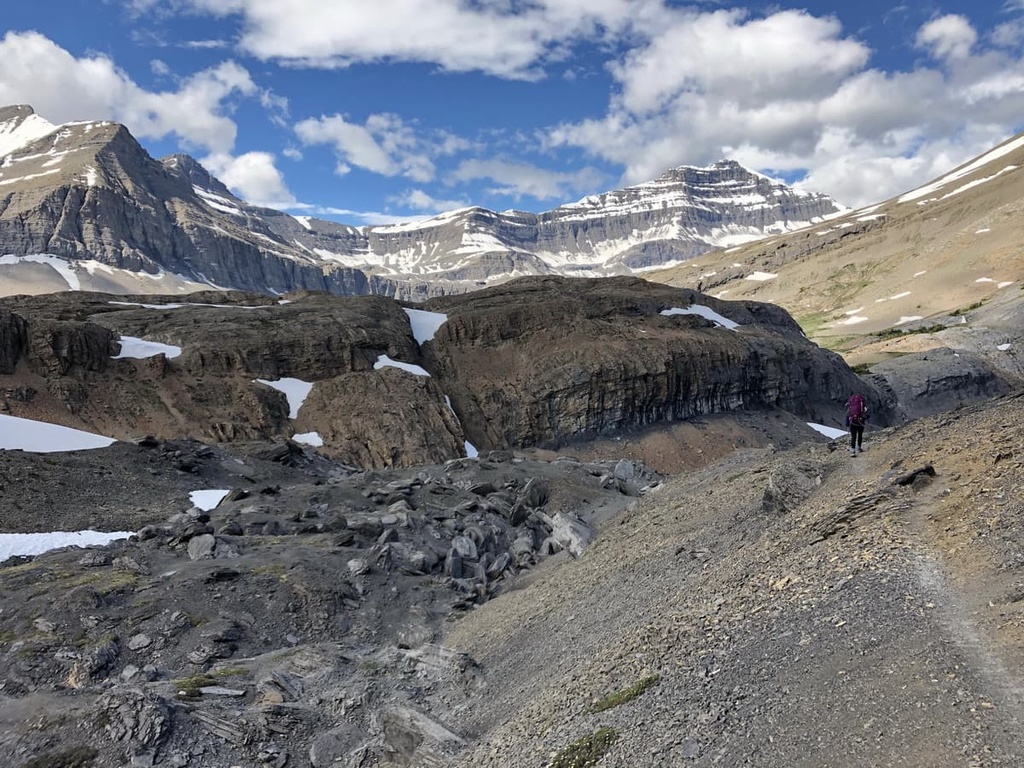 The range itself is located primarily in Jasper National Park near the park’s border with Banff to the south. It stretches northward toward the iconic Maligne Lake where the mountains start to transition into the Queen Elizabeth Range.

As it is located far from any major cities and highways, Le Grand Brazeau offers some of the most remote, wild, and beautiful landscapes in the Canadian Rockies. This makes it a popular destination for hikers, backpackers, and climbers looking to get off the beaten path.

The mountains of Le Grand Brazeau are composed mainly of limestone. They have a pale gray color, characteristic of the front range of the Canadian Rockies.

This limestone is a remnant of sediments that were deposited on the seafloor over 100 million years ago. During this time organic material from ancient marine life created lime mud on the seafloor that thickened and hardened into sheets of limestone. These layers of limestone have also preserved shells, bones, and other plant fossils that are found throughout the range to this day.

Snowmelt from the range is a significant source of water required for municipal and agricultural needs farther downstream in Alberta and Saskatchewan.

Le Grand Brazeau is composed of subalpine and alpine ecosystems. The subalpine zones of the range are limited to the region’s valley bottoms, such as the area along the Brazeau River.

Wildlife, including elk, moose, white-tailed deer, woodland caribou, bighorn sheep, and grizzly and black bears use these valley corridors for food, transportation, and shelter. Engelmann spruce, lodgepole pine, and subalpine fir crowd the valley bottoms in the range and they grow more twisted and stunted as you move toward the alpine zone.

The alpine is the most delicate and intricate ecosystem found in the Rockies. Plant life in the alpine is sparse, but some resilient wildflowers like purple saxifrage, purple-flowered beardtongue, moss campion, and mountain avens still dot the alpine meadows of Le Grand Brazeau in the summer months.

Ptarmigans, hoary marmots, and pikas—small, rodent-like mammals—are some of the few animals that make their homes in the alpine of Le Grand Brazeau.

There is evidence of human occupation in the valleys near Le Grand Brazeau dating back nearly 10,000 years. Several Athabaskan-speaking groups including the Sekani, Dane-zaa, and Tsuut’ina First Nations traditionally made seasonal trips to the valleys between the front ranges to hunt elk and moose.

The first recorded European to visit the region was David Thompson in 1810. Nearly 100 years later, as Europeans continued to settle throughout the region, Le Grand Brazeau was formally included in the Jasper Forest Reserve. This reserve later received national park status in 1930.

Le Grand Brazeau was named after Joseph Edward Brazeau, who provided translation services to the historic Palliser expedition. Led by Jon Palliser, this expedition traveled through the wildernesses of western Canada that were previously unknown to European settlers, including the areas that are now part of Jasper National Park.

The remoteness of the region and the limited road access to Le Grand Brazeau mean that options for day hikes in the range are fairly limited. But for those with more time to explore, the region boasts some of the best multi-day adventures in the Rockies.

Here are some of the best hikes in Le Grand Brazeau to check out during your next trip to the region.

The 80 km (51 mi) long Brazeau Loop takes ambitious hikers over three different mountain passes, through pristine alpine meadows, and along the stunning Brazeau Lake, one of the largest backcountry lakes in Canada.

Hikers on this route will start at the Nigel Pass trailhead at the northern edge of Banff National Park. The views of Mount Athabasca and the Brazeau River valley from Nigel Pass make it a worthy objective in its own right if you’re just looking for a day hike.

The full Brazeau Loop typically takes four or five days to complete. It is best attempted from late July onward to ensure a snow-free traverse over the trail’s high point at Jonas Pass.

This abridged, point-to-point variation of the Brazeau Loop takes hikers over Nigel and Jonas Passes before forking further north into Le Grand Brazeau. It continues to follow Poboktan Creek to the Sunwapta Station trailhead on the Icefields Parkway.

Mount Brazeau is considered one of the ‘easier’ 11,000+ ft (3,353 m) climbs in Alberta, making it popular with climbers and scramblers. But this hike is not to be taken lightly.

The two established ascent routes up Mount Brazeau often take two days to complete, and they involve glacier travel across the Brazeau Icefield. Climbers should be prepared for many crevasses and potential whiteout conditions on these routes.

Looking for a place to stay in the region around Le Grand Brazeau? Here are some of the best cities and resorts to visit near the range.

The idyllic mountain town of Jasper is the closest major center to Le Grand Brazeau and is an ideal basecamp for exploring the northern Rockies in Alberta. There are dozens of hotels in the town, like the historic Athabasca Hotel and Chateau Jasper. For something more rustic and cozy, cabin accommodations like the Tekarra Lodge abound.

There are several campgrounds located near Jasper as well, including the Whistlers Campground just to the south of the townsite. It offers convenient access for those looking to head south towards Le Grand Brazeau.

Keep in mind that Jasper is incredibly popular in the summer, so hotels and campgrounds are often fully booked months in advance. Be sure to plan your travels to the region well ahead of time to avoid disappointment.

Even if you’re traveling from Jasper, it still takes an hour or longer by car to reach the main trailheads in Le Grand Brazeau.

If a convenient launch point for mountain adventures is all you need, consider staying at Saskatchewan River Crossing, which is located at the junction of the Icefields Parkway and Highway 11 (the David Thompson Highway), mere minutes away from countless world-class hikes.

At Saskatchewan River Crossing, you can find a few restaurants, a general store, and the Crossing Resort, which offers accommodations for visitors. 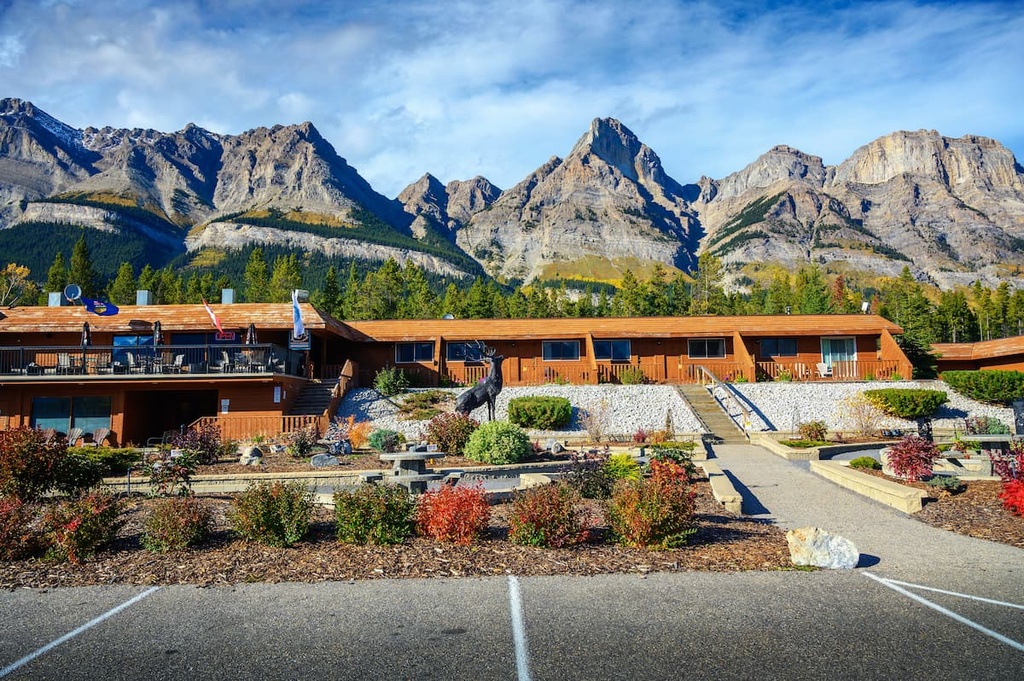 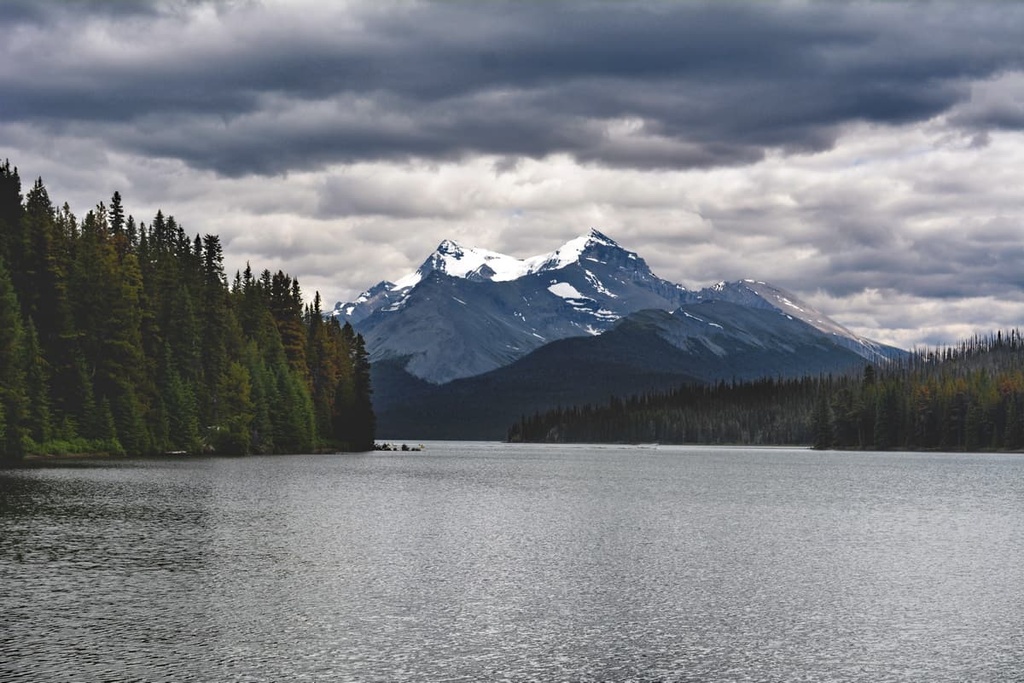 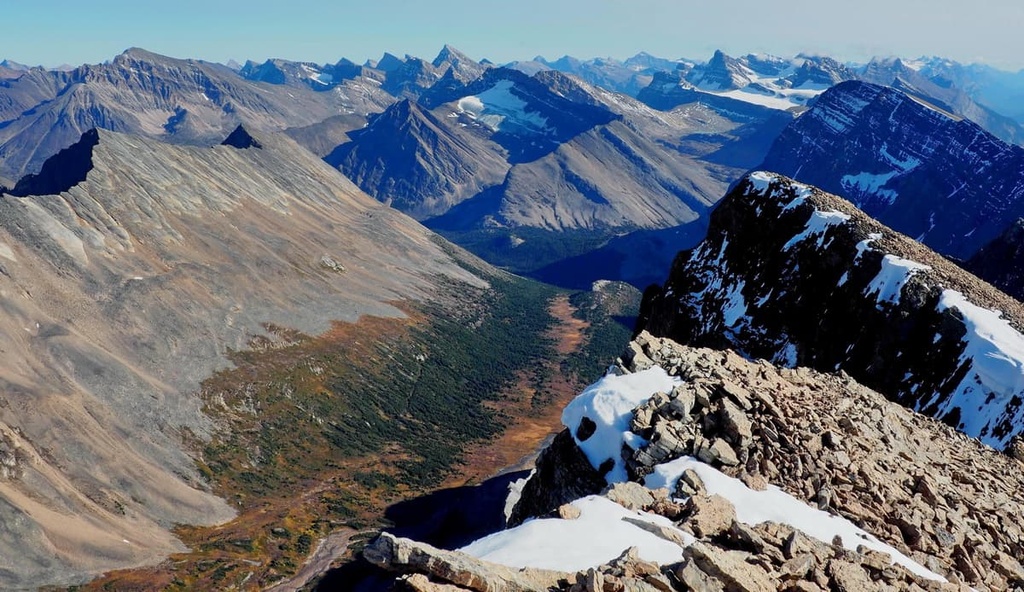 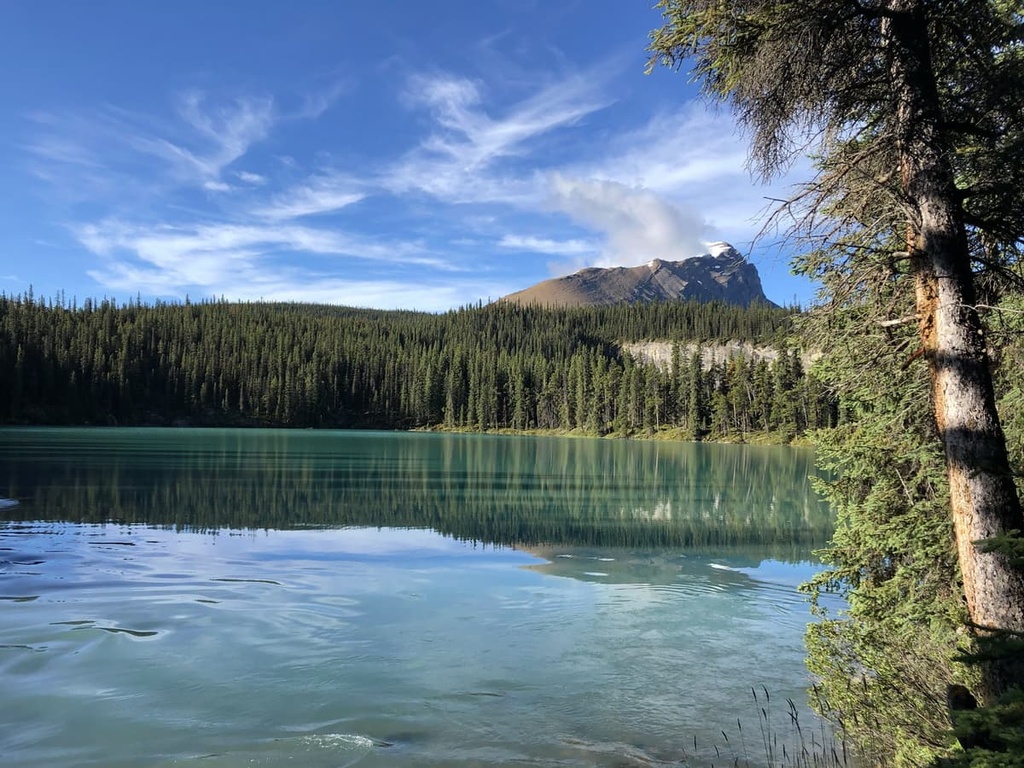 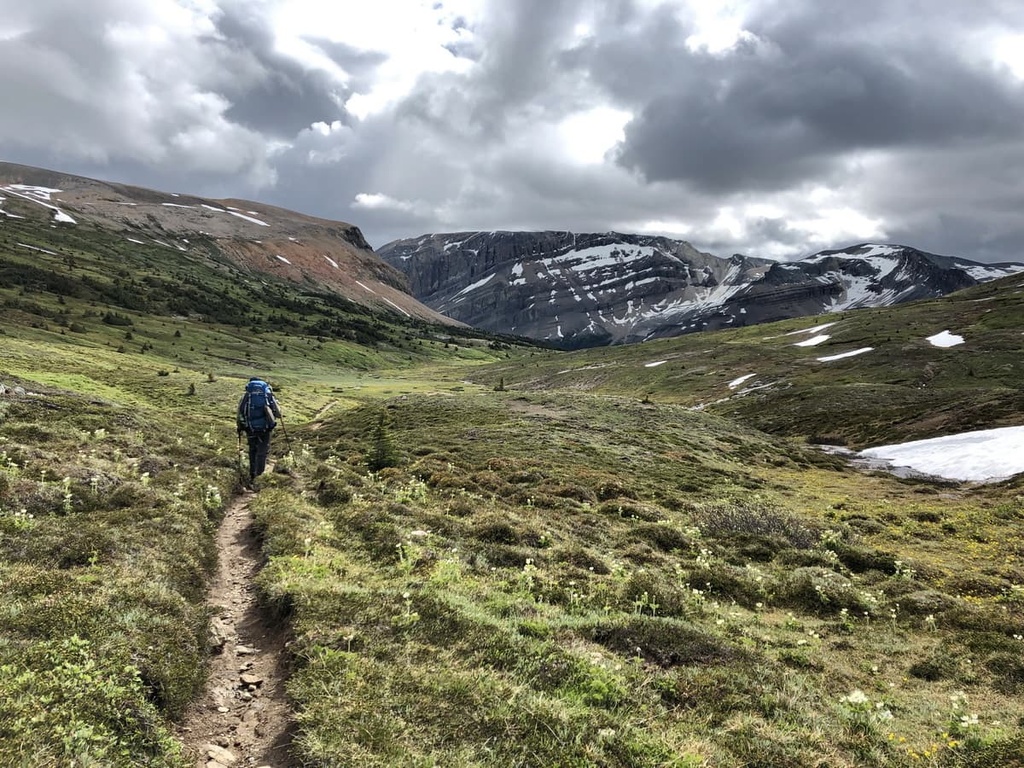 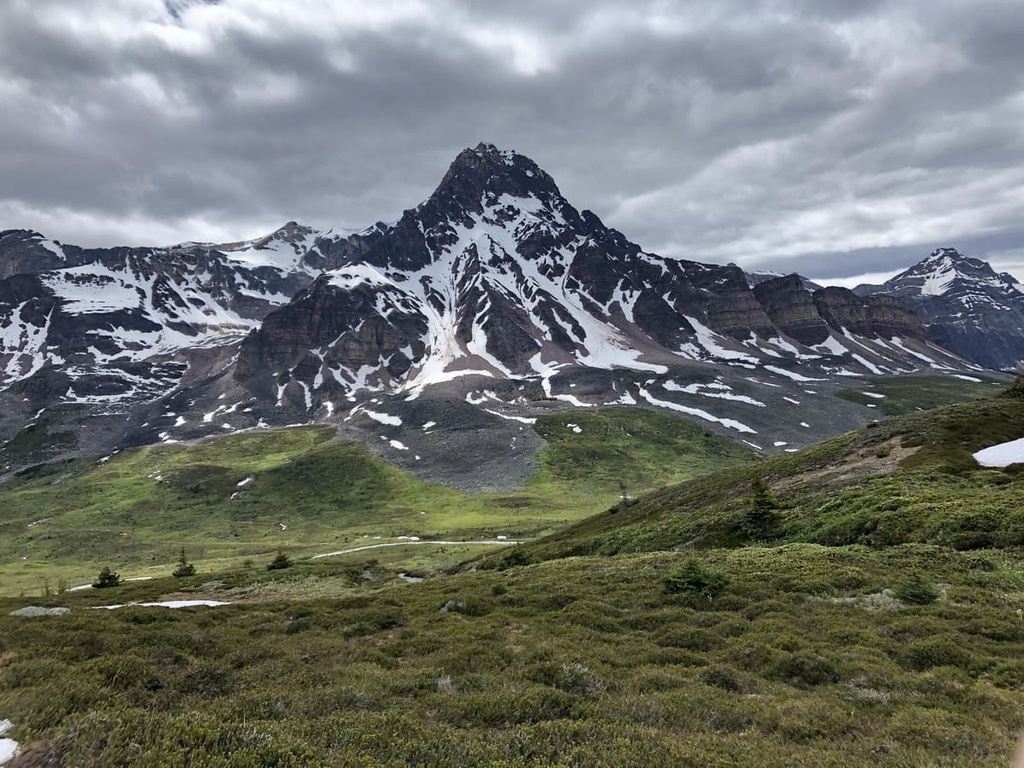