Wegelnburg map
Go to camera
Teleport
Zoom in
Zoom out

571 m
Elevation
Elevation is the altitude of a place
above sea level.

280 m
Prominence
Peak’s prominence is the least
vertical to be covered to get from the
summit to any other higher terrain.

Wegelnburg was founded by the Hohenstaufens in the 12th or 13th century. It had to protect the border of the Hohenstaufens’ territory. In 1272, the castle was destroyed because the castellan had committed a breach of the peace. The von Wegelnburg family rebuilt the castle.

In 1330 the Wegelnburg was pawned to the Palatinate and in 1417 it was given to the Duchy of Zweibrücken through barter. Because of the Treaty of Nijmegen the castle was destroyed by French troops under General Monclar in 1679. Owned by the Palatinate and then by Bavaria, the Wegelnburg was given to Rhineland-Palatinate and has been administered by its Castles Administration since 1963. During the restoration work from 1979 until 1982 the remains of the castle were saved and large amounts of rubble were removed.

Wegelnburg Castle was divided into three wards: a lower, middle and upper bailey, the lower bailey only being established on the western side. The internal gateway has been preserved and restored. Rock staircases, hewn into the sandstone rock, enable access to the upper ward. Niches, various timber holes, another stair and some renewed arches can be seen in the lower and middle wards.

The foundation walls on the sandstone rock are remarkable because of the smooth transition of the wall and the rock. Together with the rock caves they belong to the upper and middle bailey.
There's a trail leading to the summit. 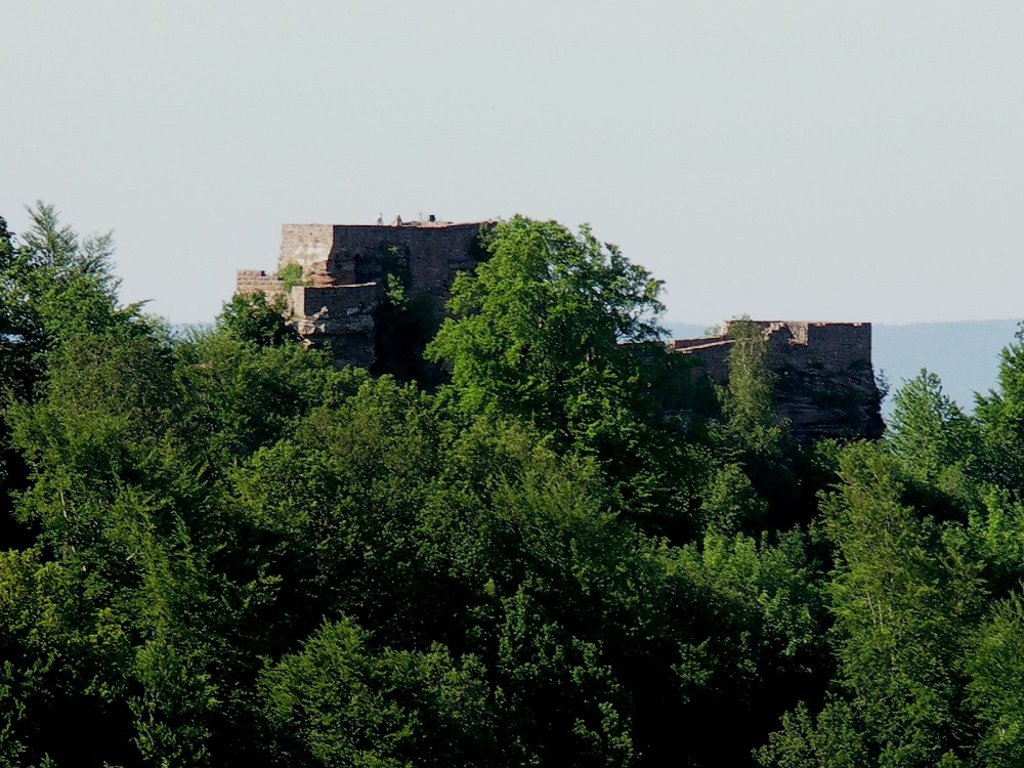 49.085225 N   7.913656 E
Nearest Higher Neighbor
Hohe Derst - 9.6 km E
El: 576 m / Prom: 280 m
Check out a downloadable 3D model of Wegelnburg area. A higher resolution model can be found in the PeakVisor mobile app.
Do you have photos of Wegelnburg or know something about it? Please let us know!