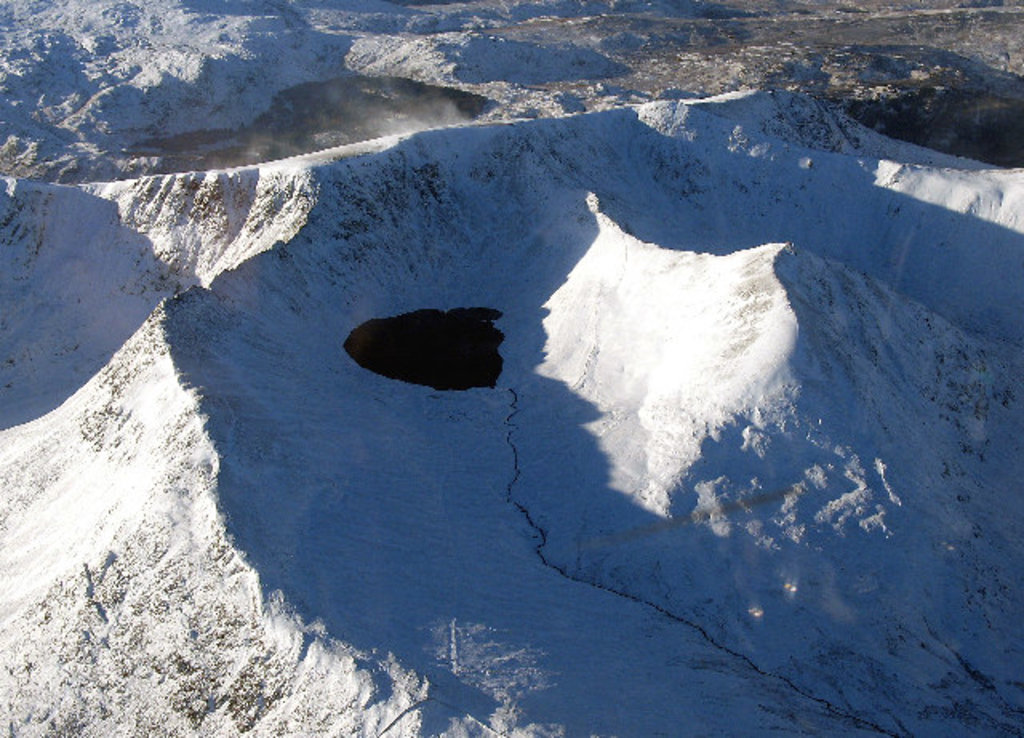 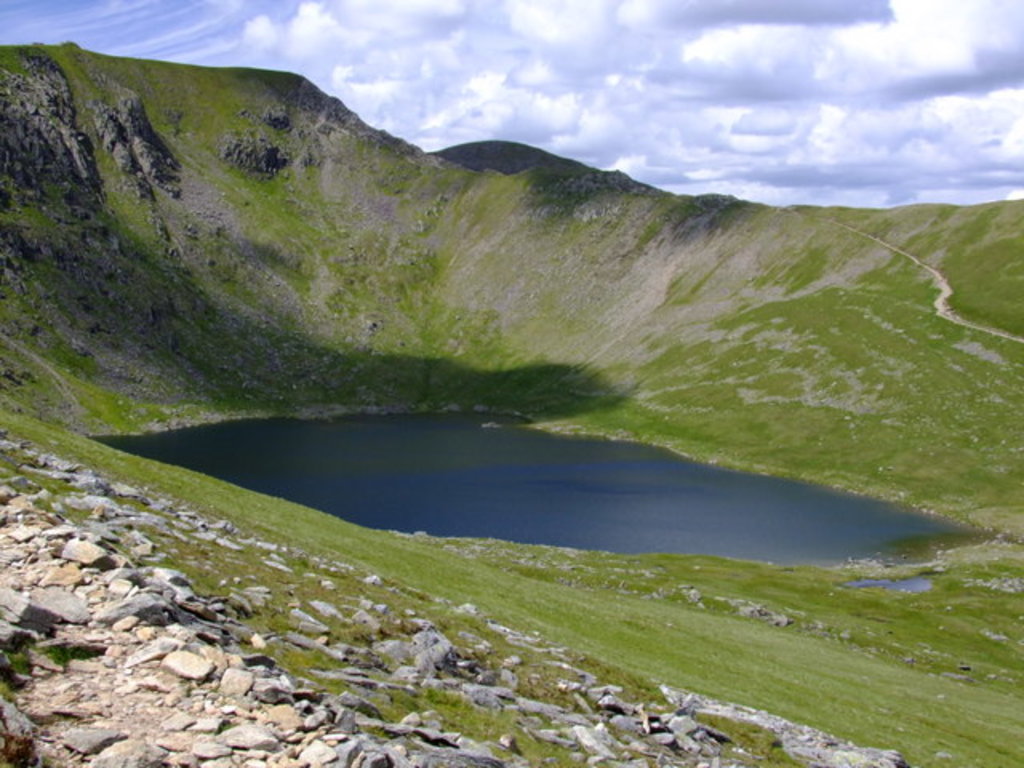 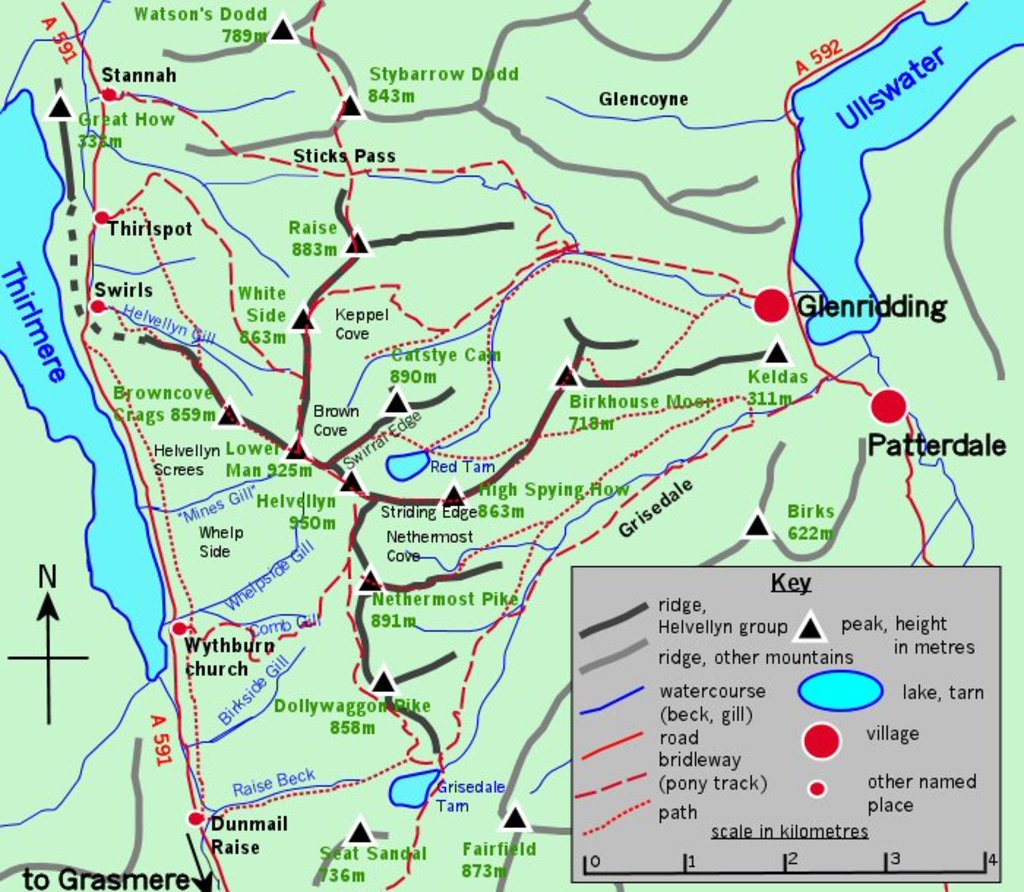 Show 3 photos
Add photo
950 m
Elevation
Elevation is the altitude of a place
above sea level.

710 m
Prominence
Peak’s prominence is the least
vertical to be covered to get from the
summit to any other higher terrain.

Helvellyn (pronunciation: /hɛlˈvɛ.lɪn/) (possible meaning: pale yellow moorland) is a mountain in the English Lake District, the highest point of the Helvellyn range, a north-south line of mountains to the north of Ambleside, between the lakes of Thirlmere and Ullswater.

Helvellyn is the third-highest point both in England and in the Lake District, and access to Helvellyn is easier than to the two higher peaks of Scafell Pike and Sca Fell. The scenery includes three deep glacial coves and two sharp-topped ridges on the eastern side (Striding Edge and Swirral Edge).

The volcanic rocks of which the mountain is made were formed in the caldera of an ancient volcano, many of them in violently explosive eruptions, about 450 million years ago during the Ordovician period. During the last ice age these rocks were carved by glaciers to create the landforms seen today.

Since the end of the last ice age, small populations of arctic-alpine plants have survived in favourable spots on rock ledges high in the eastern coves. Rare to Britain species of alpine butterfly, the mountain ringlet, also live on and around Helvellyn.

Mineral veins, some with deposits of the lead ore galena, do exist within Helvellyn's rocks, but attempts to find sufficient quantities of lead to be worth mining have not been successful.

Tourism has been a more successful industry in the area. For over two hundred years visitors have been drawn by the lake and mountain scenery of the Lake District, and many have made their way to the top of Helvellyn. Among the early visitors to Helvellyn were the poets Samuel Taylor Coleridge and William Wordsworth, both of whom lived nearby at one period. Many routes up the mountain are possible so that it may be approached from all directions. The view from the top is one of the most extensive over the Lake District, and on a clear day the view can also stretch from Scotland to Wales.

However, traversing the mountain is not without dangers; over the last two hundred years there have been a number of fatalities. The artist Charles Gough is more famous for his death on Striding Edge in 1805 than for what he achieved in his life.

Among many human feats upon the mountain, one of the strangest was the landing and take-off of a small aeroplane on the summit in 1926.
There's a hiking trail (T1) leading to the summit.