483 m
Elevation
Elevation is the altitude of a place
above sea level.

203 m
Prominence
Peak’s prominence is the least
vertical to be covered to get from the
summit to any other higher terrain.

Proportional Prominence 221 m
Location
35.232228 N  -81.276407 W
Crowders Mountain is one of two main peaks within Crowders Mountain State Park, the other peak being The Pinnacle. The park is located in the western Piedmont of North Carolina between the cities of King's Mountain and Gastonia or about 25 miles (40 km) west of Charlotte. Crowders Mountain abruptly rises nearly 800 feet (240 m) above the surrounding terrain, and has an elevation of 1,625 feet (495 m) above sea level.

Although stated as true on some sites, the mountain was not named after Ulrich Crowder [Krauter], a German merchant and farmer. In 1789, Ulrich purchased land much farther north of the mountain before moving west. The mountain is named for Crowders Creek, which originates near the base of the mountain. The original namesake of Crowders Creek is unknown, but mostly likely lived farther south along Crowders Creek. Crowders Mountain and The Pinnacle, located to the southwest, once served as markers to separate the hunting grounds of the Catawba and Cherokee Indians.

In the early 1970s a mining company began doing exploratory sampling of areas along what is now the Backside Trail with the intent of purchasing the minerals rights to excavate the mountain for kyanite, barite, and iron. This led local concerned citizens, educational institutions, and local governments to join together and convince state government pursue the creation of a state park in order to protect the area.

In 1973 the State of North Carolina created Crowders Mountain State Park. It opened to the public in 1974. Crowders Mountain proper was added to the new park in 1978. The Pinnacle was added in 1987. In the year 2000, 2000+ acres were purchased. This purchase brought the entire ridge line of Kings Mountain into the park and took park boundaries to the North Carolina/South Carolina state line. Both monadnocks present sheer rock cliffs which are 100–150 feet (30–46 m) in height. The cliffs of Crowders Mountain are popular among rock climbers. Rock climbing is no longer permitted on The Pinnacle. Hiking trails lead to both summits, from which it is possible to view the skyscrapers of nearby Charlotte, North Carolina, on a clear day.
There's a trail called Tower Trail leading to the summit. 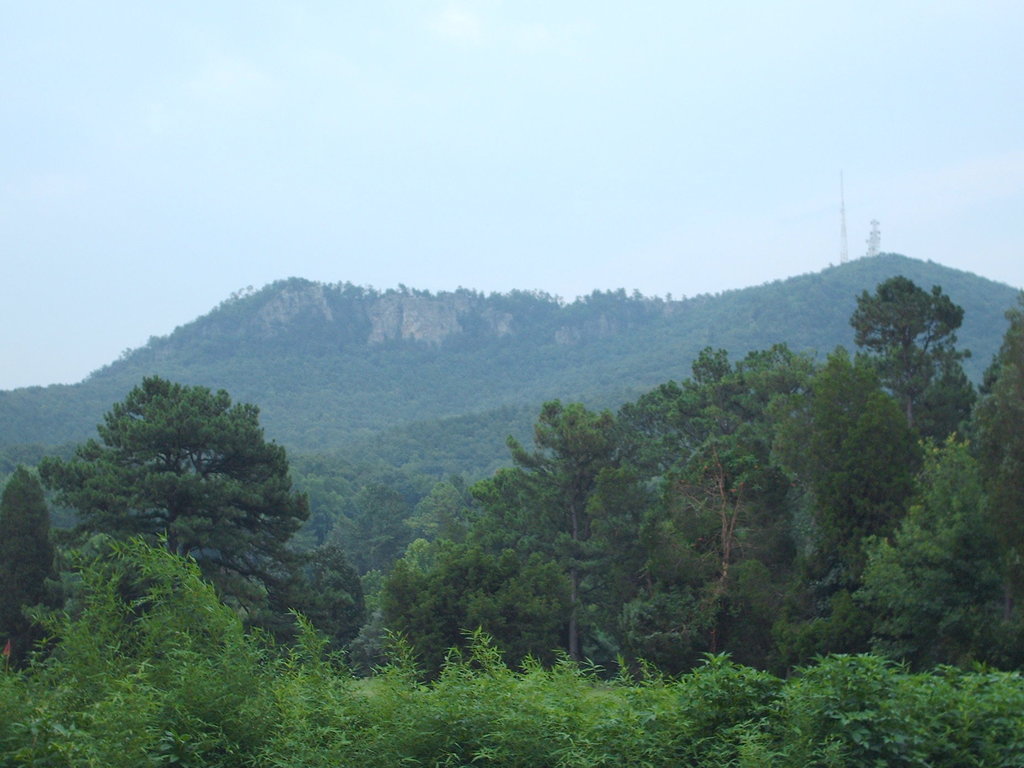 35.208056 N   -81.312222 W
Nearest Higher Neighbor
Kings Pinnacle - 4.3 km SW
El: 520 m / Prom: 238 m
Check out a downloadable 3D model of Crowders Mountain area. A higher resolution model can be found in the PeakVisor mobile app.
Do you have photos of Crowders Mountain or know something about it? Please let us know!