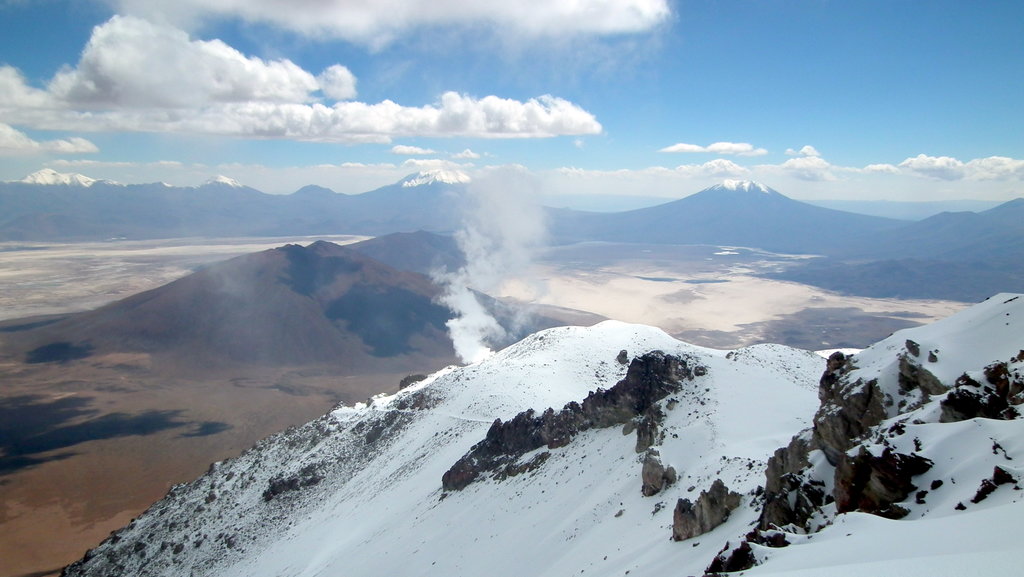 Add photo
6 023 m
Elevation
Elevation is the altitude of a place
above sea level.

1 932 m
Prominence
Peak’s prominence is the least
vertical to be covered to get from the
summit to any other higher terrain.

Proportional Prominence 4 761 m
Ultra
Mountains with prominence of 1 ⁠500 ⁠m / 4 ⁠921 ⁠ft or more.
Volcano
Most commonly a conical hill or mountain built around a vent that connects with reservoirs of molten rock below the surface of the Earth.
Location
-21.546925 S  -68.522475 W

Palpana (from pparpana, ram) is a volcano in the Andes of Chile. It has a summit elevation of 6,040 metres above sea level and is part of the dividing range between Upper Loa River basin and Salar de Ascotán basin. Together with Inacaliri and Azufre, it forms a 50 kilometres (31 mi) long volcanic chain constructed along the Inacaliri lineament. The volcano rises above an ignimbrite plain that in the area reaches an altitude of 3,700 metres (12,100 ft).

A lava dome cluster is recognizable in the central sector of the volcano, forming a flat area with a surface of 4.7 square kilometres (1.8 sq mi). The volcano contains basaltic rocks with an extrusion formed from more silicic rock. Layers of mafic andesite, scoria and some pumice extend outwards away from the central sector. The volcano rises 6,023 metres (19,760 ft) above its terrain and its average summit slope is 26°. The western flank underwent a collapse, leaving a 2.9 kilometres (1.8 mi) wide and 5.9 kilometres (3.7 mi) long scar and a deposit at the volcano's foot. Olivine and plagioclase phenocrysts are found in the andesites, the overall SiO2 content is 57.6-58.9% in samples from the southern ridge. The volcano probably formed in a short timespan, given the montonous composition and form.

The volcano is no more than 1-2 mya old, but there is no evidence of postglacial material and erosion has carved radial ridges into the volcano. Precise dating methods performed on the southeastern flank have found ages of 3.65±0.15 mya and 3.81±0.30 for lavas and scoria. The snowline altitude in the area is 5,900–6,000 metres (19,400–19,700 ft) Four moraine stages are found on the mountain, with the lowest moraines on the southern flank at 4,200 metres (13,800 ft) altitude. Nowadays, block glaciers have been identified in the area, one of which is found at 5,300 metres (17,400 ft). The mountain is also one of the headwaters of the Loa River, and water was transferred from Palpana to Antofagasta by pipeline. A minor vegetation cover of 20-25% of the surface is present.