The Wichita Mountains National Wildlife Refuge (NWR) is located in the southwestern corner of the US state of Oklahoma. There are 43 named mountains in the wildlife refuge, the highest and most prominent of which is Mount Pinchot at 2,467 ft (752 m) elevation and with 935 ft (285 m) prominence. However, Mount Pinchot is closed to the public. Mount Scott is the highest and most prominent accessible peak in the refuge with an elevation of 2,464 ft (751 m) and a prominence of 827 ft (252 m). 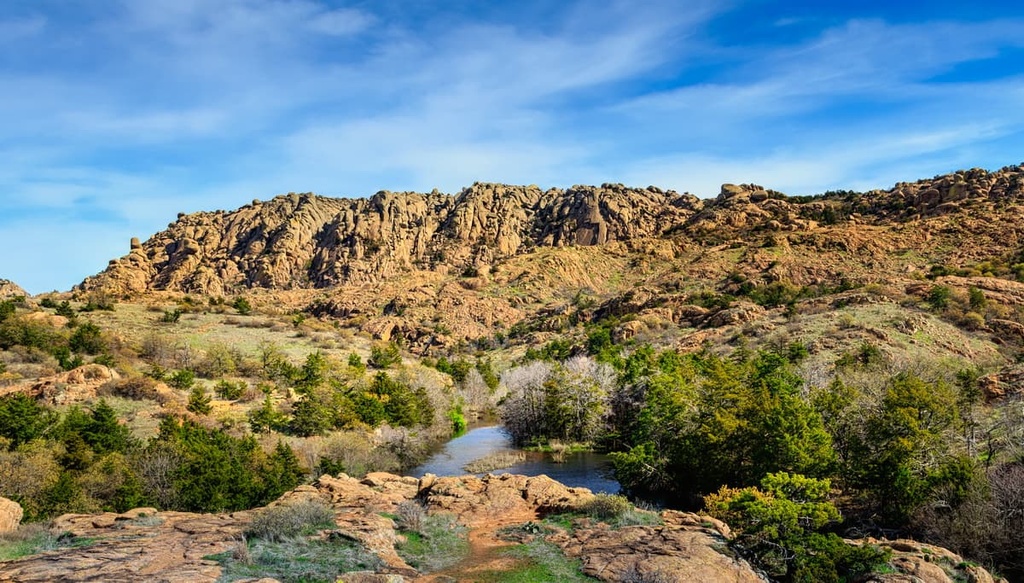 Located in Comanche County in southwestern Oklahoma, the Wichita Mountains National Wildlife Refuge protects 59,020 acres (23,855 ha) of land for the purpose of maintaining habitats and breeding grounds for local wildlife.

The Wichita Mountains NWR is one of the longest-standing wildlife refuges in the country. It was first set aside as a conservation area in 1901 and is currently managed by the US Fish and Wildlife Service.

The Wichita Mountains are an old mountain range composed mainly of granite, rhyolite, and gabbro, all of which solidified beneath the surface of the Earth roughly 525 million years ago.

These hardened rocks were uplifted between 330 and 290 million years ago to form mountains that were much higher than they are today. Over the course of millions of years, the elements have weathered these mountains down to their current elevations.

Granite, limestone, dolomite, sand, and gravel are major components of the Wichita Mountains. Most of the granite that is mined in Oklahoma comes from these mountains. Some iron ore was also mined here in the past and the region experienced a brief gold rush from 1901 to 1904.

The Wichita Mountains NWR boasts rich habitats of mixed-grass prairie, grasslands, granite mountains, freshwater lakes, and streams as well as an abundance of plant and animal life. The refuge is home to 806 plant species, numerous mammal and reptile species, and over 275 bird species that live, migrate through, or nest in the area.

The wildlife refuge is perhaps best known for its roaming herds of bison, longhorn cattle, and Rocky Mountain elk. Besides its function of preserving vital habitat for local wildlife, the refuge played an active role in the protection and, in some cases, reintroduction, of bison, white-tailed deer, Rocky Mountain elk, North American river otter, black-tailed prairie dog, and black-capped vireo populations in the region.

Habitats and animal populations in the wildlife refuge are managed through prescribed fires, invasive species control, and regulated hunting.

Invasive species found within the wildlife refuge include feral hogs and several plants, such as red cedar, common mullein, sweet clover, and prickly lettuce. These invasive plant species are monitored throughout the wildlife refuge and then manually or chemically removed as needed.

The US Fish & Wildlife Service also monitors ungulate herd sizes and the carrying capacity of the land within the national wildlife refuge.

They issue hunting tags to keep elk and deer populations in check, relocate bison when herd size exceeds its limit, and send longhorn cattle to auction when their numbers grow too high. Grazing limits are also set in place to ensure that only about one-third of the available grassland in the refuge is grazed each year.

The refuge was initially established as a forest reserve in 1901 by President William McKinley. In 1905, it was redesignated as the Wichita Forest and Game Preserve by President Theodore Roosevelt.

A few years later, in 1907, bison were reintroduced to the Wichita Mountains, and in 1908, a Rocky Mountain elk herd was established in the preserve. Longhorn cattle were then introduced to the area in 1927.

By 1936, management of the preserve was transferred to the Bureau of Biological Survey, which was one of the handful of agencies that eventually became the US Fish and Wildlife Service. Not long afterward, the region was renamed the Wichita Mountains Wildlife Refuge and it joined the rest of the ​​National Wildlife Refuge System in the US.

The Wichita Mountains National Wildlife Refuge features a series of trails ranging from easy to moderate. While in the refuge, you can also stop by Osage Lake or Lake Elmer Thomas for some kayaking and fishing. Or you can drive the paved road to the summit of Mount Scott for a sweeping view of the Oklahoma landscape.

Those feeling more adventurous can venture into Charon’s Garden Wilderness Area. Trails in the area begin at the Sunset Picnic Area. Only 10 backcountry packing permits are offered in the wilderness for each three-day period. However, day hikers in the wilderness area do not need a permit.

As a national wildlife refuge, there are fairly strict rules on recreation in the area. Be sure to check with the US Fish and Wildlife Service via the refuge's official website to ensure that you always comply with regulations during your adventures.

With that in mind, here’s a quick look at some of the best hikes in the Wichita Mountains Wildlife Refuge that you can check out during your next trip to the region.

There are a handful of trails located near the refuge’s visitor center. You can get a complete list of the refuge’s trails at the refuge’s website or you can pick up an informational pamphlet at any of the entrance gates in the area.

Some of the best hikes in the refuge include:

There are a handful of trails in the Charon’s Garden Wilderness Area, most of which are unofficial paths that are unmaintained.

If you’re looking for a maintained trail in the wilderness, you can take the Charon’s Garden Trail. This hike is 2.4 mi (3.9 km) long and it begins at Sunset Picnic Area. The trail eventually makes its way to the Treasure Lake parking area. It is considered a difficult trail as it cuts across Charon’s Garden Wilderness Area.

There are also backcountry camping opportunities in the Charon’s Garden Wilderness Area. For overnight stays in the wilderness, you will need a permit from the US Fish and Wildlife Service.

Lawton is the closest town to the Wichita Mountains NWR. Oklahoma City and Wichita Falls, Texas, are both larger cities that are located within reasonable driving distance of the refuge.

Here are some of the best cities and towns to check out during your next adventure in the Wichita Mountains National Wildlife Refuge.

Lawton, a city of 94,000 people, is located a 35-minute drive from the wildlife refuge. The town is home to Fort Sill, a US Army base, which was established in 1868 for cavalry troops.

While visiting Lawton, be sure to explore the Museum of the Great Plains as well as the Comanche National Museum and Cultural Center to learn more about the region’s rich history. Additionally, visitors to Lawton can drive the 3.5 mi (5.6 km) road to the summit of the second-tallest mountain in the Wichita Mountains, Mount Scott. Fishing and boating are both possible at the nearby Lake Elmer Thomas Recreation Area and Medicine Park, too.

One can find the standard range of accommodation in Lawton, including hotels, motels, B&Bs, RV parks, and campgrounds. The many restaurants in town also offer up an array of American classics as well as a variety of other cuisines.

Oklahoma City, which has a population of about 645,000 people, is located just under two hours away from the wildlife refuge. Known as the “Horse Show Capital of the World,” Oklahoma City boasts strong cowboy vibes with a modern flair.

Museums exploring everything from art and cowboys to banjos will satiate a culture-loving visitor in Oklahoma City. A trip to one of the many theme or water parks in the city or to Lake Hefner for sailing or kitesurfing is a perfect choice for adventure during a hot summer’s day in the region.

Within Oklahoma City, you can find 80 miles (129 km) of trails for bikers and runners. Stinchcomb Wildlife Refuge and Lake Overholser lie just to the west of the city. Martin Nature Park is smaller than the wildlife refuge but it offers a breath of fresh air close to the heart of the city itself.

While most cuisines can be found in Oklahoma City, this city with Old West roots does steakhouses, barbecue, grill houses, and breweries like no other. Accommodation options in the city run the gamut from luxury resorts and historic hotels to quirky hostels and B&Bs. There are also budget motels, campgrounds, and RV parks in and around Oklahoma City that cater to visitors.

Located only one hour and 20 minutes away from the wildlife refuge, the city of Wichita Falls, Texas, is a community of around 104,000 people. Its downtown area is filled with art studios and boutiques as well as theaters that host plays, dance performances, and symphony orchestras.

To get acquainted with Wichita Falls, be sure to visit the River Bend Nature Center or the Museum of North Texas History upon arrival. Alternatively, you can escape the city and check out the nearby Lake Arrowhead State Park to go fishing, swimming, camping, and boating during your trip to the region.

Wichita Falls offers all forms of hotels, motels, B&Bs, RV parks, and campgrounds for visitors to choose from. The dining scene in the city is excellent, too, as the region is home to an abundance of classic Texas steakhouses and barbecue joints.

How to Get to the Wichita Mountains National Wildlife Refuge

To get to the Wichita Mountains National Wildlife Refuge from I-44, take exit 45 to Highway 49. Drive west for 7 mi (11.3 km) until you reach the refuge gate or 14 mi (22.5 km) to the visitor center. If you’re coming from Highway 62, take Highway 115 off of the Cache exit and continue north to the refuge gate.

Leaflets are available at each of the refuge’s gates with maps and information. There are no entrance fees at the wildlife refuge, though the refuge gates are only open from sunrise to sunset.

When you arrive at the Wichita Mountains National Wildlife Refuge, be sure to check in at the awesome visitor and education center before starting your adventure. 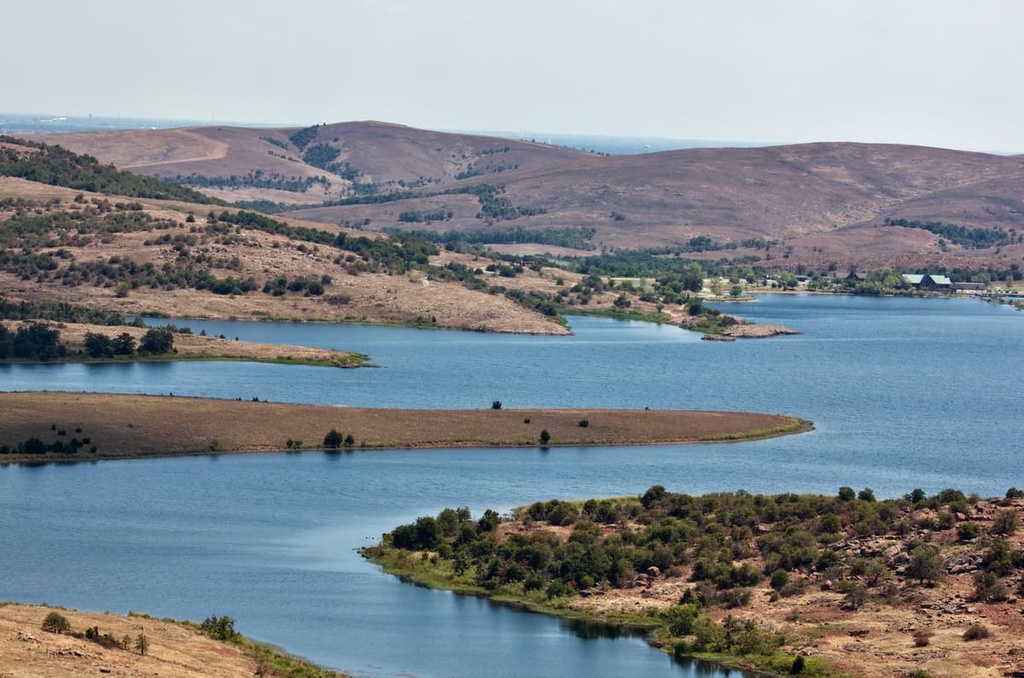 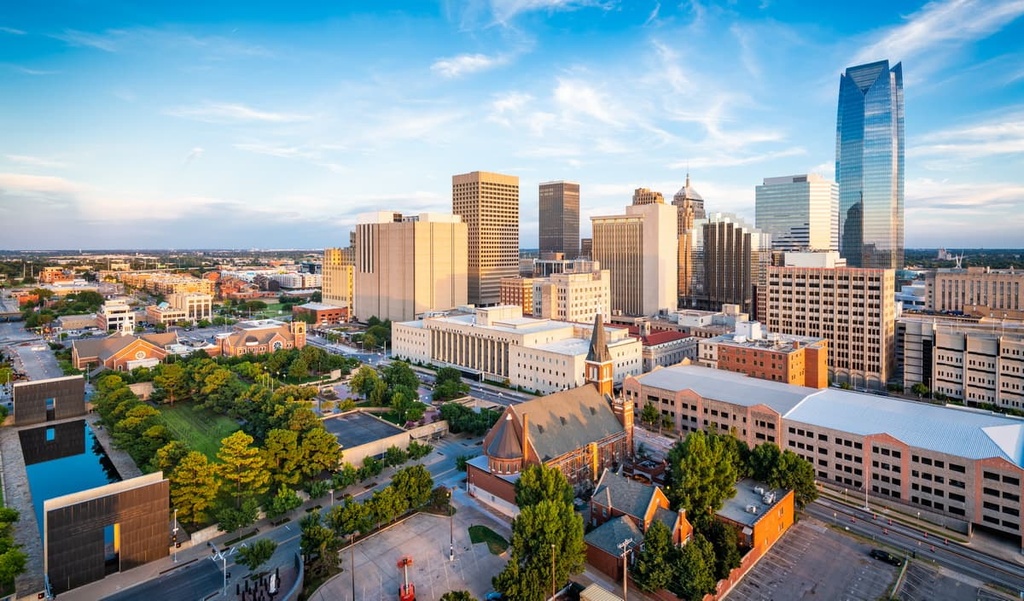 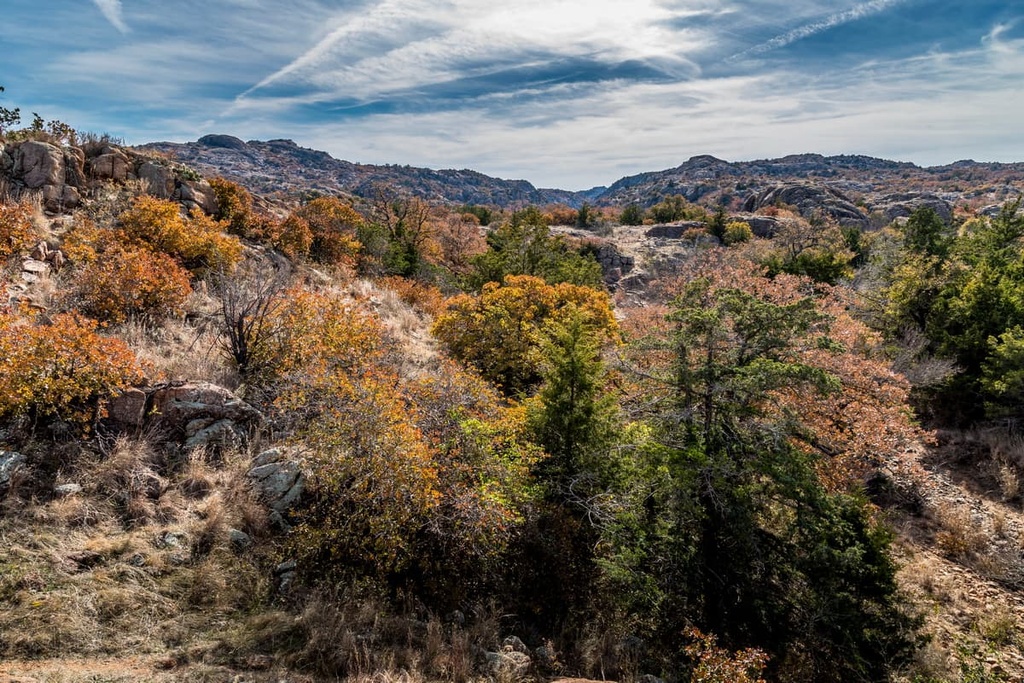 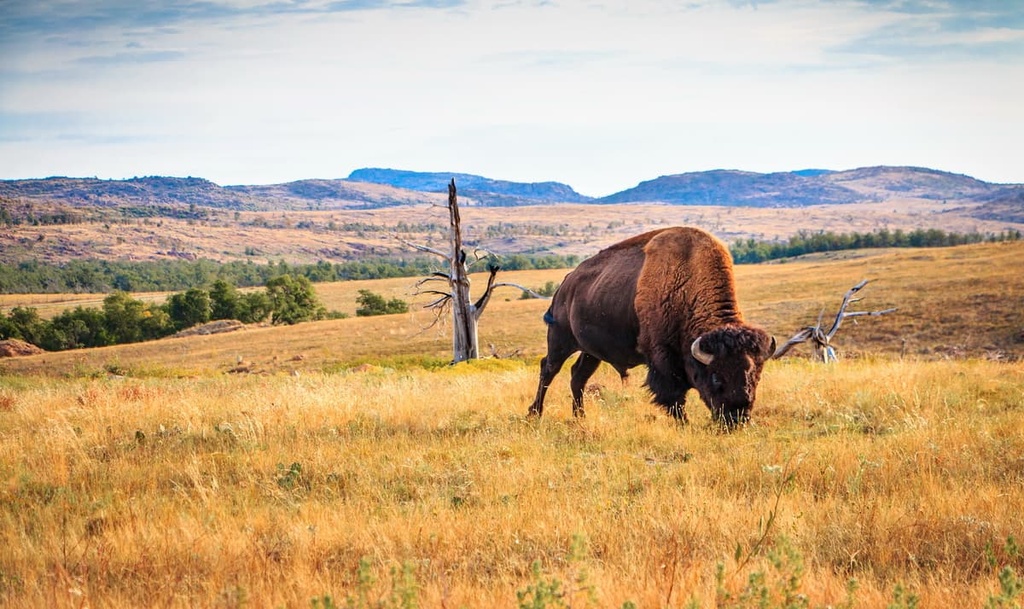 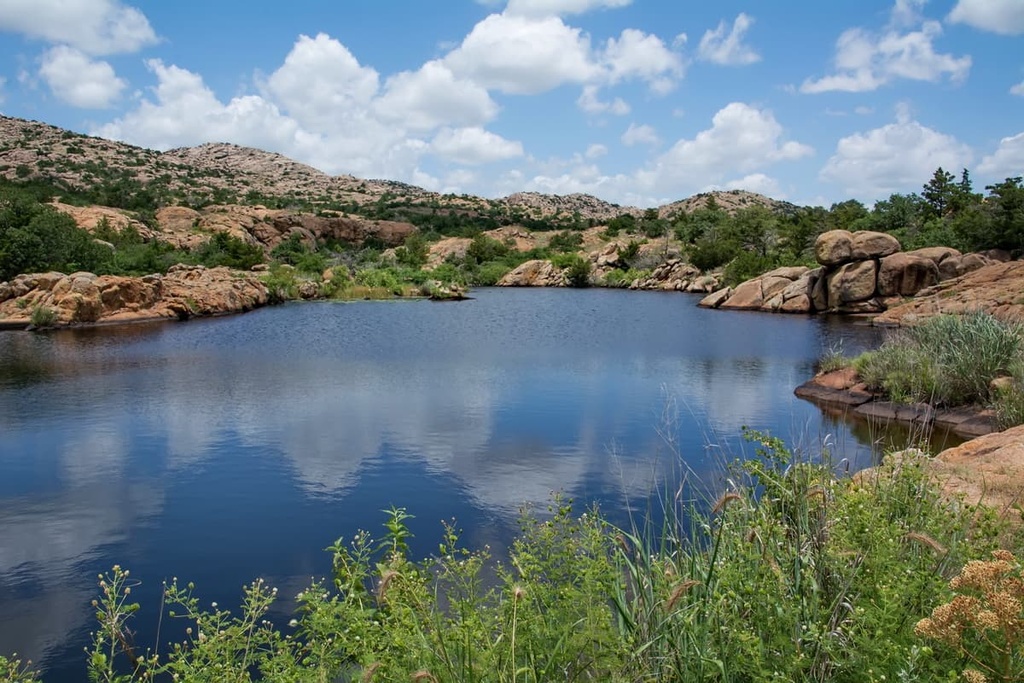 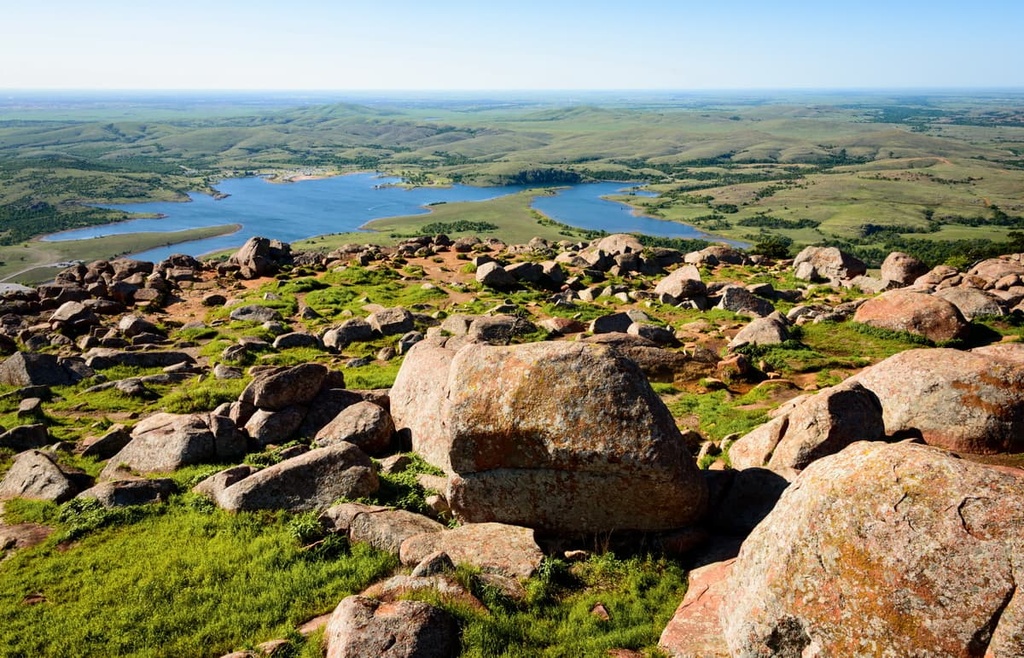