The Provence Alps and Prealps are a mountain range in the south-western part of the Alps, located in the Provence-Alpes-Côte d’Azur region. The region is divided into the departments of Vaucluse, Alpes-Maritimes and Alpes-de-Haute-Provence. The mountain range encompasses the south-western area of the French Prealps, spanning from Gap in the north to Nice in the south east. There are 413 named mountains in the Provence Alps and Prealps region, with the most prominent being that of Mont Ventoux.

At 2961m, the highest peak of the Provence Alps and Prealps is the Tête de l’Estrop, located between the French communes of Prads-Haute-Bléone and Méolans-Revel. It can be found within the trio of towns of Digne-les-Bains to the south west, Gap to the north west and Barcelonnette to the north east. It can be seen best from the south and the west, but from the east and the north, the summit can be difficult to identify.

Arguably the most famous of the peaks within the area, despite not being the highest peak, is Mont Ventoux (1909m). Nonetheless the ‘Giant of Provence’ dominates the horizon, at some distance from the closest mountain, and is visible from afar in each direction. Through its frequent inclusion in the Tour de France cycle race it has gained both fame and notoriety as a result of the death of Tom Simpson on 13th July 1967 on its slopes. Amongst the moonlike limestone that dominates, there is now a shrine for Simpson within touching distance of the radio tower at the summit.

The absence of high mountains has implications for the quantity of chairlifts and cable cars. Mont Ventoux only has a small collection of pole lifts active during the winter. To the west of the Tête de l’Estrop is the resort of La Foux d’Allos in the Allos valley. In this small winter resort there are cable cars which climb up to the ridge of the Baisse de l’Aiguille. From here you will find views of the Tête de l’Estrop and also views of the Allos valley below. 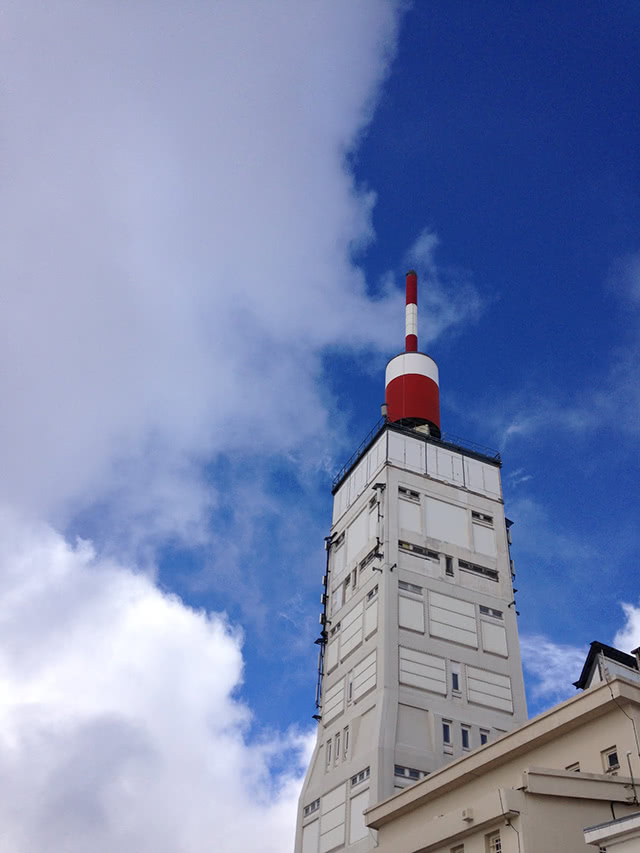 The radio tower at the summit of Mont Ventoux 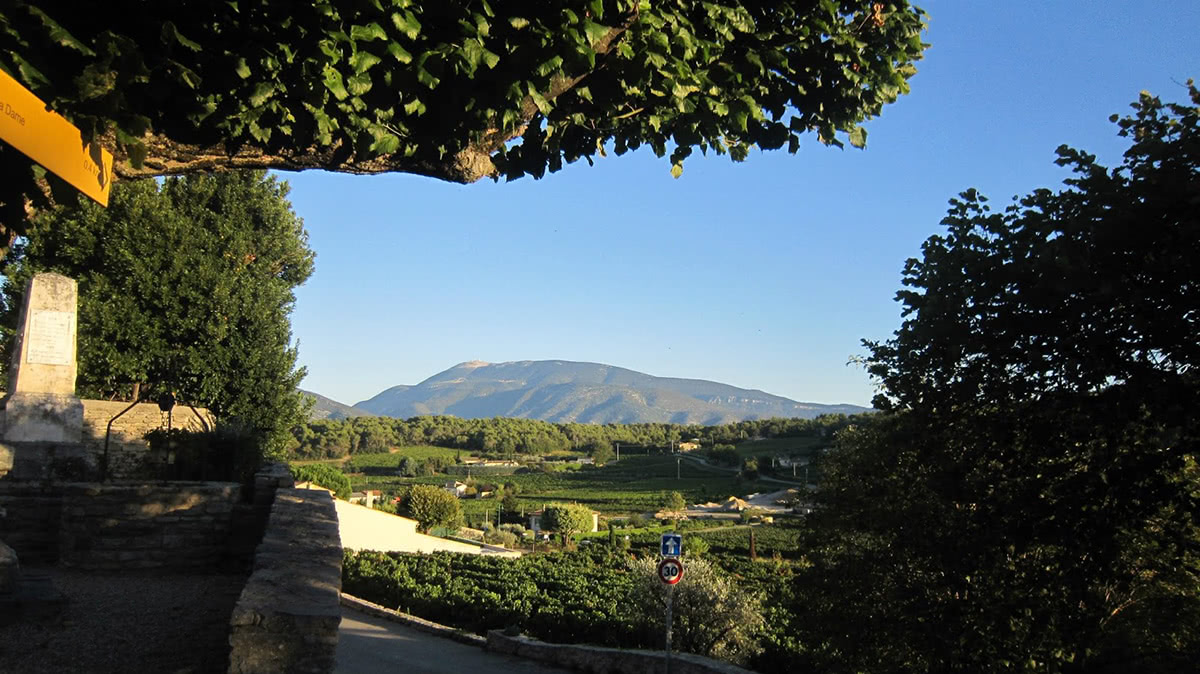 Mont Ventoux as seen from Faucon, a commune in the Vaucluse department

Tete de l’Estrop (2961m) - Starting from the refuge of the Estrop, there is no longer a path, but cairns (piles of stones) which indicate the path to the summit. Following the trail to the west the alpine pastures in the valley are quickly replaced by more rugged rocks. From here continue to climb until you arrive on a plateau. You will be able to see the summit and its lunar landscape. The route from the refuge is 9.81km in length with a total of 1065m of vertical elevation. (Est. time 5h20) As this route begins at the refuge, you will equally need to make provisions to climb to the refuge the previous day, for this reason, this hike is recommended for experienced alpinists with several days required to complete this ascension in full. 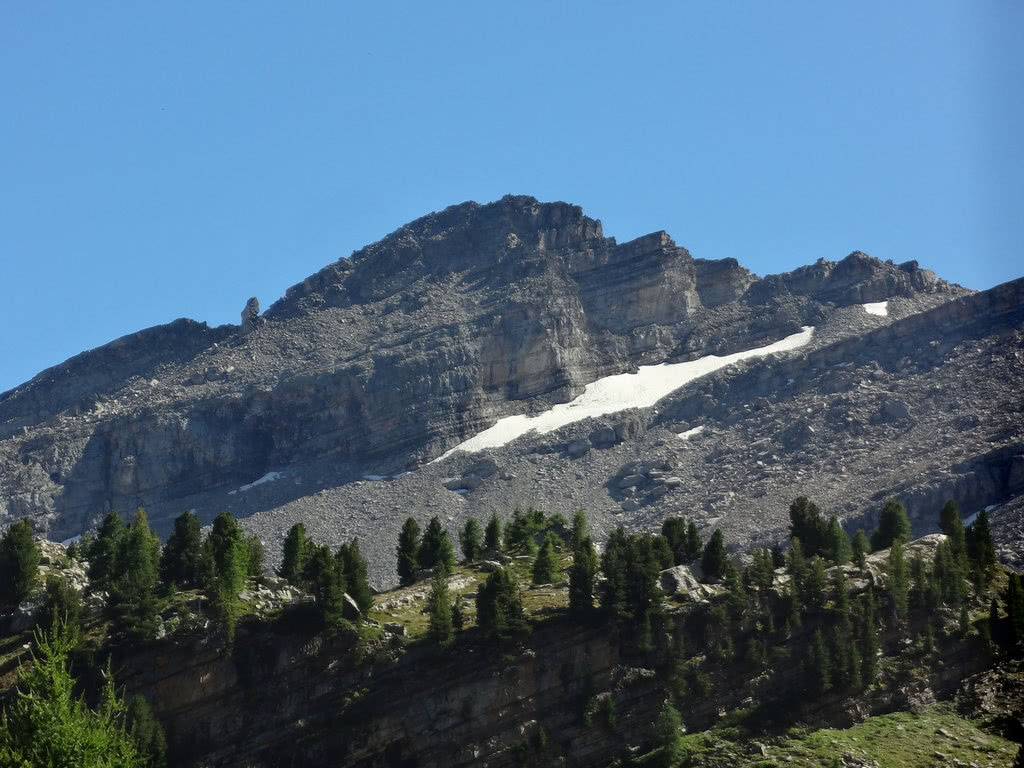 Mont Ventoux (1909m) - Starting from Mont Serein at 1450m altitude on the northern ascent of the mountain, a very nice loop takes you to the summit returning via the ridge. The views from the summit are spectacular and allow you to take in the extensive vistas across Provence and beyond. At a distance of 13.80km with 712m of vertical elevation, this loop is recommended for intermediates. (Est. time 5h40)

Grande Séolane (2909m) - Hike on a beautifully isolated mountain. There are several possible routes to the summit, this one is the most direct. The first part in the alpine meadows is followed by a large segment in the summits shadow on the grandiose northern slope of the mountain. Starting from the road at Les Agneliers, take the route to the west underneath the cable cars. Follow the zigzagging path up to the Col de Thuilles and then walk along the ridge to the south west to arrive at the summit. At a total distance of 12.5km with a vertical elevation of 1209m, this route is recommended for experienced hikers. (Est. time 5h30) 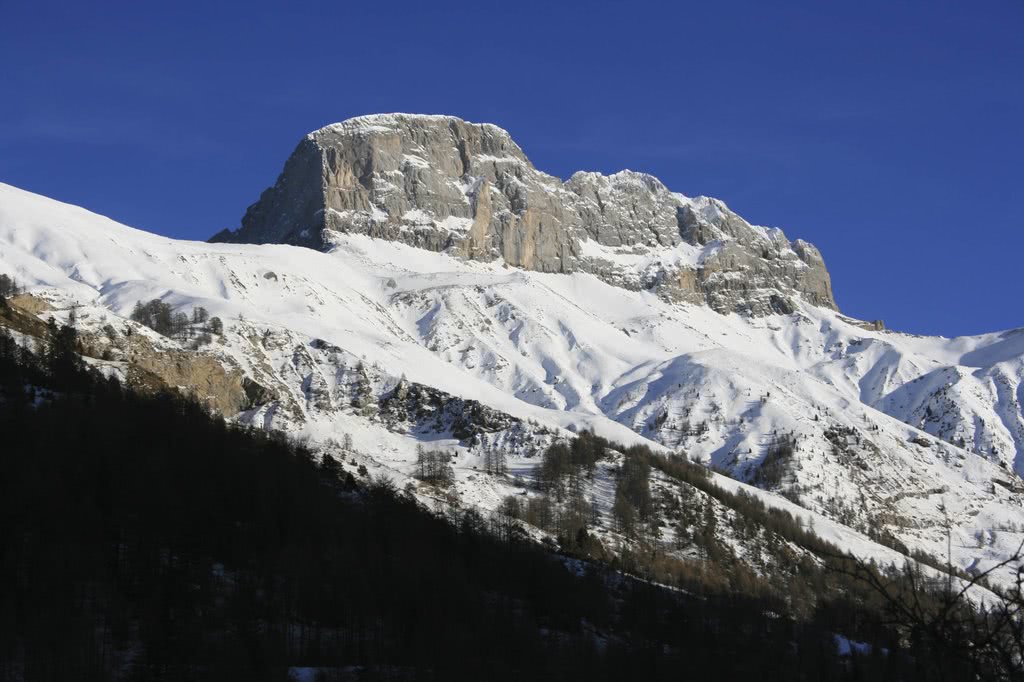 Mourre de Chanier (1930m) A magnificent hike, amongst a desert-like ambiance, with a 360 degree panorama at the summit which will take your breath away! There are views across the regional natural park of Verdon in every direction. Leaving from Rougon in the south, this 18km route with a total vertical elevation of 1153m is ideal for intermediate to experienced adventurers. The length is what makes this route difficult. (Est. time 7h55)

There are several major and minor cities in the Provence Alps and Prealps.

Gap is the largest city in the Hautes-Alpes department and whilst not strictly within the Provence Alps and Prealps, it can be found on the northern border with the Dauphiné Alps. It would offer an ideal location for excursions in each direction, not being limited to one particular mountain range. Gap is famously a very sport orientated city and in 2013 was named the sportiest city in France. Surrounded by mountains, one of the most prominent peaks in the area is the Pic de Bure. In the summer months it is accessible on foot, and each wednesday, via a cable car from the Superdévoluy ski resort. 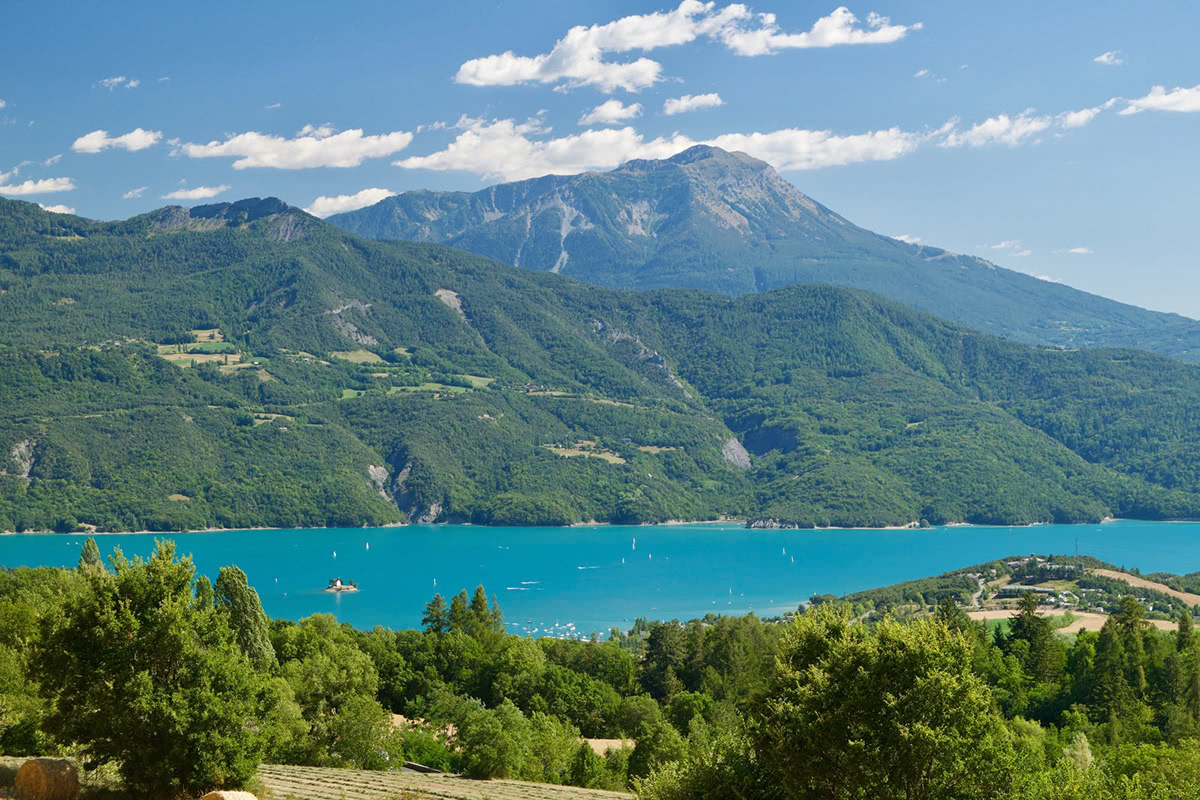 Orange - A commune in the Vaucluse Department in the Provence-Alpes-Côte d’Azur region in southeastern France. Orange is a major passing point for traversing France, whether that be to the north, Spain in the west, or Italy in the east. Once an old Roman settlement, some of the impressive architecture remains - notably one of the best conserved Roman theatres in the world. Orange is also a renowned agricultural region with the famous Châteuneuf du Pape wine produced a short distance away. 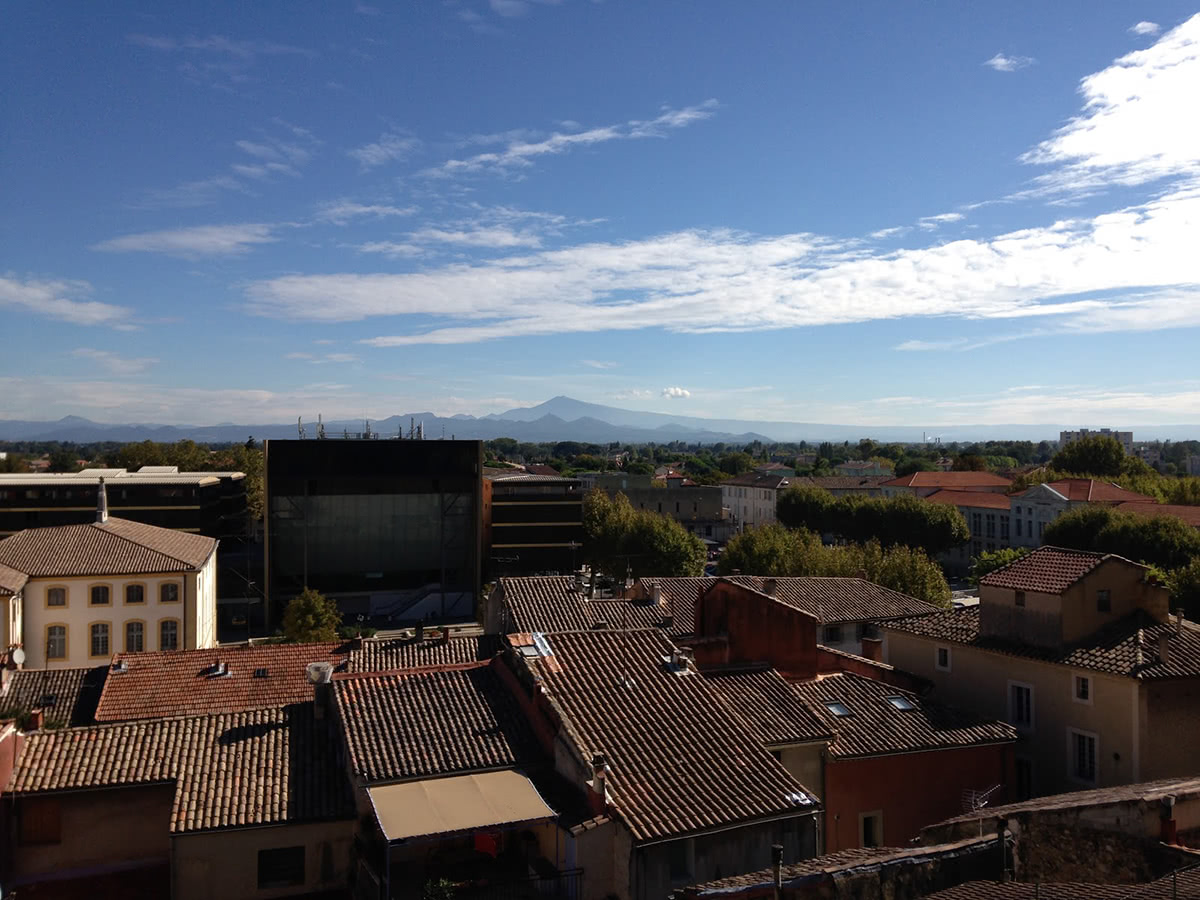 Mont Ventoux as seen from Orange in the west

Nice - The capital of the Alpes-Maritimes department and the fifth largest city in France, Nice is situated on the beautiful Mediterranean coast, within the French Riviera. Nice is a popular destination throughout the year, with temperatures in the winter months remaining comparatively warm. Nice’s position in the south of the region allows for expeditions Natural Park of the Prealps d’Azur, created in 2012. 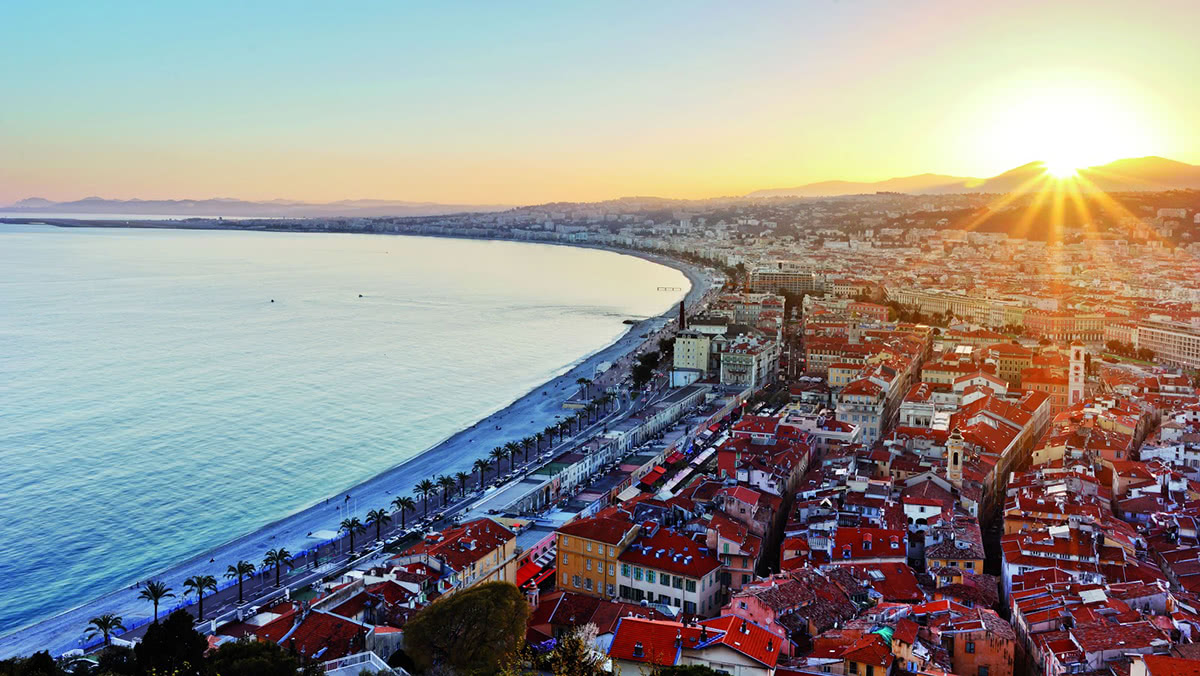 View of Nice and the Mediterranean coastline

Digne Les Bains - A small town situated in the Alpes-de-Haute-Provence region, Digne as it is known locally, is a gateway to the UNESCO Geo-Park of Haute-Provence. 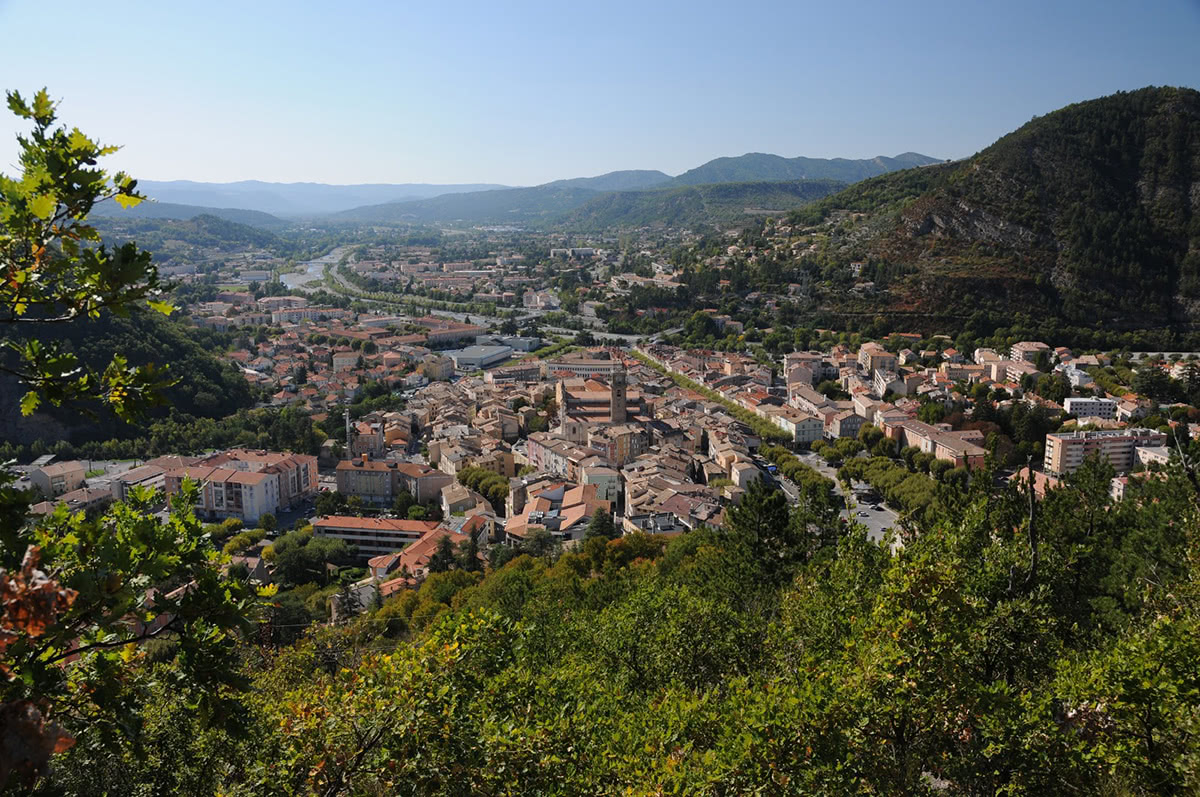 Dignes-les-Bains as seen from the south 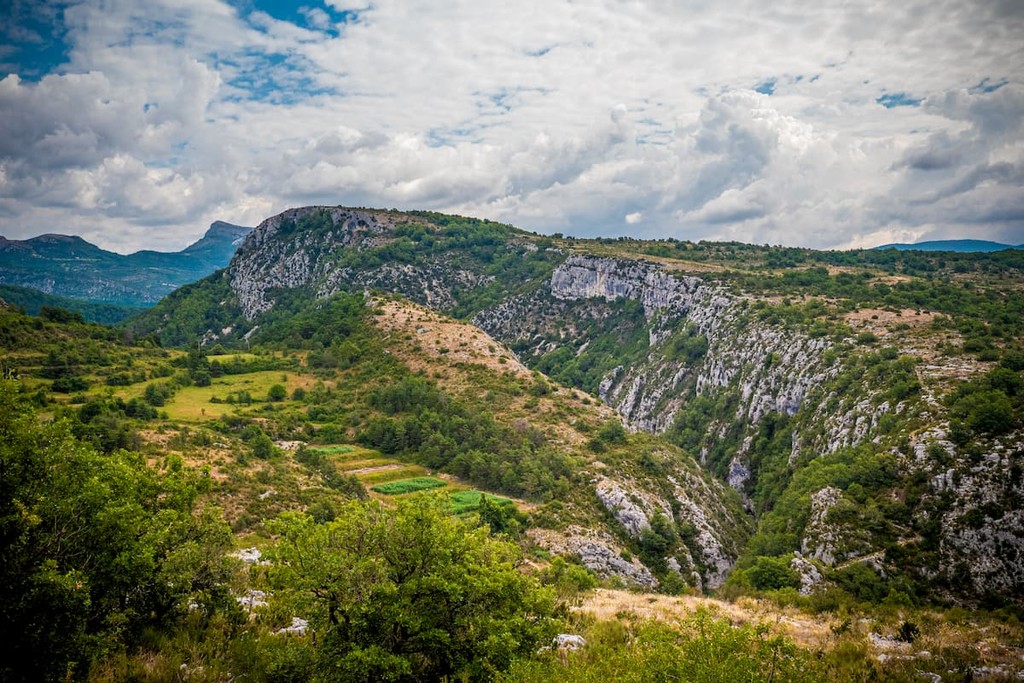