There are 66 named mountains in Mikuni Mountains. The highest and the most prominent mountain is Mt. Saburyu (2,191m).

The range is characterized by natural features of peculiar beauty but is relatively far from any inhabited area and the afforestation is extremely low. Also, due to its position, the daylight hours all over the year are relatively few. The heavy rainfalls in summer and snowfalls in winter make the erosion process harsh, thus facilitating the formation of deep valleys. Although this causes the presence of steep slopes, the terrain in the proximity of Mt. Saburyu is quite plain and almost entirely covered by meadows.

Except for Mt. Tanigawa, all the other peaks are easily accessible. Due to the presence of comfortable mountain huts, an overnight stay is the most convenient option in many cases. Yet, this does not mean hiking trails are always well-marked or easy to find. In general, all the area on the east side of the pass presents peaks that do not exceed 2,000m, which makes them suitable for family hikes. However, all the popular routes are recommended to experienced hikers.

Mt. Naeba (苗場山 2,145m) This stratovolcano is located on the border between Nagano and Niigata prefectures, inside the Jōshin'etsu-kōgen National Park. The vicinity is scattered by peaceful marshlands, while numerous ski resorts make it a popular destination for winter adventurers. Here lies also the Ime Shrine built in ancient times by local people who established an intimate relationship with this mountain because they believed it was the god of rice. There are three major long trails. The Haraigawa Trail is a 13km-long 1-day hike feasible in about 7-8h, but hikers may decide to complete it in 2 days. There is not a great gain in elevation from the base to the top, which makes the trail suitable for beginners. The first part of the route consists of a roadway where hikers won’t get dirty. The Koakasawa trail is another daily hike consisting of 16km feasible in 6h. You can proceed by car until the third stage. Although there are chains and difficult passages along the way, on the whole, this is not a dangerous trail. The third trail is a 14km, 7h round trip including a gondola trip called Dragondola (the longest gondola in Japan) starting from Naeba Prince Hotel which stops at Kaguragamine trailhead. You can also get on the Tashiro Ropeway from Kagura Snow Resort.

Mt. Shirasuna (白砂山 2,139m) is a popular destination listed in the Gunma Ridgeline Trails, as well as in the 200 Famous Japanese Mountains, in the Famous Mountains of Unexplored Regions and The Gunma Famous Mountains. Not only it is ideal for camping and onsen tourism, especially in the early summer and in autumn, but it is also the starting point of a popular circular trail located next to Nozori Lake, which proceeds around Jizo Pass, Mt. Dou Iwayama (2,052m), and Mt. Hachikenza. The Hannokisawa wading spot is the only tricky passage of this 14km easy walk feasible in 8h. After the hike, a stop at Shiriyaki onsen will help relieve the tension from your muscles and bones. We suggest combining a hike with a camping experience. Regarding the camping sites, there is a camping area located along the Gunma prefectural border ridgeline trail near Nozoki Lake at 2000m, equipped with bungalows, tents, barbecues, toilets, laundries and other useful facilities.

Mt. Hiragatake (平ヶ岳 2,139m) is one of the 100 Famous Japanese Mountains, located north of the Ozegahara marshlands, in an unexplored and difficult to reach area. Despite its name meaning “flat peak”, the longest trail on this mountain consists of a never-ending series of ups and downs resulting in a 12h/22km-long round-trip, starting from Taka-no-su trailhead (鷹ノ巣). It also includes stops to other nearby peaks such as Mt. Shimo-Daikura (下台倉山 1,604m) that can be reached in 2h. From there, hikers can see Mt. Hiuchigatake right on their left. They can also reach the top of Mt. Daikura (台倉山 1,699m) in about 45 minutes. After that, the path will leave the forest for the last big climb of the hike towards Mt. Ikenotake (池ノ岳). This is the first peak of Mt. Hiragatake, one of the hardest day hikes of the Mikuni Range.

Proceeding along the same ridge, hikers will reach another junction. They must turn to the left for a short hike to Tamago-ishi (玉子石). This brief route is becoming much more popular among elderly hikers who don’t have the energy to complete the entire hike. Since there are not any mountain huts and camping is usually not allowed, it is recommended to complete the long hike in 1 day.

The Echigo Sanzan is a minor range of the Mikuni Mountains, formed by three major peaks part of the Echigo Sanzan-Tadami Quasi-National Park: Mt. Hakkai (八海山 1,778m), Mt. Komagatake (越後駒ケ岳 2,002m), and Mt. Nakanotake (中ノ岳 2,085m). Regarding Mt. Nakanotake, the resemblance of this peak’s gentle slopes to the shape of a crescent moon has earned it the name “moon mountain”. In the past, there was a single trail used to traverse the whole ridgeline passing through Mt. Hakkai, Mt. Komagatake and Mt. Usagidake (兎岳) through the Juji Gorge (Cruciform Gorge). During the Edo period, miners and gold hunters were principal frequenters of this trail who also left the steel edifice that still functions as a mountain hut. It takes about 8h to complete this intermediate-expert 12km trail. An 18-km multi-day round hike to Mt. Tango (丹後山 1,814m) is also available, but this is an extreme hike. It starts from the same trailhead as the Juji Gorge trail but includes a stopover at Mt. Ominakami (1,835m). In the area, nearby hikers can indulge in the view of some natural attractions such as Shakunage Lake.

Mt. Hakkai (八海山 1,778m) is one of the 200 Famous Japanese mountains and it is both a religious and historical spot. Despite the reasonable elevation, it is known mainly for the rugged and inaccessible trails provided with chains, ladders and ropes over bare rocks neatly exposed. Among the trails for expert hikers, there are the Yatsumine Seiha Trail and the Byobudo-Shinkaido Trail. Despite the “beginner level”, it doesn’t mean the walking is easy to this peak, from the ropeway to 千本檜 hut one trail is suitable for beginners. It is a proper climb with chains, even though those are few compared to other trails. Also, a 5-minute ropeway ride travels through beautiful scenery up to the station on top of Mount Hakkai. A further 5-minute walk takes you to Mount Hakkai Observatory where you can enjoy a 360° panoramic view. On fine days, the view extends as far as the distant mountains of Joshinetsu, the Sea of Japan and Sado Island. From the fourth station of Mount Hakkai you can enjoy the following mountain-top paths: Shinkaido trail, 5h20m, 4km; Byoubu trail, 6h40m, 4.7km. Another option is to take the top station side trail, 20m to the top. Or a 90min Nyoindo trail located at the 6th station.

Mt. Komagadake (越後駒ケ岳 2,002m) is one of the 100 Famous Japanese Mountains and was a prolific silver mine during the Genroku Period. In this area, it is possible to spot the natural phenomenon of cloud waterfalls, especially near Oku-Tadami Lake. There are few medium-long routes feasible on a one-day hike by intermediate or expert hikers. The major climbing route is the 14.1km along Shiori Pass-Myōjin Pass course, feasible in 11h. It extends mainly across the ridgeline. Should you wish to lodge in the only mountain hut, the fee is 2,000 Yen. If you want to enjoy the Silver Mine Onsen you can choose a longer hike of 16.9km feasible in 12h. For the same distance, the Komanoyu Onsen course is available, but it is quite a steep ascent. There is also a 32.1km trail feasible in 2 days by intermediate hikers which crosses the Juji Gorge trail.

Mt. Sennokura (仙ノ倉山 2,026m) takes its name from the remarkable presence of waterfalls. The shortest trail is 12km long and it takes 7h to complete. This is a peak for intermediate hikers. Although it is possible to accomplish the goal on a one-day hike, a multi-day hike may be useful to enjoy the mountain at its best. For a longer hike, visitors usually begin their trip from Tairappyou trailhead, reaching Mt. Sennokura after a stop at Mt. Matsude and Mt. Tairappyo through a particularly steep ascent. There is a steel tower of the power line along the way. If you manage to cross this point the rest of the ascent will be almost gentle. From the top of Mt. Matsude, it will take 2h for a round trip. Another option is to follow the 15.2km long ridgeline trail for 8h45m to Mt. Daigenta, where ropes are scattered along the way.

Mt. Makihata(巻機山 1,967m) is a remote mountain characterized by majestic waterfalls, crystal clear waters and lush vegetation. No surprise it also made into the list of the 100 Famous Japanese Mountains. The main trail consists of a flat path crossing some fields before reaching the Nukubi river, where there are various wading spots, facilitated by the presence of rocks. Then, there is a crucial trail junction. Hikers have 2 choices: either take the standard route on the right or go left and take the ‘adventure course’. Descending via the Nukubi trail is not recommended. It is better to fly down the mountain via Mae-Makihata, the trail that most people use to access the mountain.

After getting off at Echigo-Yuzawa Station from the Joetsu Shinkansen, you can take a bus toward Mt. Naeba area. The Naeba Ski Resort holds the Fuji Rock Festival in July, Japan's most famous annual rock music festival. If you are travelling by car, it takes about two hours to drive from Tokyo to Echigo Yuzawa on the Kanetsu Expressway.

Departing from Tokyo and travelling past Takasaki, you pass the Echigo and Mikuni Mountain Ranges, reaching Uonuma, a city that has a stunning natural background. Here hikers can indulge in pleasure cruises, campgrounds, promenades and other playful activities. 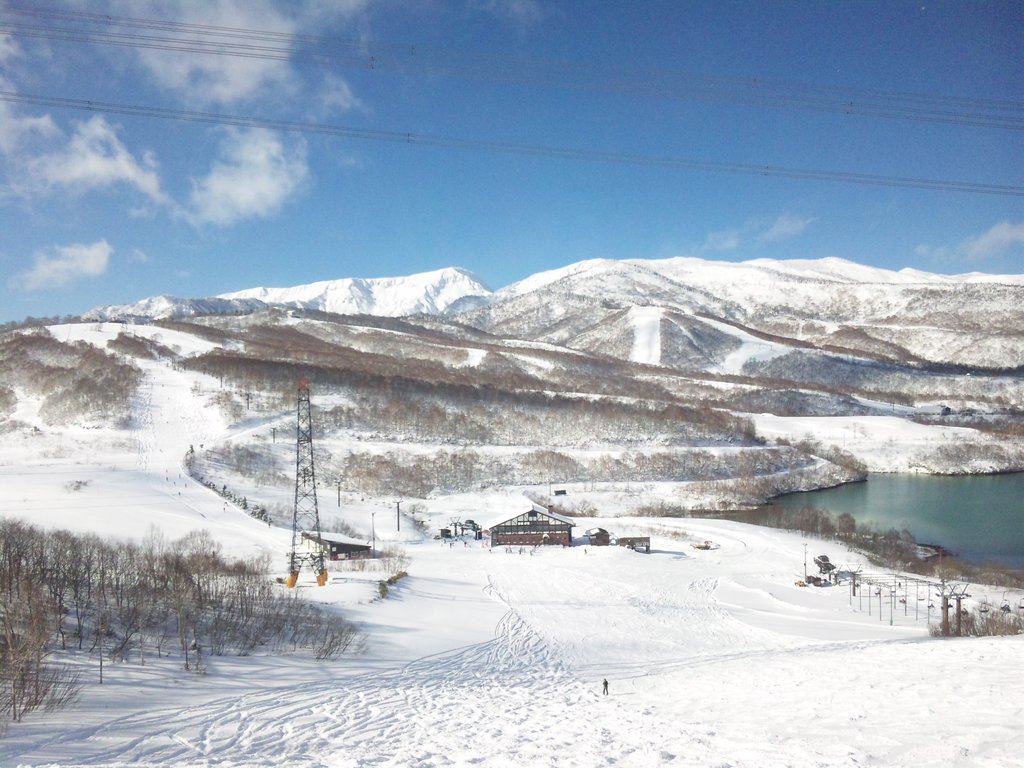 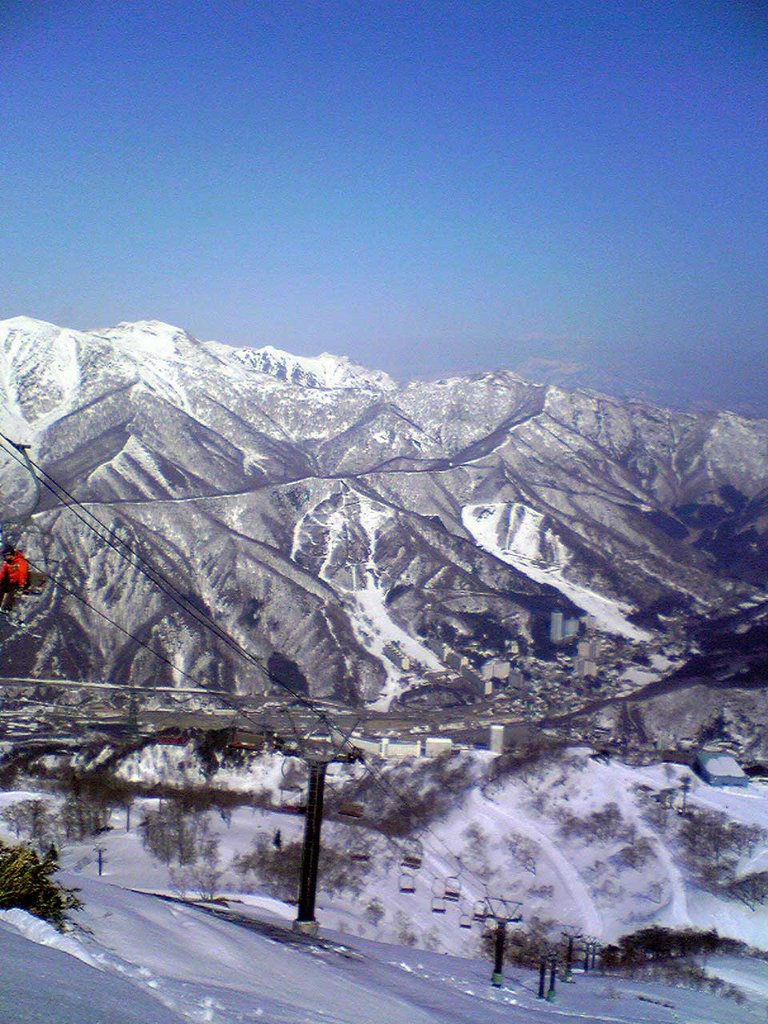 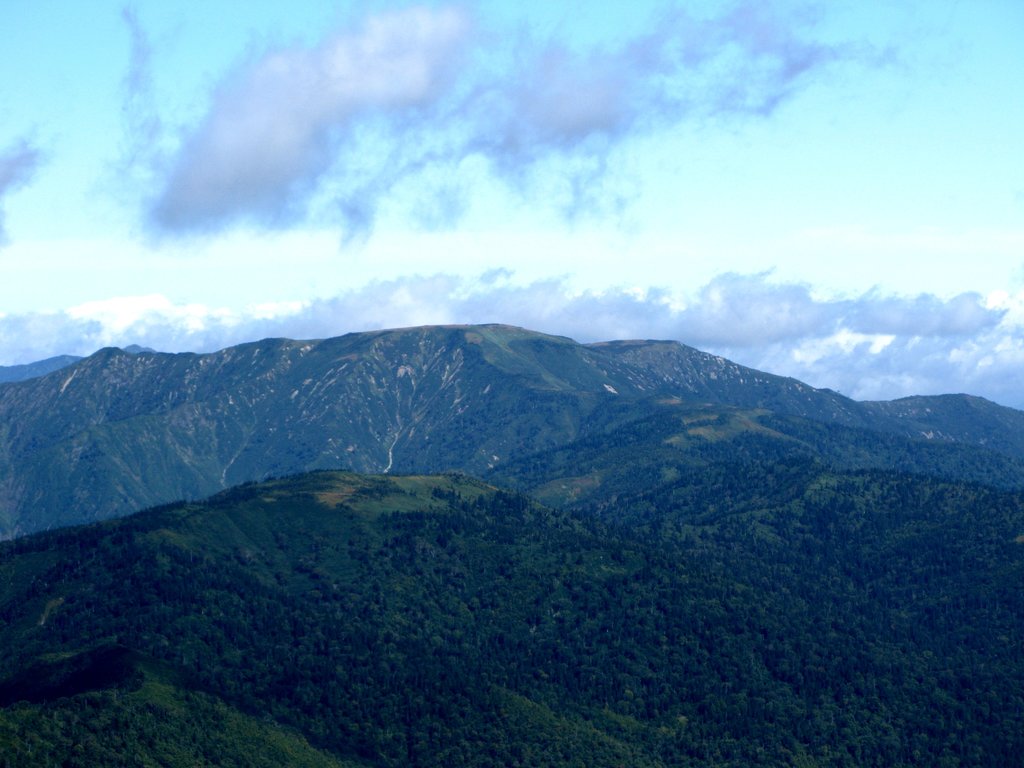 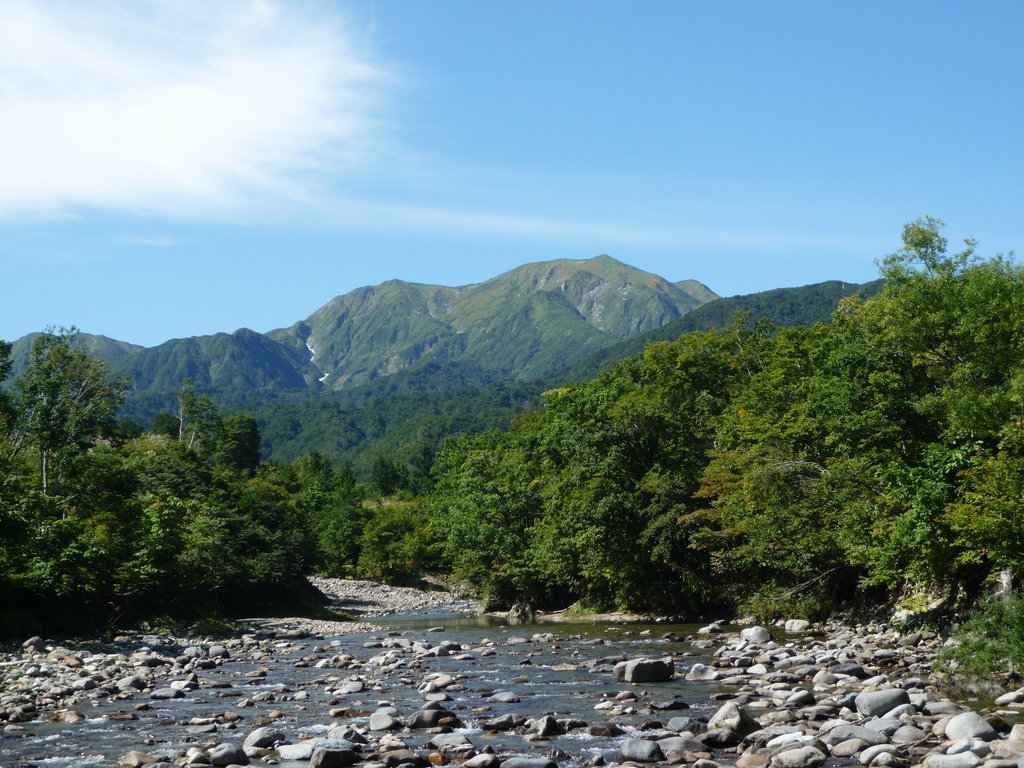 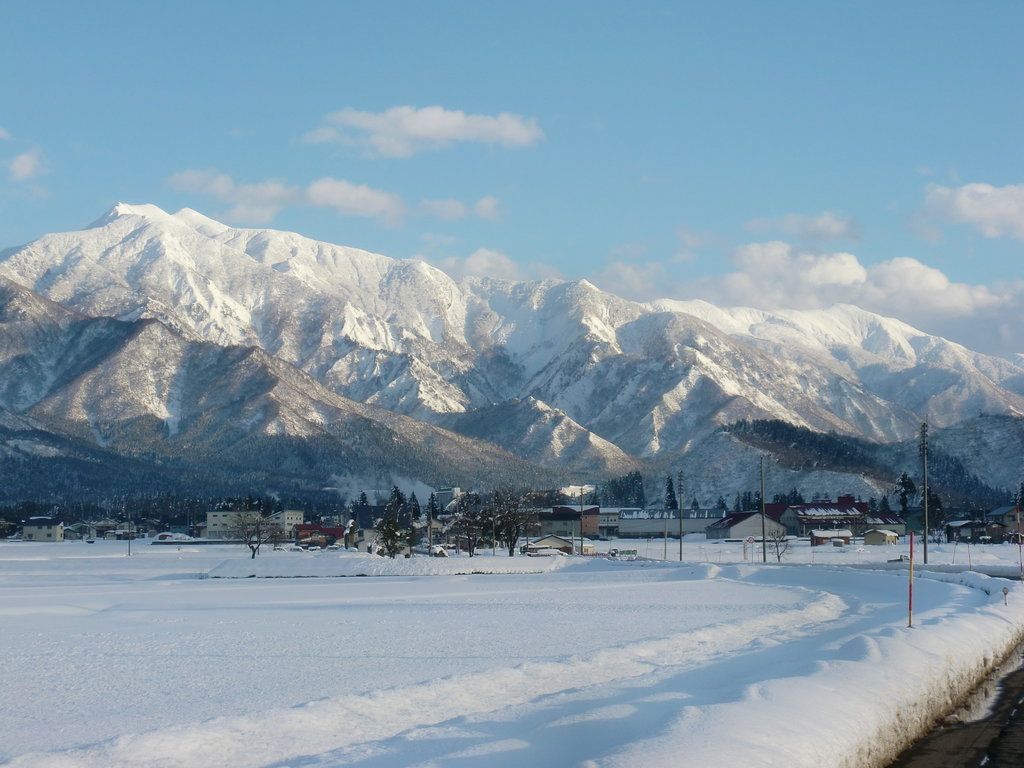