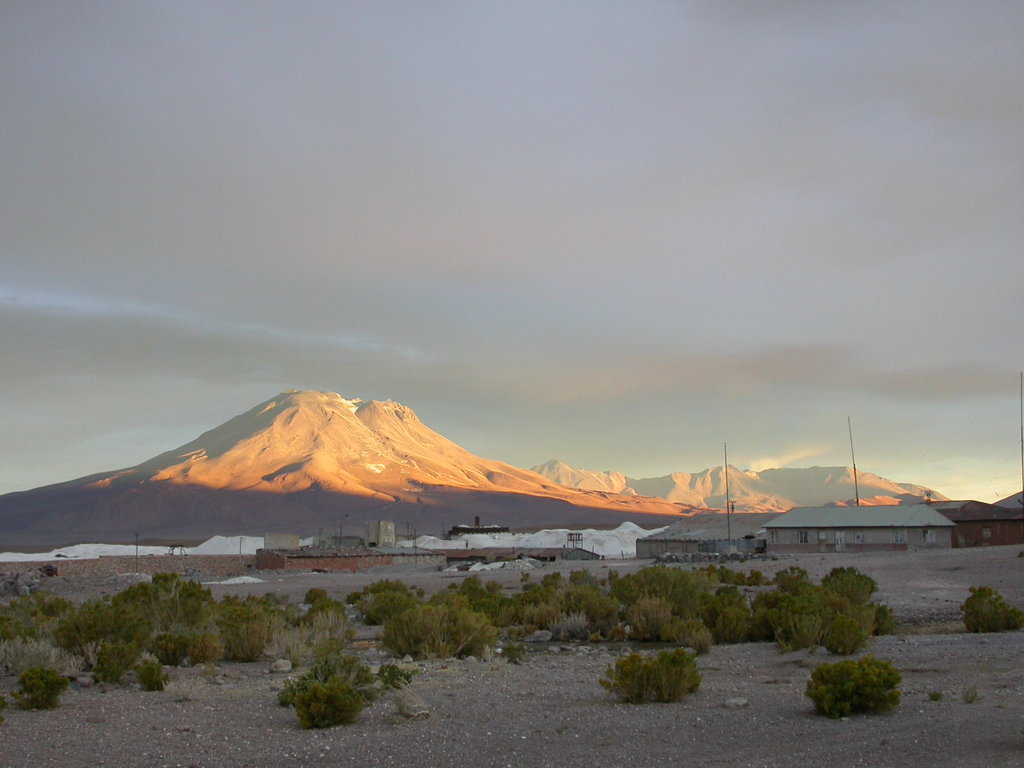 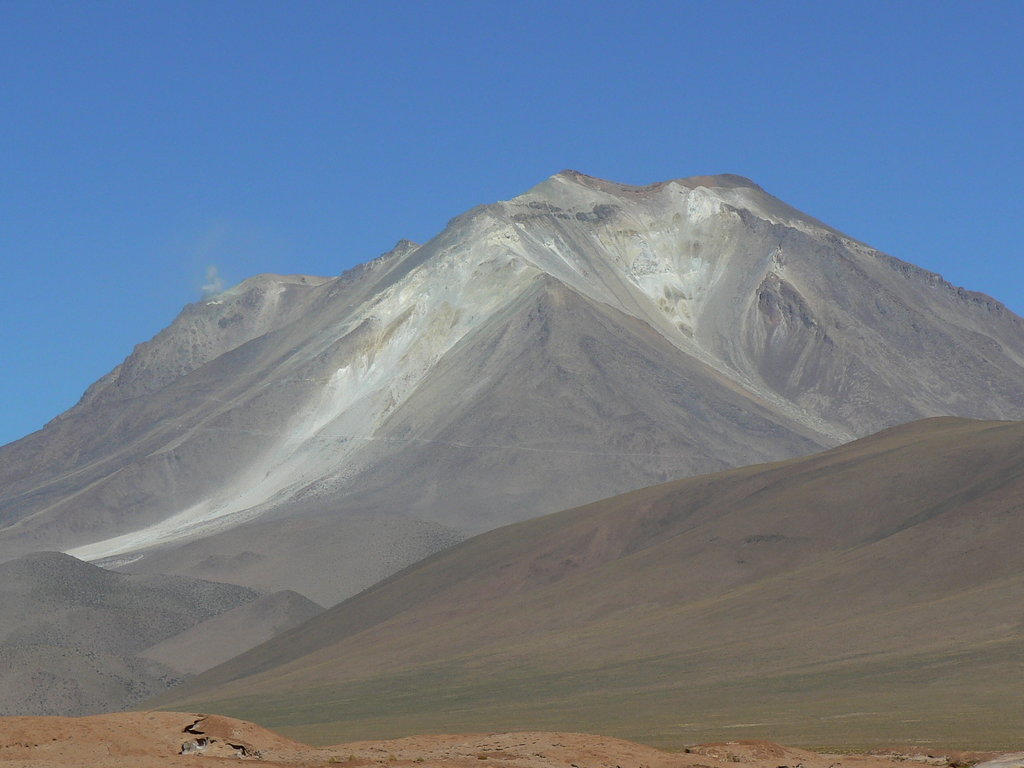 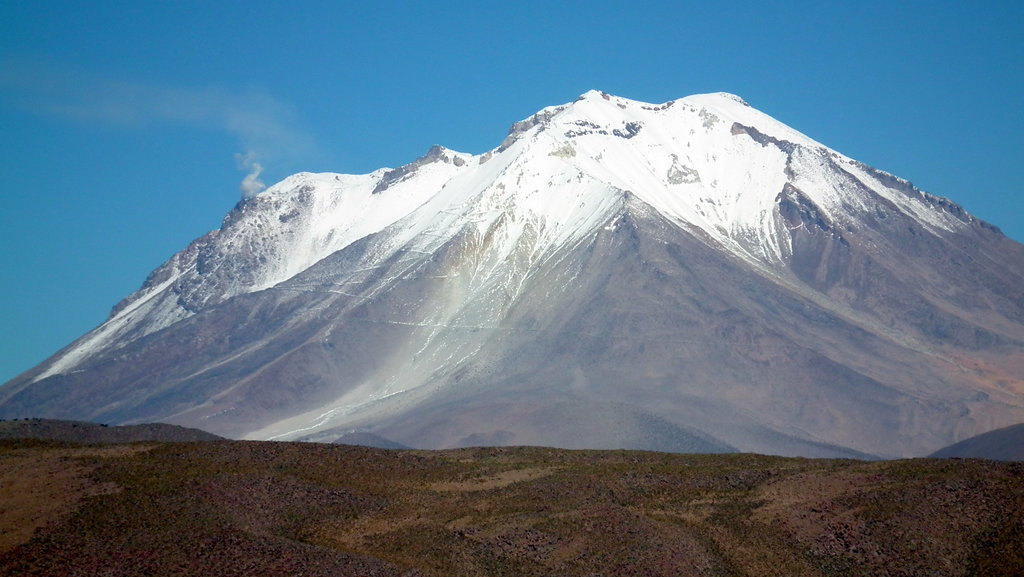 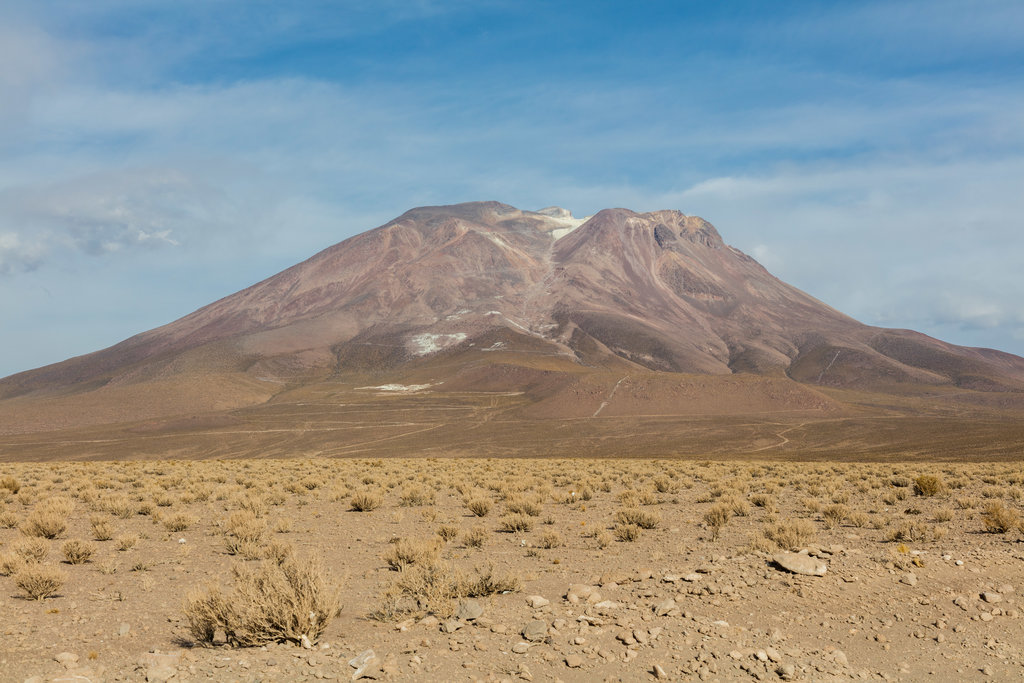 Show 3 photos
Add photo
5 868 m
Elevation
Elevation is the altitude of a place
above sea level.

1 695 m
Prominence
Peak’s prominence is the least
vertical to be covered to get from the
summit to any other higher terrain.

Proportional Prominence 4 291 m
Ultra
Mountains with prominence of 1 ⁠500 ⁠m / 4 ⁠921 ⁠ft or more.
Volcano
Most commonly a conical hill or mountain built around a vent that connects with reservoirs of molten rock below the surface of the Earth.
Location
-21.302262 S  -68.179355 W

Ollagüe (Hispanicized spelling) or Ullawi is a massive andesite stratovolcano in the Andes on the border between Bolivia and northern Chile, within the Antofagasta Region of Chile and the Potosi Department of Bolivia. Part of the Central Volcanic Zone of the Andes, its highest summit is 5,868 metres (19,252 ft) above sea level and is capped by a summit crater that opens to the south. The western rim of the summit crater is formed by a compound of lava domes, the youngest of which features a vigorous fumarole that is visible over large distances.

Ollagüe is mostly of Pleistocene age. It started developing over one million years ago, forming the so-called Vinta Loma and Santa Rosa series mostly of andesitic lava flows. A fault cut into the edifice and caused two large landslides. Later two groups of lava domes formed, the Ch'aska Urqu on the southeastern slope and the La Celosa on the northwestern. Both are formed by dacite. Another centre named La Poruñita formed at that time on the western foot of the volcano, but it is not clear whether it is part of the main Ollagüe system. Activity at the summit continued during this time, forming the El Azufre sequence.

This phase of edifice growth was interrupted by a major collapse of the western flank of Ollagüe. Debris from the collapse spread in the form of hummocks down the western slope and into the adjacent salar, splitting it in two. The occurrence of this collapse was perhaps facilitated by a major crustal lineament that crosses Ollagüe from southeast to northwest.

Later volcanic activity filled up the collapse scar, forming the Santa Cecilia series. This series includes lava flows as well as a compound lava dome on the western rim of the summit crater, which represent the youngest volcanic activity of Ollagüe. Later glaciations have formed moraines on the volcano.