6 861 m
Elevation
Elevation is the altitude of a place
above sea level.

1 584 m
Prominence
Peak’s prominence is the least
vertical to be covered to get from the
summit to any other higher terrain.

Proportional Prominence 4 158 m
Ultra
Mountains with prominence of 1 ⁠500 ⁠m / 4 ⁠921 ⁠ft or more.
Location
30.28097 N  80.066613 E
Nanda Kot (Hindi-नन्दा कोट) is a mountain peak of the Himalaya range located in the Pithoragarh district of Uttarakhand state in India. It lies in the Kumaon Himalaya, just outside the ring of peaks enclosing the Nanda Devi Sanctuary, 15 kilometres (9 mi) southeast of Nanda Devi itself. The name Nanda Kot literally means "Nanda's Fortress" and refers to the abode of one of the sacred forms of the Hindu Goddess Parvati who in legend has made her sanctuary amongst the ring of lofty mountains in the region.

Nanda Kot is connected to the Sanctuary wall by a high pass known as the Pindari Kanda, 5,269 m (17,287 ft). This pass, Nanda Kot itself, and the ridge proceeding south from the peak together form the divide between the Pindar and Ghori Ganga River valleys, with Dana Dhura Pass connecting the two sides. The Kaphni (or Kafani), Pindar, Lawan, and Shalang Glaciers drain the south, west, north, and east sides of the peak respectively.

The first attempt to climb Nanda Kot was made in 1905 by T.G. Longstaff, who proceeded by way of the Lawan Valley and Lawan Glacier. The first successful ascent of the summit came in 1936 by a Japanese team led by Y. Hotta. A new route involving a direct ascent of the south face was successfully undertaken by a British expedition led by Martin Moran in 1995. Mountaineering expeditions to Nanda Kot today typically follow the route through Loharkhet, Dhakuri Pass, Khati Village to Dwali base camp.

Outlying subpeaks of Nanda Kot include: 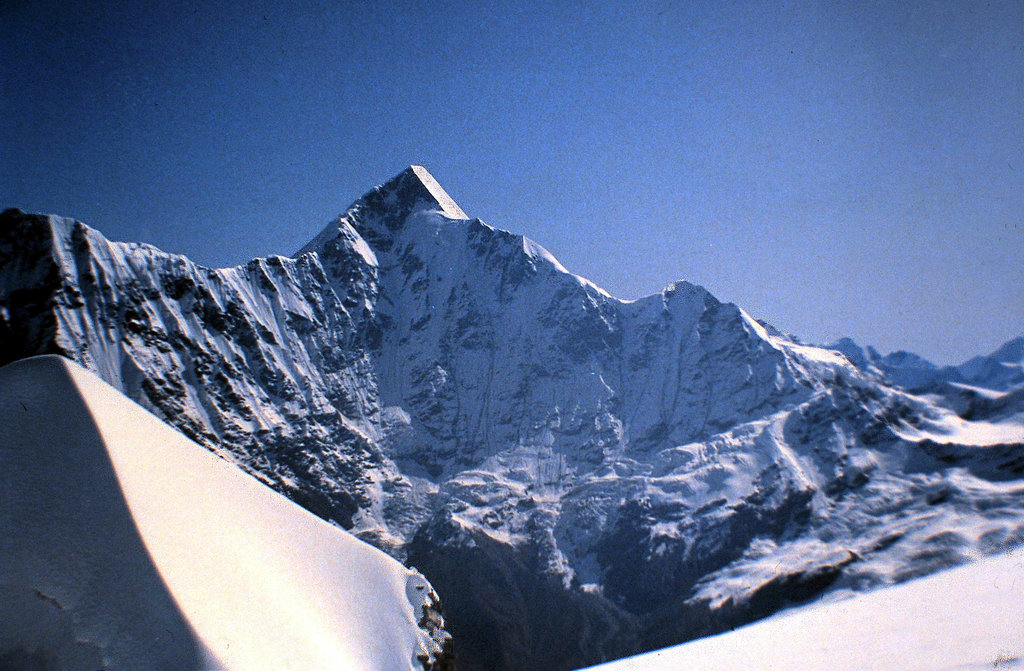