Daecheongbong map
Go to camera
Teleport
Zoom in
Zoom out

1 708 m
Elevation
Elevation is the altitude of a place
above sea level.

1 197 m
Prominence
Peak’s prominence is the least
vertical to be covered to get from the
summit to any other higher terrain.

Proportional Prominence 1 412 m
Location
38.119076 N  128.4651 E
Seoraksan is the highest mountain in the Taebaek mountain range in the Gangwon Province in eastern South Korea. It is located in a national park near the city of Sokcho. After the Hallasan volcano on Jeju Island and Jirisan in the south, Seoraksan is the third highest mountain in South Korea. The Daechongbong Peak (대청봉) of Seoraksan reaches 1,708 meters (5,603 feet). The Taebaek mountain chain is often considered the backbone of the Korean peninsula.

The national park attracts many national and international tourists all year round, but the main season for Seoraksan national park is autumn. The autumn colours in the area are considered amongst the most beautiful in Korea. The red and yellow forest is interrupted by rocks and small mountain streams flow amidst this. During the rainy season in summer—especially after a typhoon—these streams can swell.

Perhaps the most visited part of the mountain is the main entrance valley to the National Park, a fifteen-minute drive from Sokcho city. The valley runs west to east with a paved road leading up to the park's entrance gate. This valley contains many beautiful sites and is well worth a day visit.

The Yukdam waterfall and the Biryeong waterfall (비룡폭포) are located on the left side of the valley, about a forty-minute walk from the main car park. Ulsanbawi (울산바위) is a rock formation in the Seoraksan national park. The shape of Ulsanbawi is unique in the area. To reach the rocks you need to follow a hiking path and climb over 800 steps (it is actually 888 steps according to locals). On the way there, there are two temples and a spherical rock (Heundeulbawi, 흔들바위) which is located on top of a larger rock. This rock is about 5 meters (16 feet) high and can be moved with some effort. Thousands of people have already tried to push down Heundeulbawi, but nobody gets further than waggling the rock.

According to the legend Ulsanbawi comes from the city of Ulsan in the south east of Korea. As Kumgangsan (금강산) was built, Ulsanbawi walked to the north as the representative of the city. Unfortunately Ulsanbawi arrived too late and there was no more room. Ulsanbawi was ashamed and slowly trudged back to the south. One evening the rock went to sleep in the Seorak area. Ulsanbawi felt it was so beautiful around there that it decided to stay for good.

At the end of the main valley is Biseondae, a rock platform in a stream. Above the stream is a difficult to reach cave, which offers clear views of the surrounding rock formations.

A bit farther from the entrance is the Valley of a Thousand Buddhas (천불동계곡), the primary valley of Seorak Mountain, also sometimes referred to as Seorak Valley. The valley was so named because the rock formations that line its sides resemble a line-up of Buddha statues.
There's a hiking trail (T1) called 오색-대청봉 4.8Km 4:00 leading to the summit. 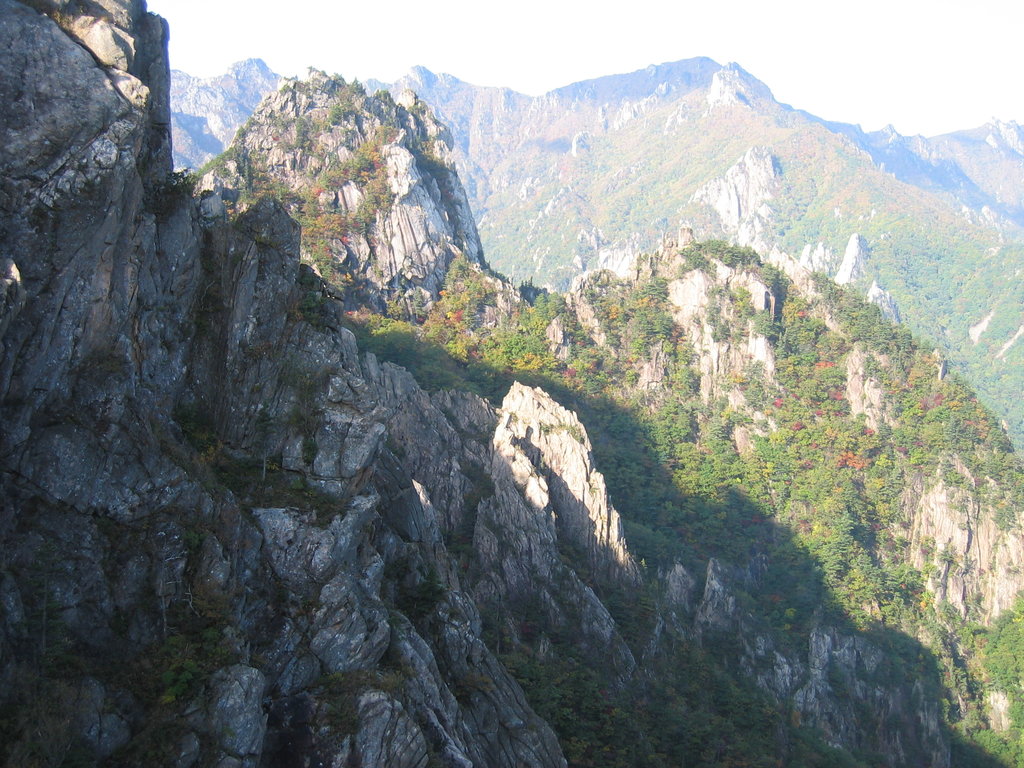