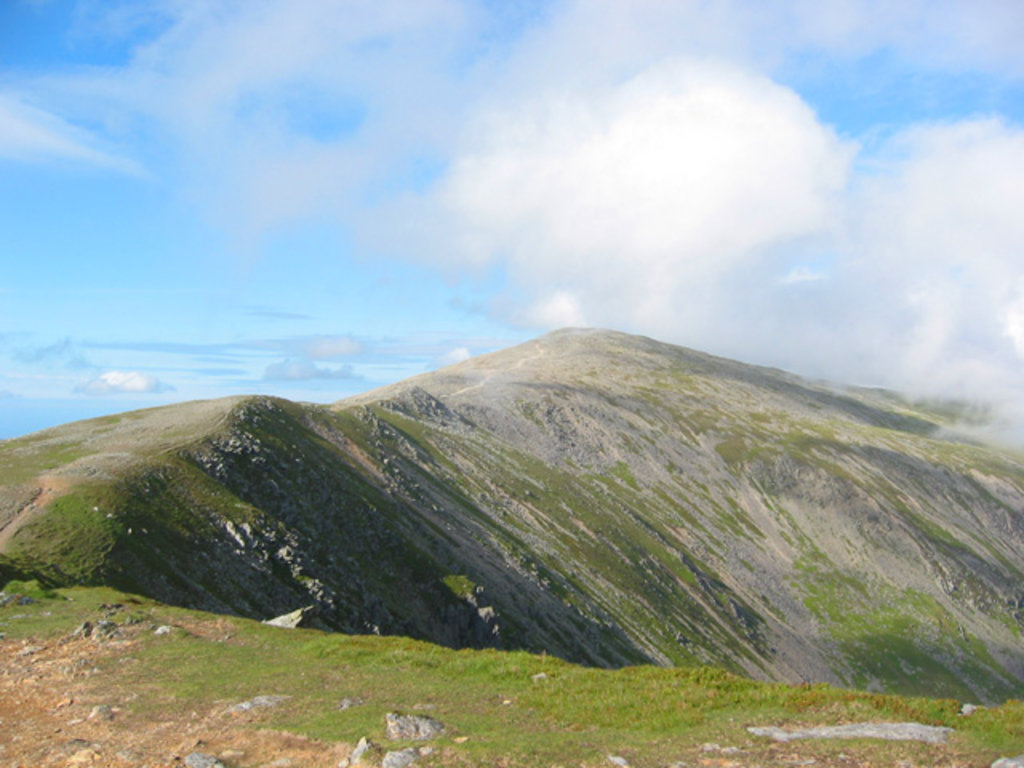 Add photo
1 044 m
Elevation
Elevation is the altitude of a place
above sea level.

128 m
Prominence
Peak’s prominence is the least
vertical to be covered to get from the
summit to any other higher terrain.

Carnedd Dafydd is a mountain peak in the Carneddau range in Snowdonia, North Wales, and is the third highest peak in Wales, or the fourth if Crib y Ddysgl on the Snowdon ridge is counted. Situated south-west of Carnedd Llewelyn and north of Pen yr Ole Wen, Carnedd Dafydd is on the main ridge of the Carneddau, and on the border between Gwynedd and Conwy. The average annual temperature of the mountain is around 3–4 °C.

Carnedd Dafydd rises to height of 1,044m (according to OS maps detail) and is usually climbed by first ascending Pen yr Ole Wen and then following the ridge along to Carnedd Dafydd, though it is also possible to make a direct ascent from Tal y Llyn Ogwen, first following the stream, Afon Lloer, to the mountain lake of Ffynnon Lloer then climbing up the slope to the summit.

Like most of the summits in the southern Carneddau, it has a flat, boulder-strewn summit plateau. Immediately to the north lie the crags of Ysgolion Duon, well-known to climbers.

The origin of its name, which translates as Dafydd's (or David's) cairn, like that of its neighbouring peak, Carnedd Llewelyn (Llywelyn's cairn), are named after Llywelyn ap Gruffudd, the last independent prince of Wales, and his younger brother, Dafydd ap Gruffudd. The nearby peak Carnedd Lladron, commonly known as Carnedd Uchaf, has now been renamed by O.S. Carnedd Gwenllian in memory of Llywelyn's daughter Lady Gwenllian. Dafydd was captured at Nanhysglain, near Bera Mawr, on 21 June 1283; taken to Shrewsbury where he was hanged, drawn and quartered.
There's a trail leading to the summit. Carnedd Dafydd is one of the 17 peaks along the Welsh Three Thousands.

53.160556 N   -3.974167 W
Nearest Higher Neighbor
Carnedd Llewelyn - 2.5 km ENE
El: 1 064 m / Prom: 750 m
Check out a downloadable 3D model of Carnedd Dafydd area. A higher resolution model can be found in the PeakVisor mobile app.
Do you have photos of Carnedd Dafydd or know something about it? Please let us know!