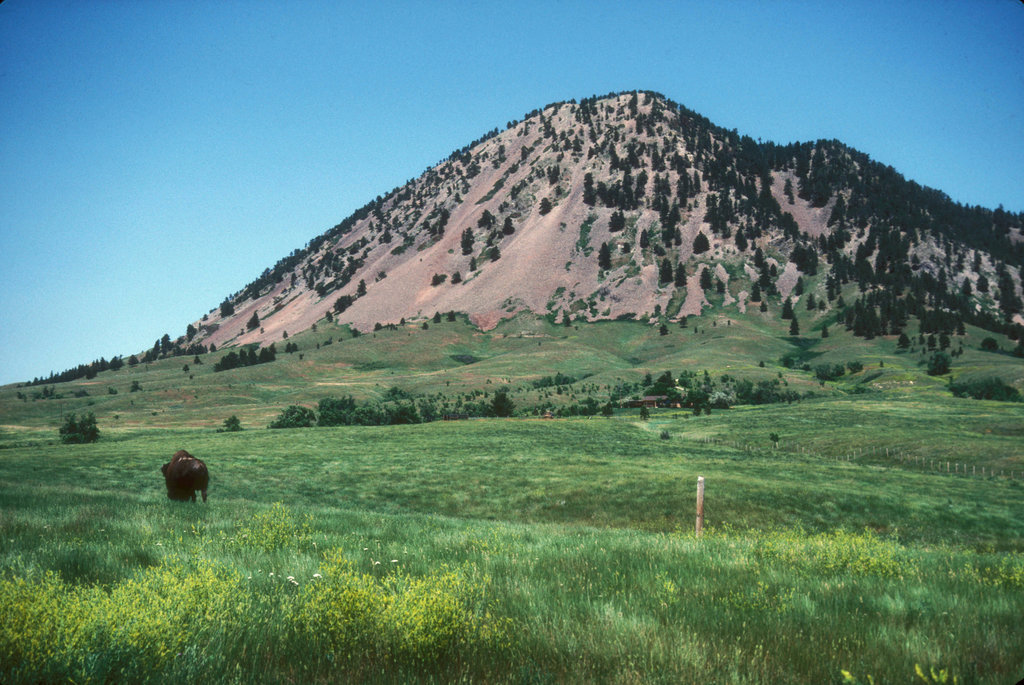 Add photo
1 345 m
Elevation
Elevation is the altitude of a place
above sea level.

378 m
Prominence
Peak’s prominence is the least
vertical to be covered to get from the
summit to any other higher terrain.

Bear Butte is a geological laccolith feature located near Sturgis, South Dakota, United States, that was established as a State Park in 1961. An important landmark and religious site for the Plains Indians tribes long before Europeans reached South Dakota, Bear Butte is called Mathó Pahá, or Bear Mountain, by the Lakota, or Sioux. To the Cheyenne, it is known as Noahȧ-vose ("giving hill") or Náhkȯhe-vose ("bear hill"), and is the place where Ma'heo'o (God) imparted to Sweet Medicine, a Cheyenne prophet, the knowledge from which the Cheyenne derive their religious, political, social, and economic customs.

The mountain is sacred to many indigenous peoples, who make pilgrimages to leave prayer cloths and tobacco bundles tied to the branches of the trees along the mountain’s flanks. Other offerings are often left at the top of the mountain. The site is associated with various religious ceremonies throughout the year. The mountain is a place of prayer, meditation, and peace.

The park includes a campsite west of South Dakota Highway 79 where horseback riding, fishing, and boating are permitted. On the summit side of Highway 79, a moderately sized herd of buffalo roams the base of the mountain. An education center and a summit trail are available. Official park policy advises visitors to Bear Butte to respect worshipers and to leave religious offerings undisturbed. Park fees are waived for those undertaking religious activities.

In 2007, Gov. Mike Rounds of South Dakota announced a proposal to use state, federal and private money to buy a perpetual easement in order to prevent commercial and residential development of some land on the western side of Bear Butte. This would cost more than $1 million, but would prevent development of nuisance businesses (such as potentially lucrative biker bars) on ranch land near the mountain on the northern edge of the Black Hills.
There's a trail leading to the summit.