Girringun National Park is a protected area in the Australian state of Queensland. It’s part of the Wet Tropics World Heritage Area, which stretches across the northeast coast of Australia. The park is home to 30 named mountains, of which Mount Maclister (1060 m / 3478 ft) is the highest point. 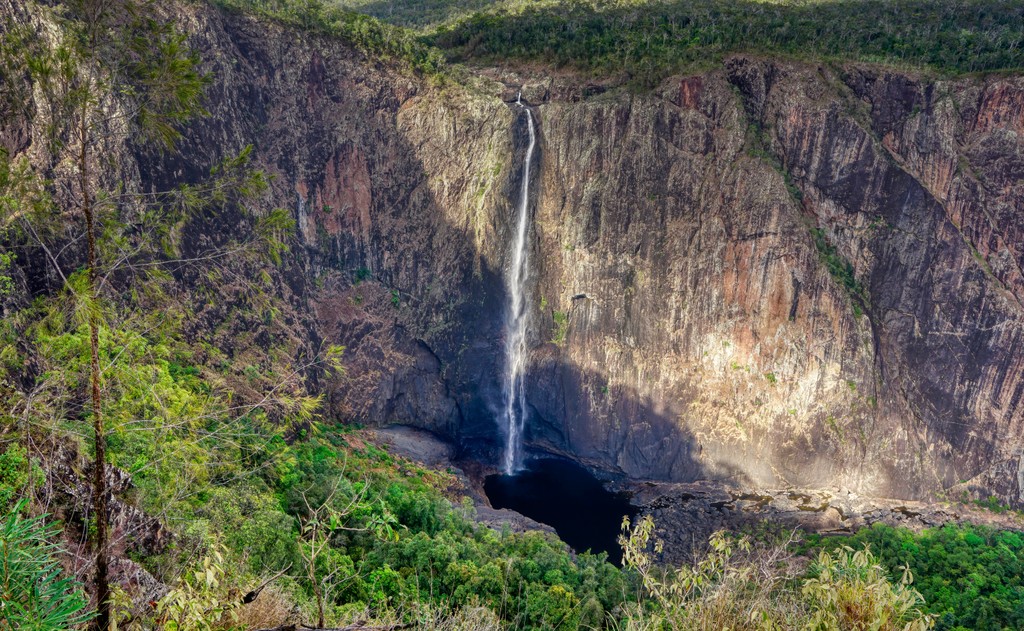 Girringun National Park covers an area of around 153,800 hectares (380,050 acres) in northeastern Queensland. It’s one of the parks that make up the Wet Tropics World Heritage Area, which covers a large area of the northern Queensland coastal region from Townsville to Cooktown. The Wet Tropics are part of the northern section of the Great Dividing Range, which runs in their entirety the length of Australia’s east coast.

Girringun National Park is dominated by the Seaview, George and Cardwell Ranges, which were formed by an ancient volcanic eruption. The landscape has also been carved out over time by the flowing rivers, particularly Stony Creek, Burdekin River, Blencoe Creek and Herbert River. For this reason, you’ll find remnants of granite debris, steep rocky cliffs, high waterfalls and small pockets of rainforest along the slopes.

Girringun National Park is predominantly made up of granite and rhyolite hills. The area’s geological history can be traced back millions of years when the uplift of the continental margin created higher landforms. Over time the region’s rivers have carved out deep gorges through the ranges as their tributaries flow towards the sea. These gorges and rocky escarpments are best admired at Wallaman Falls, Blencoe Falls and Herbert River Falls.

The region is also home to ancient volcanic remnants, notably in Herbert River Gorge and Blencoe Gorge, where layers of volcanic flows can be seen amongst the granite. However, the most significant example of volcanic landscape in the area is Mount Fox (817 m/2680 ft) in Girringun National Park. Mount Fox is a dormant volcanic cone that was created by an eruption 100,000 years ago. Evidence of this explosion in the area can be found in the striated rocks, which were thrown from the volcano and have been eroded and shaped over time.

Girringun National Park is part of the Wet Tropics of Queensland, a recognized World Heritage Area. It’s characterized by wet tropical forests found across the northeastern coast of Australia.

The western part of the park is predominantly made up of drier forest comprising open eucalypt trees and woodlands. The steep slopes of the gorges contain mostly hoop pine, which are one of the only species able to survive on the rocky escarpments. However, small pockets of isolated rainforest exist along the eastern slopes and elevated ranges.

Girringun National Park plays an important role in providing a habitat for endangered and endemic birds and animals. The park forms part of the Wooroonooran Important Bird Area, which supports several endemic bird species. Some of the most notable birds found in the park include southern cassowaries, golden bowerbirds, yellow-spotted honeyeaters, mountain thornbills, and pied monarchs.

The park is also home to many animal species, many of which are endangered. Some of the animals that the park protects includes a variety of ringtail possums, the endangered mahogany glider, the endangered spotted-tail quoll, long-nosed bandicoot and musky rat kangaroo. It’s the only reserve in Australia where all six species of gliding mammals are represented.

The rivers of the area are also home to both freshwater and saltwater crocodiles, particularly in the Herbert River. For this reason, it’s only safe to swim in designated swimming holes and waterfalls considered croc free in the dry season.

Girringun National Park is located on the custodial land of the Warrgamay, Warungnu and Girramay Traditional Owners. Significant Aboriginal creation sites and story places exist within the park boundary.

Explorer George Dalrymple led a small expedition to find pastoral land in the area in the last 1850s. In 1860, the first leases were awarded for pastoral stations. Dalrymple was granted a lease for the Valley of the Lagoons Station and proceeded to establish a supply route to the coast along an old Aboriginal trade route. This became known as the Dalrymple Track, which can be appreciated today by walkers interested in exploring a section of the original trail.

Over time the area was used for logging and mining activities, particularly, tin, gold and copper. The national park was finally recognized and created in 1994 and named Lumholtz National Park after the Norwegian scientist Carl Sofus Lumholtz. In 2003, the name was changed to Girringun, the name of the ancestral creator of the Warangnu, Jirrbal, Warrgamay and Girramay people.

There are a few walks to do in Girringun National Park. They offer a great opportunity to appreciate the beautiful flora and fauna up close, as well as view some of the stunning waterfalls in the park.

Here are some of the best walks to check out on your next visit to Girringun National Park.

This is the main walk at Wallaman Falls and allows you to get close to the park’s biggest attraction. Wallaman Falls is Australia’s tallest single drop waterfall making it a must see. The 3.2 km (2 miles) return walk starts from the Wallaman Falls lookout and ends at the base of the falls.

The trail descends the escarpment from the dry woodland down to the dense rainforest at the bottom. It offers beautiful views of the Herbert River Valley and allows you to get close to the incredible waterfall as it hits the bottom. It’s a steep descent and ascent to return to the carpark, so a moderate level of fitness is recommended.

This walk is perfect for those camping at the Blencoe Falls Camping area. The 5 km (3.1 miles) return walk takes walkers from the campground to the Blencoe Falls Lookout. The walk travels through open eucalypt forest and is a moderate graded walk.

Blencoe Falls is one of the most beautiful waterfalls in the region. It’s a dramatic plunge down 90 m (295 ft) to the pool below before cascading a further 250 m (820 ft) to the base of the gorge.

Dalrymple Gap Walking Track takes walkers through the beautiful nature and history of the region. This track follows the route built in the 1860s by pastoralists, which is also the original route taken by Aboriginal people across the Cardwell Range. Near the top of the gap is a historic brick-lined bridge still intact.

This track can be walked in either direction, but is best done as a one-way walk. It’s 10 km (6.2 miles) from the end of Dalrymple Gap Road near Damper Creek to Dalrymple Road near Abergowrie.

To appreciate the dormant volcano of Mount Fox (817 m/2680 ft), there’s a 2 km (1.2 miles) return walk to the crater rim. The walk is a little difficult with a steep climb but it’s well worth the effort to appreciate the view from the top over the crater and surrounding countryside. It is not a marked or maintained track and is for experienced walkers with a high level of fitness only.

The longest of Queensland’s Great Walks, the Wet Tropics Great Walk is 110 km (68.3 miles) long and takes on average around 10 days to complete. The trail links Blencoe Falls and Wallaman Falls through rugged parts of the national park inaccessible to any vehicles.

The walk is divided into sections so there are options to complete shorter multi-day hikes instead of the full length with various access points. There are a couple of walk-in campsites available for hikers to use.

The northern section is known as the Juwun Walk from Blencoe Falls to Yamanie via Blanket Creek and the Herbert River Gorge. It’s a 44 km (27.3 miles) section which takes between 4-6 days.

The next section is the Buujan Quiinbiira walk which stretches for 38 km (23.6 miles) from Yamanie to Wallaman Falls, enabling you to connect the two waterfalls. Otherwise, the three-day Djagany walk starts from Wallaman Falls and extends for 57 km (35.4 miles) to Henrietta Carpark. From there, you can also continue on the Gugigugi walk which then heads all the way to Yamanie on a 38 km (23.6 miles) or two day trek.

If you’re looking to stay close to the attractions of Girringun National Park, then camping is the best option. There are six official campgrounds to choose from, each in a different section of the park.

You must book and pay for your campsite before arriving on the QLD Parks website.

Girringun National Park is very accessible from several towns on the east coast of Australia. If you’re planning a road trip, here’s where you can start your journey from:

While Girringun National Park is close to some major towns and cities in Queensland, it’s quite a distance from the capital city. However, if you’re looking to take an extended road trip from a capital city, then check out this option:

Brisbane is the capital city of Queensland, however, it’s quite a distance away from the national park. Girringun National Park is around 1525 km (947.5 miles) north of Brisbane city center.

Brisbane is well-connected with an international and domestic airport as well as major national highways. The city is located on the east coast of Australia and is known for its proximity to stunning surf beaches and other national parks. 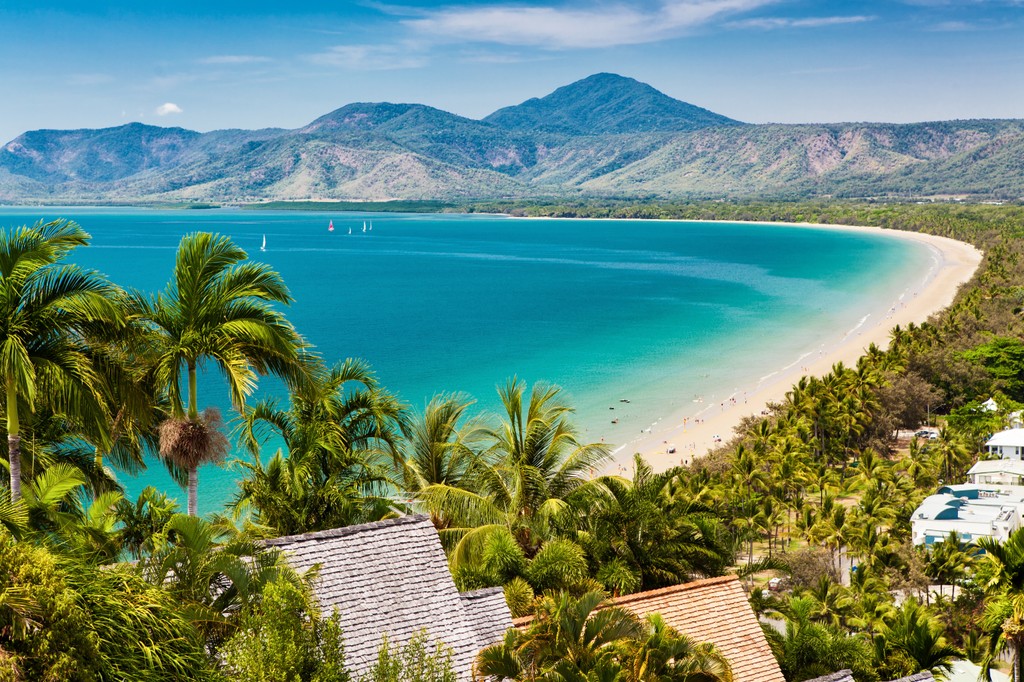 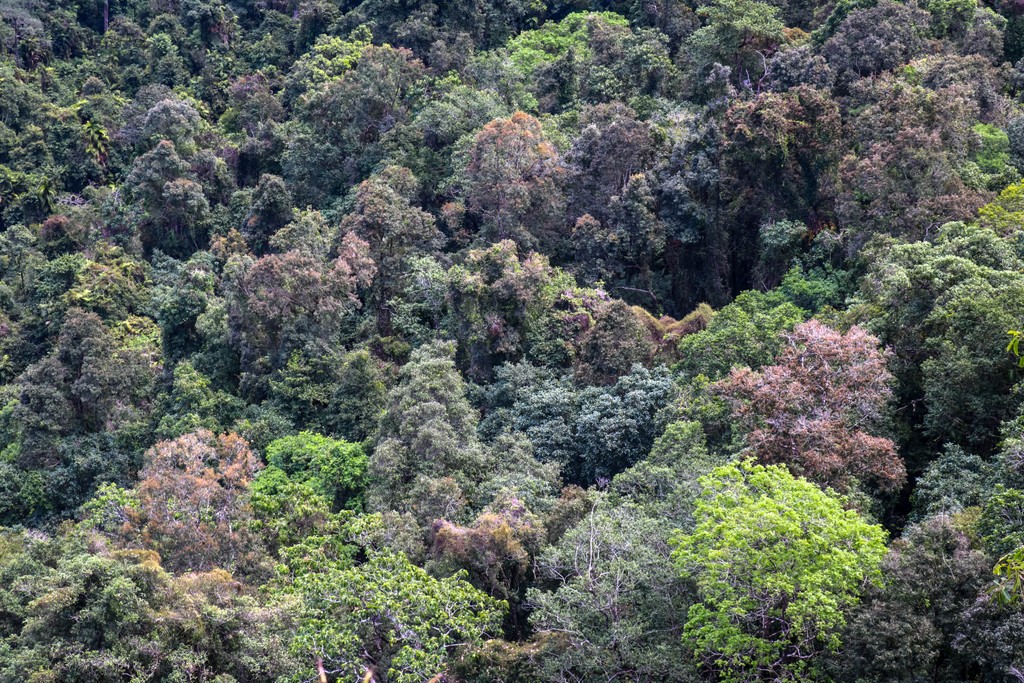 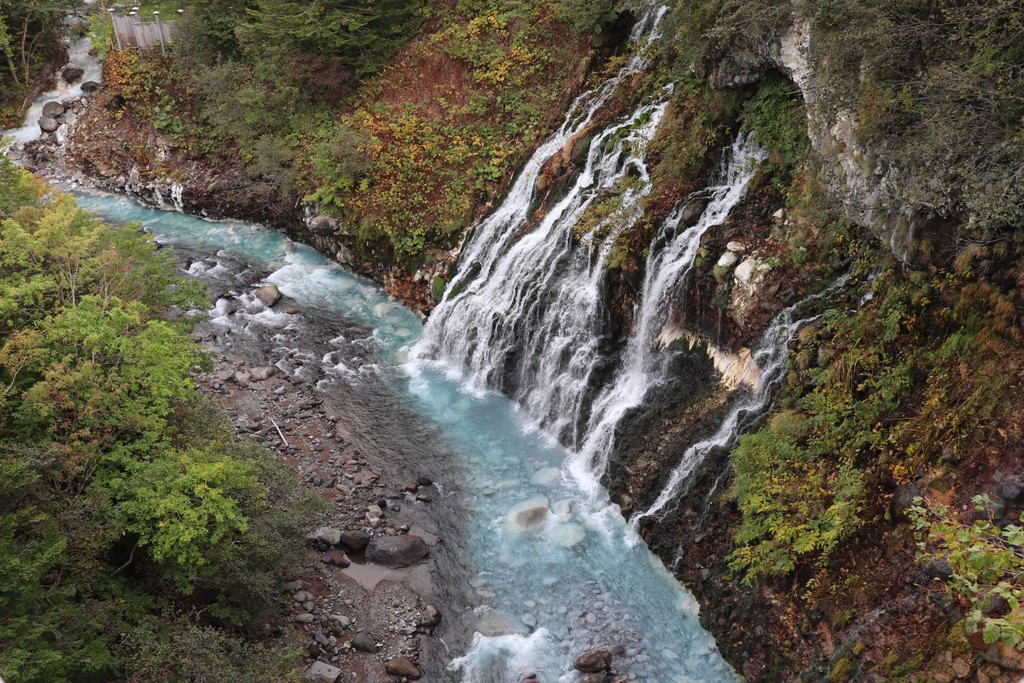 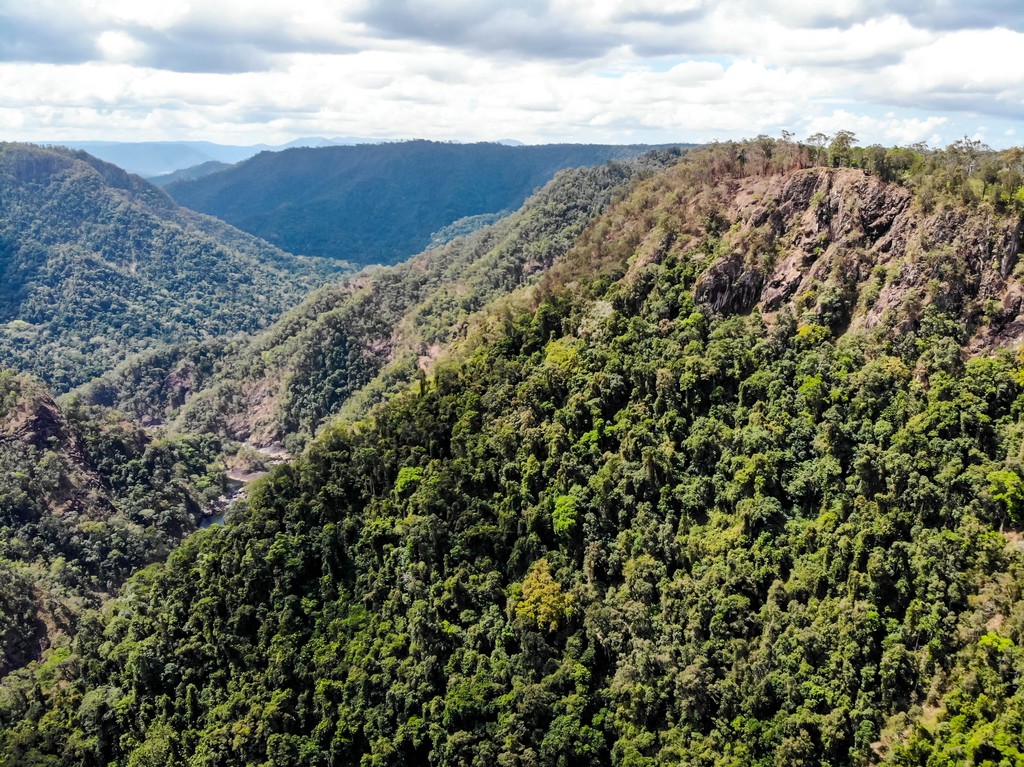 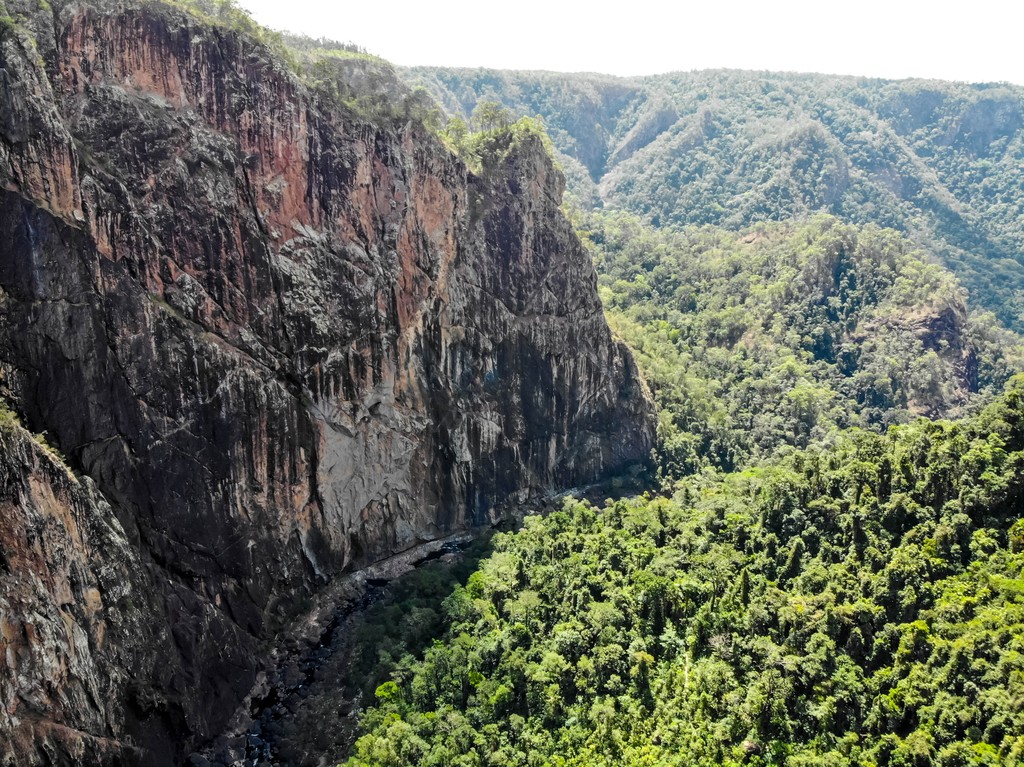 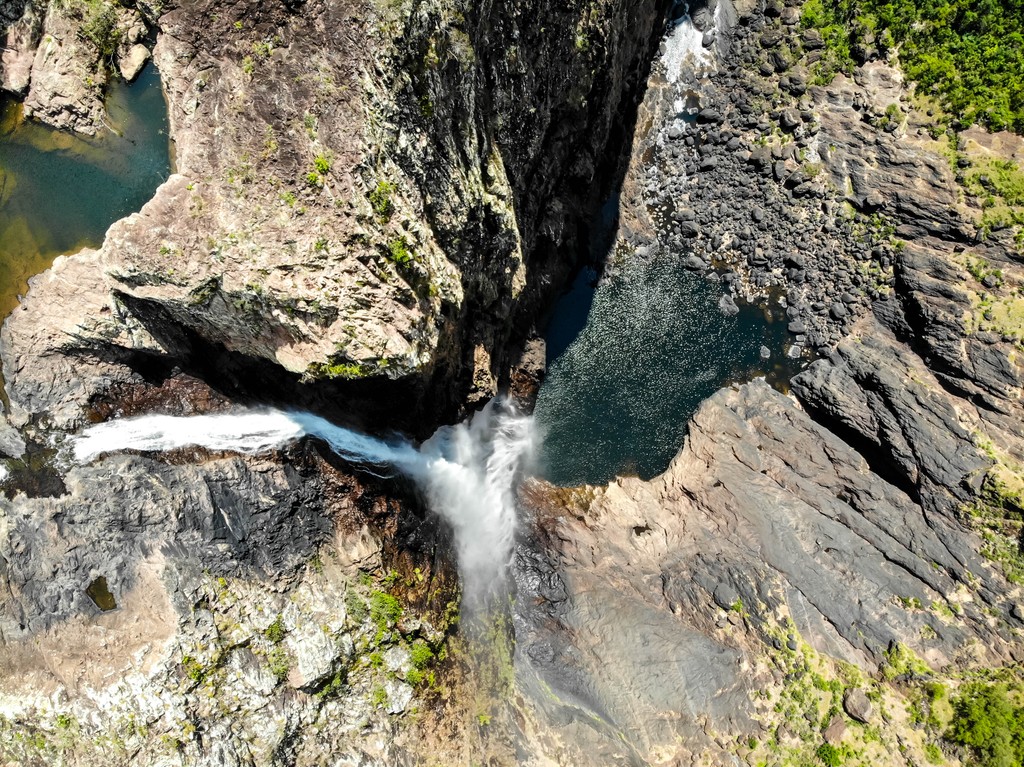 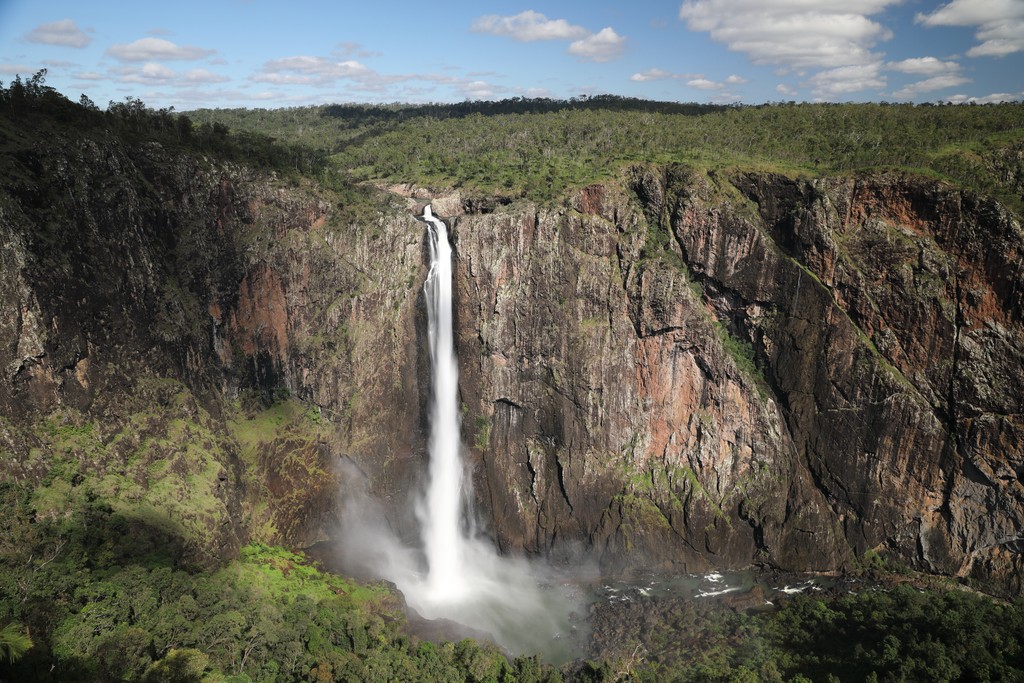