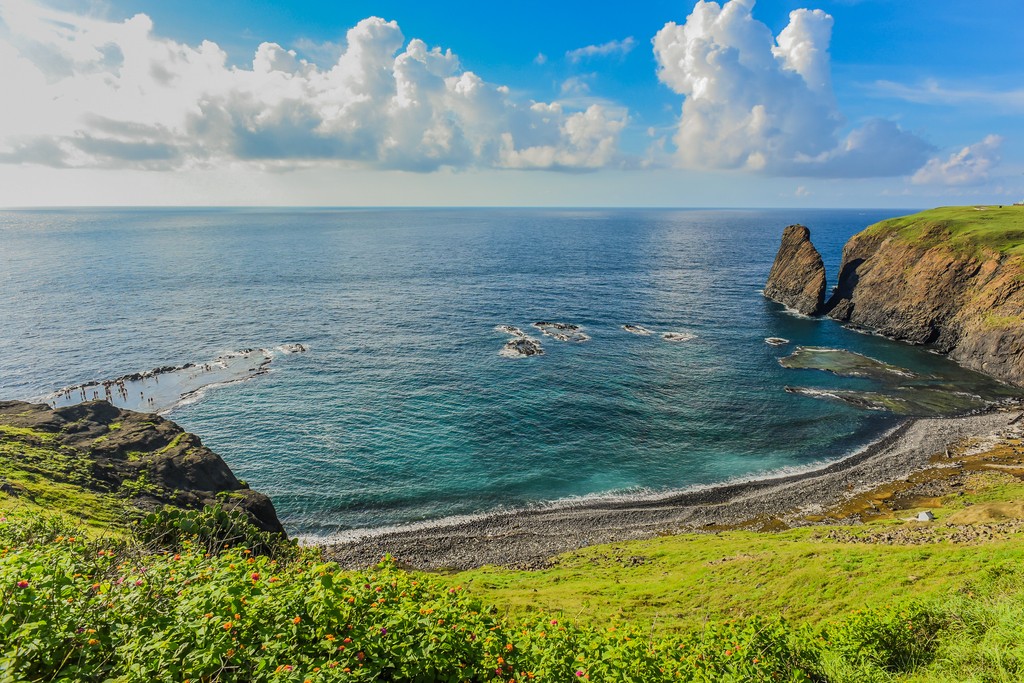 One of Taiwan’s best-kept secrets, tourists fall in love with Penghu’s stunning landscape and natural wonders. Some notable attractions are the white-sand Jibei Beach (吉貝沙灘) in the north and the South Penghu Marine National Park (澎湖南方四島國家公園) down south. Columnar Basalt Nature Reserve (澎湖玄武岩自然保留區) is in the east, while the striking Whale Cave (鯨魚洞) sits in the west.

Around 8 to 17 million years ago, a volcanic eruption created the offshore island of Penghu. Penghu County is mostly low-lying and gently undulating. Its rock bed comprises basalt mixed with sandstone and mudstone from the Miocene epoch.

Its coastal rocks are mostly weathered by the fierce current, with many wave-erosion cliffs and platforms along the sandy shore. The striking basalt columns are iconic of Penghu, weathered elements from wind and waves.

Penghu’s acidic soil and salty sea winds do not nurture plant growth. Despite this, flora has flourished in Penghu County, but with special aid. Farmers built high walls around their crops to protect them from the intense sea gale.

The most common tree is the Japanese pagoda tree, planted here by the Japanese. This arboreal is drought tolerant, so it has managed to grow in Penghu’s thin soil that holds little water.

Coastal plants that flourish along Penghu’s shores are beach morning glory, Myoporum bontioides, Scaevola hainanensis Hance, and variable glycine. In addition, Penghu has 40 species of seaweed, such as Cyanobacteria, red algae, and fucoid.

In terms of wildlife, there are 700 kinds of fish in Penghu’s waters, where green turtles lay their eggs. Bottle-nose dolphins are a standard feature on Penghu’s beaches, as are smaller false killer whales.

Archaeologists have uncovered prehistoric life in Penghu County with the discovery of the Penghu 1 fossil. The jaw bone fossil is believed to be from the hominin species that lived during the mid to late Pleistocene epoch, between 11,700 to 129,000 years ago.

Han Chinese immigrants settled in Penghu in the 9th and 10th centuries. However, it was only in 1281 that Penghu aligned with the Yuan dynasty. Communities grew gradually as farming life was hard in Penghu with its forceful winds and thin soil.

During the Ming dynasty, Penghu’s residents were forced to evacuate under the maritime ban. This was enforced as privacy proved problematic in Penghu and the Ming dynasty wanted to stop illicit trading.

Once the ban was lifted, fishing communities were again established under the watchful eye of military police. Before the Dutch set foot in Taiwan, they captured Penghu County. However, the Fujian governor forced the Dutch from Penghu to where they settled in Tainan City (臺南市), as Penghu was still under the Ming dynasty’s reign.

During the Japanese Occupation Era, Penghu County fell under Japanese governance. The Japanese used Penghu’s offshore location to attack any Chinese fleets heading to Taiwan. Once the Japanese fled Taiwan, Penghu ceded to the Republic of China.

While Penghu County doesn’t have many hiking trails due to its small size and somewhat inaccessible land, there are many beautiful places to explore. The best of Penghu’s natural wonders are:

Situated in Penghu’s southernmost waters, South Penghu Marine National Park comprises four main islands and its surrounding waters. Included in the park are other smaller islets. You can only arrange a visit by tour due to its remote location.

While the islands were once inhabited, very few people live there. This is mainly because they’re distant from Penghu’s larger islands up north and are much smaller. Hence, they provide little protection against the elements. South Penghu Marine National Park’s main attraction is its underwater coral reefs and basalt columns.

Snorkel in the clear waters and view the pristine coral reef, unaffected by the islands’ low human population. From your island cruise, you can observe the landforms of all the islets featuring weathered rocks. You can climb the undulating land on the four main islands and gaze over the Taiwan Strait for exceptional views.

Penghu County is synonymous with the basalt volcanic pillars that line the coast. While there are many places where you can observe this natural showpiece, the Daguoye Columnar Basalt (大菓葉玄武岩) is the most accessible spot on Penghu’s many islands.

Situated in Xiyu Township, which links to Baisha Township and Penghu’s city of Magong, Daguoye Columnar Basalt was only discovered during the Japanese Occupation Era. When the Japanese wanted to build a roadway linking Xiyu Township to Magong City, they dug the ground to prepare for construction. What they found fascinated their eyes.

These igneous rock pillars are dried basalt lava. As the lava cools into rock, the hexagonal shapes formed from a process called columnar jointing. A natural phenomenon, these angular rocky strips attract droves of tourists to see the striking columns with their own eyes.

Another of Penghu’s natural attractions is Whale Cave. Dark basalt rocks adorn the coast, which has been weathered and eroded to form a hollow cave. Locals believe the grotto formed from a whale bumping into the rock, which is how it was named.

Take the paved path to the oceanside cavern and marvel at the colossal basalt rocks that are bigger than you. You can climb onto the volcanic cave and explore its lumpy and rocky terrain. Beyond the Whale Cave is a sandy bay of honeycomb-weathered rock where you can take a walk and admire the punctured, pockmarked coastline rock.

On Penghu’s southernmost island of Cimei lies the double heart-shaped stone walls in the breakwaters. Formed of basalt and coral reef, this exposed rock creates an intertidal pool at low tide. Fish and other small sea creatures are thus trapped in the stone weir when the tide ebbs.

In earlier times, when Cimei fishermen were so poor they had no boats to head to sea, they used the stone weirs to catch fish. They’d wait for the tide to retreat and catch fish from the sea animals trapped in the reef walls.

Huxi Township’s golden sandy bay was not always a scenic shoreline strip. It used to be a wasteland where illegal gravel mining took place. With the onslaught of typhoon season every year, the storms ravage the coastal area, creating a mess.

Aimen Beach’s (隘門沙灘) pristine paradise involved human effort. A Magong local felt the shoreline held promise for a beautiful bay, and thus he cleaned up the old barren land with a vision in mind. Locals helped him carry nearby shell sand to cover the shore, and they set up silt fences to protect the beach from summer storms.

People can now enjoy this heavenly coastline of sandy shores and cerulean sea and look out onto the horizon towards Taiwan’s island. Aimen Beach is translated as Love Gate Beach, as creating this scene was a labor of love. Take a trip to this pure wonder to applaud Penghu’s residents’ efforts to create such a stunning scene.

On Xihu Township at the southern coast are the stone pillars called the Three Immortal Pagodas (三仙塔). These hilltop mounds were erected as shrines to protect the islands’ men. As men would go out on fishing boats, they had more chance of meeting death than their female counterparts on land. Thus, the Three Immortal Pagodas guard the islands’ industrious men as they leave the shores to provide for their families.

While the pagodas are culturally significant, another reason to visit the pillars is to admire the view from the coastal hill. Visitors claim the outlooks onto the charming seaside Wai’an Village (外垵村) resemble Greece’s Santorini Island. The most beautiful time to admire the view is at twilight when the hamlet’s lights reflect in the still harbor waters.

If you want to witness Penghu County’s liveliest neighborhood, it's best to stay in Magong City. From bustling night markets, creative spaces, and informative galleries, get swept away in this fascinating city.

Possibly the best place to learn about Penghu's history is the Penghu Living Museum (澎湖生活博物館). Once off the plane, head to this center to educate yourself on Penghu's rich past and the islanders' culture. The pride of Penghu County, even the locals recommend a visit here. Many exhibits portray island life from many eras ago to modern times. Ancient artifacts such as pottery, tools, and even old fishing boats are also displayed.

After acquainting yourself with Penghu's past, check out Penghu's bohemian scene at Duxingshi Village (篤行十村). Once a military dormitory for Penghu's police, the old bunker underwent a magical transformation and a renewed breath of life. Now a cultural village, wander around the artsy enclave where you can stop for coffee, sample Penghu's street food, or browse the curiosity boutiques. It's a charming revamp of what was a crumbling eyesore.

A close walk away from Duxingshi Village along Magong's esplanade is the striking Penghu Tianhou Temple (澎湖天后宮). Experts determine the temple dates back to 1604, making it the oldest temple in Taiwan. The temple is beautifully ornate and dedicated to the Goddess of the Sea. Locals believe she protects fishermen heading out on boats every morning. Featuring detailed wood carvings, so exceptionally preserved, and strings of illuminated red Chinese lanterns, it is worth a visit to marvel at the elegant temple.

Lintou Park's (林投公園) overgrown flora is a welcome respite in the Penghu heat. It's the only spot on the entire island that is shaded by a casuarina forest. In fact, it is the only park in Penghu County. Have a scenic stroll in the 1 ha (2.5 ac) woods and admire the coastal scenery of blue waters and golden sandy beaches from the evergreen grove. On your walk, you can see Penghu's old military relics displayed in the park, such as cannons, airplanes, and chariots.

Finally, head to Longmen Beach (龍門沙灘) for a beautiful beach walk. Quite secluded compared to more central bays, you get to enjoy the beach for yourself. The fine white sand glitters against the turquoise sea. One of Longmen Beach's highlights is its quirky bathrooms. Designed as a battle tank, the coquina walled structure attracts a large hype from the people who visit. Be sure to take a snap of the rather strange yet admired piece of architecture.

Getting to Penghu County isn’t as simple as boarding the Taiwan High-Speed Rail or local express train. You can only reach Penghu by sea or by air. Ferries depart from Chiayi and Kaohsiung ports, taking you to Magong City. If you would rather hop on an airplane, you can fly to Penghu County from Taipei, Taichung, Tainan, and Kaohsiung airports. 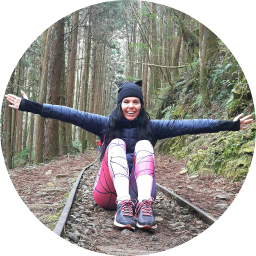 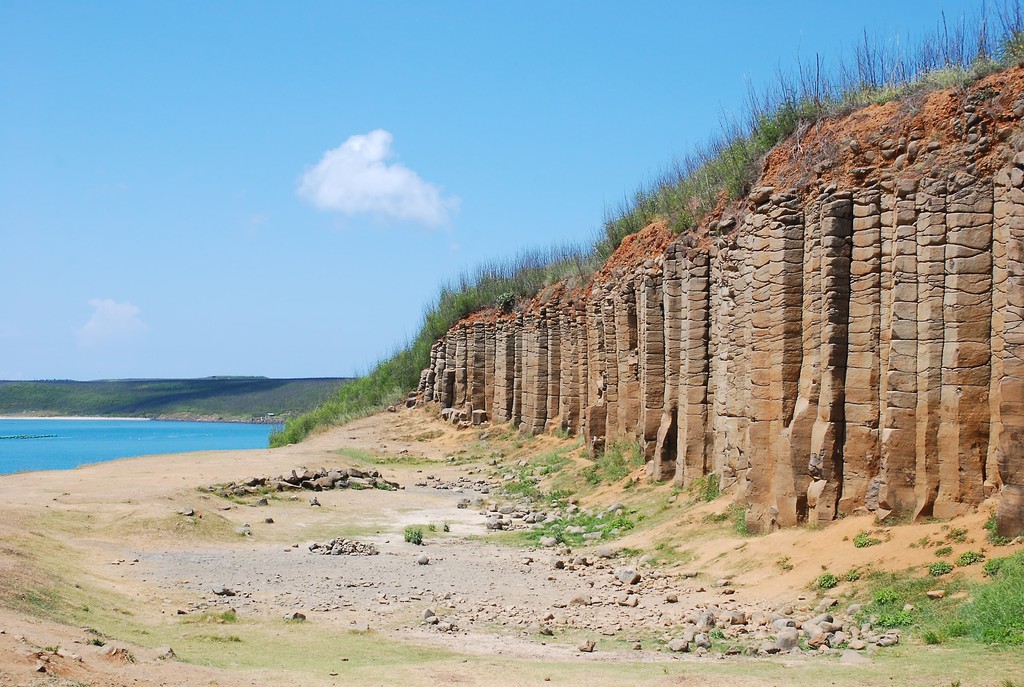 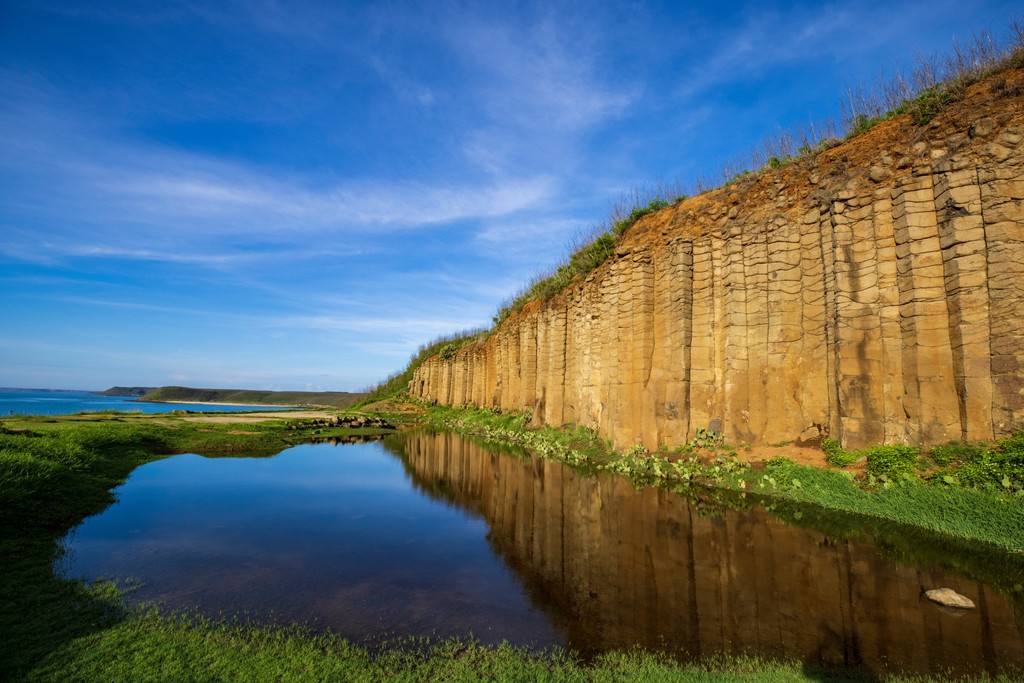 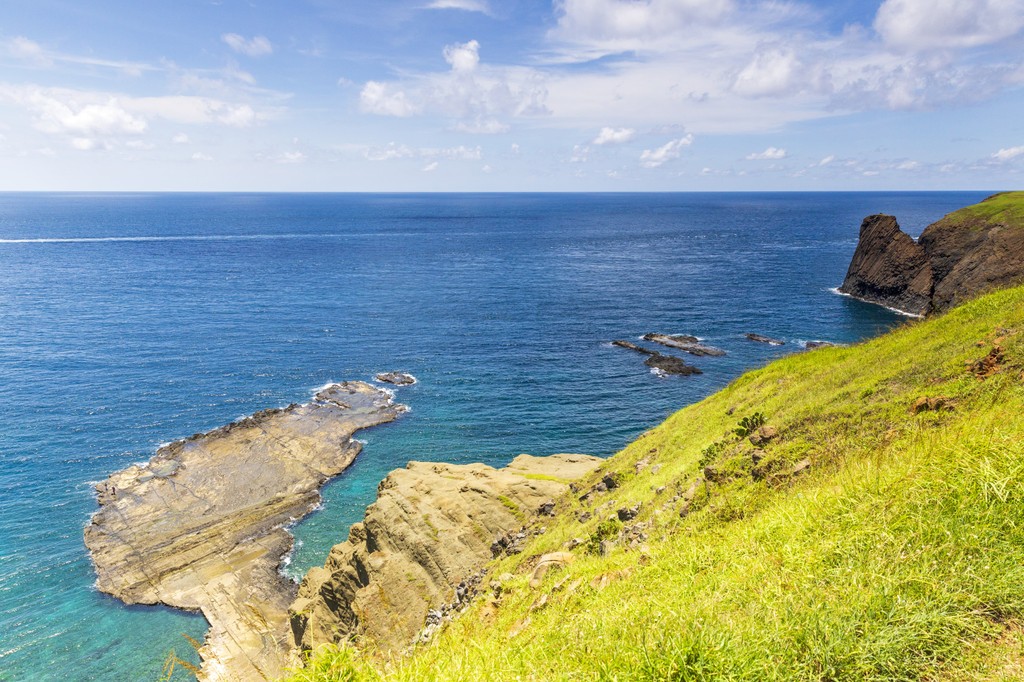 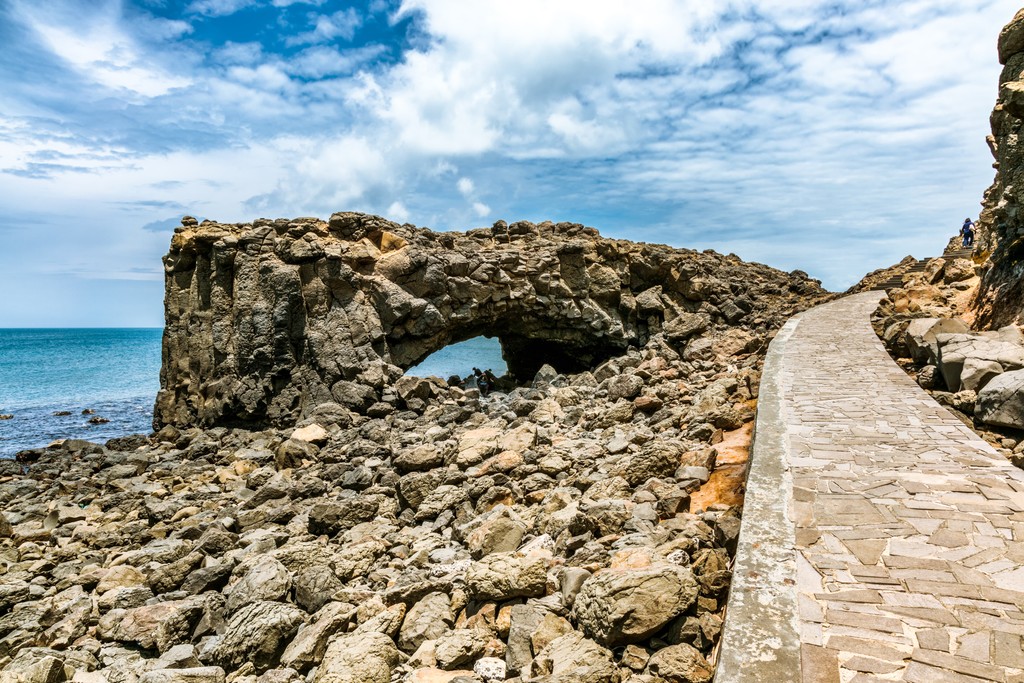 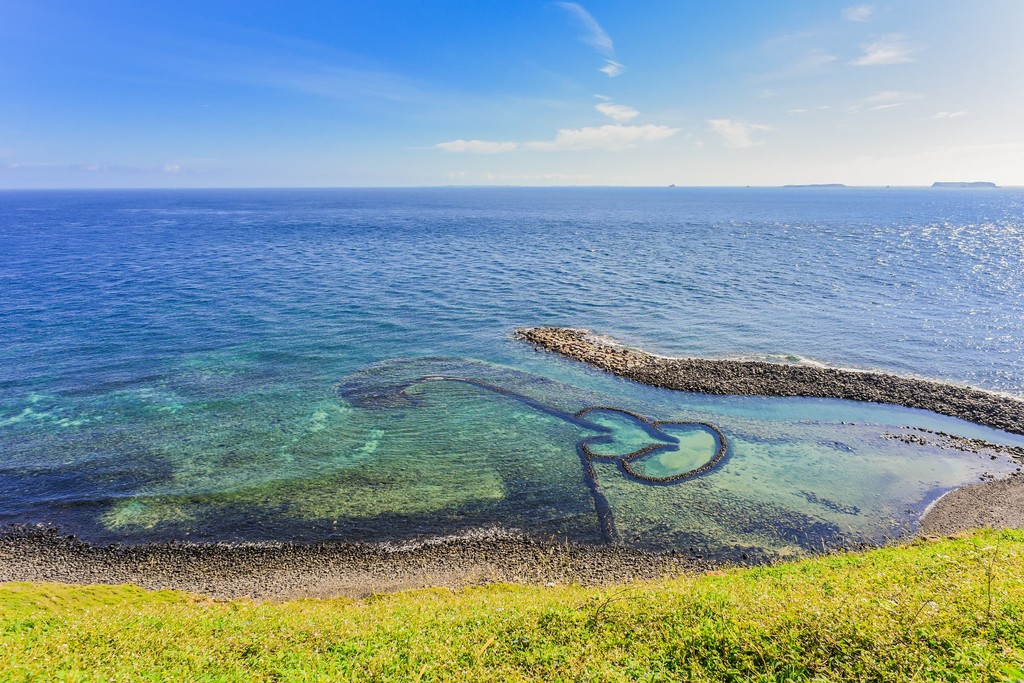 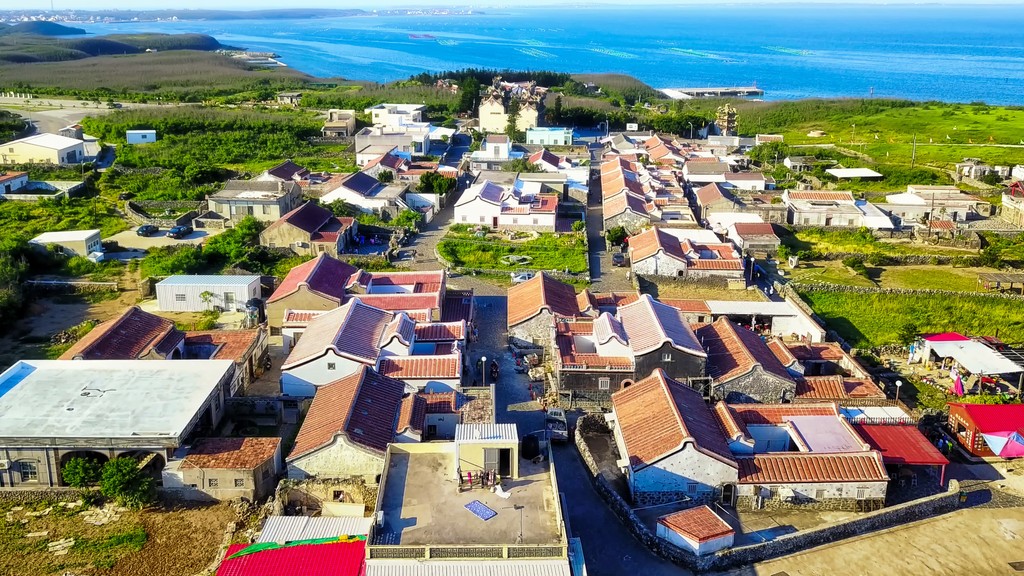 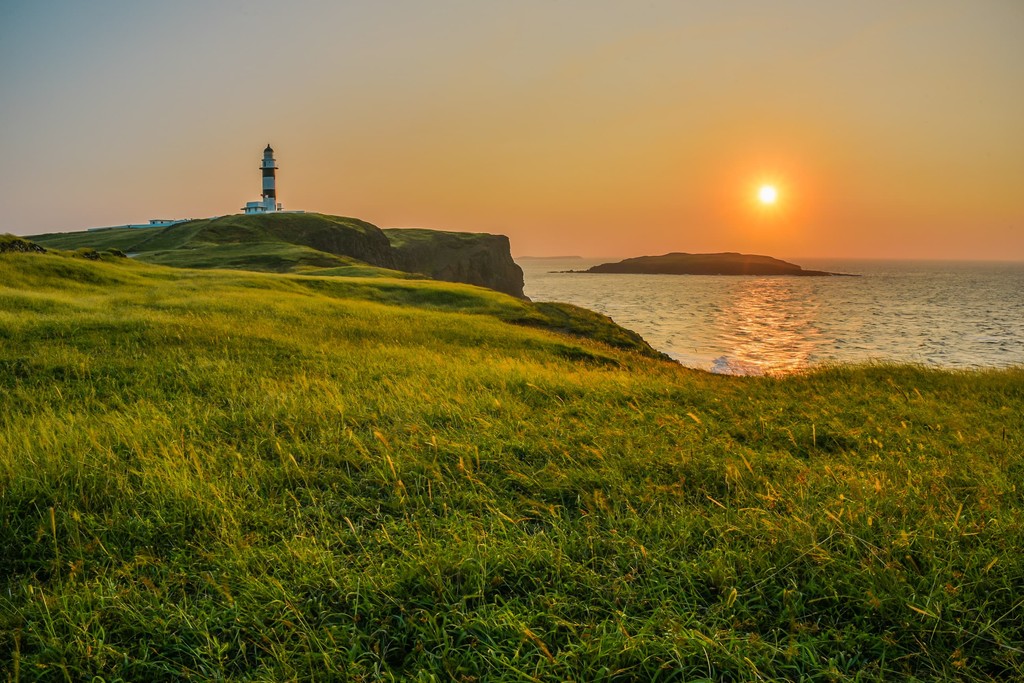