Named to honor the 16th president of the United States, Abraham Lincoln, Lincoln County was created by the Oregon Legislature in 1893. Covering over 980 square miles of Oregon’s scenic coastline, Lincoln County is one of the most popular tourist destinations in the state.

Lincoln County is bordered by Tillamook County on the north, Polk and Benton Counties on the east, Lane County on the south, and the Pacific Ocean on the west. Like Tillamook County, when Lincoln was initially established, it was isolated from the rest of the state. The Coast Highway, completed in 1925, and the Salmon River Highway, completed in 1930, improved inland transportation. 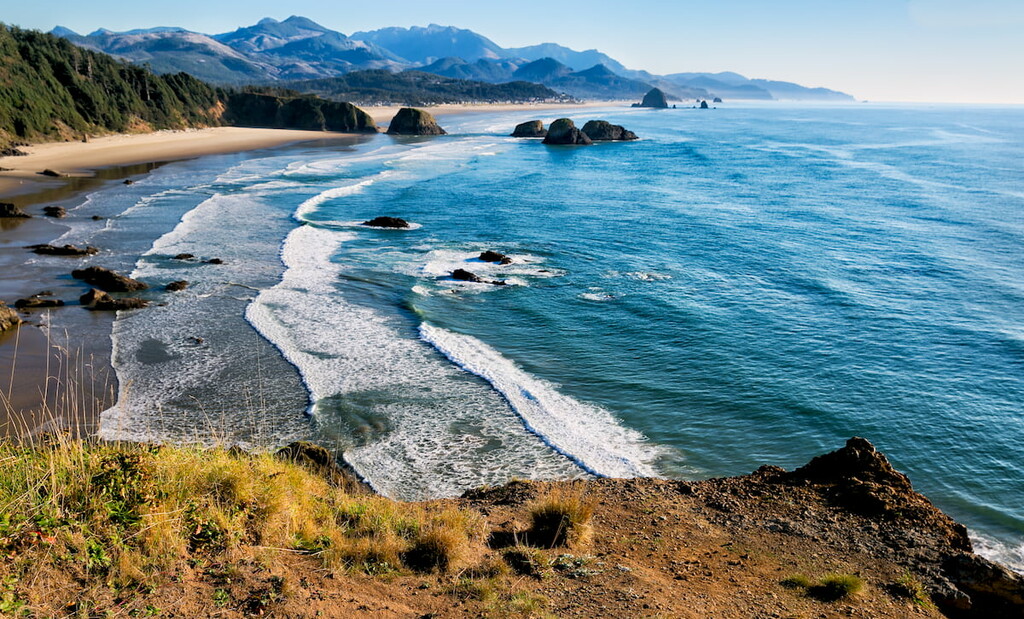 Located on the summit and western slopes of Saddle Bag Mountain, the 300-acre Saddle Bag Mountain Research Natural Area (RNA) was established in 1983 to protect one of the last remaining stands of Pacific silver fir in the Oregon coastal mountains.

Just 27% of the 630,000-acre Siuslaw National Forest lies in Lincoln County. However, the largest rainforest in the Coast Range is tucked in the Drift Creek Wilderness and several scenic footpaths meander through the towering Sitka spruce and western hemlock in the area.

Along the coast, impressive headlands extend into the Pacific Ocean. Yaquina Head, the site of the 93-foot Yaquina Head Light, offers a variety of coastal hiking, whale-watching, and sightseeing. Nearby, visitors can experience the restless Pacific Ocean slam into a hollow bowl-shaped rock formation in the Devil's Punch Bowl State Natural Area or explore one of the county’s many beautiful beaches.

Located in the Siuslaw National Forest, Drift Creek Wilderness encompasses 5,798 acres of the Oregon Coast Range. Though the forested hills of Drift Creek barely reach above 2,000 feet, the Wilderness is characterized by long, steep slopes and rugged terrain. There are roughly 8.5 miles of trails tucked within the park, including the Horse Creek Trail and Harris Ranch Trail.

One of the most popular hikes in the area, the Drift Creek Falls is a lush, forested footpath that leads to an impressive 66-foot waterfall. The trail was completed in 1997 and is well-maintained. The trail travels directly through 70-year-old Douglas-fir, western hemlock, and Sitka spruce, before reaching a suspension bridge towering over Drift Creek. Hikers can soak in views of Drift Creek Falls from above or continue further down trail to get a closer look at the falls from the creek below.

For expansive views of Oregon’s craggy coastline, coves, and offshore sea stacks, consider making the trip to God’s Thumb. The trailhead to ‘the Thumb,’ has been rerouted over the years. To reach the trailhead, drive to a parking area located on northeast Devil’s Lake Blvd. Though odd, the trail begins in an empty cul-de-sac. Follow signs for ‘The Knoll,’ another scenic trail that leads to sweeping views of Lincoln City. Continue beyond ‘The Knoll,’ through the forest, to reach God’s Thumb.

Located between Tillamook and Newport, Lincoln City is bordered by 680-acre Devils Lake, the Pacific Ocean, and the Coast Range. Lincoln City is home to miles of beautiful beaches and is known as an artsy enclave on the coast. Devil’s Lake and Siletz Bay offer plenty of open water for fishing, swimming, and watersports, while Drift Creek Falls and Cascade Head give avid hikers and outdoor enthusiasts a reason to lace their hiking boots.

Known as the ‘Dungeness crab capital of the world,’ Newport is the coastal county seat of Lincoln County. Newport is home to a number of popular attractions, including the Oregon Coast Aquarium, Nye Beach, Yaquina Head Light, and the Pacific Maritime Heritage Center. Fishing and crabbing are a major part of the city’s identity and there are plenty of places where visitors can collect crab directly from the docks of Yaquina Bay.