Savoy Prealps (Préalpes du Savoie in French) are a mountain range in the north-western part of the Alps with 762 named mountains. These mountains are primarily located in the Auvergne-Rhône-Alpes region, but also spread into Valais (western Switzerland). The Savoy Prealps area consists of the Isère, Savoie and Haute Savoie regions in France, and also the Canton of Valais in Switzerland.

The Savoy Prealps encompasses, from west to east, the mountain ranges of: the Chartreuse Regional Natural Park, the Bauges Massif, the Aravis range and the Chablais mountains on the Swiss border.

The highest mountain in the Savoy Prealps is the Haute Cime, situated in the Chablais mountains in Switzerland. It is a multi-summited mountain with seven distinct peaks referred to as the Dents du Midi (translated to the Teeth of Midday in English). The mountain reaches a height of 3257m. It is the highest mountain between Lake Geneva (north-west) and the Mont Blanc Massif (south-east).

The Savoy Prealps is all encompassing, with various mountain activities spanning the whole range. In the west, a short bus ride (costing only 1.50€) from Grenoble, the Chamechaude is locally known for the cross country trails around its base during the winter and its expansive hiking trails during the summer. Along the Chartreuse range to east is the Dent de Crolles (tooth of Crolles), one of the most recognisable mountains in the Grésivaudan valley between Grenoble and Chambery. In its shadow is the small village of Saint-Hilaire which annually hosts the world renowned ‘Coup Icare’: a world free flight event, where the best hang gliders and paragliders from around the globe compete.

Featuring a cluster of ski resorts: Les Gets, Morzine, Avoriaz, the Aravis range is a haven for winter sports. On a clear day, the peaks in both the Aravis and Chablais mountains provide a beautiful vantage point of lake Geneva to the north and Mont Blanc to the south.

With the numerous ski-resorts in the area, there are a number of cables cars in the various resorts offering a simpler way of ascending many of the peaks during both winter and summer. The smaller resorts in the Chartreuse are seasonal, operating primarily during the winter months.

Chamechaude: The highest point of the Chartreuse at 2082m, the Chamechaude is a regular feature for many Grenoblois hikers. Accessible by road from the Col de Porte, the Chamechaude is only 15km out of town from Grenoble. There is a bus (1€50 single, 3€ return) that leaves from Grenoble Museum to either Sappey en Chartreuse, or to the parking area at the Col de Porte. From the Col de Porte there is a trail of 7.7km with 786m of vertical elevation. This route is difficult due to several steep passages with loose gravel. Access to the summit is via a passage with a cable. Once at the peak, breathtaking views across the Gresivaudan valley await. (Est. time 4h15) 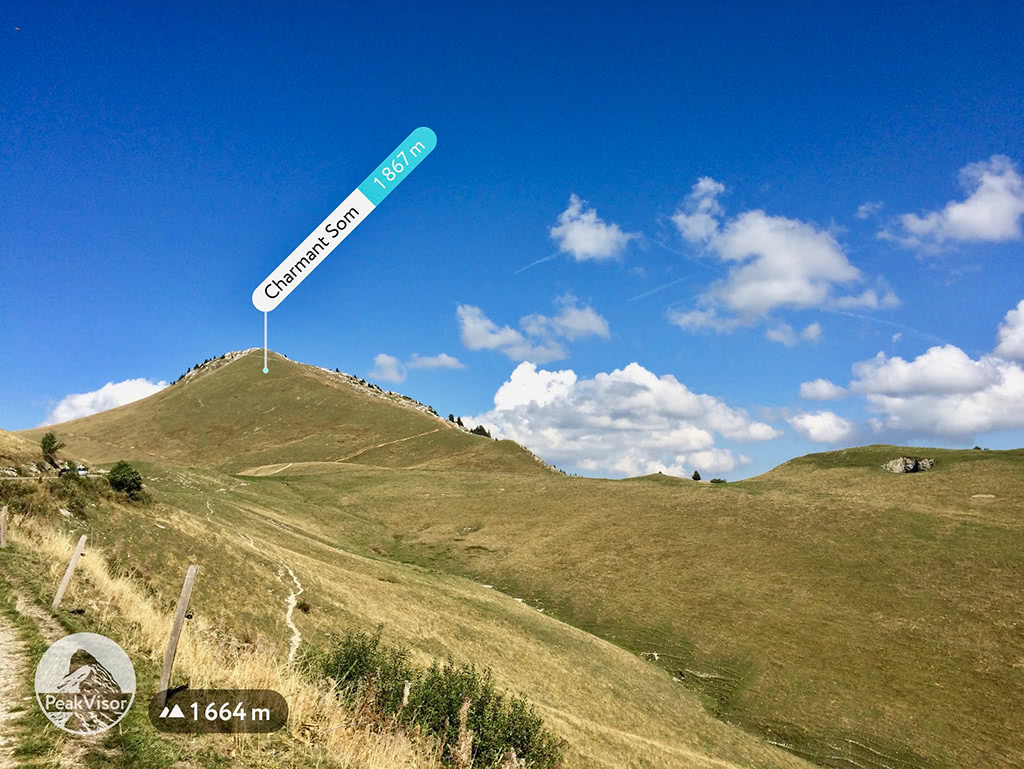 Charmant Som: Behind the Chamechaude and the Dent de Crolles, the Charmant Som (1867m) is one of the most dominant summits of the Chartreuse. It is the most accessible of the three, with a road leading within touching distance of the summit. The beautiful panorama offers a vantage point over the Chartreuse, and provides unobstructed views of the Chamechaude and Dent de Crolles. From the parking, the trail of 2.7km with a total vertical elevation of 200m is ideal for families. (Est. time 1h30) 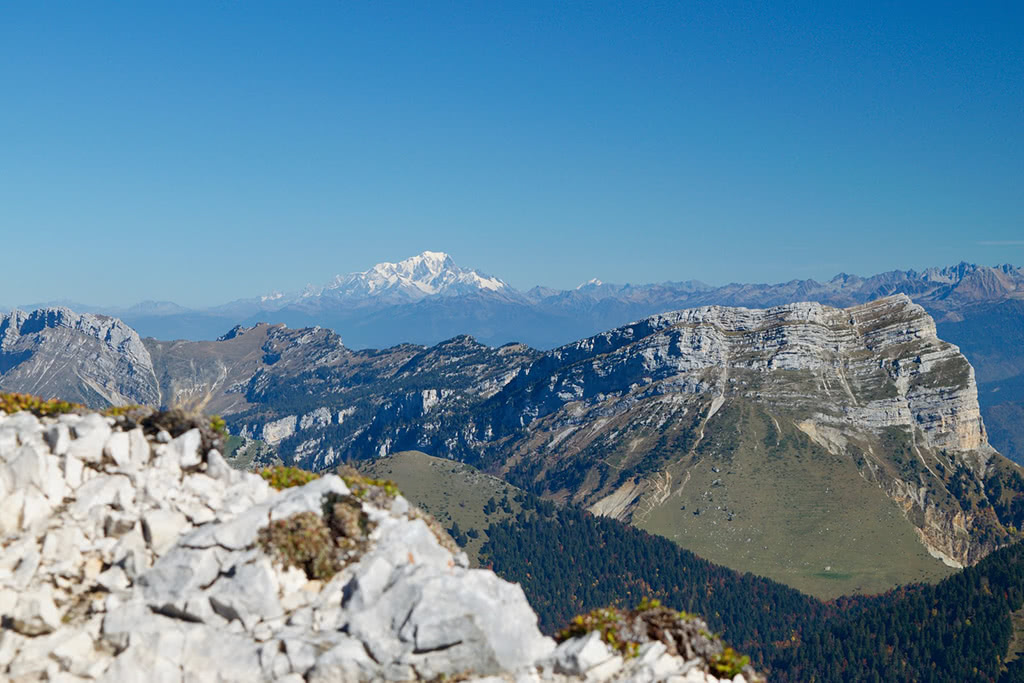 Dent de Crolles: The second highest peak of the Chartreuse (2062m). This 8.9km loop starts at the parking area at the summit of Col de Coq. This loop can be done in either direction, however it is advisable to climb by the western face due to a difficult section where climbing via a metal rope is necessary. Once the trails reaches the summit, their is a more gradual descent on the plateau to the north. With 893m of vertical elevation, and several steep sections with loose gravel, this route is recommended for experienced hikers. (Est. time 4h45) 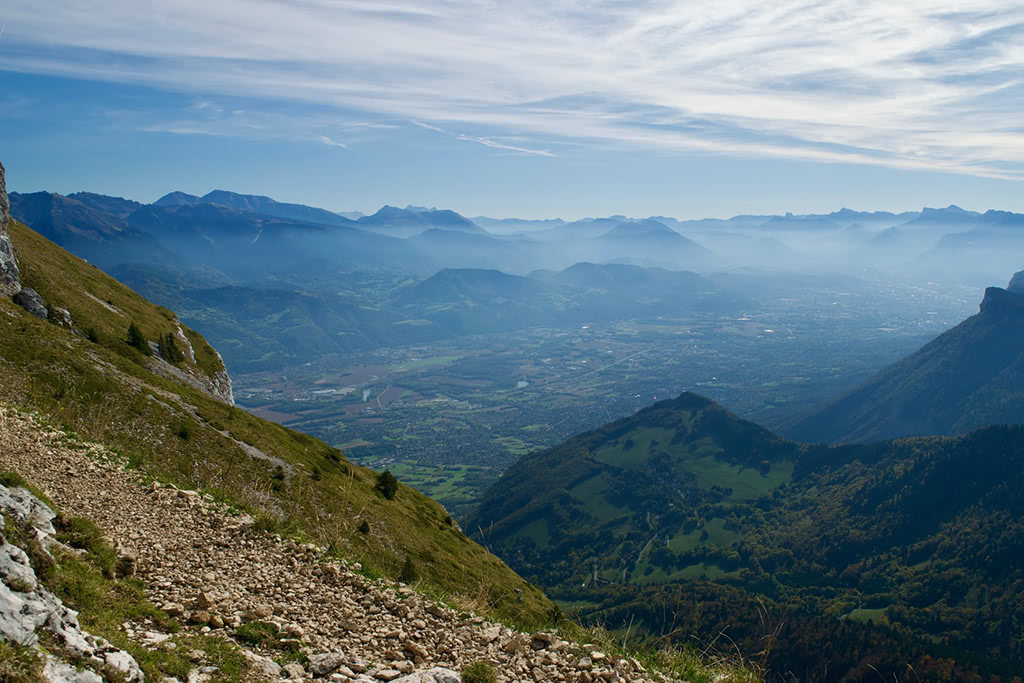 Tour Sallière: The second highest mountain of the Swiss Faucigny after the Haute Cime of the Dents du Midi, the Tour Sallière is a huge pyramid. The northern ridge stands between the valley of Susanfe in the west and Salanfe in the east. The Salanfe face, named Grand Revers is a 1300m high wall. The ice-covered western ridge spreads to the Mont Ruan and the french border. Starting from Champery there is a trail that leads you to a crossroads, where you can either turn back to complete a trail of 20.4km with 1416m of vertical elevation, or you can continue on to summit Haute Cime by adding 4km total distance and an additional 800m of vertical elevation. Either of these routes are extremely difficult and are advised only to highly experienced mountaineers. The estimated times are 8hrs for the 20.4km trail and 11hrs for the 24.4km trail. With the majority of the trail at well above 2000m, this route will literally take your breath away.

Mont de Grange: At 2432m, the Mont de Grange is the highest point of the Abondance region. This summit is the ideal vantage point to capture the Haute Cime and its seven peaks, across the Swiss border, in all of its glory. With the Haute Cime being such a prominent mountain (3257m), a tour around its base, whilst albeit impressive, would not do the mountain justice. It is arguably best observed from a distance to look upon it in all its splendor. The hike of the Mont de Grange is 12.96km in length with 1099m of vertical elevation to the summit. Reaching the peak at 2432m will take your breath away! This route is recommended for experienced hikers. (Est. time 6h20)

La Pointe Blanche: A beautiful route accessible via the Col de la Colombière. The highest peak of the Bornes massif, the Pointe Blanche (2438m) offers a fantastic panorama both on the Aravis mountain range and the Mont Blanc massif on one side, and the Arve plains on the other. The proposed route is 5.37km in length with 838m of vertical elevation. Due to its very steep gradients, this is a very difficult climb recommended for highly experienced hikers. (Est. time 3h30) 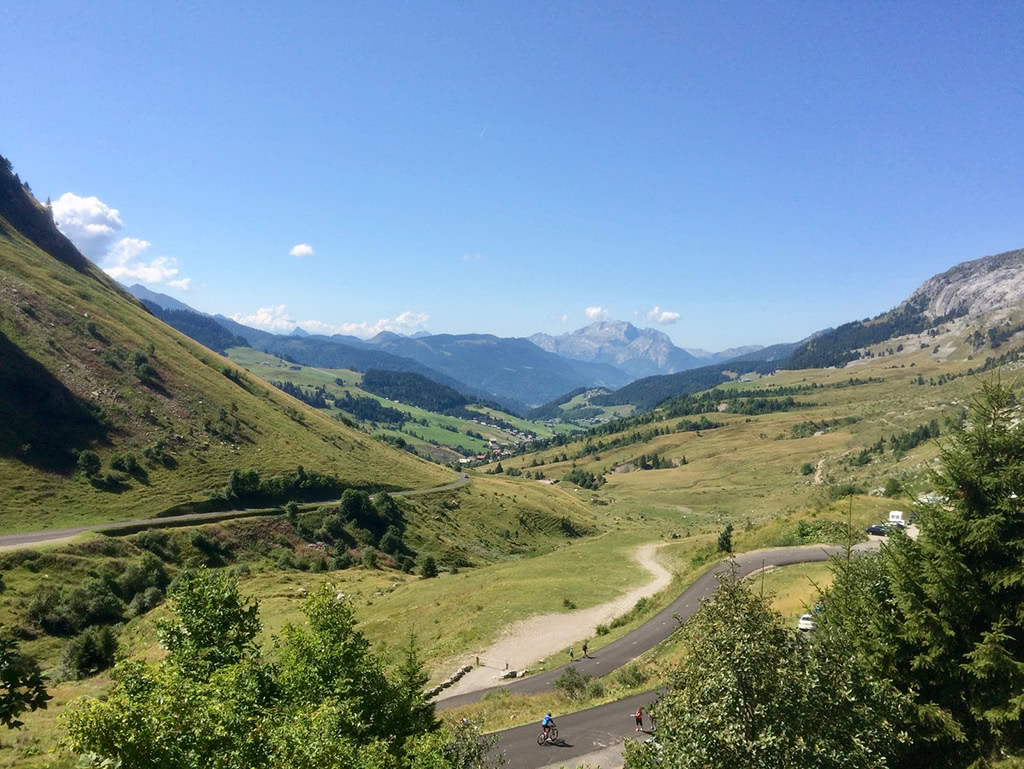 The view from the Col de la Colombière, the base of the climb up to the Pointe Blanche.

Grenoble is the largest city in the region. It is ideally suited as a basecamp for not only excursions in the Savoy Prealps, but also the Dauphiné Prealps to the west and the Dauphiné Alps to the south. Grenoble airport is the closest airport to the Chartreuse range and is open all year round, however primarily catering to ski-resorts in the winter, the summer flights are limited to around 3 per day. Grenoble’s train and bus stations offer further connections to the surrounding mountains and to the wider region. 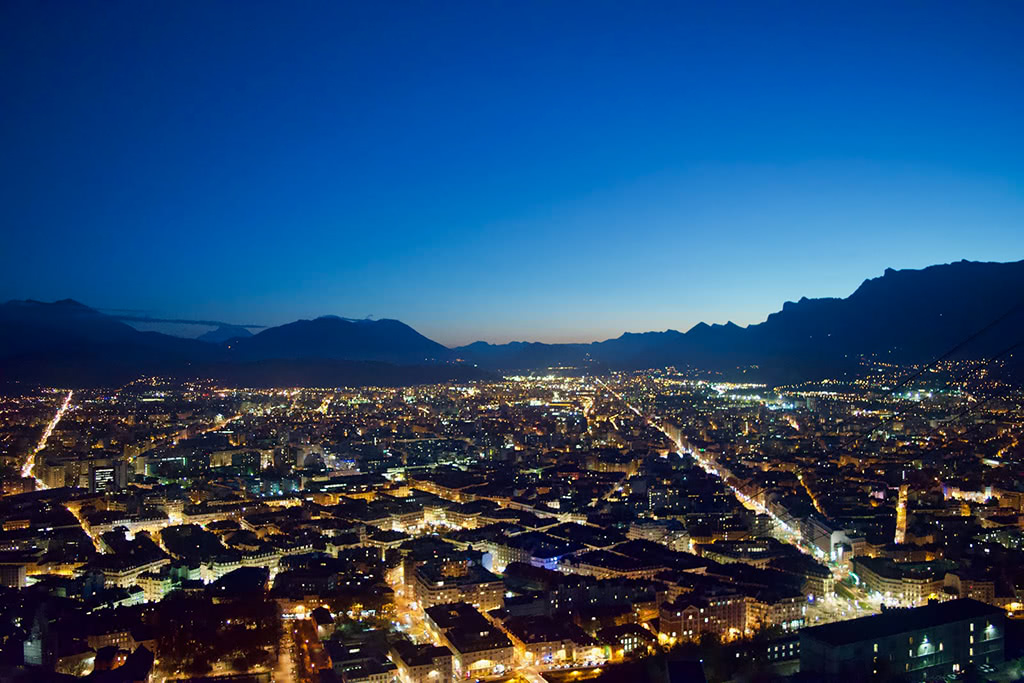 The noctural view of Grenoble from the Bastille

The capital of the Savoie region, Chambery is accessible by train throughout the year and has a small airport that is only open during the winter season. Known locally as the home of the pro cycling team of AG2R La Mondiale. Surrounded by hiking trails, alpine lakes, nature parks and castles, Chambery offers an access point to the Chartreuse to the west, the National Reserve of the ‘Chasse des Bauges’ to the east, and the Lac du Bourget to the north. 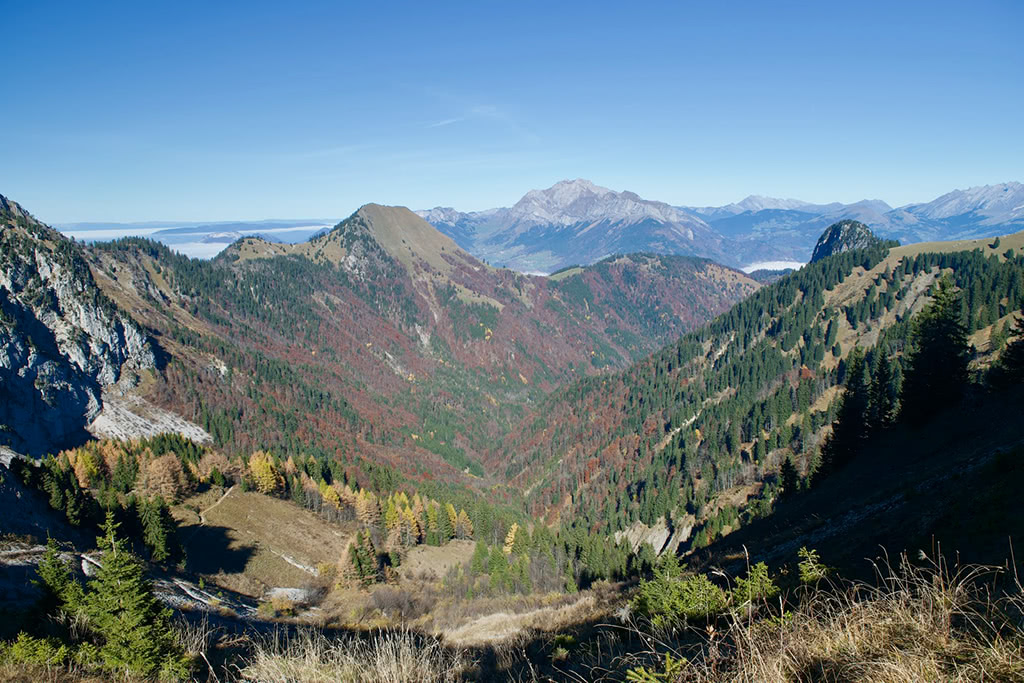 Annecy is situated on the northern shores of the beautifully alpine Lake Annecy. It is the largest city in the Haute Savoie region. A popular tourist attraction in the summer primarily due its outstanding natural beauty, Annecy also offers a wide range of cultural activities in the old town. 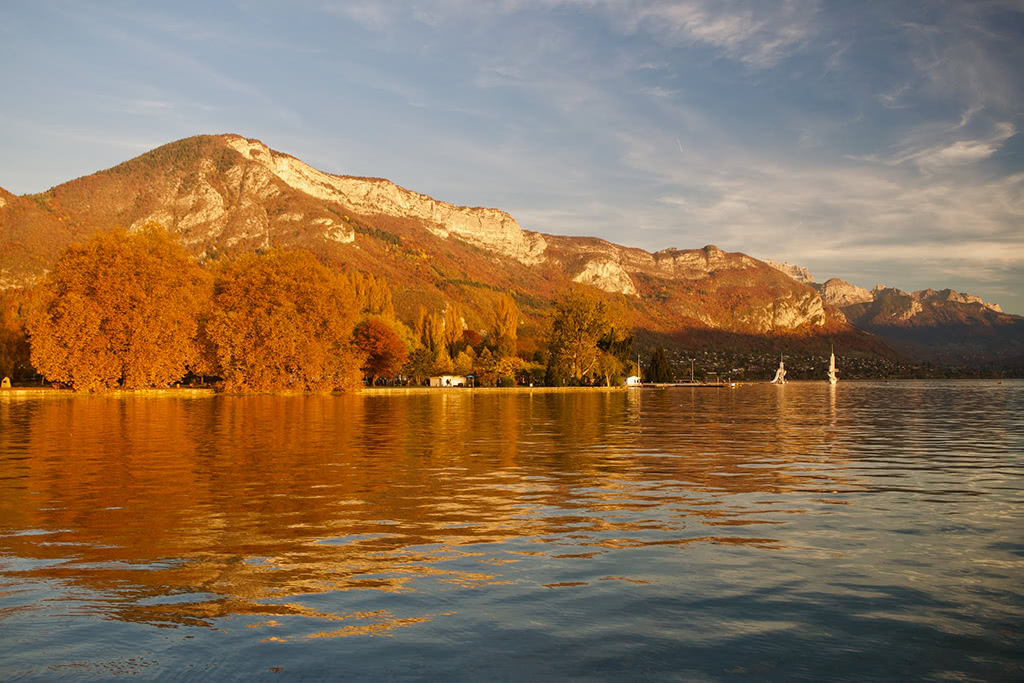 Albertville is best known for hosting the 1992 winter olympics. It has also hosted several editions of the Tour de France, the most recent being 2018 with a stage from Albertville to the Haute Savoie ski resort of La Rosière. Albertville is a gateway into the high mountains, many of which have summits which overlook Mont Blanc in the distance.

Monthey, found in the Swiss canton of Valais is close to the famous winter sports region of the Portes du Soleil. Surrounded by mountain trails to the east and west, with Lake Geneva less than an hour away to the north provides a nice change of pace for water sports lovers. 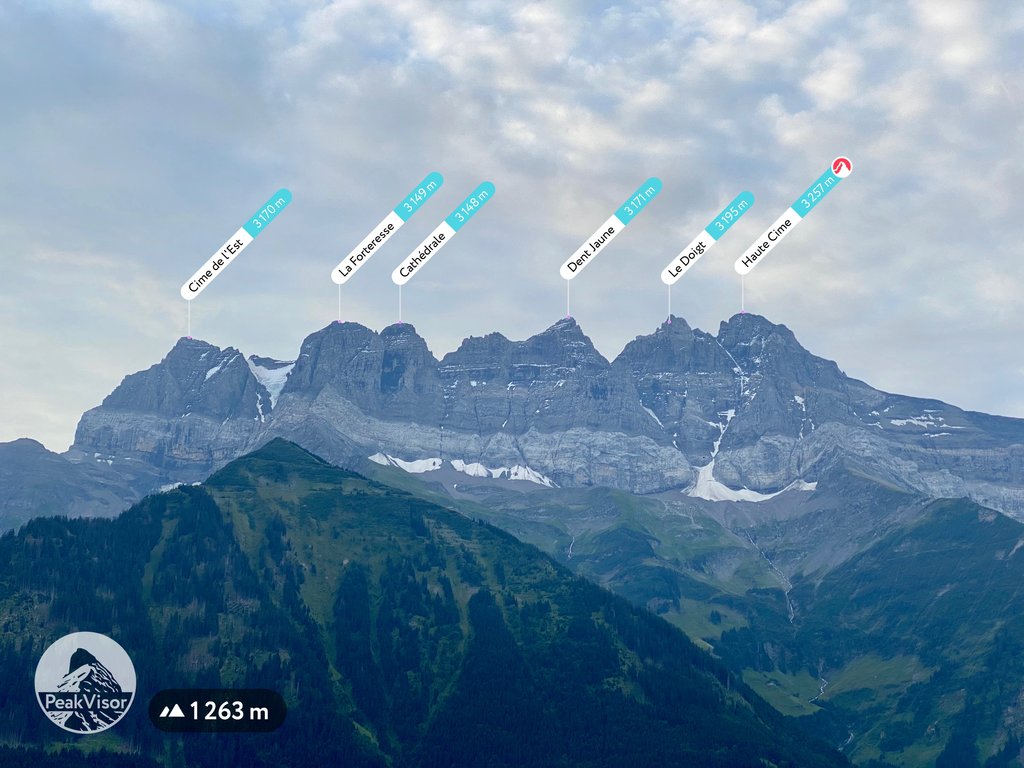