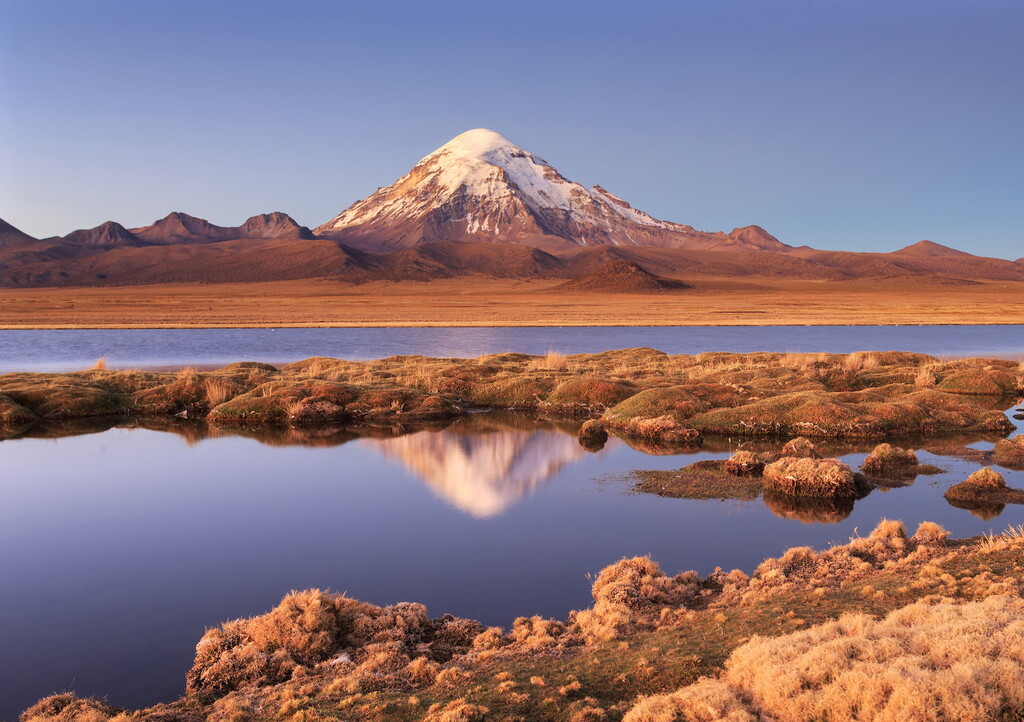 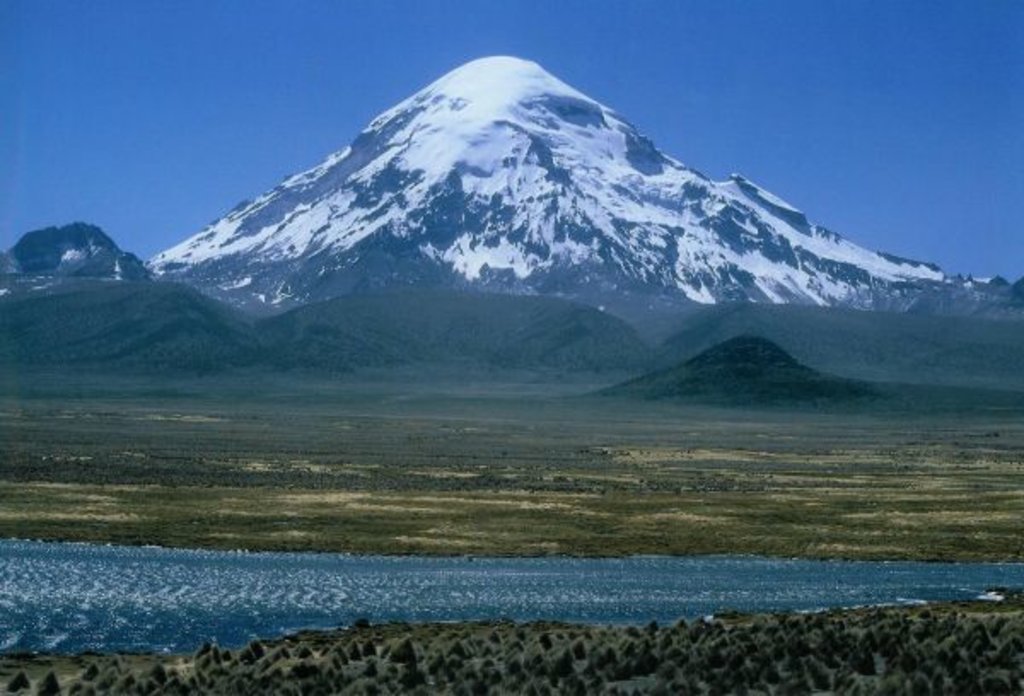 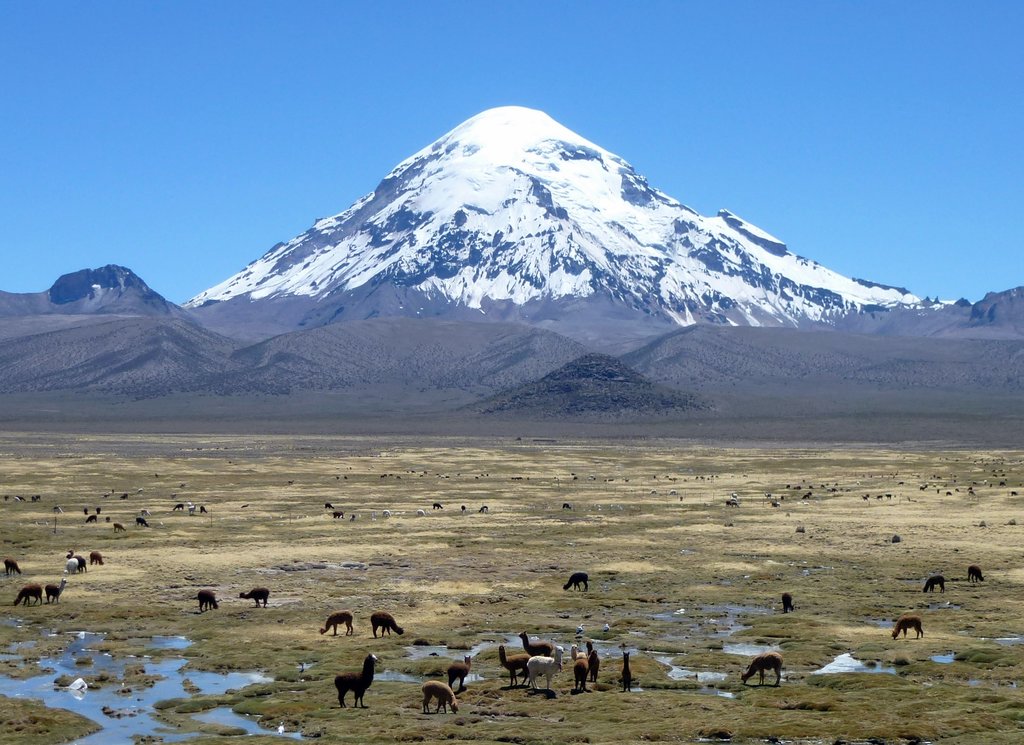 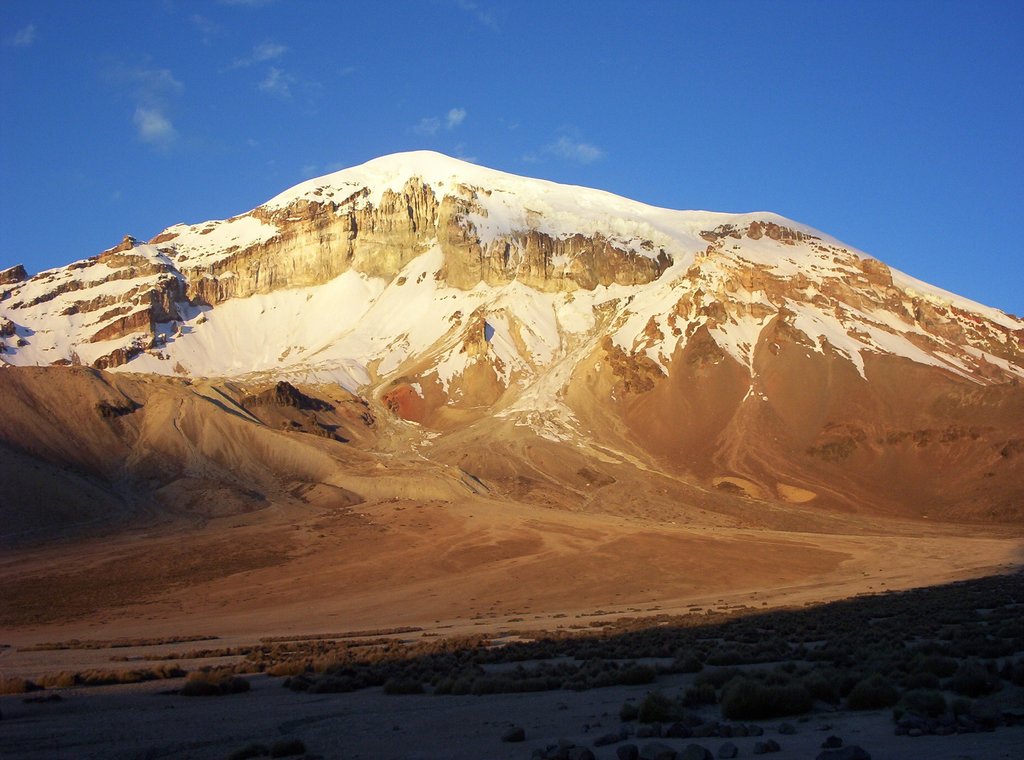 4 icons
6 542 m
Elevation
Elevation is the altitude of a place
above sea level.

2 429 m
Prominence
Peak’s prominence is the least
vertical to be covered to get from the
summit to any other higher terrain.

Proportional Prominence 1 295 m
Ultra
Mountains with prominence of 1 ⁠500 ⁠m / 4 ⁠921 ⁠ft or more.
Volcano
Most commonly a conical hill or mountain built around a vent that connects with reservoirs of molten rock below the surface of the Earth.
Location
-18.108616 S  -68.882505 W

Nevado Sajama is an extinct stratovolcano and the highest peak in Bolivia. The mountain is located in the Oruro Department, Sajama Province, Curahuara de Carangas Municipality, Sajama Canton. It is situated in the Sajama National Park in the southwest area of the country some 16–24 km (10-15 mi) from the border with Chile. The peak is an isolated cone, but is geologically complex, with lava domes of andesitic and rhyodactic composition overlain by an andesitic stratovolcano. The date of the most recent eruption is uncertain, although Holocene activity is assigned to the volcano by many. The treeline of Polylepis tarapacana on the volcano is as high as 5,200 m above sea level, one of the highest altitudes trees can be found growing anywhere in the world.

Joseph Prem made the first attempt to climb the mountain in 1927 by the northwest ridge but was stopped short at 6,200 m. After several more attempts, Prem along with Wilfrid Kuehm reached the top in August 1939 by a more difficult southeast ridge.

From the village of Sajama an acclimatised team can climb the mountain in two or three days if weather conditions are favorable. Currently the easiest of the routes is the SW ridge. This route is technically easy, require some minimal mountaineering equipment and does not present any particular difficulty except some snow slopes up to 45 degrees.

In August 2001, two teams of Sajama villagers and Bolivian mountain guides played a soccer match on top of Mount Sajama in an effort to show that altitude itself is not a limitation to physical strain. Indeed, the objective was to protest against the FIFA decision to discontinue the use of La Paz as a location to hold international football matches, because of its very high elevation.
There's a demanding alpine trail (T5) called Ruta Normal Nevado Sajama leading to the summit.