2 884 m
Elevation
Elevation is the altitude of a place
above sea level.

110 m
Prominence
Peak’s prominence is the least
vertical to be covered to get from the
summit to any other higher terrain.

Proportional Prominence 2 144 m
Location
41.784213 N  23.390605 E
Banski Suhodol (Bulgarian: Бански Суходол) is a peak in the Pirin mountain, south-western Bulgaria. It is located in the northern part of Pirin on the main ridge. Its height is 2,884 m which ranks it on third place in Pirin after Vihren and Kutelo.

To the south-east of Banski Suhodol on the main ridge is located Kutelo peak and the two peaks are linked by the Koncheto ridge — a dizzy karst ridge which on some places is only 70 cm wide.

The north-eastern slope of Banski Suhodol is a vertical 300-meter marble wall that lowers down to the cirque of the same name. There are a lot of places in the cirque where the snow remains the whole year, several karst caves have been discovered there.

The south-western slope drops down to the valley of the Vlahina river at 70°. Although that slope is not so steep as the north-eastern one, the displacement between the peak and the valley below is around 1,000 m and forms a dramatic view. In that direction there is a view to the main summit Vihren and the second in rank — Kutelo, the granite Hvoinati Vrah and Muratov Vrah as well as the secondary Sinanishki ridge with its cirques and ridges and the Vlahini Lakes with the marble peak Sinanitsa in the distance.
There's a demading hiking trail (T3) leading to the summit. Banski Suhodol is one of the 395 peaks along the multi-day European long distance path E4. 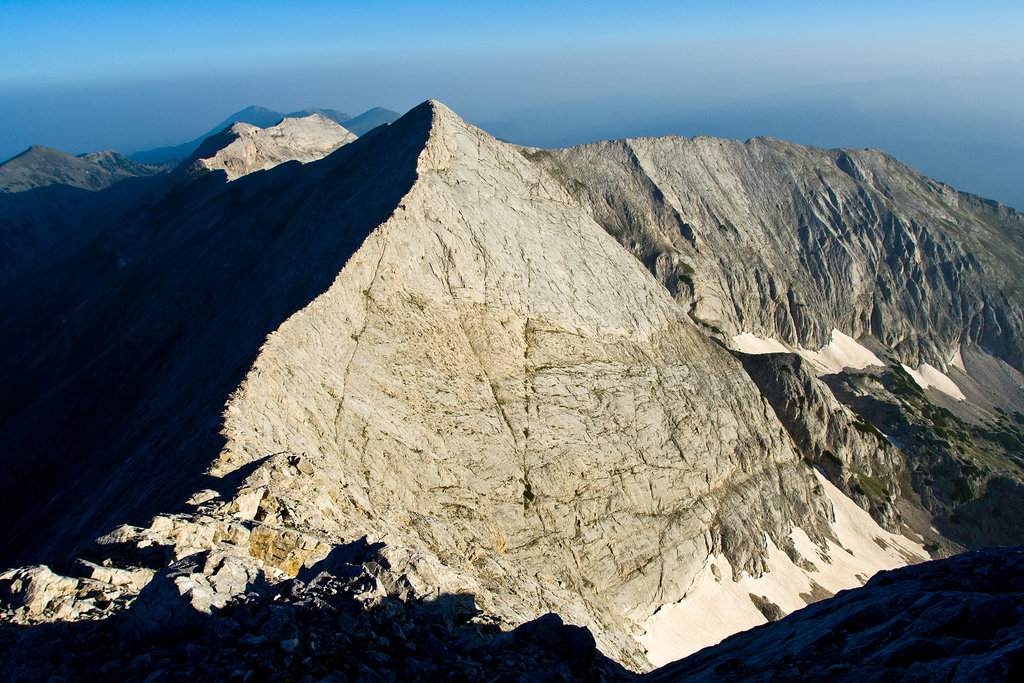 41.780278 N   23.395 E
Nearest Higher Neighbor
Kutelo 2 - 642 m SE
El: 2 907 m / Prom: 36 m
Summit Register
See all
Svetlomir Dimov
Zlatka Stoycheva
Check out a downloadable 3D model of Banski Suhodol area. A higher resolution model can be found in the PeakVisor mobile app.
Do you have photos of Banski Suhodol or know something about it? Please let us know!