124 m
Elevation
Elevation is the altitude of a place
above sea level.

Proportional Prominence 0 m
Location
43.25 N  25 E
The Balkan mountain range (Bulgarian and Serbian Cyrillic: Стара планина, Latin Serbian Stara planina, "Old Mountain"; Bulgarian pronunciation: [ˈstarɐ pɫɐniˈna]; Serbian pronunciation: [stâːraː planǐna]) is a mountain range in the eastern part of the Balkan Peninsula. The Balkan range runs 560 km from the Vrashka Chuka Peak on the border between Bulgaria and Serbia eastward through central Bulgaria to Cape Emine on the Black Sea. The highest peaks of the Balkan Mountains are in central Bulgaria. The highest peak is Botev at 2,376 m, which makes the mountain range the third highest in the country, after Rila and Pirin. The mountains are the source of the name of the Balkan Peninsula.

The mountain range forms the watershed between the Black Sea and Aegean Sea catchment areas, with the exception of an area in west, where it is crossed by the spectacular Iskar Gorge. The karst relief determines the large number of caves, including Magura, featuring the most important and extended European post-Palaeolithic cave painting, Ledenika, Saeva dupka, Bacho Kiro, etc. The most notable rock formation are the Belogradchik Rocks in the west.

There are several important protected areas: Central Balkan National Park, Vrachanski Balkan Nature Park, Bulgarka Nature Park and Sinite Kamani Nature Park, as well as a number of nature reserves. The Balkan Mountains are remarkable for their flora and fauna. Edelweiss grows there in the region of Kozyata stena. Some of the most striking landscapes are included in the Central Balkan National Park with steep cliffs, the highest waterfalls in the Balkan Peninsula and lush vegetation. There are a number of important nature reserves such as Chuprene, Kozyata stena and others. Most of Europe's large mammals inhabit the area including the brown bear, wolf, boar, chamois and deer. 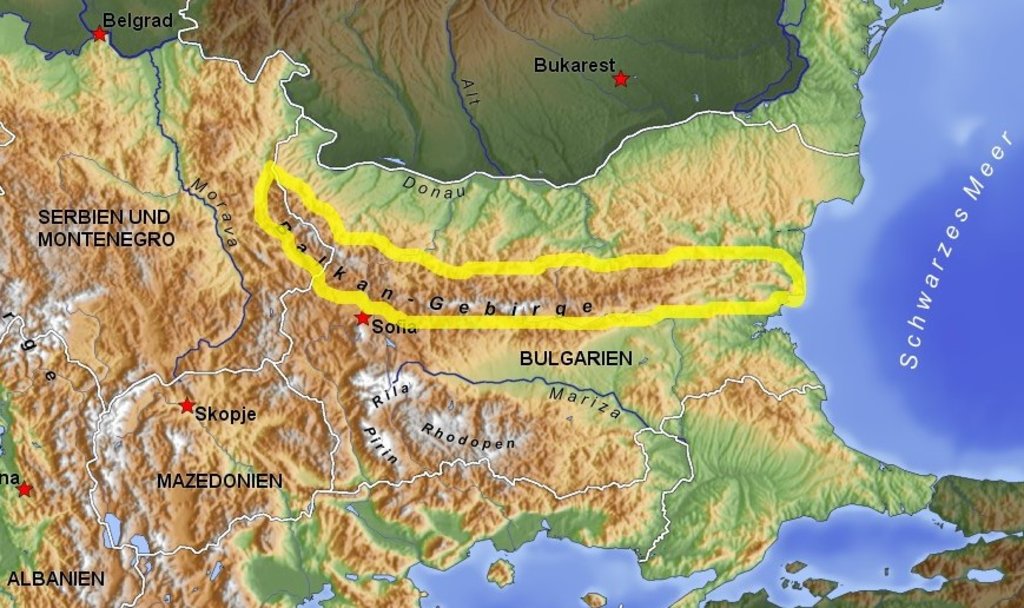 43.25 N   25.000278 E
Nearest Higher Neighbor
Unnamed Summit - 12.0 km SSW
El: 556 m / Prom: 116 m
Check out a downloadable 3D model of Balkan Mountains area. A higher resolution model can be found in the PeakVisor mobile app.
Do you have photos of Balkan Mountains or know something about it? Please let us know!