Yangmingshan National Park (陽明山國家公園) holds the reputation of being Taipei’s back garden, as its predominantly located in the Taipei City(臺北市) north district of Beitou (北投區) in Taiwan. 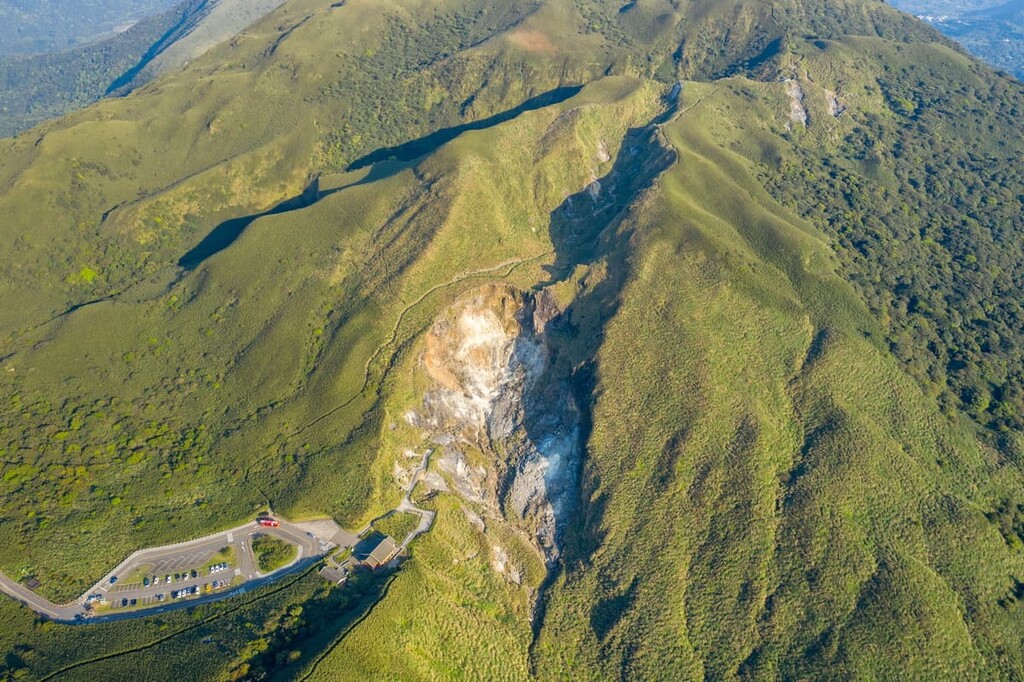 Yangmingshan National Park is one of the most beautiful national parks in Taiwan as it offers a variety of natural attractions, such as hot springs, fumaroles, waterfalls, sulphur deposits, grasslands, mountains, and a gorgeously soft pink bloom of cherry blossoms in early spring.

There are 97 named mountains in Yangmingshan National Park, the highest and most prominent of which is Mt. Qixing Main Peak (七星山) at 1,100m (3,609ft).

The park measures 11,338 hectares (28,000 acres) in area and is home to the tallest dormant volcano, Mount Qixing (七星山), or otherwise translated as Seven Star Mountain in English. Mount Qixing stands at 1,100 metres (3,609 ft) above sea level and it offers clear views of downtown Taipei.

The elevation of the park ranges from 200 metres (656 ft) to 1,118 metres (3,668 ft). While Yangmingshan National Park’s highest peak is the lowest elevation of all the national parks in Taiwan, the park is not lacking on its lovely landscapes for which it is so well known.

To the north of Yangmingshan National Park lie the North Coast and Guanyinshan National Scenic Area (北海岸及觀音山國家風景區) and the Qixing Mountain Natural Landscape (七星山自然文化景觀核心特別景觀區), while Yehliu Geopark (野柳地質公園) is located to the east of the park.

The Datun Volcano Group (大屯火山群), which consists of 20 volcanoes, is composed of volcanic and some sedimentary rock.

Due to the volcanic activity of Yangmingshan National Park, fumaroles and hot springs are abundant in the region. These are most present along the Xinzhuang Faultline that straddles between Beitou (北投區) and Jinshan (金山區).

At the northwestern base of the tallest volcano, Mount Qixing, lies Xiaoyoukeng (小油坑), a fumarole emitting clouds of sulphuric steam. Xiaoyoukeng also displays a landslide terrain from post-volcanic activity, and possesses an impressive collection of sulphur crystals. A putrid smell of rotten eggs is released from Xiaoyoukeng due to its high sulphur content.

Longfenggu Geological Area in the Beitou area of Yangmingshan National Park houses a steamy sight of bubbling and boiling natural hot springs which is as loud as its pungent sulphuric aroma.

Furthermore, the Shilin District of Lengshuikeng is a sought-after area in the park as it houses hot spring baths which allows visitors to dip their feet in the mineral enriched water.

From its former days as an active volcano, Yangmingshan National Park’s soil is highly acidic. Combined with the onset of northeast monsoons, which lowers the temperature of the park, this causes the vegetation to differ from areas sharing the same latitude.

Plants such as the Japanese Maple and bird-lime tree that grow at an altitude of 2000 metres (6,562 ft) above sea level are found in Yangmingshan National Park, with the elevation beginning at a meagre 200 metres (656 ft).

Yangmingshan National Park boasts a selection of 122 species of birds. The park is at its full capacity during the months of March to October as migratory birds spend these months inhabiting the warmer climate of the park.

There are over 165 species of butterflies, its presence most felt during the spring and summer months from May to August. The most customary types of butterflies featured in the park are tirumala, papilionidae, and nymphalidae.

During the summer months, there is a threat of dangerous snakes frequenting the forested areas of the park. While the park displays many posters informing and warning visitors of the potentiality of encountering venomous snakes, as long as one sticks to the marked trails, the probability of coming across one of these snakes is slim.

Taiwan bulrush and water chestnut are some aquatic plants that grow in marshes and reservoir ponds, while silver grass and arrow bamboo sprout in the grasslands at an elevation beginning at 600 metres (1,969 ft).

The Zhuzihu Calla Lily Fields is a prominent feature of the park as it displays a widespread white dusting of lilies throughout the expansive fields of 45 lily farms in the spring months.

Beautifully scenic, the imposing mountains add flair and intensity to the charming landscape. The well-known Zhuzihu Calla Lily Festival is held annually in March and April where visitors can observe the romantic atmosphere of blooming lilies, pick flowers, and attend a tour through the lily fields.

The Yangmingshan Flower Clock, one of the most striking attractions of the park, is a 6.7 metres (22 ft) diameter clock from which blooms seasonal flowers such as azaleas, cherries, and camellias.

During the Qing Dynasty, the area of Yangmingshan National Park was first known as Caoshan (草山), or otherwise Grass Mountain as its English transiliteration.

Caoshan was the name that locals gave to Datun Mountain, as the area was set on constant fire in an effort to ward off thieves wanting to steal the rich mineral deposits in the post-volcanic region.

During the era of Japanese occupation, Daitan National Park (大屯國立公園) was eastablished, which included the mountainous land of Mount Qixing, Mount Datun, and Mount Xiaoguanyin.

Caoshan was changed to Yangmingshan in 1950 by president Chiang Kai-shek (蔣介石) to pay respect to the Ming Dynasty scholar Wang Yangming. In 1963, the area was re-zoned to include Jinshan, and Yangmingshan National Park, as we know it, was established on 15 September 1985.

Yangmingshuwu (陽明書屋) is a historically significant building that is situated in the park. This was once the summer residence that had been personally selected by late President Chiang Kai-shek.

This two storey traditional Chinese building was built in 1969 and was initially known as Zhongxing Hotel as it housed foreign visitors, but it was renamed Yangmingshuwu in 1975.

Painted in green to represent nature, Yangmingshuwu is considered a fine fusion of nature and culture, and guided tours are offered inside the former residence of Chiang Kai-shek showing its immaculate interiors and art collection.

Perhaps one of the most popular trails of Yangmingshan National Park, Mount Qixing Trail measures 5.7 km (3.5 mi) from start to finish, and it takes roughly 3 hours and 15 minutes to complete. This trail is located in the Beitou District of Taipei City.

Fluffy swathes of silvergrass and warm clusters of red nanmu and green maple populate the mountain, and Formosan red-bellied tree squirrels can be spotted scurrying through the area.

The Menghuan Pond Trail is a circular trail that accommodates the most rare aquatic animals and plants which forms part of the ecological protected area. The pond is admired for its picturesque setting of being immersed in an endless layer of fog and mist. Another attractive feature of this trail is that it offers panoramic views overlooking Yangmingshan National Park along its pathways.

The Menghuan Pond sits at an elevation of 870 metres (2,854 ft), and considered to be quite a natural phenomenon given that no one is sure how it was formed. The rare Taiwan isoetes, an aquatic fern, grows in this pond, which is the lowest altitude that this extremely rare aquatic plant is found.

Birds that can be sighted along this trail are the loud and low melodic sounding black bulbul, the ‘five-coloured’ brown-browed barbet, and the lesser scimitar babbler that looks like a masked bandit with black markings around the eyes.

The Mount Datun Multi-Peaks Trail is famed for its beautiful setting, as it is here that one can encounter a flurry of butterflies in the spring and summer months, and enjoy a wispy display of silvergrass flowers in the autumn. Mount Datun is considered a perfect spot to stargaze on a clear night amidst the chorus of grass cicadas who inhabit this mountainous area.

Sightings of the Krauss spikemoss can be spotted on the mountain trail. Known for its unique prickly appearance, this is a type of fern that reproduces strobili on the tips of the leaves for purposes of dispersion. The flowering white narrow-petalled hydrangea blooms along this trail during the summer months.

Located in the valley of the Datun Mountain Range, Qingtiangang Trail is renowned for its picturesque landscape of its wide, open field of windswept grass, thus given the name ‘Sun Valley’ for its quaint gentle landscape.

Being a circular trail, the trail both begins and ends at Qingtaingang Lingtounie and one can walk the 2.4 km (1.5 mi) moderate trail in either direction.

Due to its friendly terrain, its slight elevation gain of 74 metres (243 ft), and its overall duration of only 50 minutes, this trail is a popular choice amongst visitors of all ages and abilities. In addition, this trail is favoured for the vast lush view of grasslands and the sight of the odd cow grazing on the land.

Juansi Waterfall Trail is another well liked trail in the park due to the moderately easy effort to complete. The stunning 20 metre (66 ft) Juansi Waterfall is located in a valley of a dense forest just 1km (0.6 mi) from the Jingshan Road Trailhead.

From the Juansi Waterfall, an observation deck lies 1.1 km (0.7) away, which offers flourishing views of the thick forest below. The trail is 2.2 km (1.4 mi) and takes 1 hour and 30 minutes to complete.

Populating this scenic trail with its green foliage is the green maple, which turns a robust crimson in the autumn months. Formosan begonias add a touch of pink, contrasting beautifully with the lush greenery of the trail. Swinhoe’s frog and Formosan red-bellied tree squirrels can be spotted along or just off the trail, while the melodic oriental skylark can be heard above in the trees.

A fan-favourite, Erziping Trail is sandwiched between Mount Datun Main Peak and Mount Erzi (二子山), and it is in this caldera valley that a diverse selection of natural resources is present.

As a result of its subtropical to temperate climate, a variety of plants populate this area. Forest trees, ferns, nectar-bearing plants, and aquatic plants are examples of the vegetation present in the Erziping region.

The Erziping Trail is 1.8 km (1.1 mi) in length and is a fairly undemanding walk as the elevation gain is a total of 25 metres (82 ft). This trail is the perfect choice for those interested in observing the flora and for butterfly and bird watching.

Taiwan green tree frogs can be spotted hopping about the ecological pool situated in Erziping, while the Indian Fritillary species of butterflies can be seen fluttering about this area.

Due to its close proximity to Taipei, there is a wide selection of accommodation to choose from that can match your budget.

At the higher end of the scale are the Landis Resort Yangmingshan and Hotel Royal Beitou. Landis Resort has a large outdoor swimming pool, an indoor hot spring pool, a fitness centre, a games room, and is situated near the Cuei Fong Circle Trail.

Hotel Royal Beitou, which has great reviews for its service and family friendly accommodation, sits nearby Beitou Hot Springs. A restaurant, fitness centre, spa and conference centre are the main features of this hotel.

Sitting on the budget end of the scale, but nonetheless still maintaining excellent standards of service, are the Hotel Leisure Taipei and On My Way Taipei Hostel.

Hotel Leisure Taipei has received numerous reviews for its convenient location in Beitou as it opposite the Fuxinggang MTR Station, and has a restaurant on site. On My Way Taipei Hostel holds outstanding reviews for its friendly, multilingual staff. It is located close to Beitou MRT Station and the Beitou Night Market.

Coming from the major cities of Kaohsiung, Tainan, Taichung, Hsinchu, and Hualien, take the train or the High Speed Rail (HSR) to Taipei Main Station.

Visitors have many options of transport to get from Taipei to Yangmingshan National Park.

One option is to take the Red MRT line from Taipei Main Station to Jiantan MRT Station. From there, take either the R5 or 260 shuttle bus to Yangmingshan National Park entrance.

Yangmingshan National Park’s 108 shuttle bus transports one in a loop around the park making stops at the main attractions along the way. 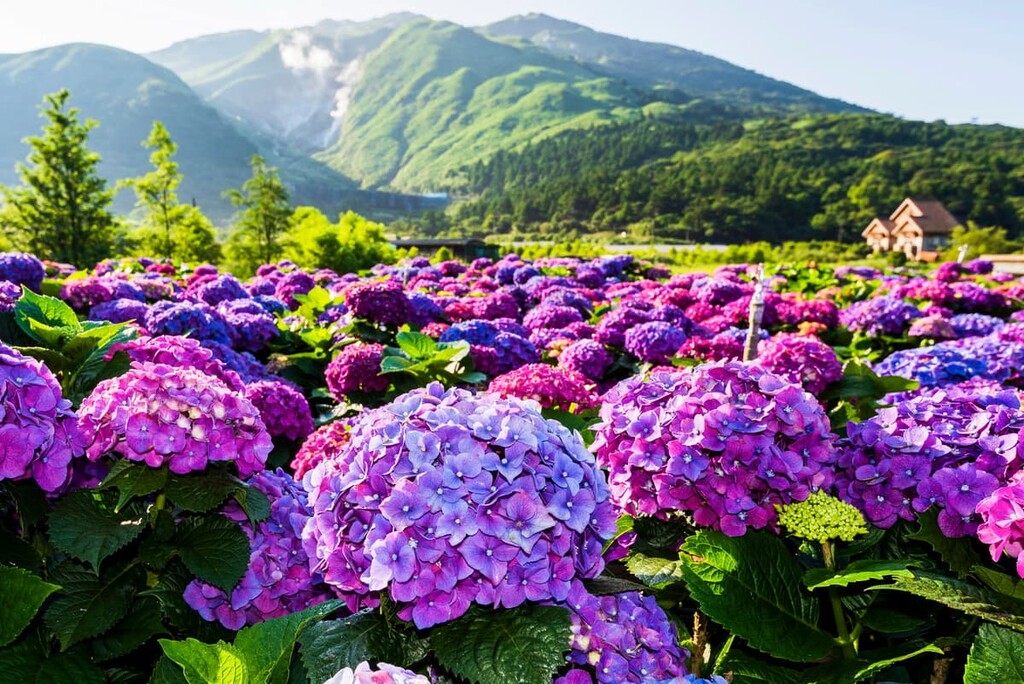 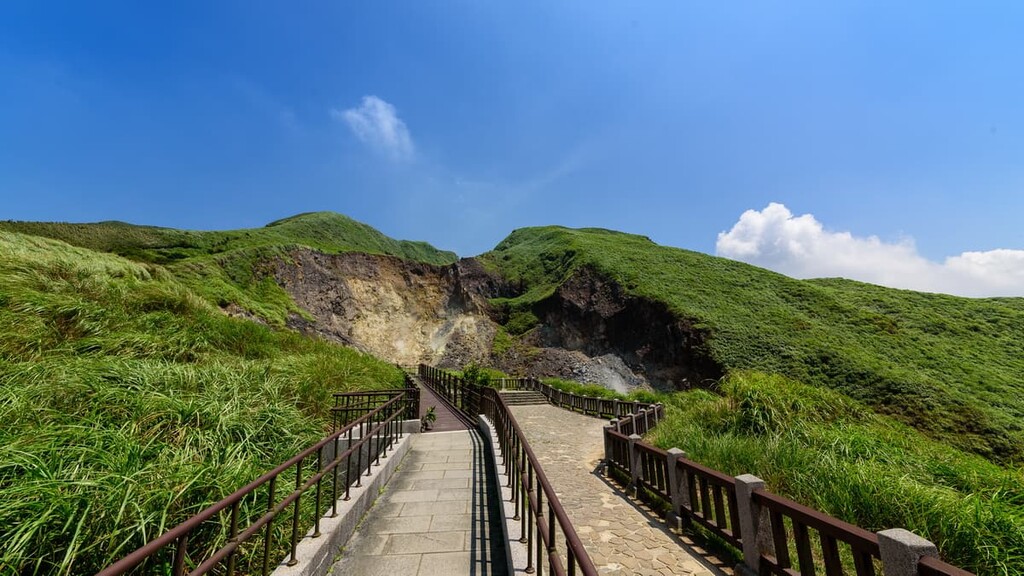 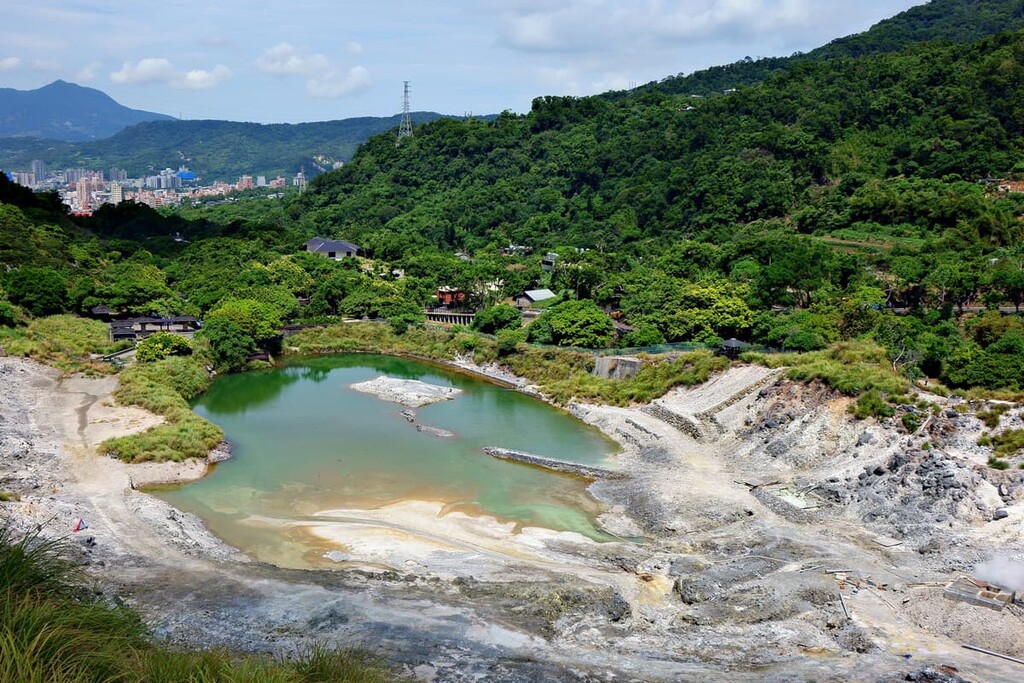 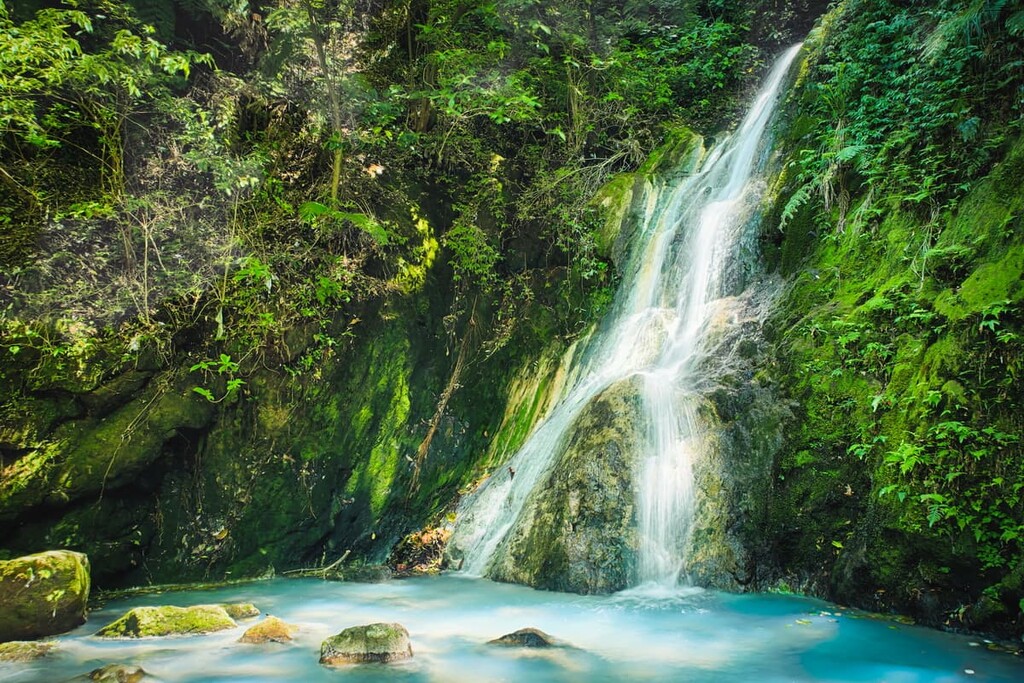 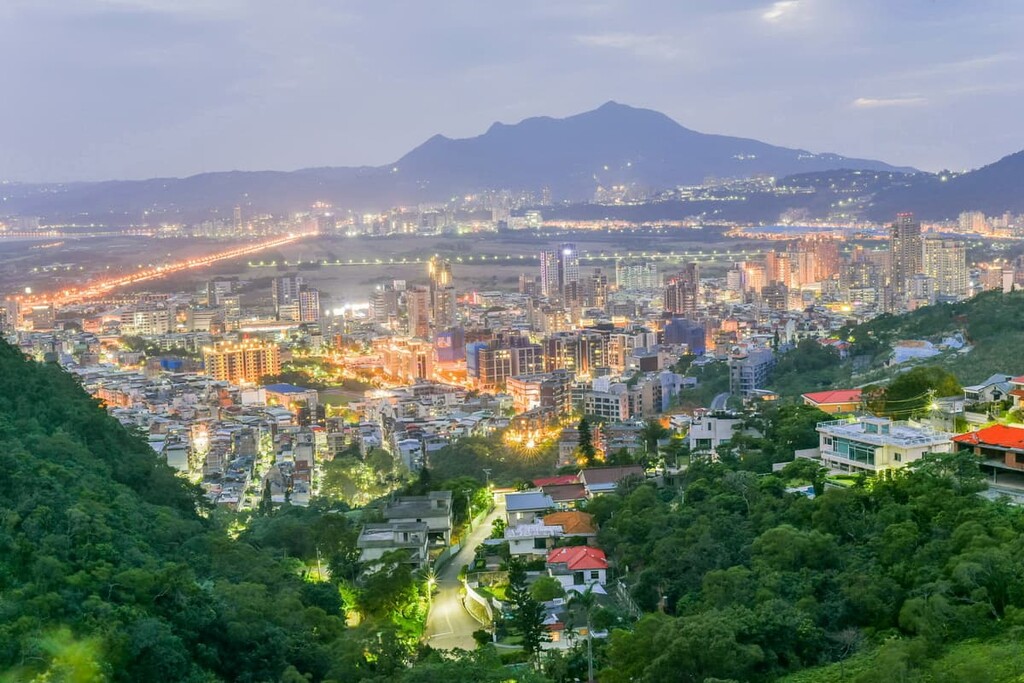 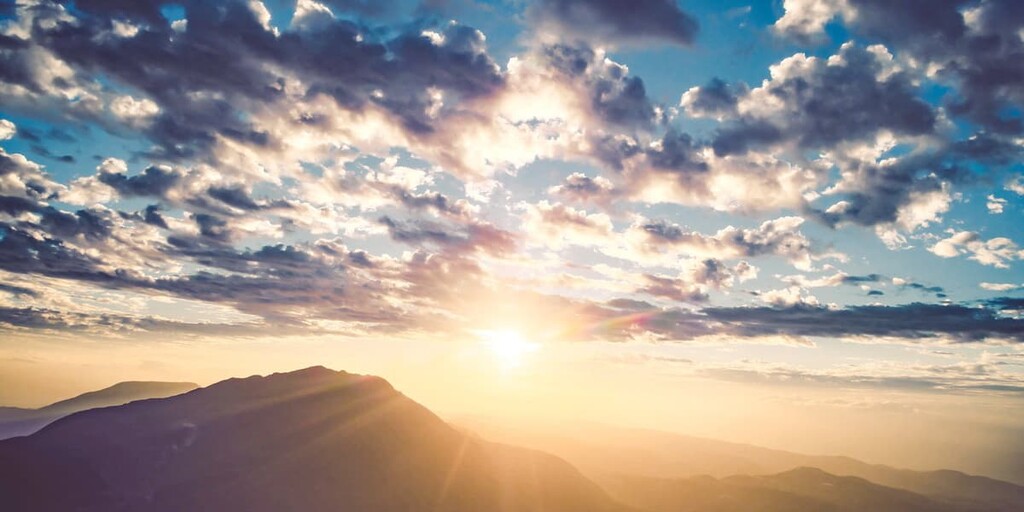 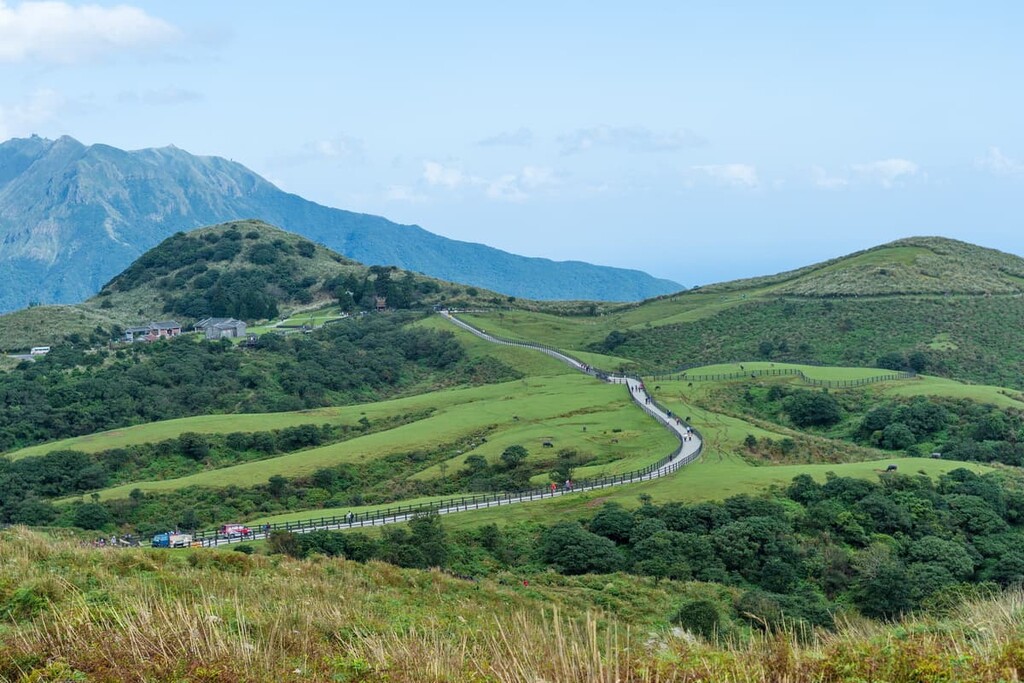