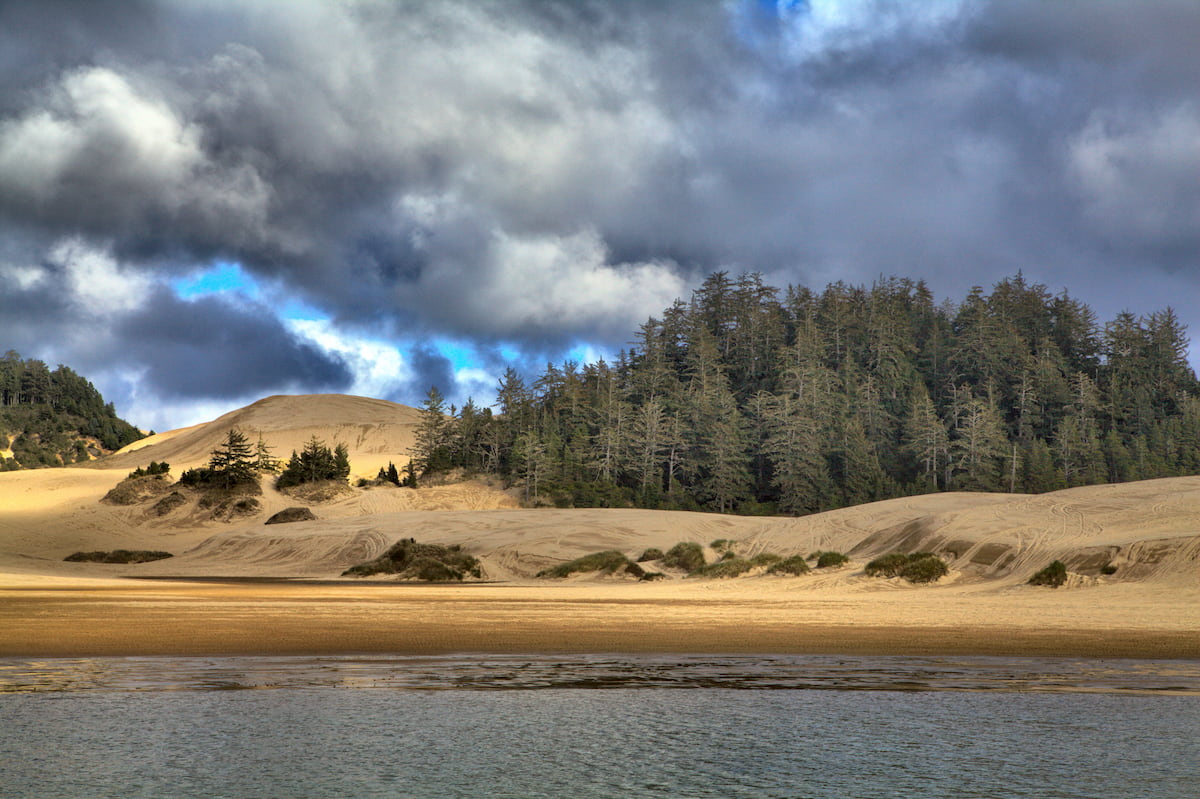 These dunes stretch nearly 40 miles along the coast, making them the largest coastal dunes in North America. Part of the Oregon Dunes are estimated to be over 100,000 years old, caused by coastal wind and rain erosion. The youngest portion of the dunes is estimated to have been created over 7,000 years ago. As a whole, the dunes have been formed by the persistence of water and wind. The current formation of the dune is largely due to the shift of the summer winds. During the summer months, wind blows from the north and northwest at around 15 miles per hour. While much of the winter months remain less windy, winter storms can result in wind speed of up to 100 miles per hour from the south and southwest. It is these strong winds that reshape the dunes’ structure. Additional sand is added to the dunes as the ocean stirs up the seafloor and deposits it on the shores. The strong winds then sweep this new sand and add it to the dunes.

Throughout the Oregon Dunes are marshy sections of land. Hidden standing water, often several feet deep, results in quicksand pits. The Barrage Lakes lie within the dunes and are the result of old streams being dammed up when the dunes were developing.

Native plants such as cedar, blue grass, shore pine, and spruce, help the dunes thrive as an ecosystem. The dunes are also home to many species of birds, along with the Western Snowy Plover. The plover uses this region as a nesting sight, vital to this endangered species repopulating.

The Oregon Dunes Loop Trail is one of the most popular hikes in the entire recreation area. The 4-mile loop has just 125 feet of elevation gain and takes hikers through the heart of the dunes. It is likely that this hike will be unlike anything you’ve done before with the towering dunes mixed with the tall trees and crashing waves of the Pacific Ocean.

The John Dellenback Dunes Trail is 2.7 miles one way and rated as easy. The trail starts at the Eel Creek Campground where you pass through what is now an overgrown dune. As the trees begin to thin, you will arrive at dunes themselves. Be careful where you step as much of the land is loosely packed. Follow the signs (note that some may be covered by the shifting dunes) until you reach the beach. Climb up to high points within the dunes to take in the expansive and diverse landscape below.

As part of the Oregon Dunes National Recreation Area, this loop trail takes hikers through the lush forest just east of the dunes. The trail totals 3.5 miles roundtrip with the turnaround point being at Siltcoos Lake. A relaxing trail juxtaposition to the towering dunes that lie just on the other side of the highway.

This 6-mile loop trail takes hikers through all regions of the recreation area. Starting in the lush forest, the trail winds through the native trees before entering the open dunes, with tree patches spaced throughout. The trail heads westward to the coastline, along the ocean, before returning to the forested starting point.

Located in the heart of the Oregon Dunes lies the small city of Reedsport. With a population of under 5,000 this small town is full of local shops and cafes. The town has seen a rise in tourism with the popularity of the dunes with many of the businesses in town relating to exploring the dunes. Many catering to taking all-terrain vehicles through the sand dunes.

Located 35 minutes south of the Oregon Dunes National Recreation Area lies Coos Bay. A small coastal town, Coos Bay has a population of approximately 16,000 with the surrounding region totaling 32,000. This quaint coastal town is surrounded by protected nature including the Bastendorf Beach County Park, Yoakam Point State Park, and many more. The coastline surrounding the bay offers an abundance of space for aquatic based activities. 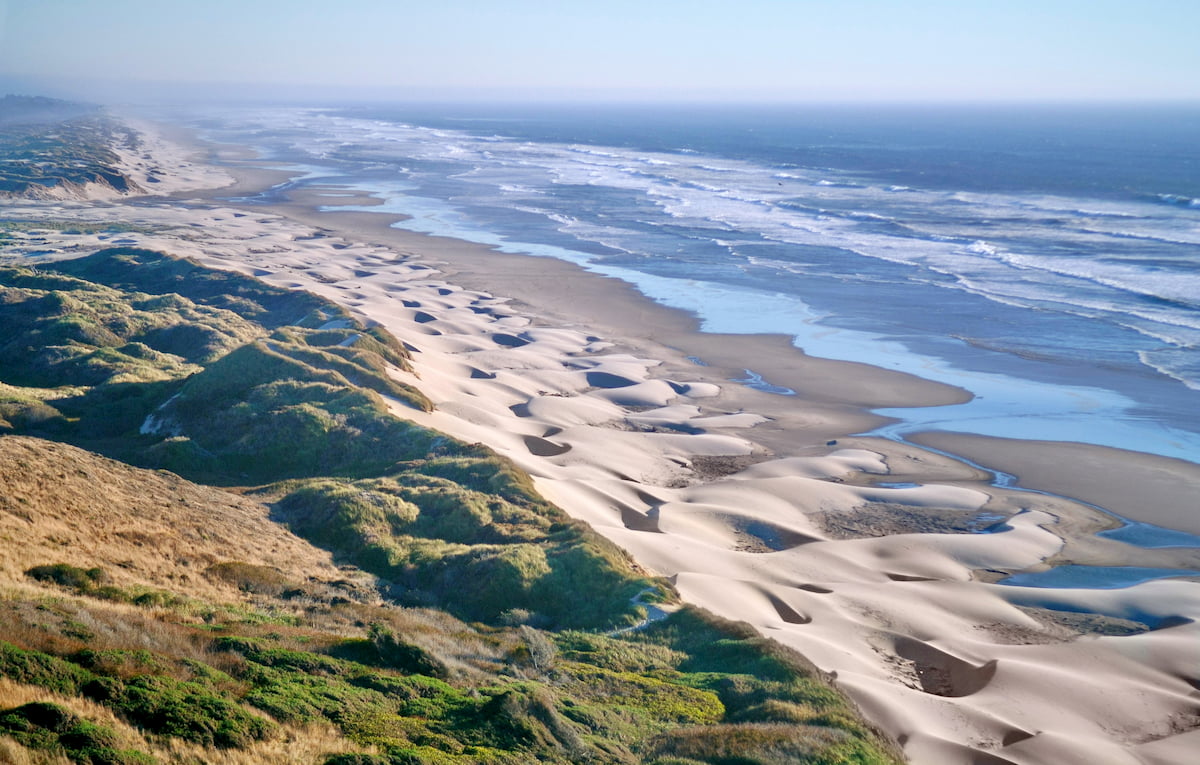 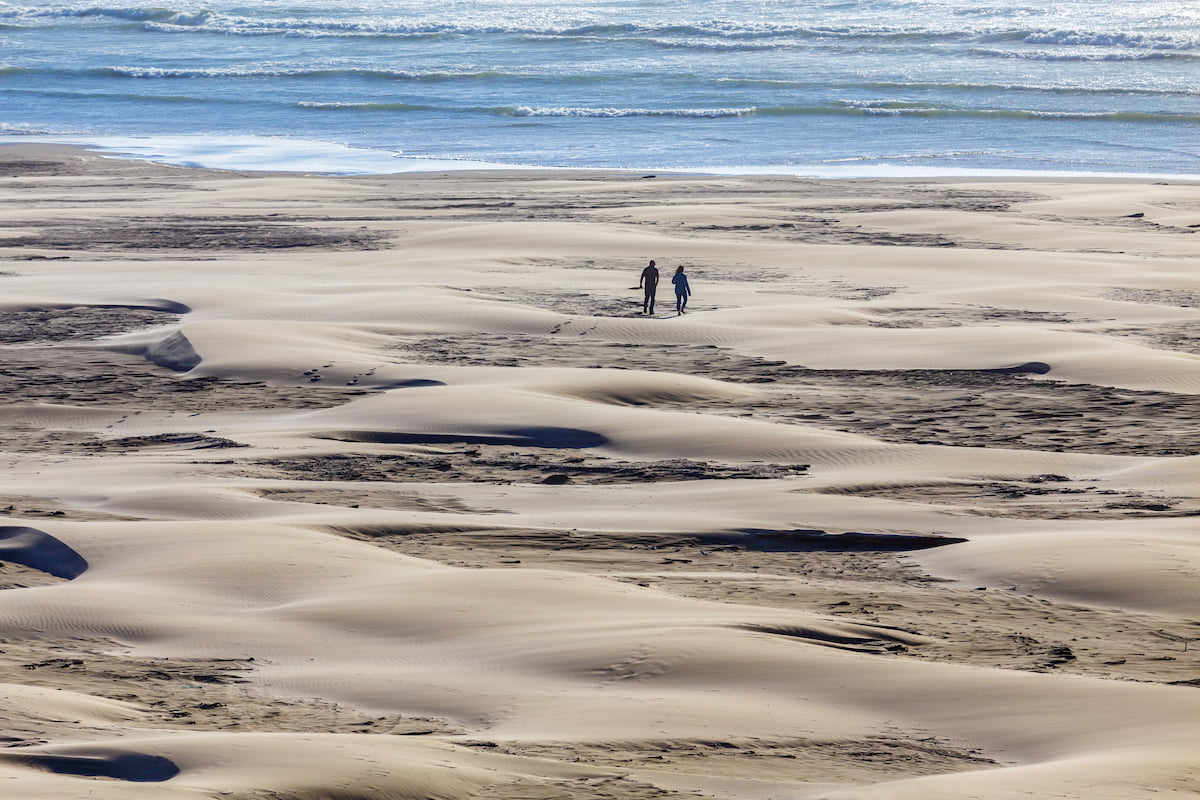 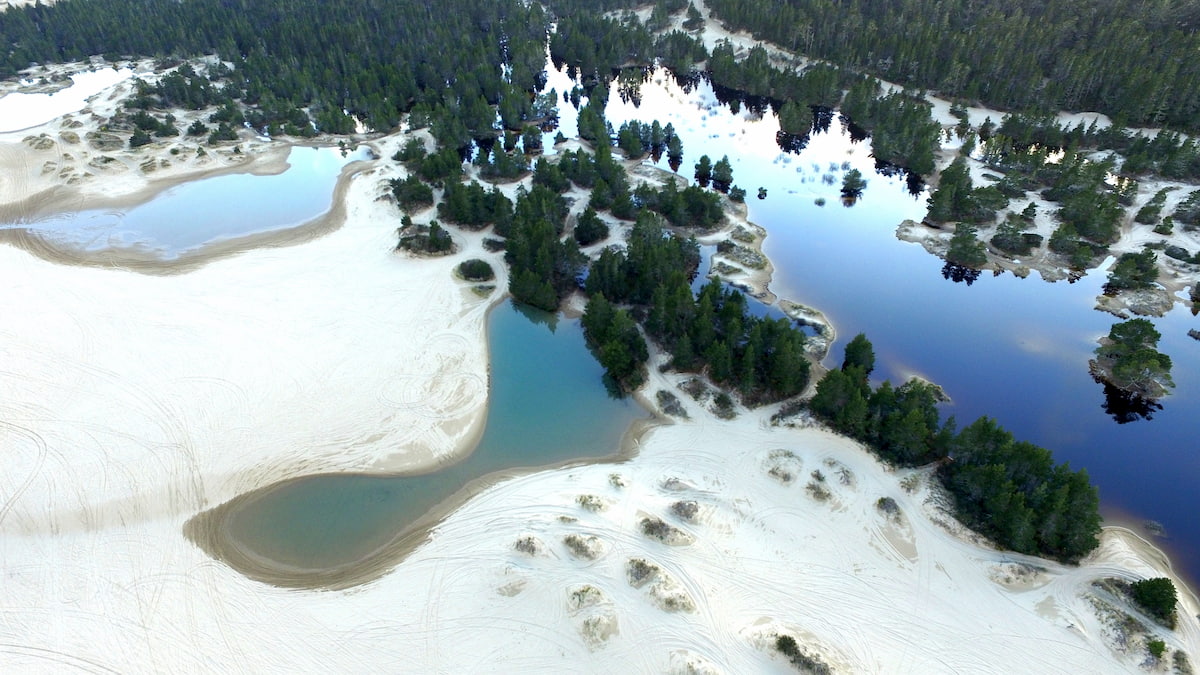 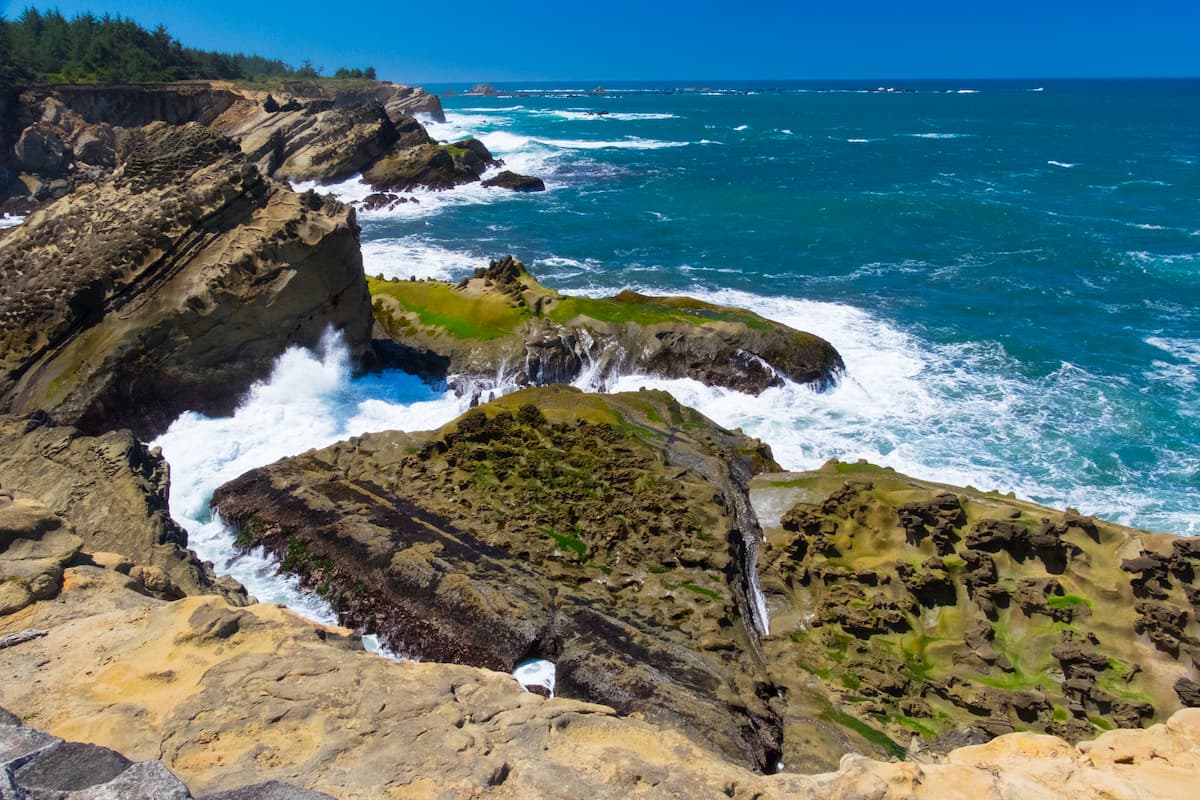 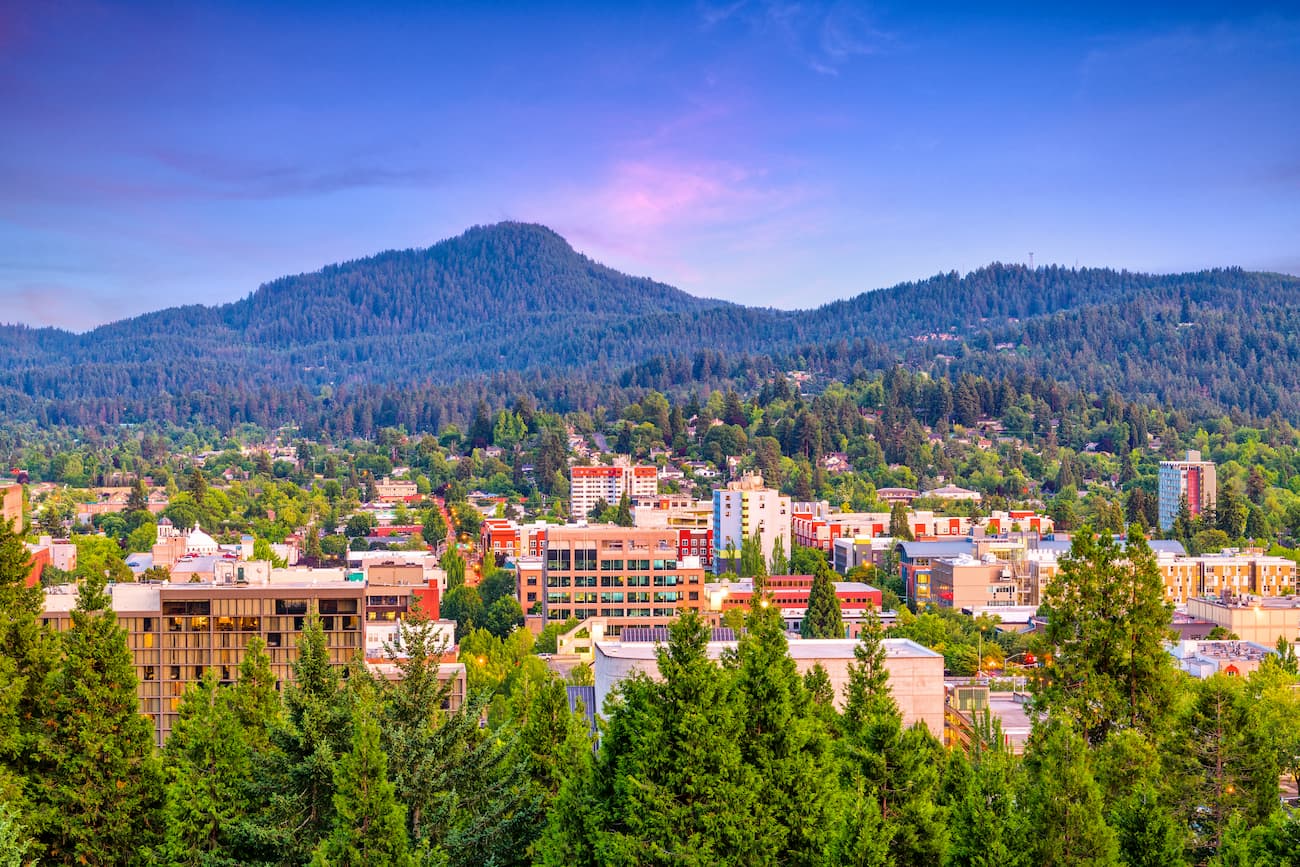