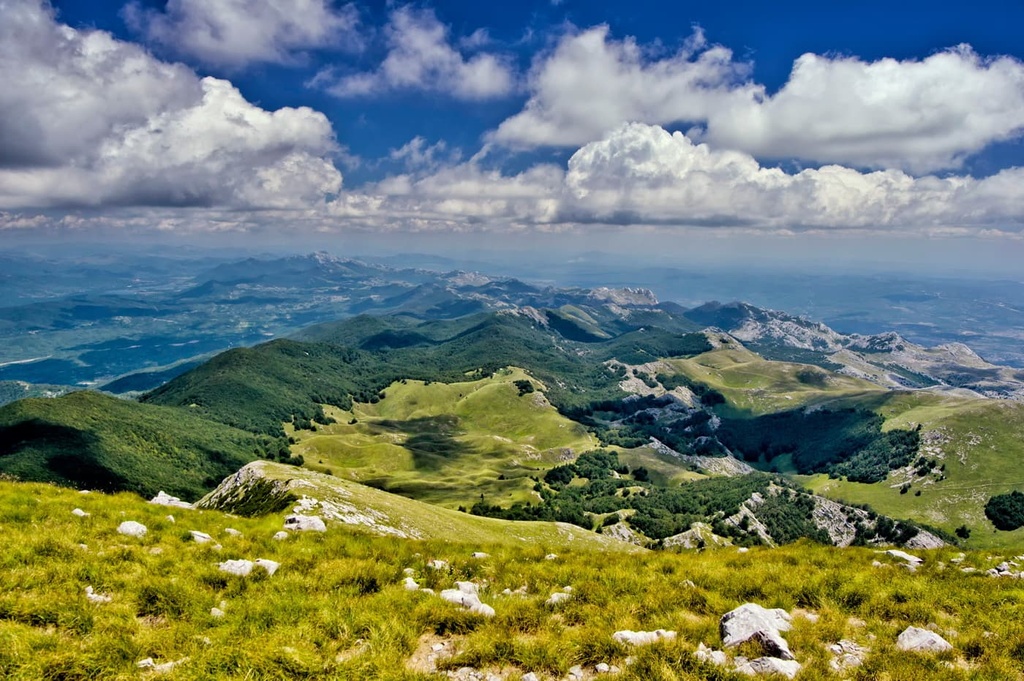 Paklenica National Park (Nacionalni park Paklenica) is located in northern Dalmatia, a coastal region of Croatia. It is situated about 47 km (29 mi) to the north of Zadar, and the closest town to the park is Starigrad, which lies on the coast. The park is located in Lika-Senj and Zadar counties, and it covers an area of 95 sq. km (59 sq. mi).

The area of Velika and Mala Paklenica is unquestionably beautiful thanks to its natural features, majestic forests, and incredible geomorphological structures. The park itself was first protected back in 1949, a testament to the importance of this area.

Paklenica National Park includes the highest peaks of Velebit, which is a major mountain range in Croatia. The highest peak in the range, Vaganski Vrh (1,758 m/ 5,767 ft), is located in the national park, alongside other notable peaks like Sveto Brdo (1,751 m/ 5,744 ft). The name Paklenica probably derives from the word for black pine sap, paklina. Black pine sap has long been used in the region for medicinal purposes and to coat the exteriors of wooden boats.

In fact, the region that is now located within Paklenica National Park is so ecologically important that it is part of a larger area of protected terrain that also includes Velebit Nature Park and Northern Velebit National Park. Additionally, this area is also protected as a Natura 2000 Site, a UNESCO Biosphere Reserve, and a UNESCO World Heritage Site.

The park has two entrances as well as two sections. The first entrance takes visitors into Velika Paklenica, or the gorge of the Big Paklenica River. Meanwhile, entrance number two brings you into the canyon of the Mala Paklenica, or Small Paklenica.

Paklenica National Park is a popular place for mountaineering, alpinism, and rock climbing, with a blend of history and the seaside. The park is home to a number of fun hikes and many excellent views.

Some of the main sites in Paklenica National Park include:

Velika Paklenica Canyon is a breathtaking canyon in Croatia. It's 14 km (8.5 mi) long, 500 m (1,640 ft) wide at its narrowest part near the underground tunnels, and has stunning views. The canyon is over 700 m (2,296 ft) in length and is almost impossible to cross. The most incredible part of the canyon is the steep section near the scenic Anicha Creek.

Paklenica National Park is also home to the largest mountain range in the country—Velebit. The highest area of the park is found along a narrow ridge in Velebit, which includes Vaganski Vrh (1,758 m/ 5,767 ft).

In the park, you can also see quite a few areas of typical karst topography. Karst is a type of limestone terrain with many caves, surface irregularities, and underground drainage systems. It forms as a result of the dissolution of limestone and other similar rocks in water.

The park’s caves are of particular interest to researchers. For example, the cave called Zub Buljme is a valuable palaeontological site as researchers once uncovered 30,000-year-old skulls of the cave bear, Ursus spelaeus, in this area.

Paklenica National Park is also home to many permanent and seasonal springs. Some of the most famous springs in the area include Stražbenica, Kontinovo Vrilo, and Ivine Vodice.

Finally, some of the major peaks of Paklenica National Park are:

Paklenica National Park is 95 sq. km (59 sq. mi) in area, and it is home to seven different ecological zones that consist of a wide range of terrain. The range of elevations that are found in the park has helped contribute to the ecological diversity within this small area.

In fact, more than 1,000 plant species and subspecies have been recorded in the park to date. Approximately 79 of these species are endemic to the area, which is a testament to the park’s importance as a hub for biodiversity.

The mountainous region of Paklenica, together with its seaside and rocky cliffs and diverse natural conditions, provides a great environment for many different types of wildlife.

Birds are the most abundant vertebrate in the park as researchers have recorded more than 260 species in this area alone. At least 24 bird species are known to nest in the park, particularly around the cliffs of Velika Paklenica and Mala Paklenica.

Among the most notable bird species in the park, we have golden eagles, peregrine falcons, short-toed eagles, goshawks, Eurasian tawny owls, scops owls, and eagle owls.

Furthermore, 31 amphibian and reptile species have been recorded in the area, of which 11 are snake species. The most common snakes that you’ll find in the park are the non-venomous Balkan whip snake (Hierophus gemonensis), leopard snake (Zamenis situla), and Aesculapian snake (Zamenis longissimilis).

Within the park, researchers estimate that there are 53 species of mammals. These include roe deer, red deer, chamois, wild boars, wolves, and lynxes. Other notable mammals that live in the park include foxes, wild cats, beech martens, least weasels, and brown bears.

Humans have been living in what is now called South Velebit for thousands of years. By the end of the last glacial maximum, most of the residents of the region were primarily hunter-gatherers.

Some of the earliest records of human habitation in the region are artifacts from the Mesolithic period that were found in Vaganačka Cave. The earliest agricultural communities in the area arrived 8,000 years ago, bringing with them domesticated cattle, sheep, and wheat.

Around 2,000 years ago, during the Bronze Age, humans started building walls and fortifications in the region. These people called themselves the Illyrians, and they mostly sustained themselves by raising cattle and by growing crops. They also looted and pirated ships in the nearby Adriatic Sea.

Eventually, the Romans conquered the area. The region was known as the Roman province of Dalmatia and it came into existence around the first century BCE. One of the most notable towns from this period was Argyruntum, which is now a well-known archaeological site. Argyruntum eventually became an important trading center, and it is now known as Starigrad.

Life in Argyruntum eventually came to a standstill in the early fourth century. The peace that had lasted for so long in the region was disrupted by invading tribes like the Goths and Slavs, which led to the total decline of the Roman state in the region.

At the time, Emperor Justinian tried to bring back the Adriatic Coast and protect it with a series of fortifications. But nothing could help stop the influx of other tribes, and the Slavs eventually settled in the region permanently.

Since the Middle Ages, a Slavic tribe called the Croats has lived in this area. The earliest buildings from Croatian settlement of the region include places like St. George (Sv. Juraj) chapel in Rovanjska and the chapel of St. Peter (Sv. Petar) in Starigrad, both of which were built in the ninth to the tenth centuries.

For over two centuries, humans completely abandoned the area at the foot of Velebit. This abandonment happened due to an extended period of fighting and war with the Ottomans. During this time, the population of the region fled and no one settled in the area in their place.

However, when the fighting stopped, people began to return to the region. The current culture of the Velebit region as we know it today dates back to this period.

Nowadays, the region is home to a number of unique landmarks, including mirila. These mirila are religious symbols and stone monuments that were erected to honor deceased members of the local community.

According to local customs, mirila are physical representations of the memories of people who died in the mountains and had to be carried all the way back to the village church. These symbols consist of a headstone and a footstone that are separated by paving stones. Each of these mirila was measured to be the exact length of the deceased and they eventually became symbols of worship for local residents.

These cultural and natural wonders are why Paklenica was proclaimed a national park of Croatia in 1949. Velebit Mountain was declared a UNESCO Biosphere Reserve in 1977, too. Furthermore, the beech forests in Paklenica National Park and the Northern Velebit National Park were designated by UNESCO as a World Heritage Site in 2017.

The trek to Manita Peć cave is a simple and short hike that you can extend with a visit to Velika Paklenica Canyon. The trail is well maintained, and the cave offers some shade from the sun and heat during the summer months.

The trail itself is relatively straightforward as it takes you from the park entrance to the peak of Crni Vrh and the meadows of both Grabove Doline and Lekina Njiva. This hike generally takes up to 6 hours for visitors to complete. If you want to extend your hike, you can also visit Mala Paklenica Canyon on your way back to the trailhead.

Vaganski Vrh (1,758 m/ 5,767 ft) is the highest peak of both Velebit and Paklenica National Park. You can reach the peak from the national park entrance via the mountain hut Struge and Marasovac. This is a relatively difficult trail because it requires an elevation gain of around 1,000 m (3,280 ft).

The hike itself can be made into a loop trail that goes from the hut to the peak and to the Velika Paklenica Canyon. If you hike this route as a loop, it takes most people a whole day to complete. The trail takes you through harsh karst relief and should only be done if the weather is not too sunny.

These trails lead you through the park on a short walk that showcases the region’s history and natural features. The Paklarić Trail also boasts a view of the Drava River.

Looking for a place to stay near Paklenica National Park? Here are some of the best cities to check out during your next trip to the area.

Starigrad is a small town in Croatia. It is located by the Adriatic Sea and has a population of about 2,000 people. Starigrad has been inhabited since ancient times when it was referred to by its Roman name, Argyruntum.

Nowadays, Starigrad is known as a family vacation town since it lies on the coast of the Adriatic Sea. One can find economy apartments and numerous campsites in the town. Starigrad is also fairly easy to get to by either sea or road from other major communities in the area.

Zadar is a city in Croatia. It is the largest city in the country by area, and it has a population of around 100,000 people. Zadar is a beautiful city with many attractions to offer for visitors. In particular, it boasts an old town with cobblestone streets and incredible architecture, as well as some amazing nearby beaches and islands.

Additionally, Zadar is known for its rich history, which dates back to ancient times. The Romans formally founded the city as a municipium in the first century BCE. It was later ruled by the Venetians, Austrians, Hungarians, French, and Italians before being annexed by Yugoslavia.

Split is a city in Croatia. It is the second-biggest city in the country by population, and it lies on the Adriatic Sea. One can reach this beautiful city via road, rail, air, and water. Visitors can enjoy all kinds of both luxurious and budget-friendly accommodations while in Split.

Croatia as a whole is known for its rich history and culture, both of which are highly evident in Split. The most notable site in Split is Diocletian’s Palace, a UNESCO World Heritage Site. Diocletian was a Roman emperor who decided to spend his retirement in Split. As a result, he built his palace by the sea near the city during the fourth century CE. 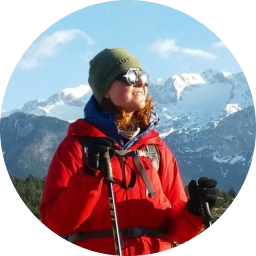 Jasmina Ferhatović
from Visoko, Bosnia and Herzegovina
Biography
I am a third-generation hiker and outdoor lover, with a Mountain Rescue Professional and scuba diving diploma under my belt. I enjoy discovering the unique way of life, natural and cultural heritage of the Balkans. If I'm not somewhere camping or running a river, you can find me playing with my dog. 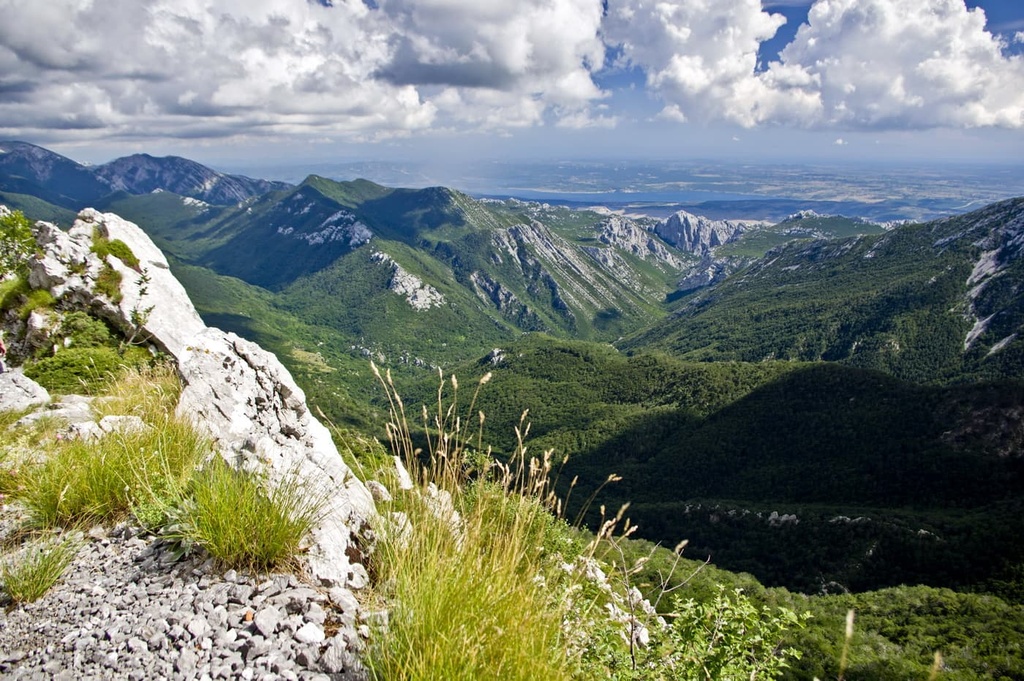 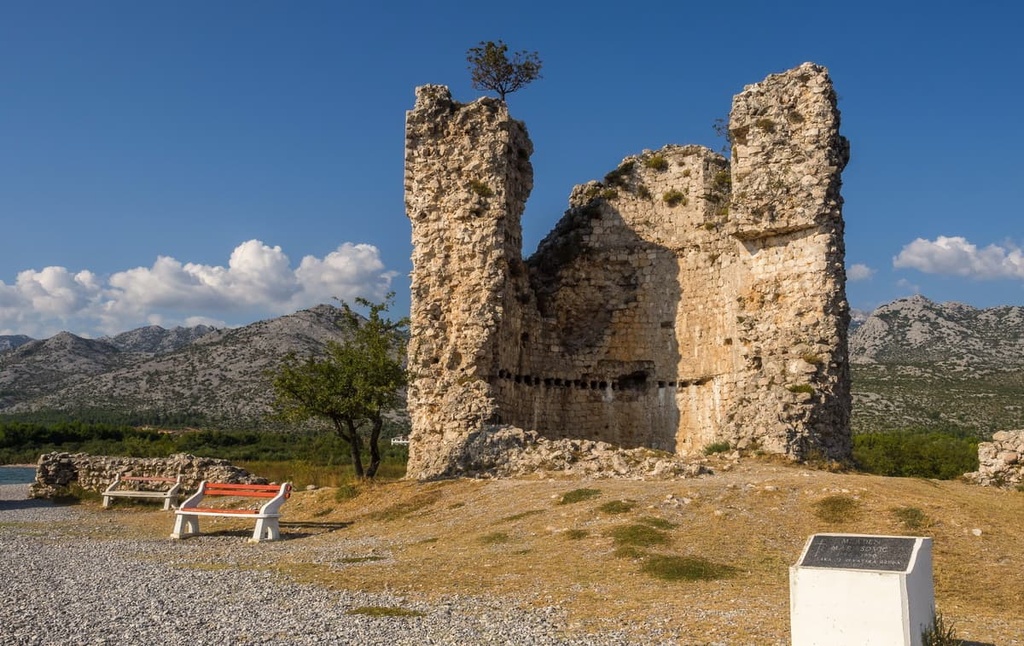 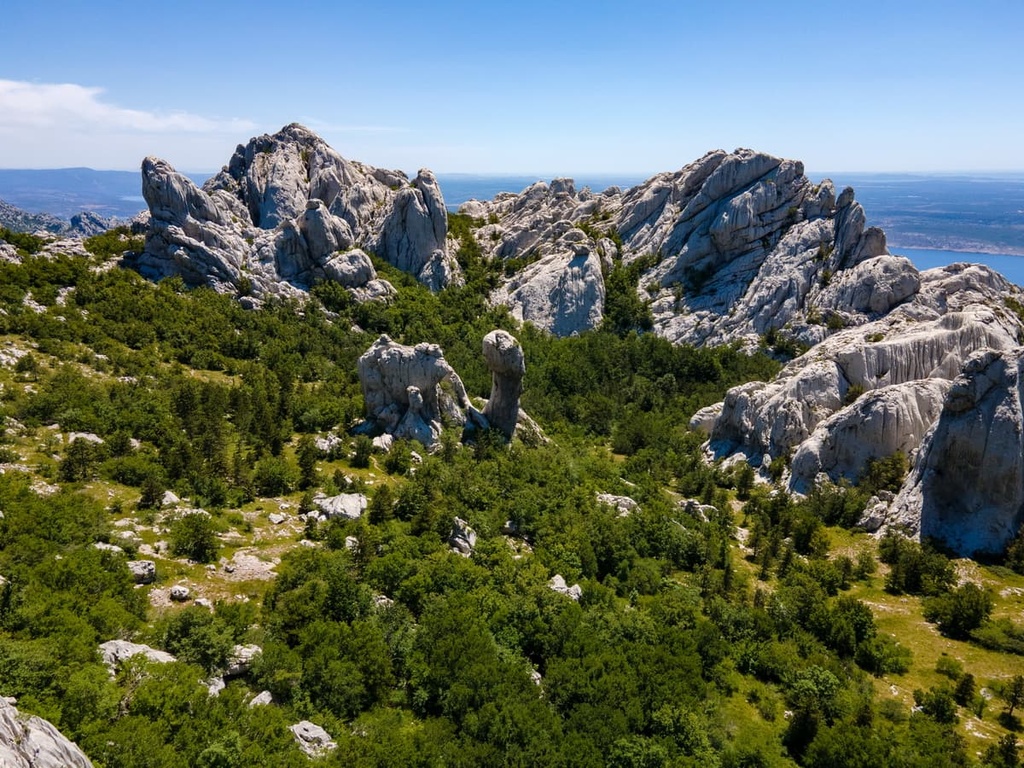 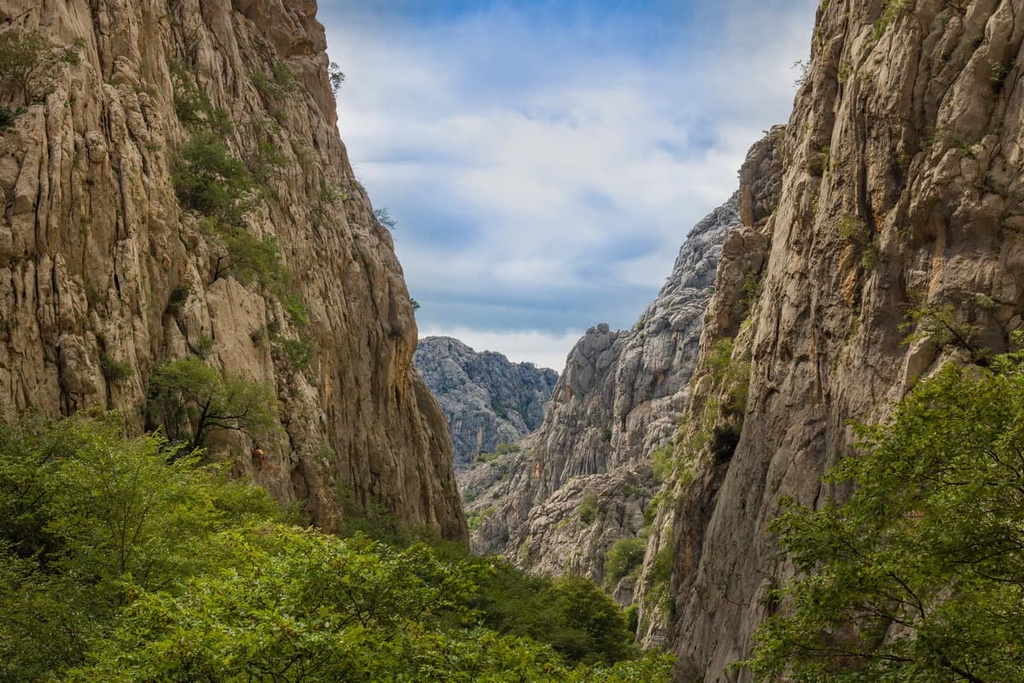 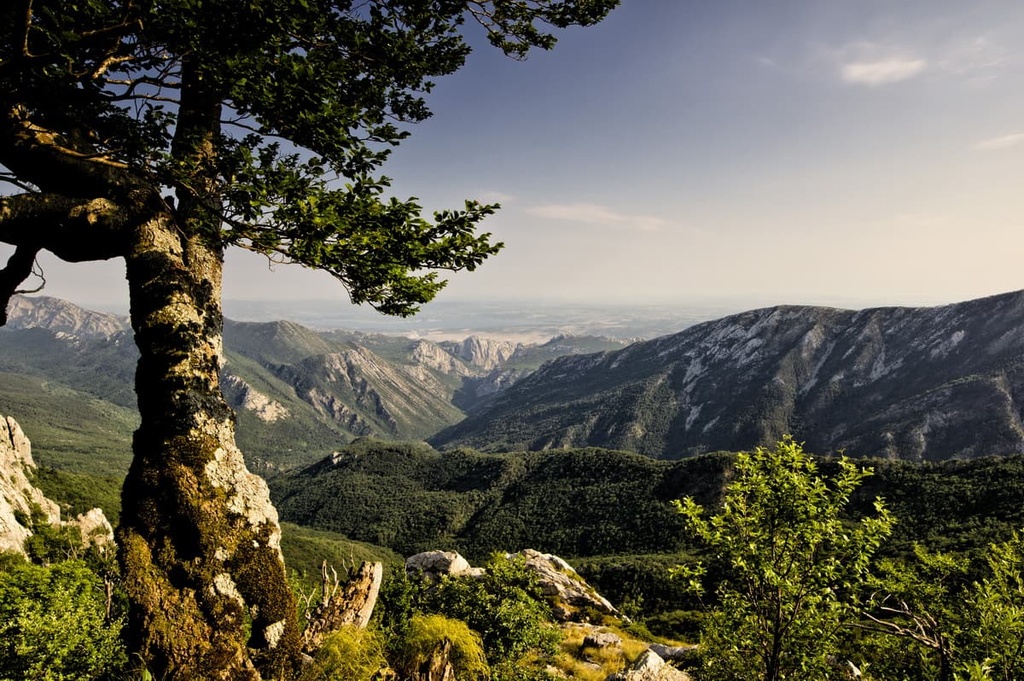 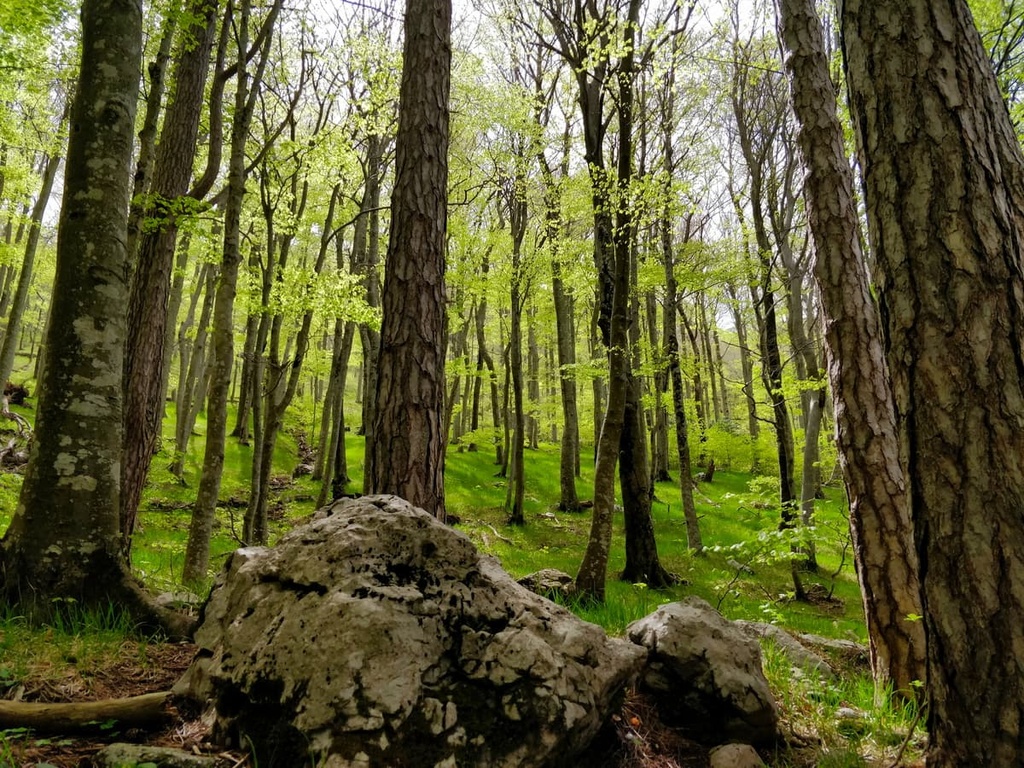 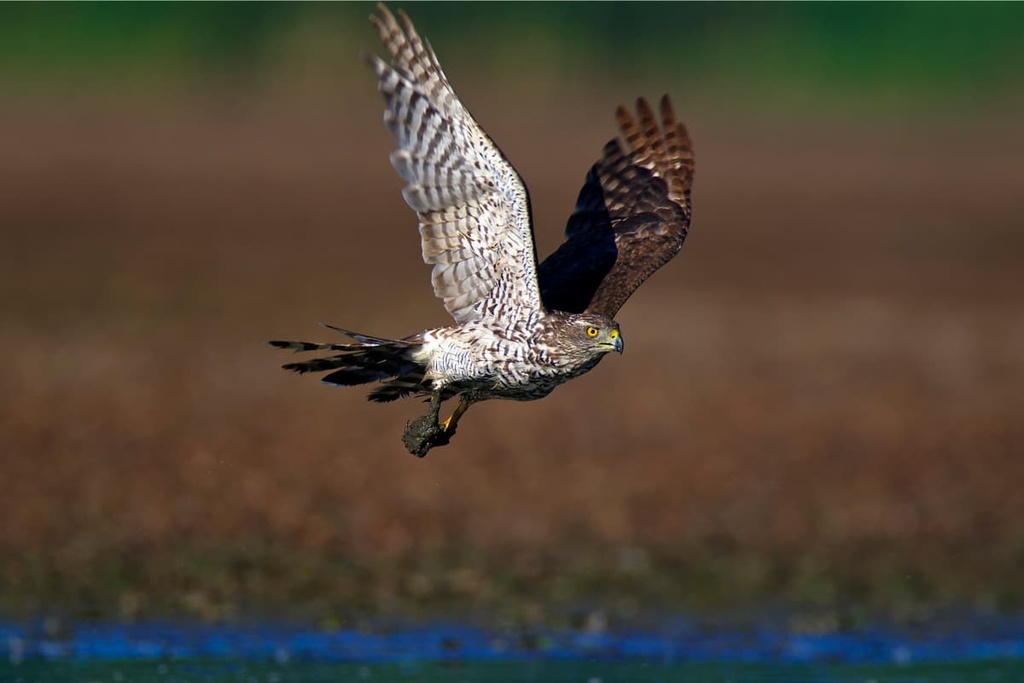