Mount Kaputar National Park is a protected area surrounding a former active volcano that’s located in the northeastern part of New South Wales in Australia. The park is situated roughly 565 km (351 mi) to the north of Sydney, and its landscapes have been carved out by millions of years of erosion. The terraces, rock formations, and peaks in the park are part of the Nandewar Range. There are 29 named mountains in Mount Kaputar National Park, the highest and most prominent of which is Mount Kaputar (1,509 m/4,950 ft). 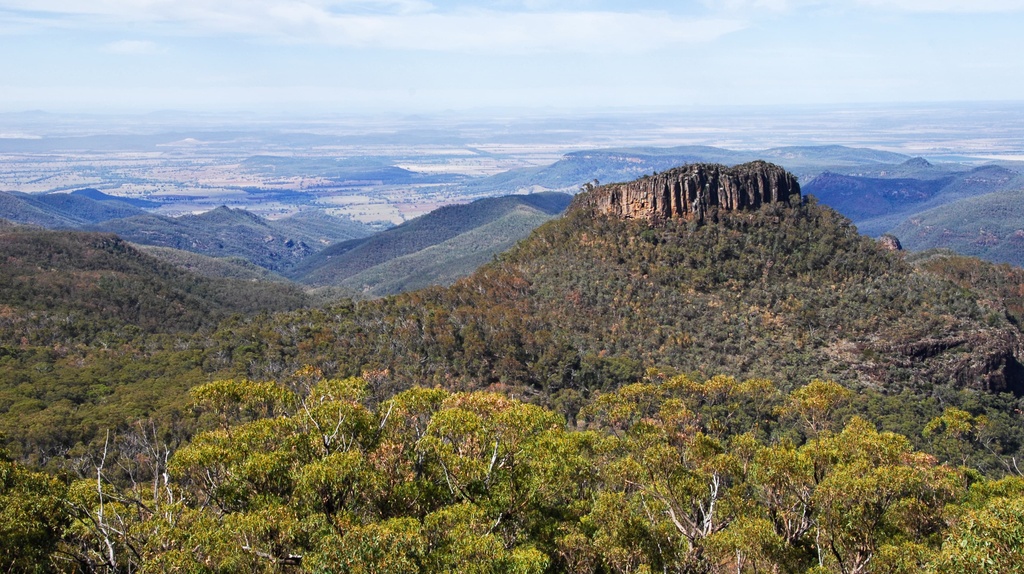 Mount Kaputar National Park covers an area of around 36,800 hectares (90,934 acres) in northeast New South Wales, Australia. The landscape in the national park is over 20 million years in the making, as extensive erosion has carved out a dramatic landscape of lava terraces, volcanic plugs, and rock formations in the region over the course of millennia.

The peaks in the park are part of the Nandewar Range, which covers the Northern Tablelands region of the Great Dividing Range.

The central feature of the park and its highest mountain is Mount Kaputar. This landmark rises to 1,509 m (4,950 ft) in elevation and receives a dusting of snow in the middle of winter. The incredible vantage point from the summit offers views across almost one-tenth of the total land area of New South Wales.

Mount Kaputar National Park is a rugged wilderness area that was formed around 20 million years ago as a result of several volcanic eruptions. Since then, millions of years of erosion have carved out the peaks and rock formations that make up the Nandewar Range, which dominates the park.

The remnants of these volcanoes that we see today are much smaller than the original Nandewar volcano that existed 20 million years ago. Over this time, layers of basalt and a type of lava known as trachyte have eroded away at different rates. This differential erosion created the dramatic changes in features and peaks found in the park to this day.

Some of the best examples of these ancient layers of trachyte can be found at the Kaputar Plateau, Mount Dowe, Mount Grattai, and Lindsay Rock Tops. Mount Kaputar itself is a remnant of a much larger flow of trachyte lava that has since been carved out and isolated from the rest of the area.

Mount Kaputar National Park protects a wide variety of plants and animals. Some of the ecosystems that you can expect to see in and around the park include semi-arid woodlands, wet eucalypt forests, and subalpine heaths.

One of the most characteristic plants you’ll see in the park is the grass tree, which is an iconic species in eastern New South Wales. These native plants have thick black trunks and long spiky leaves that grow to be a meter long.

You’ll also find a range of native wildlife in the park, including more than 185 bird species. Some of the birds you might want to look out for in Mount Kaputar National Park include kookaburras, wedge-tailed eagles, and southern boobook owls.

Many of the animals in the park are nocturnal, including possums and greater gliders. However, you can also see kangaroos, wallabies, quolls, and bats at any time during the day. One of the most interesting creatures you might spot is the native pink slug. It can generally be seen after rain on rocks, trees, and amongst foliage, but it stands out with its bright pink color.

Mount Kaputar National Park is the traditional home of the Gamilaroi (Gamilaraay) Nation. For thousands of years, the area that is now the park provided the Gamilaroi with a rich source of food, shelter, and medicine as they migrated through the region.

Many of the features of the park are important parts of Dreaming stories for the traditional Elders of the Gamilaroi. The park is also home to a number of important artifacts and cultural sites, including rock art, ancient campsites, and evidence of ax-grinding grooves.

Before it was declared a national park, the area had been used for grazing livestock for many years by settlers. Several families lived in the area after British colonization, despite the region’s harsh conditions. Stockmen looked after their sheep and cattle on the Kaputar Plateau for many months at a time. This practice continued until around the 1950s.

You can still see remnants of this grazing history while in the park. Visitors to the park can also check out the historic Scutts Hut, which was used in the 1940s and 1950s. It’s been restored to its original condition so you can get an idea of the stockmen's lifestyle.

In 1925, a small piece of the land around Mount Kaputar was declared a reserve for public recreation, and a trust was established just two years later. The area then expanded and was eventually given full national park status in 1959. The trust folded in 1967 and the park came under the management of the New South Wales National Parks and Wildlife Service.

There are quite a few walking trails in Mount Kaputar National Park. Most of these trails take you around the plateau area and up to the summit of Mount Kaputar. The panoramic views that you get on these trails are worth the effort, as they enable you to see across NSW from various vantage points.

With that in mind, here are the best hikes in Mount Kaputar National Park to check out during your next trip to the region.

The Bundabulla Circuit connects shorter walking trails together and leads you on a journey around the Kaputar Plateau. This moderate hike will take you through grassy plains, heath flowers, and rock formations, and it offers the opportunity to spot plenty of wildlife.

Since this is a collection of shorter trails, you can decide how long you want to walk with this circuit. The whole circuit takes you to see Lindsay Rock Tops, Eckford Lookout, and Dawsons Springs, all of which offer some incredible views of Mount Kaputar.

There are various viewpoints along this trail, too, for hikers to enjoy. For example, Eckford Lookout is perched on the edge of a cliff and offers views across the national park while Bundabulla Lookout is a vantage point with panoramic views of the Liverpool Plains. At the same time, Lindsay Rock Tops offers an incredible view of the ancient volcanic landscape.

This easy walk is perfect for families as it takes you around the Dawsons Spring Campground and Picnic Area. This marked trail follows a raised boardwalk through sub-alpine snow gums and over Horsearm Creek.

There are interpretive signs located along the way that showcase the many different plants and animal species that you might be able to spot while you hike. There is also a seasonal waterfall that flows from the creek after heavy rain.

You can combine this walk with the more challenging hike up to Mount Kaputar if you want an extended adventure in the national park.

From the summit, you can enjoy one of the best 360-degree views in the park. The best time to complete this walk is at sunrise or sunset when you can see the colors change over the volcanic landscape. However, if you’re not up for the walk, you can also drive directly to the summit via the 20 km (12.4 mi) Kaputar scenic drive.

Another steep but rewarding climb, this walk takes you to the top of the Governor, which is also known as Corrunbral Borawah. It first follows a boardwalk to a lookout, which offers incredible mountain views. Then, the trail takes you up ladders and rock faces as you make your way to the summit.

You’ll have to be careful though at the summit because it is unfenced and there are some steep drop-offs at the top of the mountain. However, the peak itself offers a 360-degree panoramic view across the Nandewar Range. It’s not uncommon to spot wedge-tailed eagles circling overhead on this hike, too.

For a longer but easier walk, the 8 km (5 mi) loop around Kaputar Plateau is an ideal choice. This trail shows off some of the best flora and fauna in the national park, so it’s perfect for birdwatchers and families who want to appreciate the region’s natural landscape.

For an alternative route on the plateau, consider the Pioneers' track to Dawsons Spring. This hike offers great views and a chance to learn about the human history of the region along the way.

For a lower-elevation hike in Mount Kaputar National Park, consider the trail to Yulludunda. This hike starts at the Green Camp Carpark and it takes you up a steep bluff with a 350 meter (1148 ft) elevation gain in just 1.5 kilometers (0.9 mi).

However, your efforts on this hike are rewarded with a bird’s eye view of the craters and valleys of the park’s landscape, all of which demonstrate the ancient volcanic history of the area.

Mount Kaputar National Park is quite a remote place to visit. The closest town to the park is Narrabri. However, the park itself is a long drive away from the nearest major city, which is Sydney.

That being said, there are places to stay both in and around the park if you’re traveling through the region. Here are some of the best camping areas, cities, and towns to check out during your next trip to Mount Kaputar National Park.

Camping in the National Park

The best way to explore Mount Kaputar National Park is by camping. There are two main campgrounds inside the park boundary, one at Bark Hut Campground and the other at Dawsons Springs Campground.

Here’s what you need to know:

Mount Kaputar National Park is located in a remote place and major towns are hard to come by in the area. However, you can find supplies in the following places:

The closest city to the national park is a decent drive away, but if you’re looking to start your adventure from a capital city, Sydney is your only option.

As Australia’s largest city, Sydney is well-known for its famous harbor and surrounding coastline and beaches. There are plenty of attractions in the city for visitors to enjoy, too, including the Sydney Opera House, Sydney Bridge, Darling Harbor, Royal Botanic Garden, and Bondi Beach.

Mount Kaputar National Park is located about 570 km (354 mi) to the northwest of Sydney. This means that trips to the park from Sydney typically need to be a multi-day adventure as the drive alone is quite a lengthy journey. However, Sydney is a popular city to begin any trip to New South Wales, so you’ll be able to find all the services you need in the city, including an international and domestic airport. 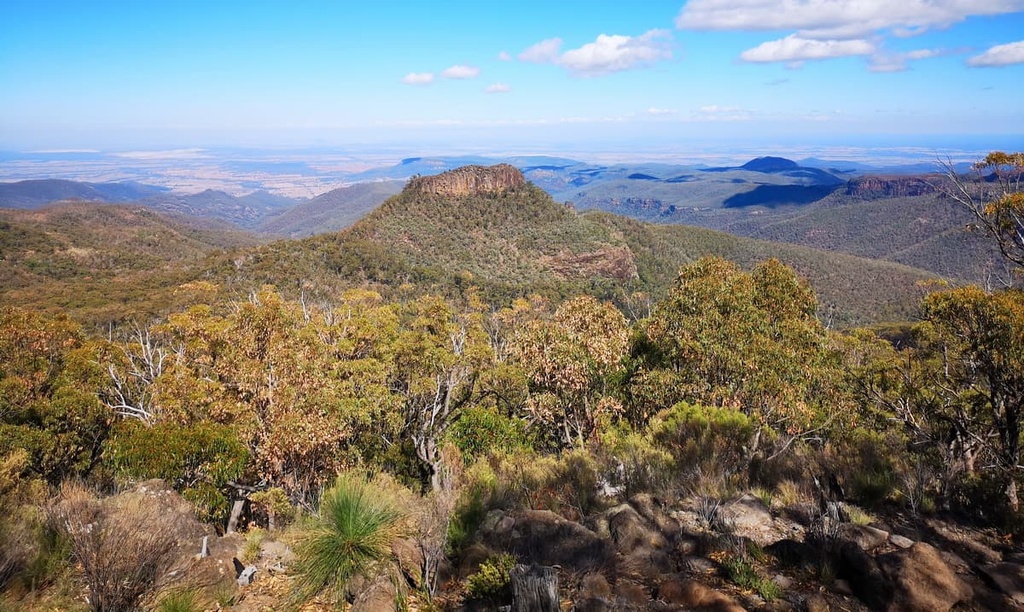 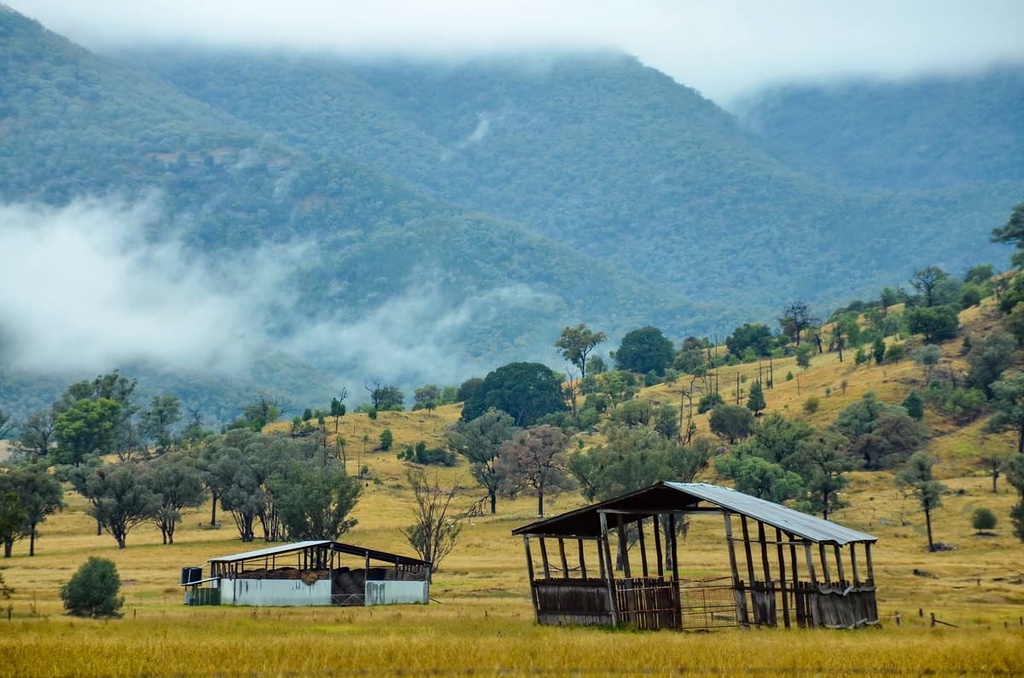 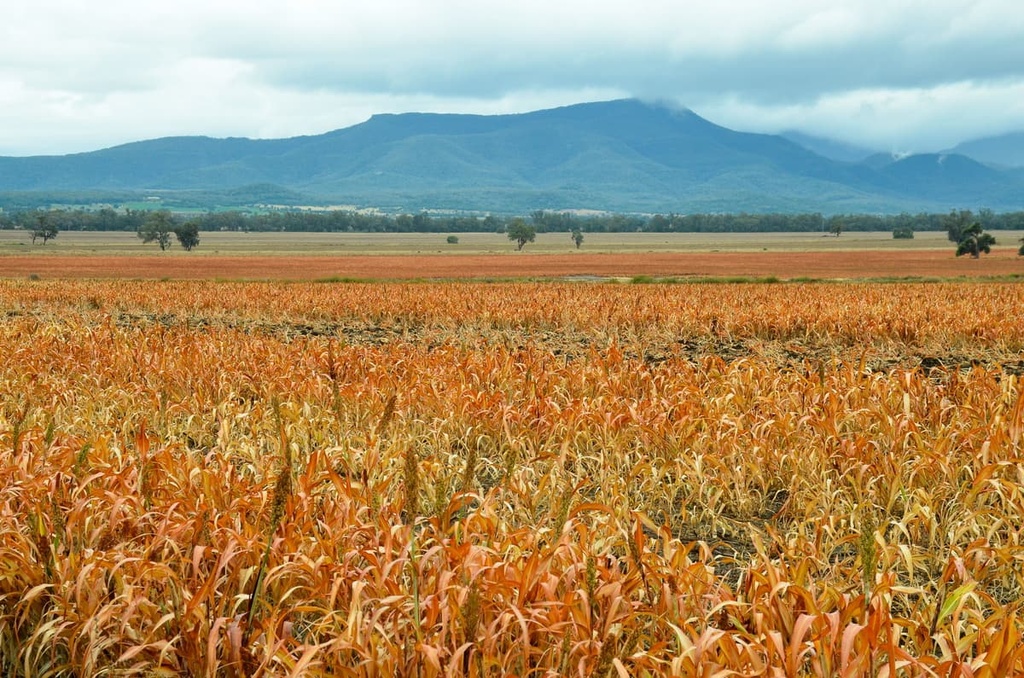 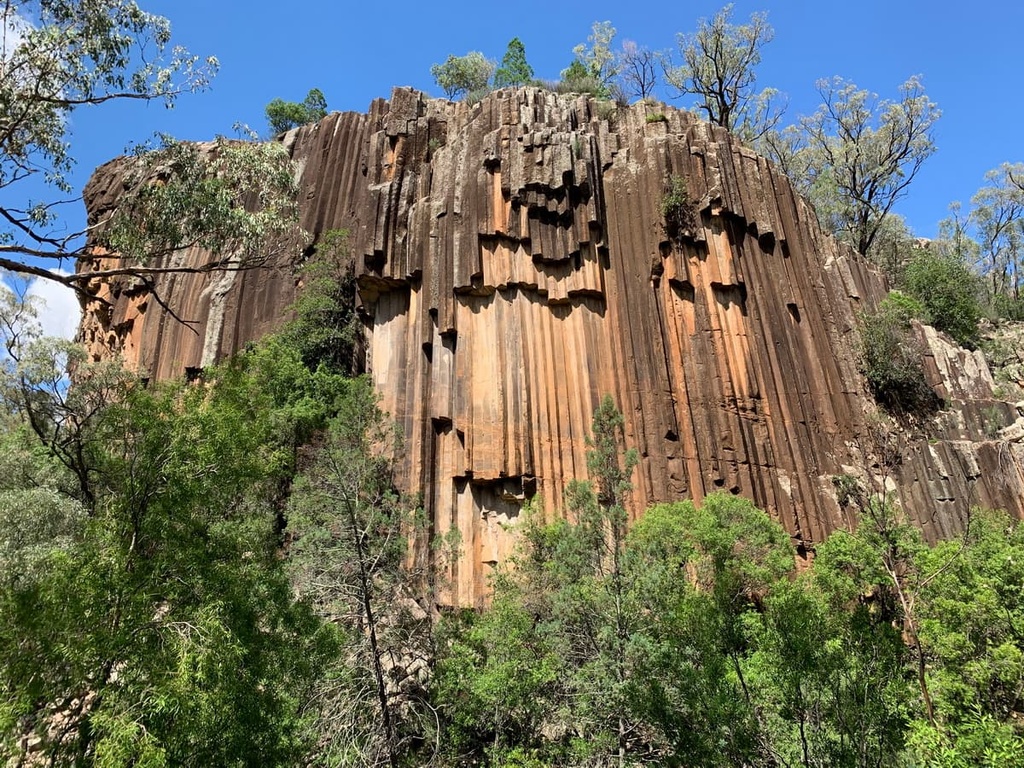 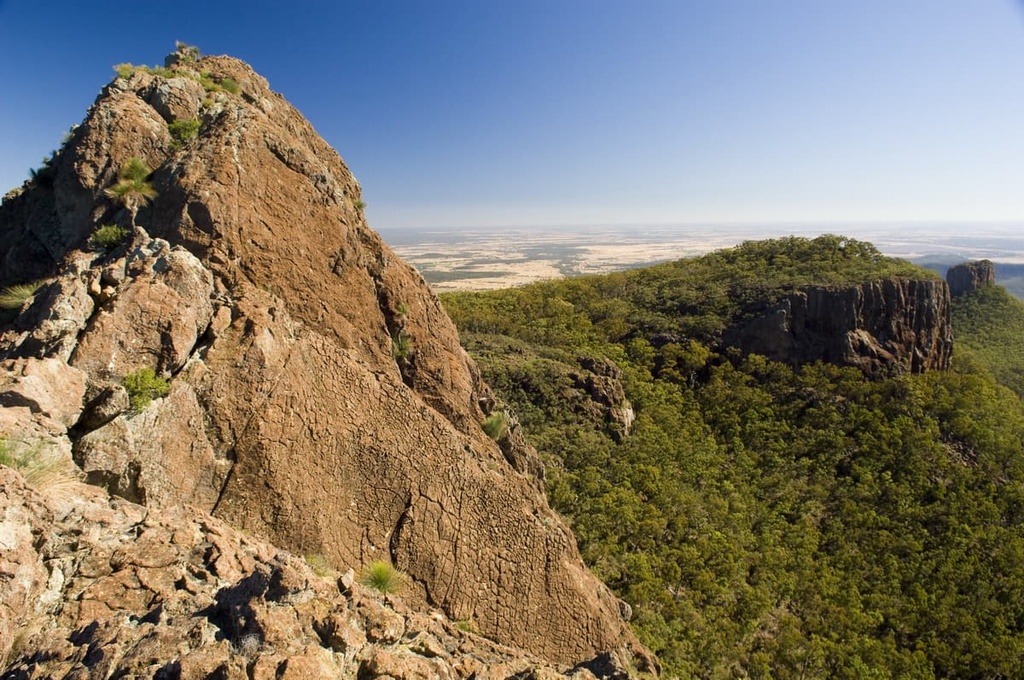 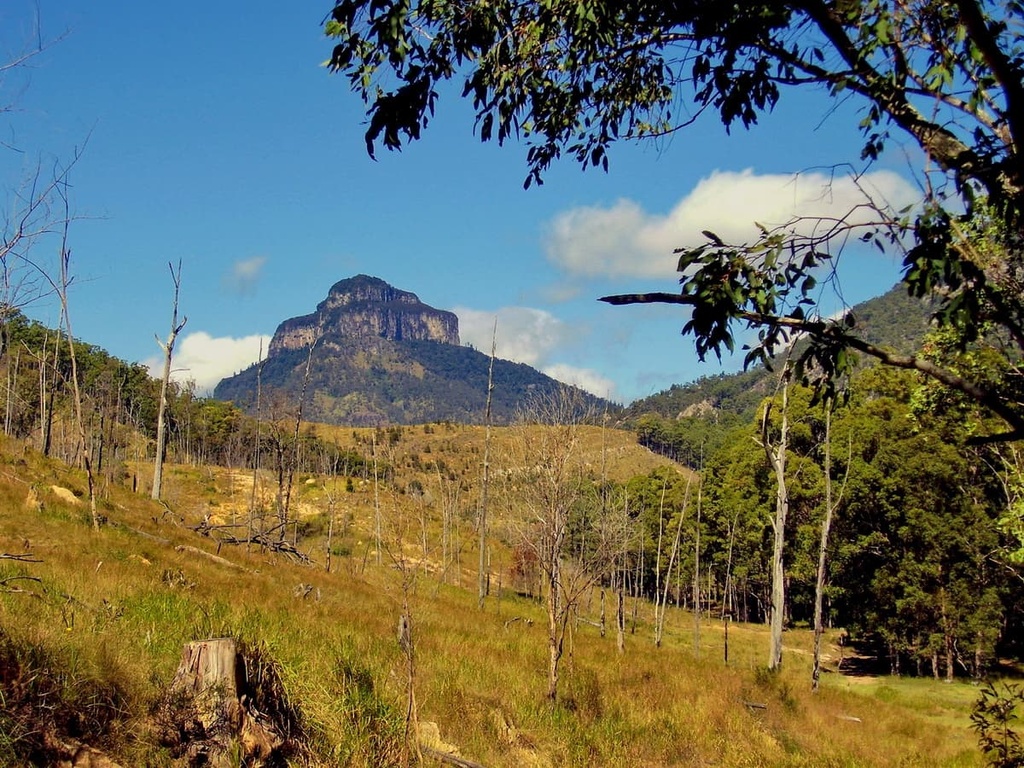 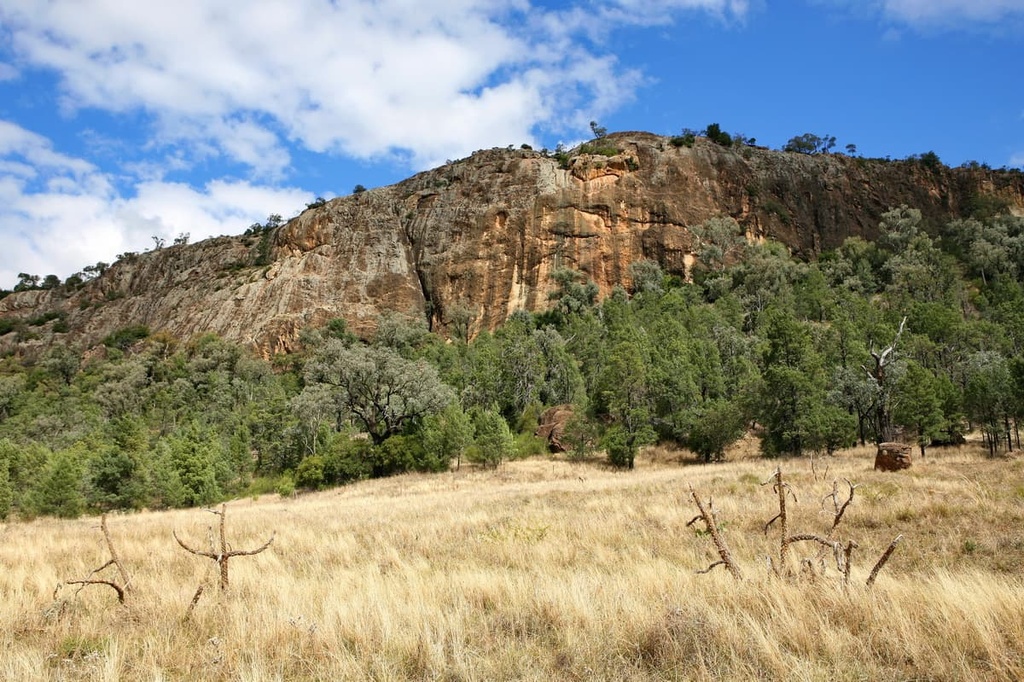