The Bashkiria National Park was established in 1986 and in 2012 it was recognized by UNESCO as one of the specially protected territories of federal and regional importance and since then it has become a part of the greater territory of the Biosphere Reserve Bashkir Ural. 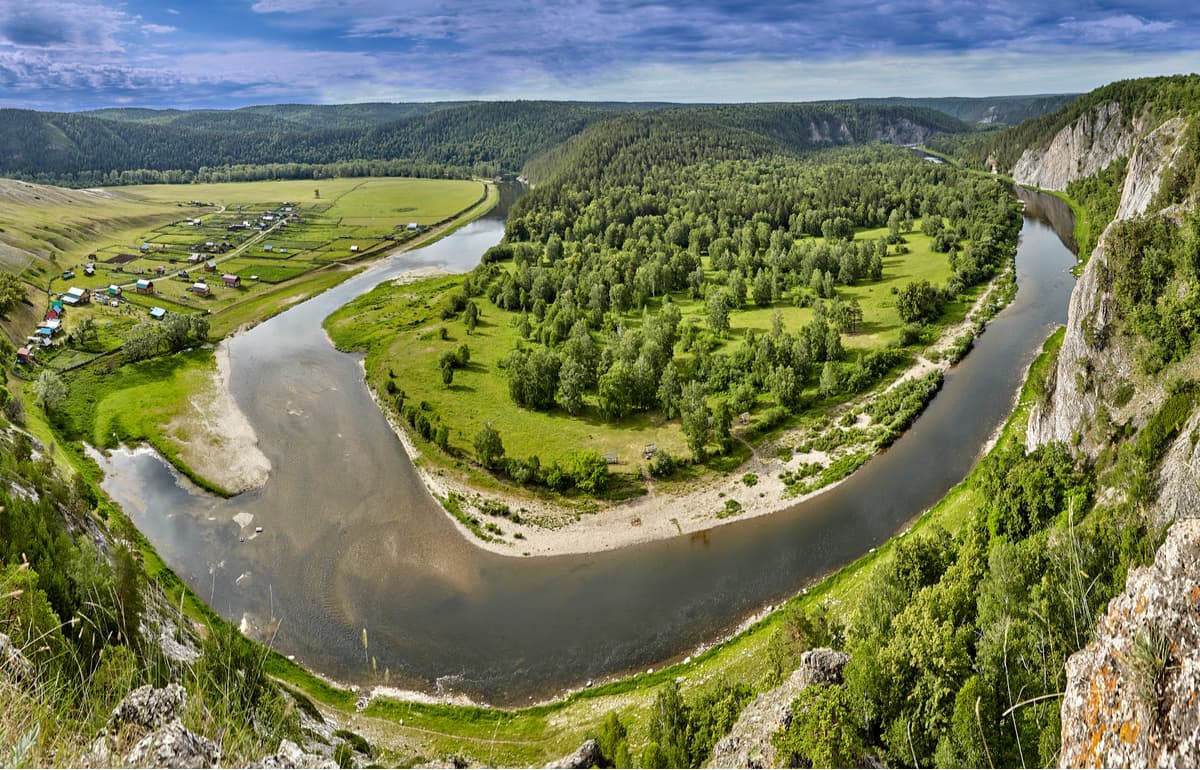 The park is located in the Southern Ural Mountains, its territory is officially assigned to the Republic of Bashkortostan of the Russian Federation. The rivers Belaya and Nugush form its natural borders. The park covers the southwest spurs of the Ural Mountains. The noteworthy ridges of the park are the Uraltau Ridge, the Yamantau, the Kibiz, the Utyamysh, and the Bash Alatau. To the east, the park borders the Shulgan-Tash State Natural Biosphere Reserve.

According to the official stats, the area of the park is 82.3 thousand hectares, including 2.5 thousand hectares of the Nugushskoye water reservoir which is a part the park and not economically exempt, meaning people can do business there. The length of the park from north to south is about 30 km, from west to east is about 50 km. The average elevation is between 500 and 700 metres, the maximum point being 758 metres above sea level.

The mountainous part of the park is mainly folded-block terrain, with steep slopes and flat peaks. There is also the Zilairsky Plateau. The linearly elongated low mountains of the western slope of the Southern Urals mostly represent a karst zone of the fold Urals. In the Bashkiria National Park, karst can be found both on the surface and deep down the ground in the form of hollows, ditches, funnels, wells, clefts, ruins, chutes, remains, tunnels, bridges, caves, abysses, chasms, etc., as well as in the form of common sinkholes. The karst phenomena are most pronounced in the central part of the park (Kutuk landmark, the valleys of the Belaya and Nugush rivers).

The water bodies of the park include the rivers Belaya, Nugush, Irgizla, the Nugush and the Yumaguzinskoye reservoirs. There are plenty of springs and jolly brooks that belong to the Volga water basin. The main river in the park is the Belaya River (or Aghidel), a tributary of the Volga River of the second order. The second most important mountain artery is the Nugush River, a right tributary of the Belaya River. In spring, the river is turbulent and dangerous, in summer it is equally difficult to cross due to numerous rapids. Park lakes are predominantly of karstic origin, e.g. lakes Kukkul, Kutuk, Kapchik (Hare), Kalmash, Mochovoye. Yet, there are some man-made water basins as well, such as lakes Teploye and Kholodnoye (Warm and Cold Lakes), and the Ishtuganovskie quarry.

A large territory of the Bashkiria National Park is covered with broad-leaved deciduous forests. Pine and pine-birch forests as well as shrub steppes are found on some slopes. In river valleys, there are almost impassable alder and bird-cherry forests and wet meadows.

About 800 species of higher plants have been identified in the park, 55 of which are listed in the Red Book. The animal world is represented by typical inhabitants of the Southern Urals: bear, wolf, fox, moose, wild boar, hare, etc. Due to the large number of caves there are 11 species of chiropters, 6 of which are listed in the Bashkortostan Red Book. In general, 12 species of mammals inhabiting the park are included in the Red Book of Bashkortostan Republic.

The climate is continental, characterized by relatively sharp variability and volatility of the weather. Heavy frosts are more pronounced in the northern part of the park; in rare cases, the temperature can reach -45 degrees Celsius (-49 degrees Fahrenheit). In the mountainous parts, there is a special wind regime due to the terrain and orientation of mountain ranges and valleys.

The generally favourable climatic conditions of the relatively mild continental climate, a large number of sunny days and a long warm period of the year attract a great number of tourists who prefer active holidaymaking.

Only a small part of the Bashkiria National Park is accessible for tourists, but it is there that the main sights are located. There are many valuable natural objects, as well as archaeological monuments.

The Bear Glade can boast of a rare species of wild onions. The Pyatilistnik (Pyatikolen aka Five-Knee) Canyon makes the Nugush River jump over big rocks five times. Those rocks are over 100m high and in Russian they are called "knees", thus the name of the canyon.

The main attractions which enjoy easy access via good trails are the Karst Bridge, the Kuperlya Waterfall, and the Kutuk Site.

The Karst Bridge and the Kuperlya Falls

The Kuperlya is the rarest natural formation. The Kuperlya brook, a tributary of the Nugush River, has made an arch in rocks on its way down the slope and it goes under the ground 3-4 km away from this place. The height of the bridge is 20 m, the width is 4 m, the length of both spans is 35 m, the length of the hanging part is 10 m. Not as fantastic as those bridges in The Arches National Park in Utah, but still, given that it is water erosion, the sight is epic.

From a hole in the rock just over 1 meter in diameter, the water stream rushes down and turns into a three-stage waterfall of Kuperlya. The waterfall is the most full-flowing in the period from April to mid-May. You can reach it by boat on the Nugush Reservoir, and then on foot (7-8 km). Along the way, you will encounter wades or fording points in several places.

The Kuperlya Falls in the winter are spectacular. Due to many rapid streams and rivers being frozen in winter, you can reach many places that are inaccessible to visitors in the warmer seasons.

The Kutuk Site and the Sumgan Chasm

The Kutuk Site is a depression formed by the Yamantau and Kibiz ridges and the valleys of the Belaya and Nugush rivers. And not for nothing that it is called a speleological museum. It features karst funnels, cavities, a tunnel, a bridge, springs, Lake Kukkul and 36 large karst caves. Most caves have a complicated structure and some exhibit glaciation spots. Two of them are mines, one cave has an abyss.

The most famous and favourite cave of speleologists is Sumgan Kutuk. It's hard to get into it without special preparation. In the beginning, it is necessary to go down in an abyss (a 116-meter vertical shaft) from which depart three levels of grottoes and passages with a total length of 10 km, which gives a reason to consider this cave the deepest and the longest in the Urals. Here you can also get acquainted with the underground river Sumgan, see the numerous underground lakes, waterfalls, as well as a glacier that does not melt all year round.

The Kutuk Site has the most famous caves. In addition to the Kutuk-Sumgan Cave with a chasm, there are the First, Second, Fourth Kutuk Caves (Kutuk-1, Kutuk-2, Kutuk-4) and the Cascade Cave.

Activists of the Orenburg speleological club have opened several new caves in recent years. Among them is the Summer Cave. Its length is 2,780 m, depth is 155 m. Now it is considered the second largest and most difficult to pass after the Sumgan-Kutuk cave. The Summer Cave is very beautiful, it is rich in speleothems of various shapes and sizes, there are snow-white covers, stalactites, stalagmites, columns, as well as huge rim-stone pools. This cave has its own underground river.

Mount Tally has been considered sacred since times immemorial. There is an eco-trail to it. The hiking route to the mountain starts from the visitor’s centre of the park. At the top of the mountain, there are two viewing platforms with a view over Nugush settlement, the Nugush Reservoir and the dam. On the way to the top, there is a cave called The White Mosque.

Beyek-Tau (or High Mountain) is another mountain to which there is a hiking trail laid. The trail starts in the recreational area named the 45th Kvartal in the village of Sergeyevka. The elevation gain is 400 m. The trail runs through the forest and leads to the top of Mount Beyek-Tau, the ascent is partially equipped with steps. There are three viewing platforms on the mountain, they offer grand views of the surrounding mountains, the village of Sergeyevka, the Nugush Reservoir, the Nugush Gorge. The route includes a visit to the Mystery Cave. The trail is open from May to October.

Antonova (Anton’s) Rock Recreational Zone is located near the village of Kutanovo, on the banks of the Yumaguzinskoye Reservoir. It is equipped with viewing platforms, gazeboes and campsites if you wish to sleep overnight in a tent. On the way to Antonova Rock, you will see the Kutanovo Cave. This area is open from May to September.

Archaeological excavations prove that people have been living in the territory of the Bashkiria National Park since ancient times. This is evidenced by the settlement sites found during excavations before the construction of the Nugush and the Yumaguzinskoye reservoirs, as well as during the design of the Ishtuganovskoye reservoir. Nineteen archaeological monuments of the Stone Age, Bronze Age and Early Iron Age were discovered in the flooding zone of the Yumaguzinskoye reservoir. Of the 20 caves examined, traces of an ancient man were found in ten of them and 8 of caves were classified as unique.

The Bayslan-Tash and Muynak-Tash caves keep the remains of all historical epochs starting from the Paleolithic Era more than 30 thousand years B.C. to the present time.

The Bayslan-Tash cave is located near Akbuta village on the right bank of the Belaya River, its entrance is in the limestone rock. The cave has two entrance holes, three large underground halls which are connected with each other by narrow passages, as well as ice pillars that do not melt all year round.

The Muynak-Tash Site (called the "Devil’s Finger") is a natural site with the Muynak Rock and Theatre Cave. This cave connects the southern slope of the mountain massif with the Kyzlaryalan Gorge. The site is located on the right bank of the Belaya River, eight kilometres from Akbuta village.

Recent archaeological excavations have also revealed new findings at Sergeevka man-site. The cave in the Imanay Ravine has become a new subject of research. Judging by the found artefacts, scientists assume that the Nugush man was treading this territory 70 000 years BC.

The park organizes hiking for tourists of all shapes and sizes. There are classical hiking routes, water hiking, horseback riding tours to the most beautiful and popular attractions. Routes are of varying difficulty, there are easy-peasy routes that are suitable for families with children. Should you wish to take up some water routes and do some rafting up or down mountain rivers, the best time is spring. In winter there are skiing or snowmobile routes.

The park has developed the Tally, Kutuk-Sumgan, Beyek-Tau, Kuperlya, Reactional zones (the 45th Kvartal, Antonova Rock) routes. The most popular among tourists are climbing the Tally Mountain, visiting the karst bridge and waterfall Kuperlya, hiking to the Kutuk Site and visiting its caves.

Employees of the national park rent motorboats, cars (including trucks and SUVs) and even a tractor. On the Nugush reservoir, you can go for a boat ride along the beautiful coast.

There are also workshops on the basics of photography in the park.

To get to the Bashkiria National Park, you need to drive to Nugush settlement of the Bashkortostan Republic.

A visit to the Bashkiria National Park involves a small fee. You can get the visit permit and pay for the tickets on the park's official website npbashkiria.ru or get it from the park's representative offices, which are also listed on the website. There you can also find up-to-date information on how to get to the park, about the recreation centres and current routes of the Bashkiria National Park. 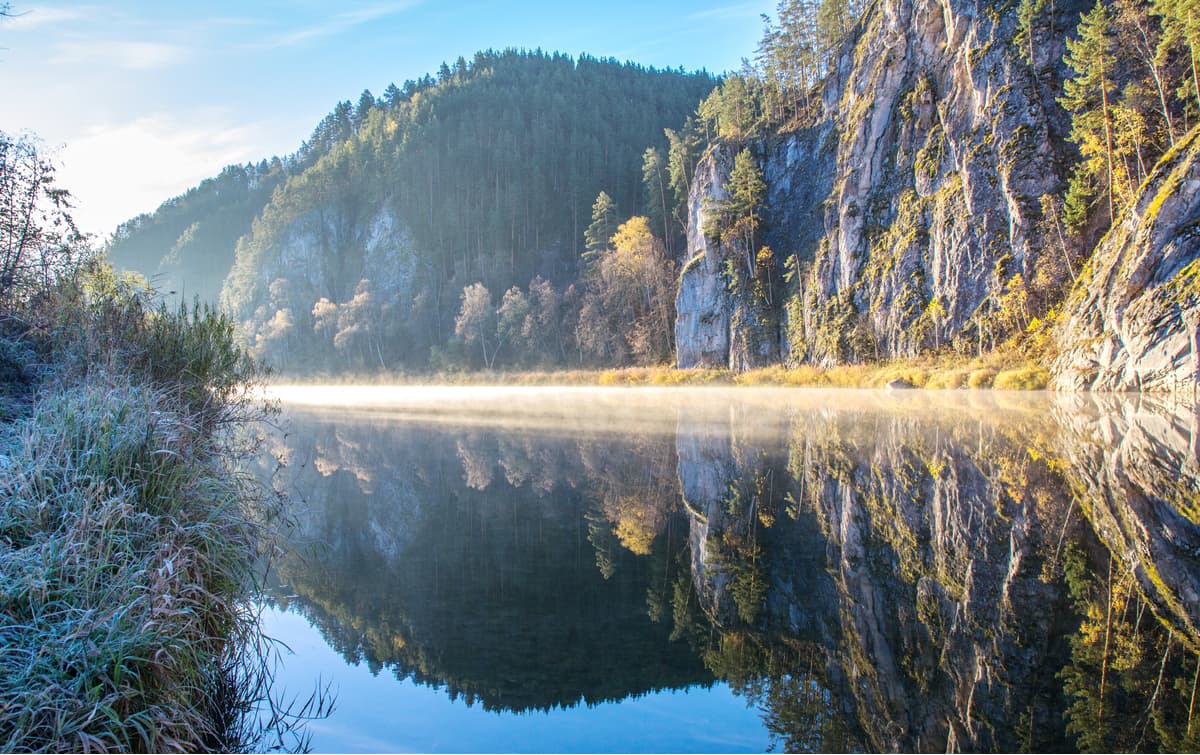 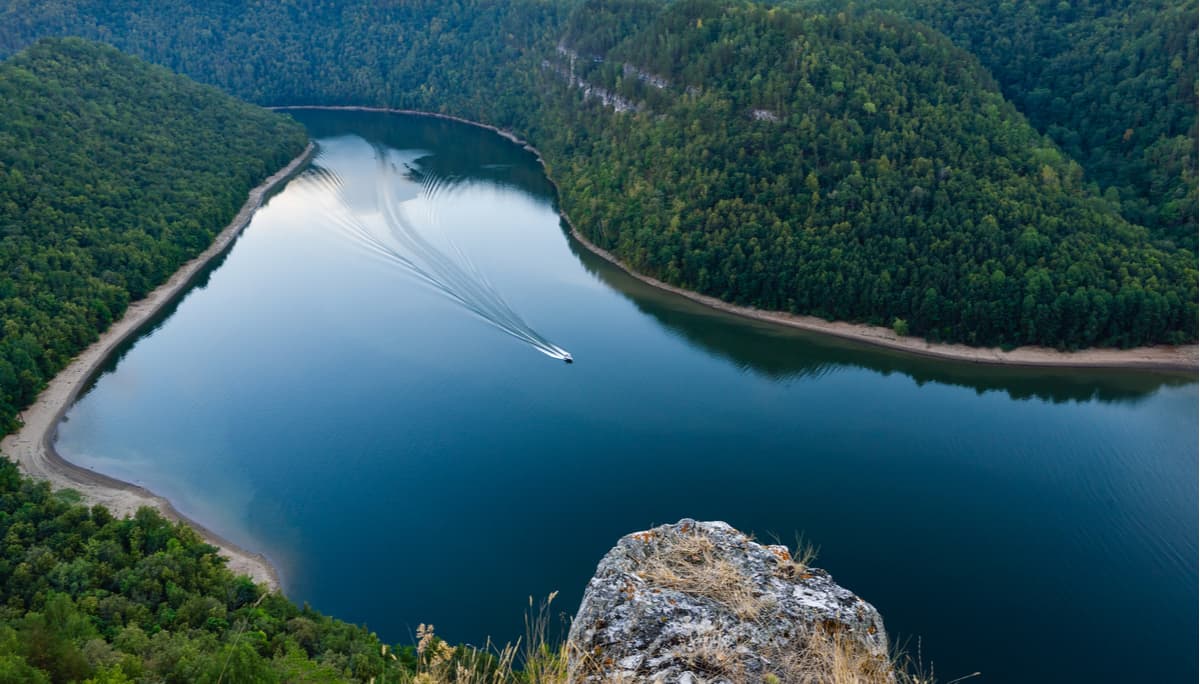 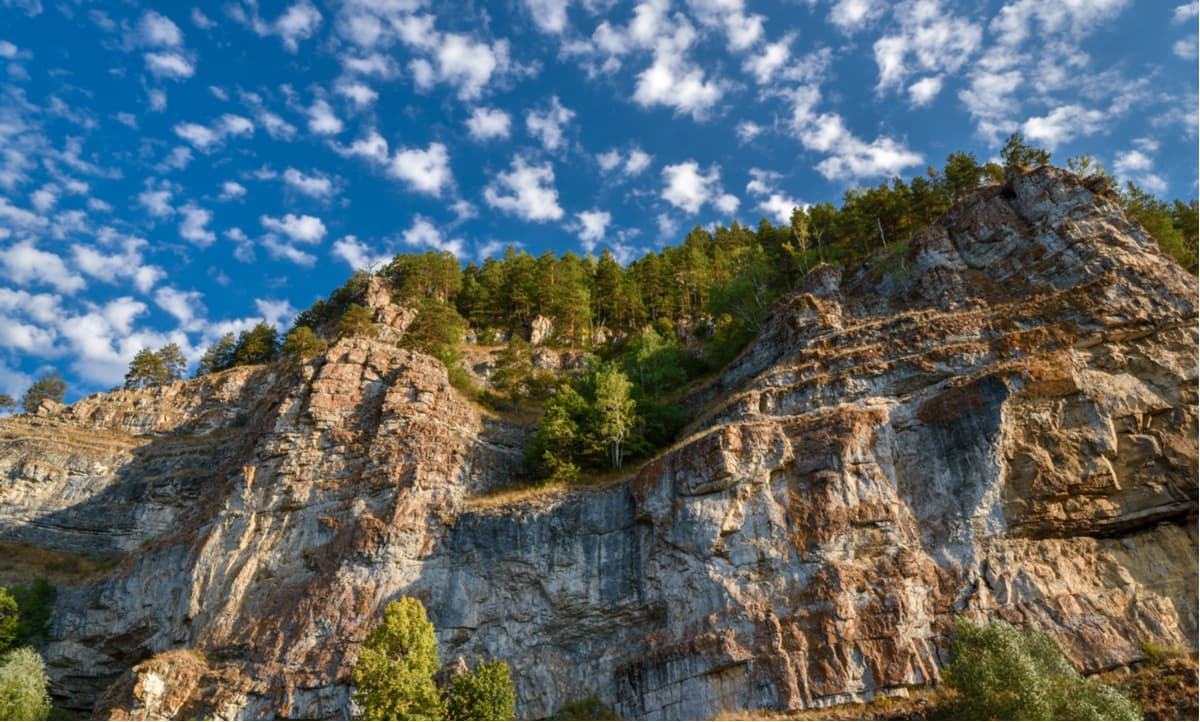 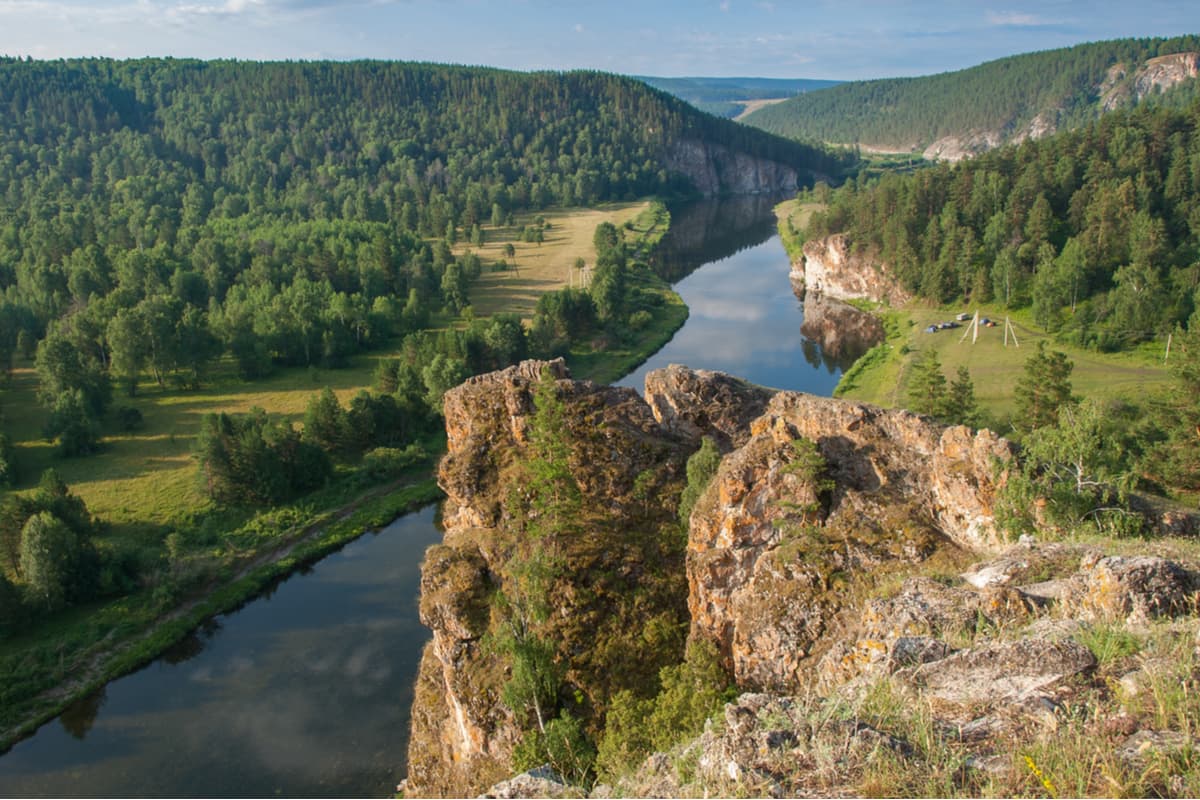 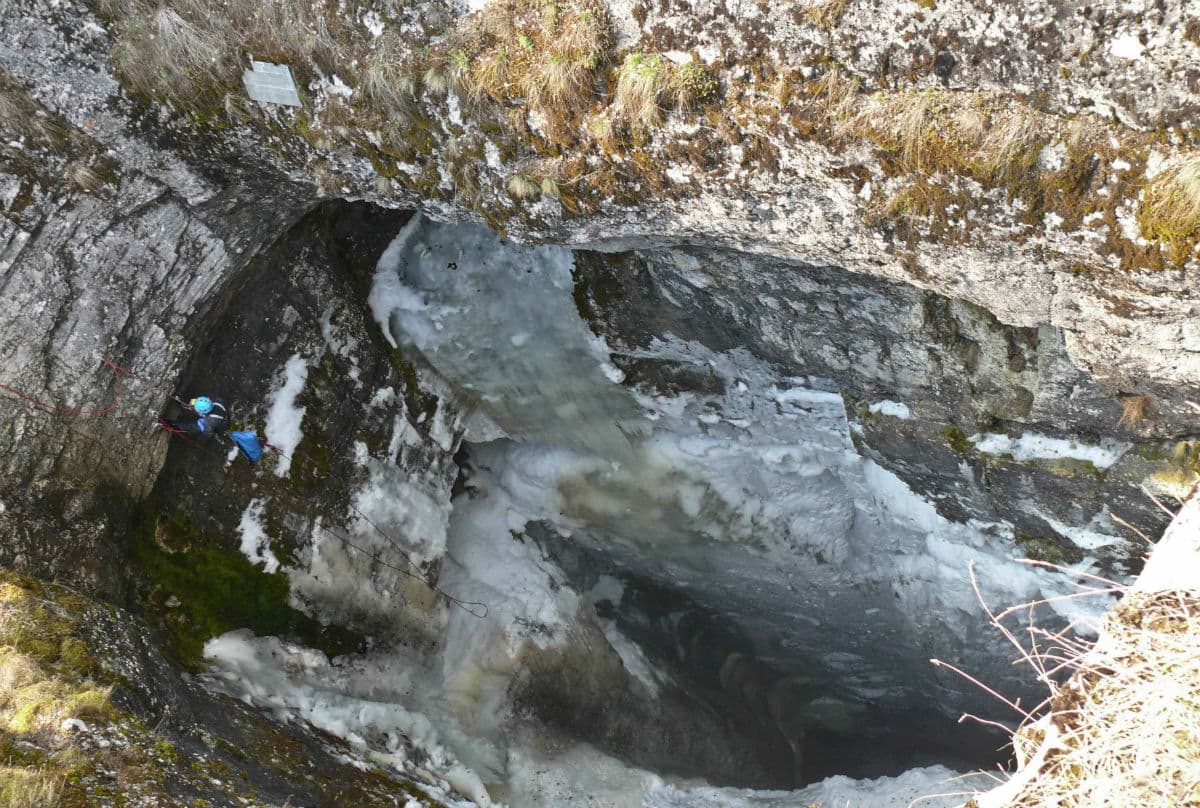 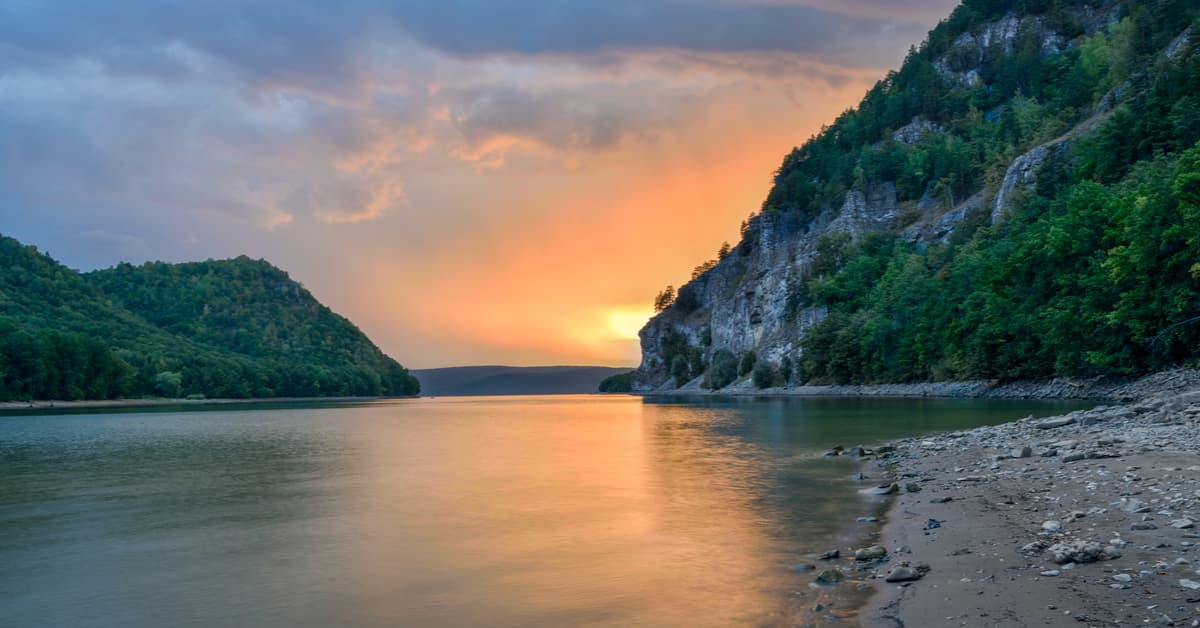