There are 335 named mountains in Elk Range. Castle Peak is the highest point. The most prominent mountain is Mount Gunnison.

The Elk Range is a sub-range of the Rocky Mountains in North America. It is a high and rugged range of mountains located entirely in the state of Colorado, and extends for about 30 miles south to north and about the same distance from west to east, in the west-central part of the state. While the range encompasses numerous mountains of significance and prominance, the Elk Mountains are perhaps best known for their proximity to the major ski resorts of Crested Butte and, especially, Aspen, which is often associated with being the playground of the rich and famous. But for outdoor enthusiasts, the real attraction here is the group of fourteeners (peaks exceeding 14,000 feet or 4,268 meters in elevation). Tourism is unquestionably the dominant industry here, having long overtaken the early dominance of mining during the 19th century.

The five official fourteeners (Castle Peak, Pyramid Peak, Maroon Peak, Snowmass Mountain and Capitol Peak) are all positioned generally south and west of Aspen and are for the most part considered destinations for highly experienced hikers and climbers. While not necessarily technical in nature, although such routes do exist, these peaks deserve respect in terms of their degree of difficulty and exposure. Access to these peaks can be challenging in that there are no suitable all-season routes to their trailheads (the possible exception being the Maroon Bells, see below), thus necessitating long approach hikes before climbing can even begin. As for vehicular travel across the Elk Range, the visitor is well-advised that traversing this range is mostly limited to back-road passes and trails. Therefore, ordinary passenger vehicles are generally excluded.

Perhaps one of the features of the Elk Range that surpasses all others in term of popular appeal are the Maroon Bells. These two summits over 14,000 feet in elevation, Maroon Peak and North Maroon Peak, are easily the most photographed mountains in Colorado and possibly even among the best-known mountains in the entire country (some even claim that they are the most photographed mountains in all of North America). A paved road goes all the way to the popular viewing site at Maroon Lake, although it is closed in the winter. Due to the popularity of these mountains, the road is often closed to private vehicles, so that when the parking lots fill up, often by 8:00 in the morning, visitors are limited to taking a bus.

Much of the Elk Range, and especially the Maroon Bells and other nearby mountains, consist of highly weathered and very loose sandstone. This crumbly terrain is difficult even for the experienced mountaineer, and visitors are strongly advised to avoid any attempts to venture beyond maintained hiking trails. Because of the many deaths that have occurred here, these peaks have been given the dubious unofficial name of the "Deadly Bells". Even experts tend to shy away from these mountains.

While the high peaks of the Elk Range may be intimidating, that is not to say that exploring this range is limited to only seasoned climbers and hikers. There are many places where even casual hikers can enjoy stunning vistas, wildlife and wildflower displays. In fact, the resort of Crested Butte has been designated the Wildflower Capital of Colorado. Simple hikes of only a few miles, to much longer ones requiring overnight bivuacs, can be negotiated on well-built and maintained trails by anyone with a reasonable level of conditioning. Altitude, however, can be a problem for some visitors that are not acclimated.

Maroon-Snowmass Trail to Crater Lake - This major trail encompassing a round-trip hike of about six miles is likely the most popular in the entire Elk Range. Due to its easy access from the end of the Maroon Lake Road, visitors of all abilities give this trail plenty of use. In fact, so much use that it can hardly be called a wilderness experience. However, there is probably no other place in this range that will provide the hiker with so much spectacular scenery for such little effort. Upon reaching Crater Lake, the casual hiker is not likely to proceed further, but for those who are experienced and properly equipped, continuation on the trails to West Maroon Pass or to Buckskin Pass can take the hiker miles into the Maroon Bells-Snowmass Wilderness. The only limitations then are time and preparedness. This is also the place where climbers will start their ascent of the Maroon Bells.

Snowmass Lake Trail - Near Snowmass Village is the beginning of the trail to Snowmass Lake, which involves a one-way hike of 8.5 miles. This would be a difficult one-day hike for most people so that backpacking is the order of the day here. But, given the stunning scenery and view of Snowmass Mountain above the lake, one would not want to immediately turn around and go back down. This view rivals that of the more popular Maroon Bells, and the opportunities of further exploration in the wilderness area make a multi-day excursion a very memorable experience. With numerous campsites at or near the lake, this is a perfect staging area for an assault on Snowmass Mountain. Of course the interconnectivity of so many trails make even longer excursions possible in this area. This trail is very popular, but of course not on the scale of the Maroon Bells.

Cathedral Lake Trail - For those wanting to get a bit further away from the crowds at Maroon Lake, yet still not far at all from Aspen, a hike to Cathedral Lake is a good intermediate-level alternative. Located just off the Castle Creek Road to the historic ghost town of Ashcroft is the trailhead for this 6-mile roundtrip hike encompassing about 2,000 feet of elevation gain. This moderate-difficulty hike ends in a stunning rocky basin containing this very beautiful lake. Cathedral Lake is an alpine jewel surrounded by jagged peaks and crags. For those who have the time and energy and want a more challenging hike, the steep trail to Electric Pass offers a spectacular viewpoint. It is recommended that those who wish to do this go to the pass before visiting the lake. Electric Pass (elevation 13,485) is the highest named pass accessible by trail in Colorado and is a magnet for lightning, so hikers are advised to be off the pass by noon to avoid the inevitable afternoon thunderstorms.

Mount Sopris - One of the most stunning mountain views in Colorado is that of Mount Sopris when one is driving from Glenwood Springs toward Aspen. This mountain is notable for having two summits of equal elevations of 12,965 which are about one-half mile apart. Because of the elevation of the surrounding terrain, this mountain, which is at the northern end of the Elk Range, has the appearance of being much higher than its southern neighbors. The Mount Sopris Trail begins at Dinkle Lake near Carbondale and ascends East Sopris via the east ridge after passing between the two Thomas Lakes at about timberline. The ascent involves 4,300 feet of vertical gain in a round trip of 12 miles (an additional mile plus another 600 feet of elevation if a round trip to West Sopris is desired). The total hike is very strenuous and can be made easier if an overnight stop at Thomas Lakes is included in the overall tour. Exposure to lightning can be an issue here. 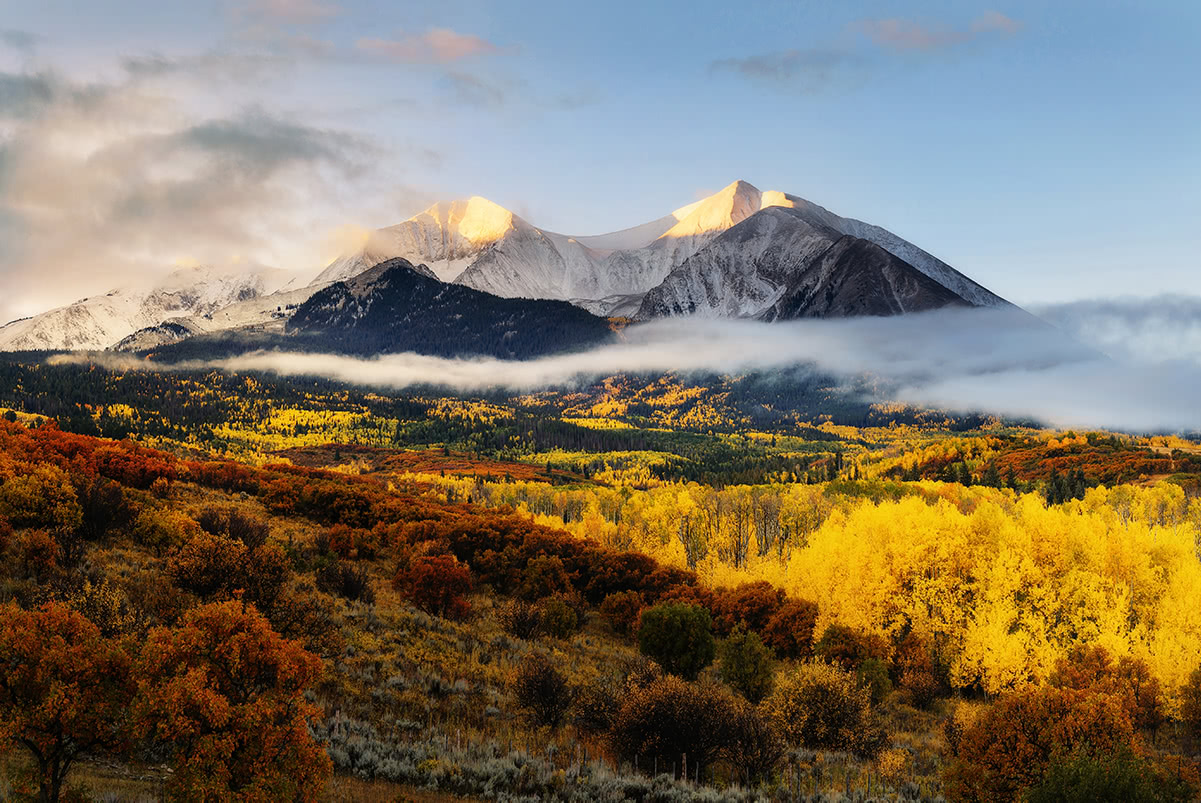 Capitol Creek Trailhead - Getting to this trailhead involves driving on a rough forest road from the town of Snowmass (not Snowmass Village, which is the ski area) that may or may not require four-wheel drive, depending conditions from year to year. Certainly high clearance is preferred here. The view of Capitol Peak from the trailhead is classic. The Capitol Creek Trail extends all the way to Capitol Lake which sits at the base of the north face of the imposing Capitol Peak. This is also the trail for those who want to go for the summit, a climb that is not to be taken lightly. The standard Knife Edge route can be intimidating, and there are no easy route on which to bail off in case of bad weather. The north face of Capitol Peak is one of the highest mountain walls in Colorado. The knife edge route is considered "relatively easy" even though it reaches Class 4 in places. The hike up the mountain beyond the lake is not for the casual hiker. This mountain offers perhaps the best technical climbs in the Elk Range. 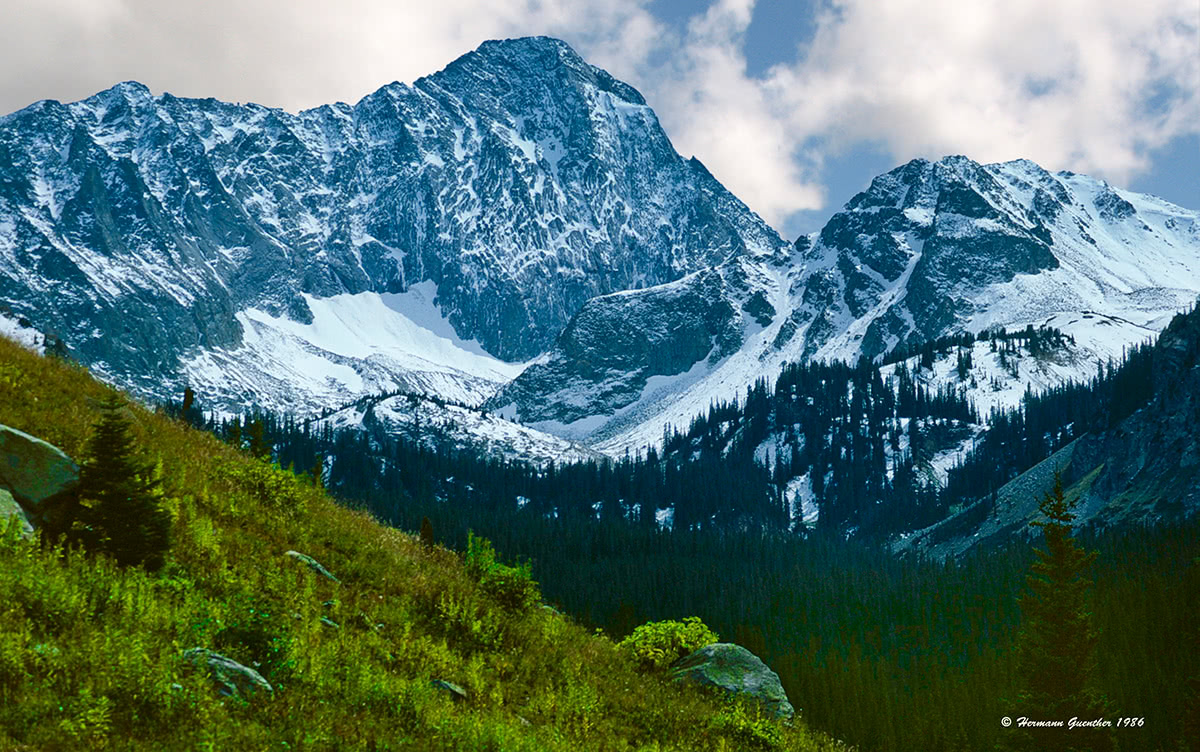 Lead King Basin/Geneva Creek Trail - If one drives from Glenwood Springs to Carbondale, and then continues south toward McClure Pass, there is a pleasant approach to the central high peaks of the Elk Mountains, especially to Snowmass Mountain. It requires a four-wheel drive vehicle to get from the historic town of Marble to the Geneva Lake Trailhead in Lead King Basin. This trail affords access to three high alpine lakes (Geneva, Little Gem and Siberia Lakes) and affords pleasant camping spots, especially at Geneva Lake. From the north end of this lake is the junction of another trail that leads over Trail Rider Pass to Snowmass Lake and a very pleasant route (Class 3 in places) to the top of Snowmass Mountain. This can be done in a day hike from your campsite. While this is a fairly popular trail, it is still not very crowded because of the effort required just to drive to the trailhead. Parts of the road can be intimidating for some drivers. 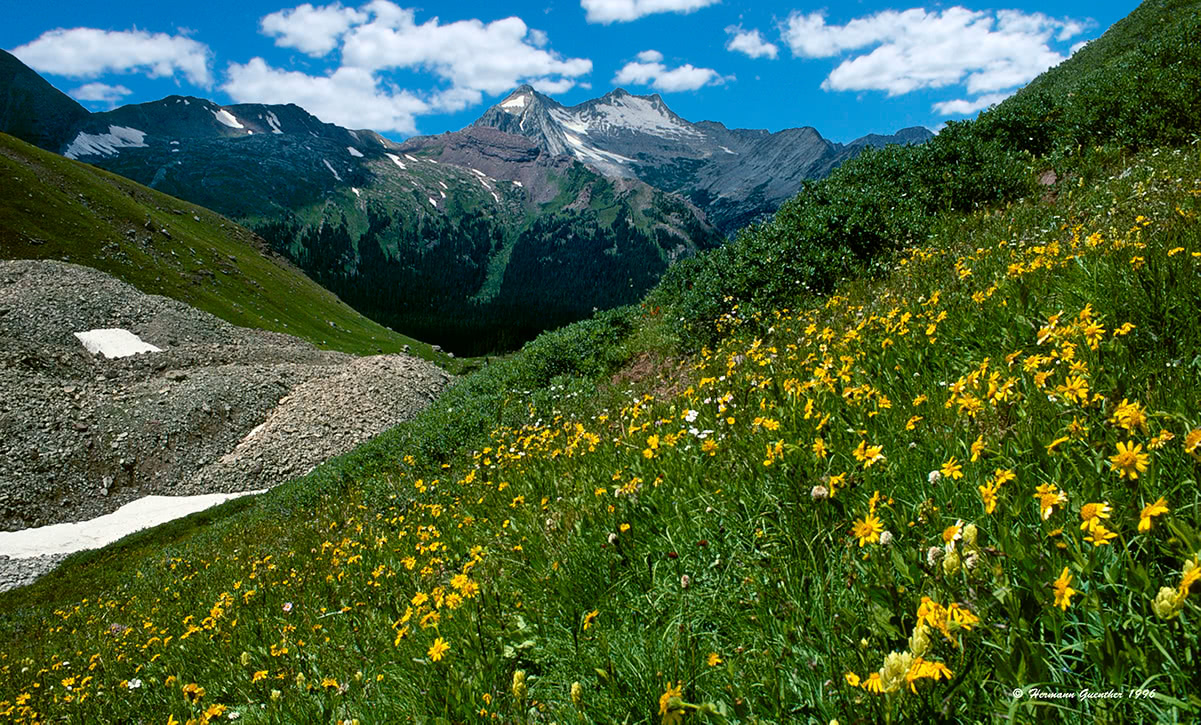 Who has not heard of Aspen, Colorado? It started as a silver mining town in the late 1800's and was highly successful until 1893 when the silver market collapsed. The town was so named because it is surrounded by forests of Aspen trees, which in the autumn exhibit an impressive display of gold color. This is the only town in the Elk Range that has a major airport with scheduled airline service (although Crested Butte at the southwestern end of the range is served by a small airport at Gunnison about 30 miles away). Aspen is known for high-end lodging, restaurants, boutiques and many celebrities (who fly into Aspen in their private jets). The Aspen area boasts four major ski areas - Aspen Mountain, Buttermilk, Aspen Highlands and Snowmass, which is a separate resort development about ten miles from Aspen. This is a year-round town that offers unlimited recreational opportunities.

About forty miles north of Aspen is the historic town of Glenwood Springs which is best known for its hot springs and vapor caves. It has grown into a vibrant destination of its own, affording many dining, lodging and cultural opportunities. It serves as an easy gateway, via excellent highways, to the most visited parts of the Elk Range. As with many towns in the Rocky Mountain West, Glenwood Springs started in the late 1800's as a camp of tents, saloons and brothels. This of course attracted hordes of gamblers, gunslingers and prostitutes. It has changed significantly since those days. It is an elegant town in a dramatic setting at the confluence of the Colorado River and the Roaring Fork River. Its proximity to Aspen and the main attractions in the Elk Mountains make this town an ideal base of operations for those wanting to explore this spectacular region.

This alpine village is located in a mountain valley at the southwestern end of the Elk Range. It is a major ski resort but much smaller and a bit more low-key than Aspen. Although the straight-line distance from Aspen is less than 25 miles, the imposing barrier of the Elk Range make a drive from one to the other a minimum of 4 hours - in good weather conditions. This make Crested Butte relatively isolated in the center of Colorado. But its stunning setting makes it a worthwhile destination, which affords relatively easy access to the less-visited western sections of the Elk Range. Crested Butte has been officially designated the Wildflower Capital of Colorado. It is served by a regional airport in Gunnison, about 30 miles away. 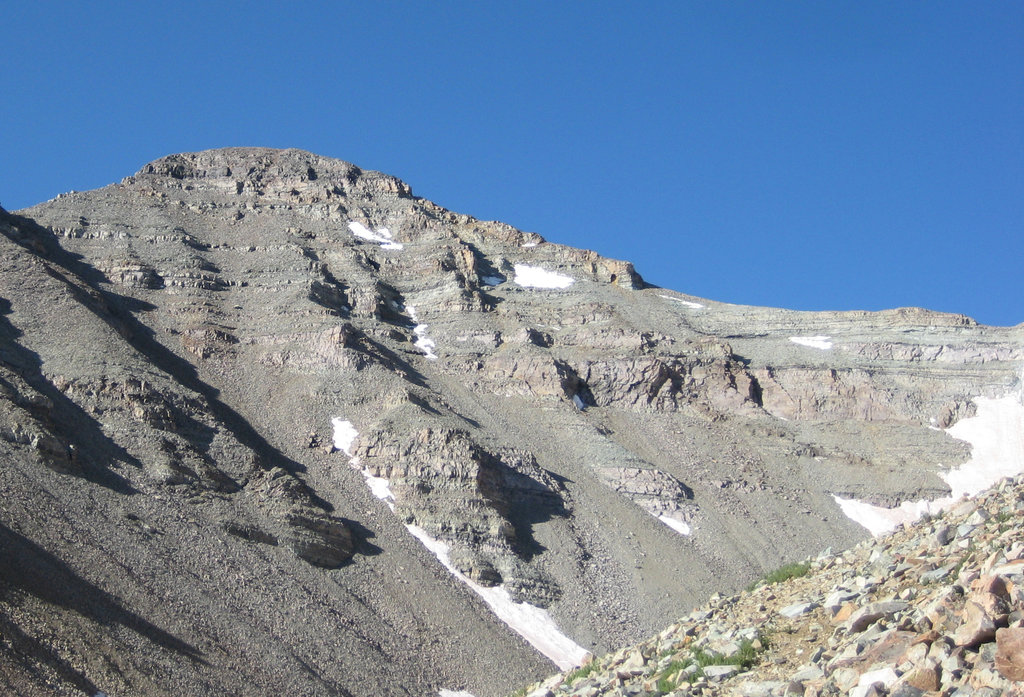 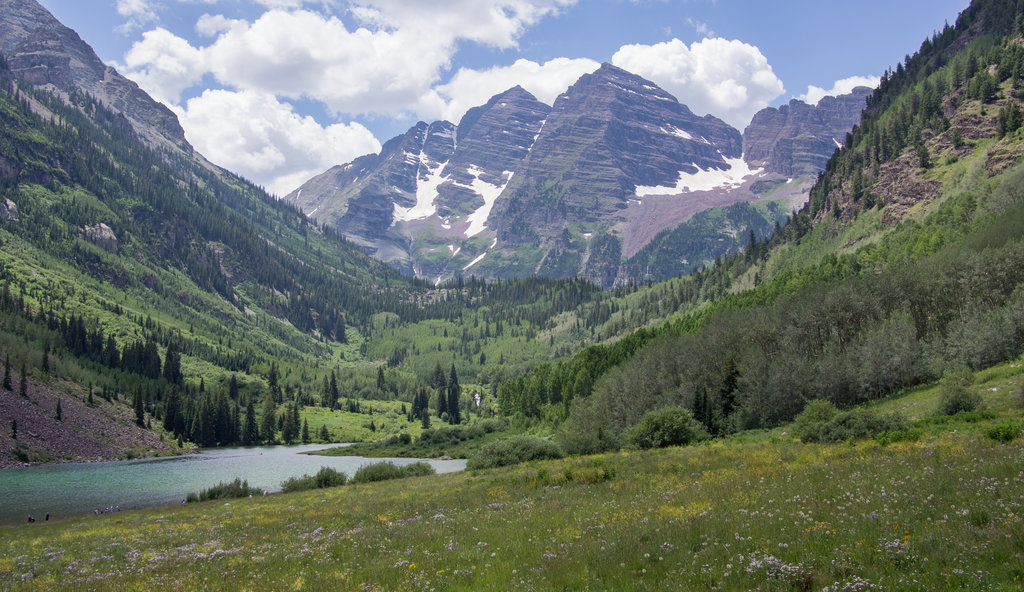 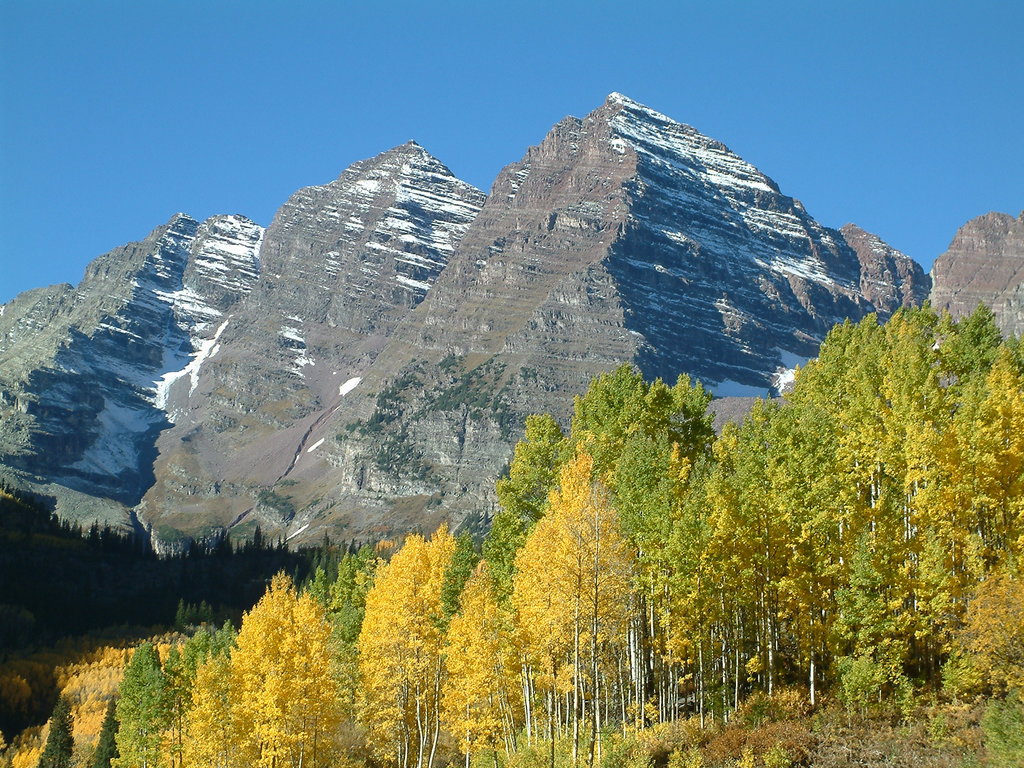 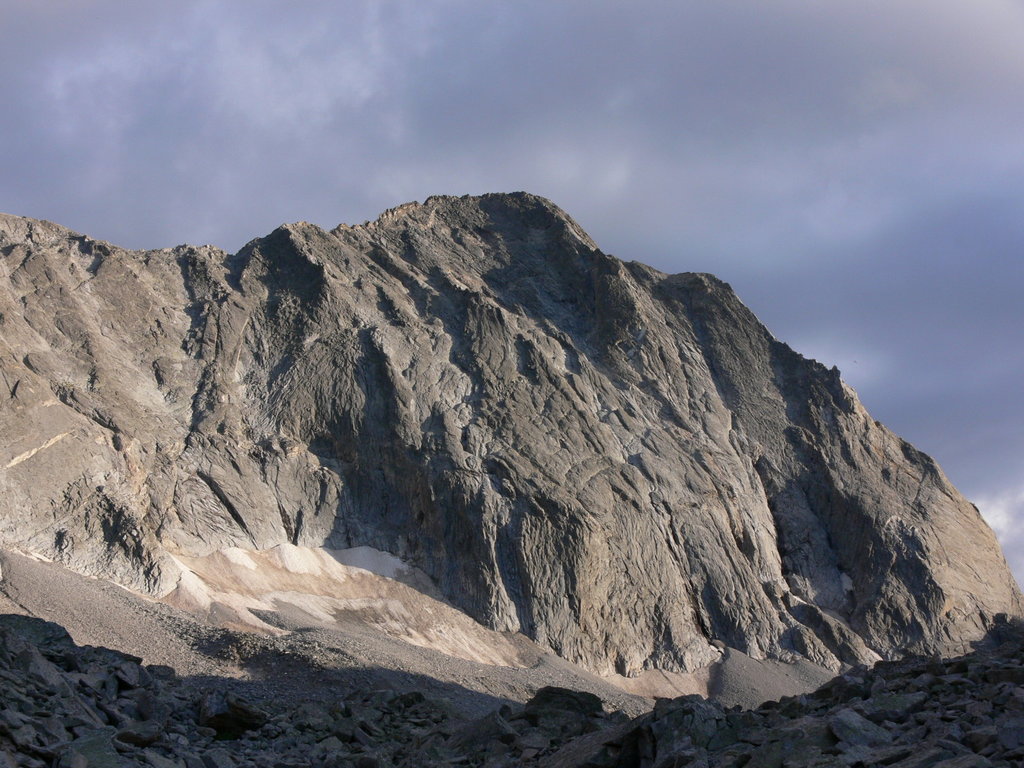 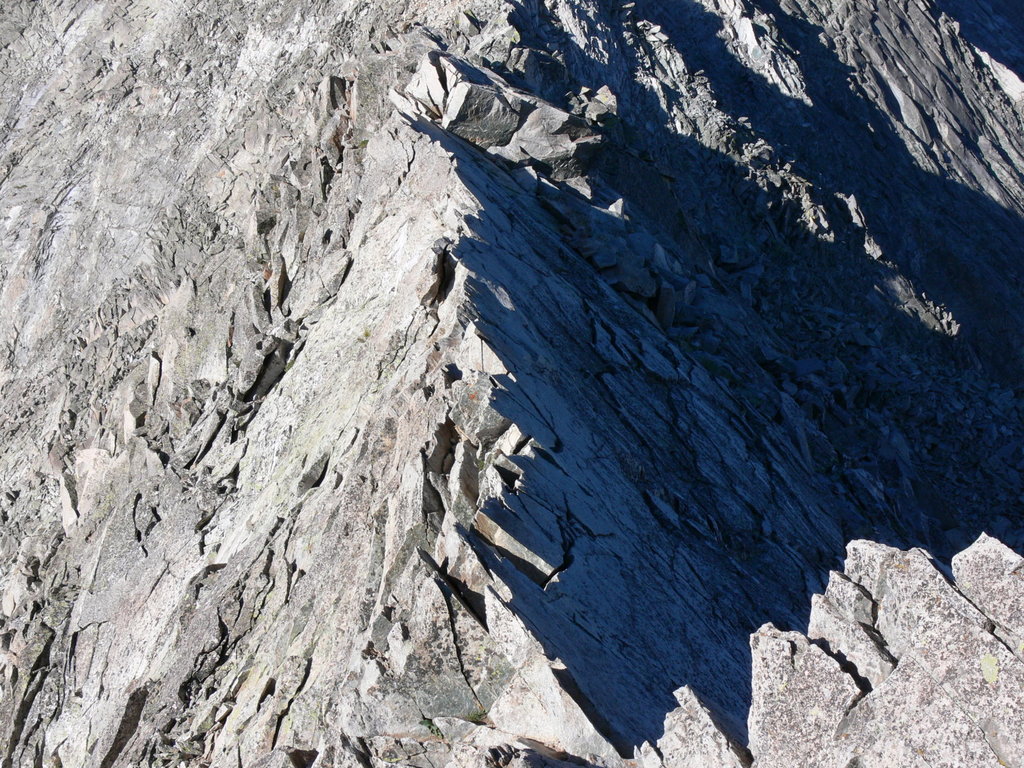 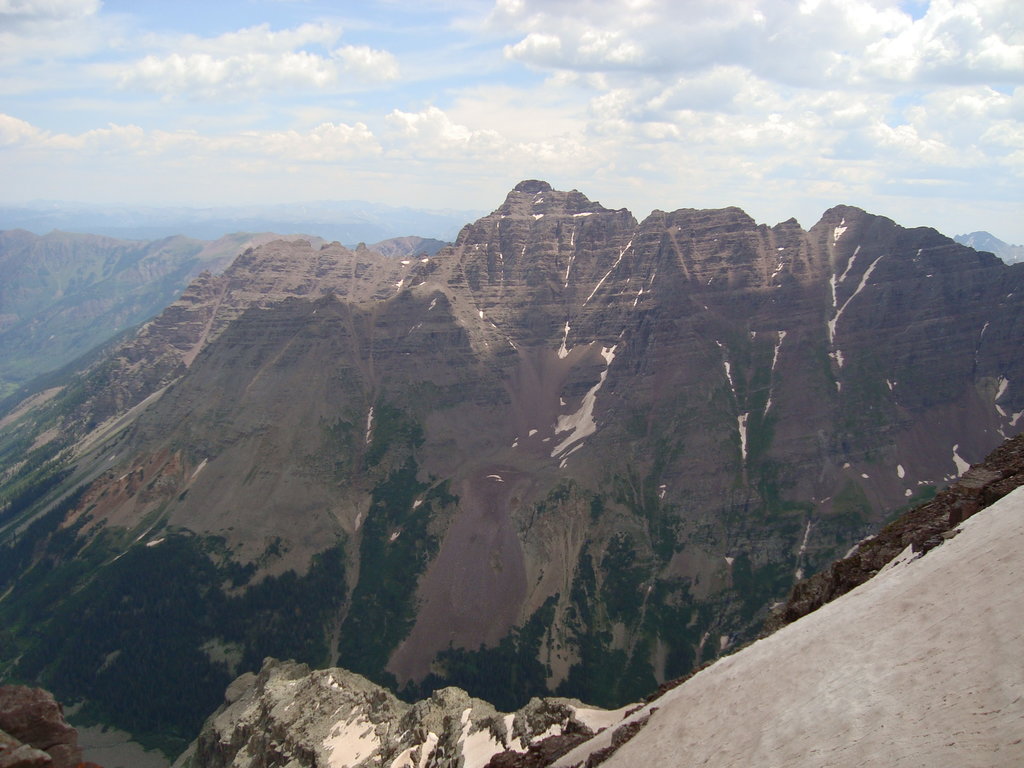 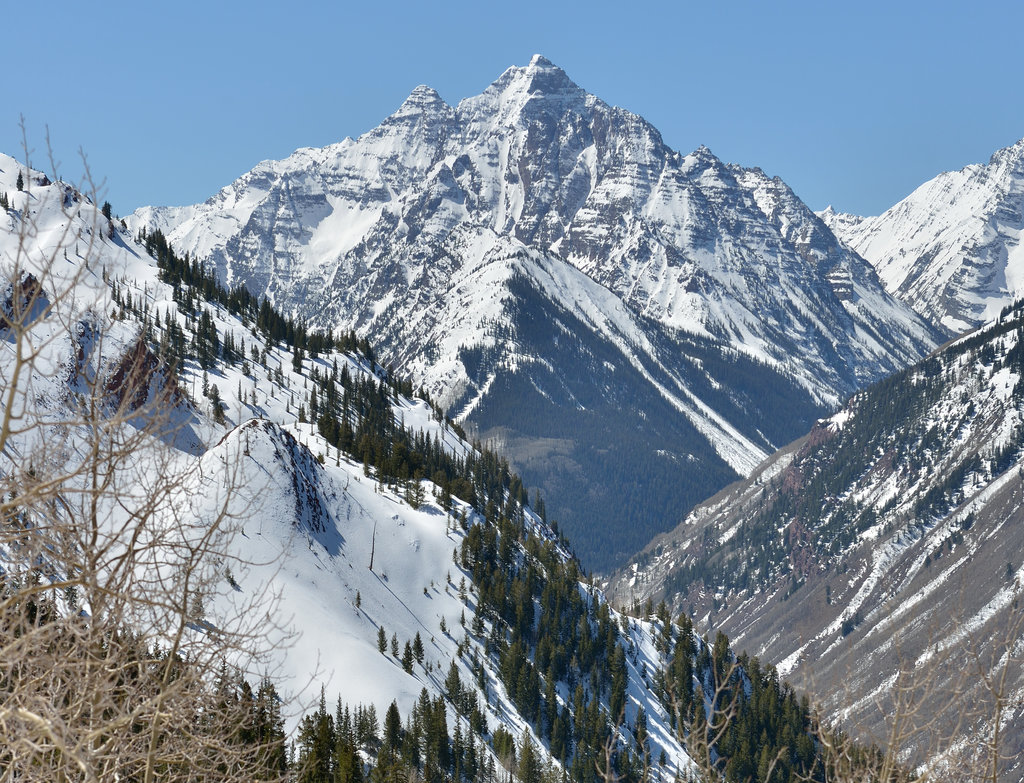