There are 5 named mountains in Redwood National Park. Coyote Peak is the highest point. The most prominent mountain is Rodgers Peak.

Some of the oldest and largest living things on earth live along the coast of northern California. Redwood National and State Parks is a complex of both state and national parks. Together, Redwood National Park and Del Norte Coast, Jedediah Smith, and Prairie Creek Redwoods State Parks span 139,000 acres and protect 45% of all remaining coastal redwood old-growth forests.

Redwood trees have been around for over 200 million years and can grow to over 300 feet tall. Today, there are approximately 50 redwood trees living along the Pacific Coast that reach heights of over 360 feet.

So, it’s understandable that the park’s notoriety comes from protecting the world’s most impressive tree species. However, the park also serves as a sanctuary to a variety of other indigenous flora and fauna, vast prairies, wild river-ways, and 37 miles of rugged coastline. 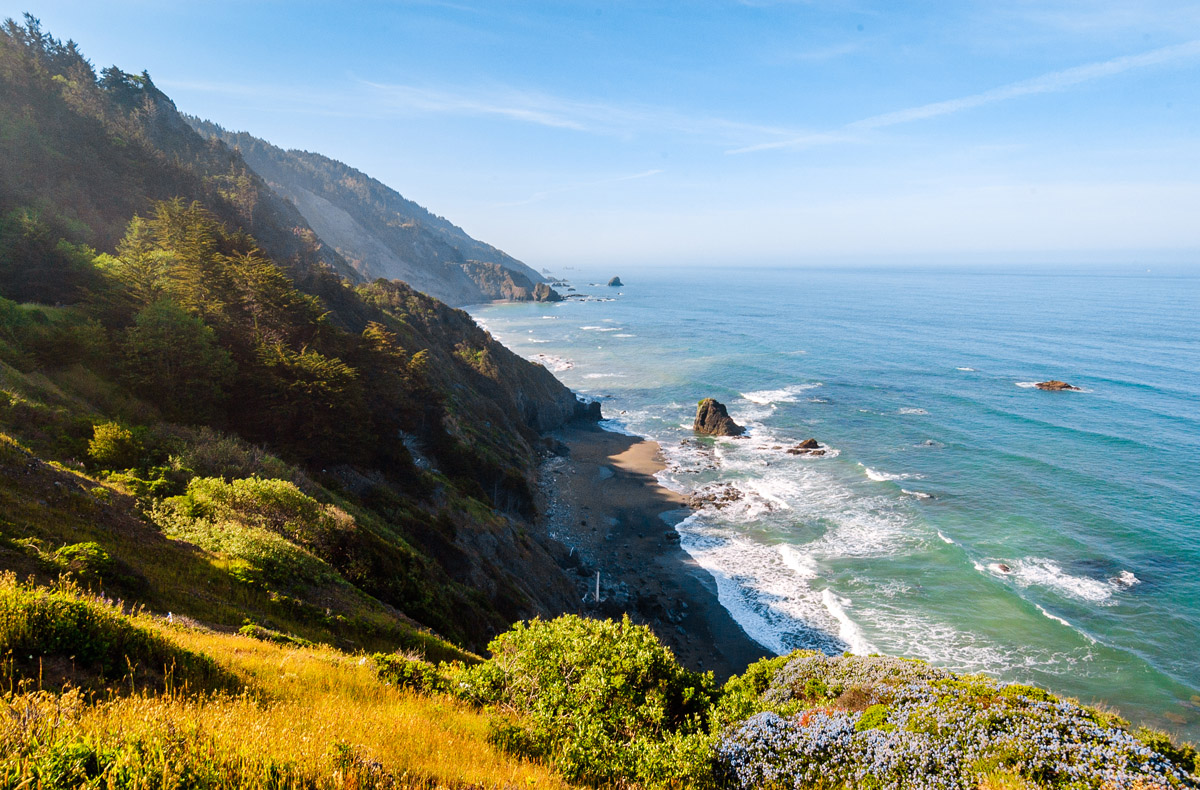 Remarkably, in 1850, there were over 2 million acres of old growth redwood forest in California. In 1968, when the national park was established, the redwood population had decreased by 90% due to commercial logging. The northern portion of the area, which was originally inhabited by Native Americans, attracted lumbermen and, when miners failed to strike it rich during the gold rush, they often turned to harvesting redwood trees.

In 1994, the state parks and national park were administratively combined to save the redwood forests and protect threatened animal species like the tidewater goby, Chinook salmon, northern spotted owl, and Stellars sea lion. Today, the parks form a World Heritage Site and are part of the California Coast Range Biosphere Reserve, a form of worldwide acknowledgement of the parks’ incredible natural resources.

More than 1.5 million people visit the Redwoods annually to stand and stare in awe at these giants. Fans of Hollywood films delight in learning that this beloved park has been featured in several films including scenes for Star Wars and Jurassic Park. The park also contains several famous drive-thru trees including the Klamath Tour Thru Tree, Myers Flat Shrine Tree, and Leggett Chandelier Tree.

The park contains almost 200 miles of hiking trails, a few of which are catered to horseback riding and mountain biking. Kayaking, canoeing, fishing, and backpacking are also popular activities in the park. There are several historic structures, including an early warning radar station from WWII, gold mining sites and footpaths, and several fish hatcheries constructed from 1871 to 1946.

One of the most iconic hiking trails in the parks, the James Irvine trail wanders along hillsides and ridges through 10 miles of old-growth redwoods. The trail highlights ancient redwoods, some of which reach 18 feet in diameter, before connecting with the Fern Canyon hike. At Fern Canyon, you can either turn around and hike back the way you came or follow the beach and return via the Miners’ Ridge Trail.

The Boy Scout Tree Trail is a 5.5-mile out-and-back trek through the pristine old-growth redwood forest found within Jedediah Smith Redwoods State Park. The trail takes you deep into the woods and beneath the canopy of the park’s beloved giants. Hikers can expect sections of pure redwoods, as well as mixed forest. At the end of the footpath, a small spur trail leads to the Boy Scout Tree, a giant double tree that was named after a local troop leader.

You don’t have to look far for tall trees, particularly on the Tall Trees Grove trail. Located in the heart of Redwood National Park, the Tall Trees Grove trail is a remote footpath that leaves to a forest filled with moss-covered maples, Rhododendrons, and, of course, giant redwood trees. Although this trek doesn’t feature the tallest trees in the park, it was featured in a famous 1963 National Geographic Magazine article that helped publicize the creation of the national park.

Lyons Ranch is a National Historic Site in a rarely visited area. It is located in a remote section of the park called Bald Hills, near the park’s southeast border. Lyons Ranch Trail features wide open meadows, spectacular views, and pioneer-era barns. The highest point in the park Coyote Peak and a little bit lower yet more scenic Schoolhouse Peak are located nearby.

Most visitors to the Redwoods opt to stay in small nearby towns like Eureka, Orick, Redcrest, Trinidad, and Klamath. Accommodations range from motels and historic inns to yurts and cabins.

Popular accommodations include the Lost Whale Inn, a waterfront B&B in Trinidad, the View Crest Lodge, rustic cottages just outside of the parks, and the Trinidad Bay Bed and Breakfast. 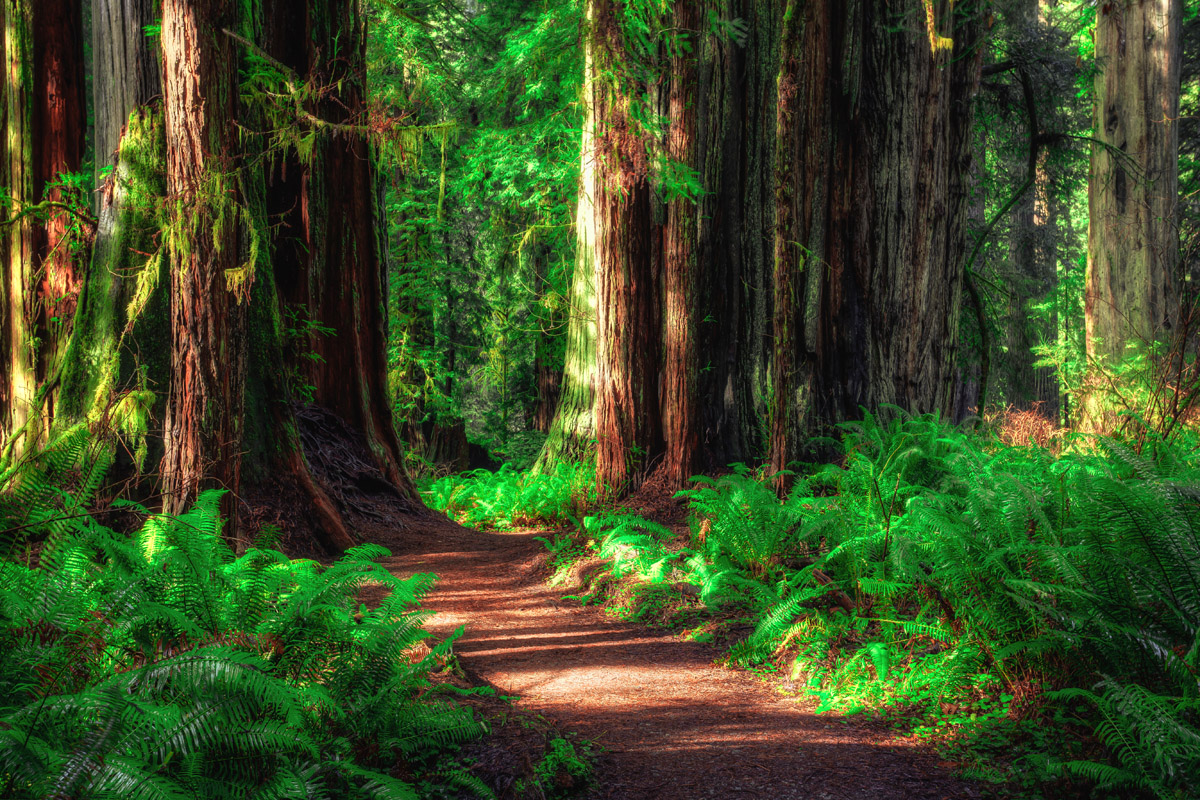 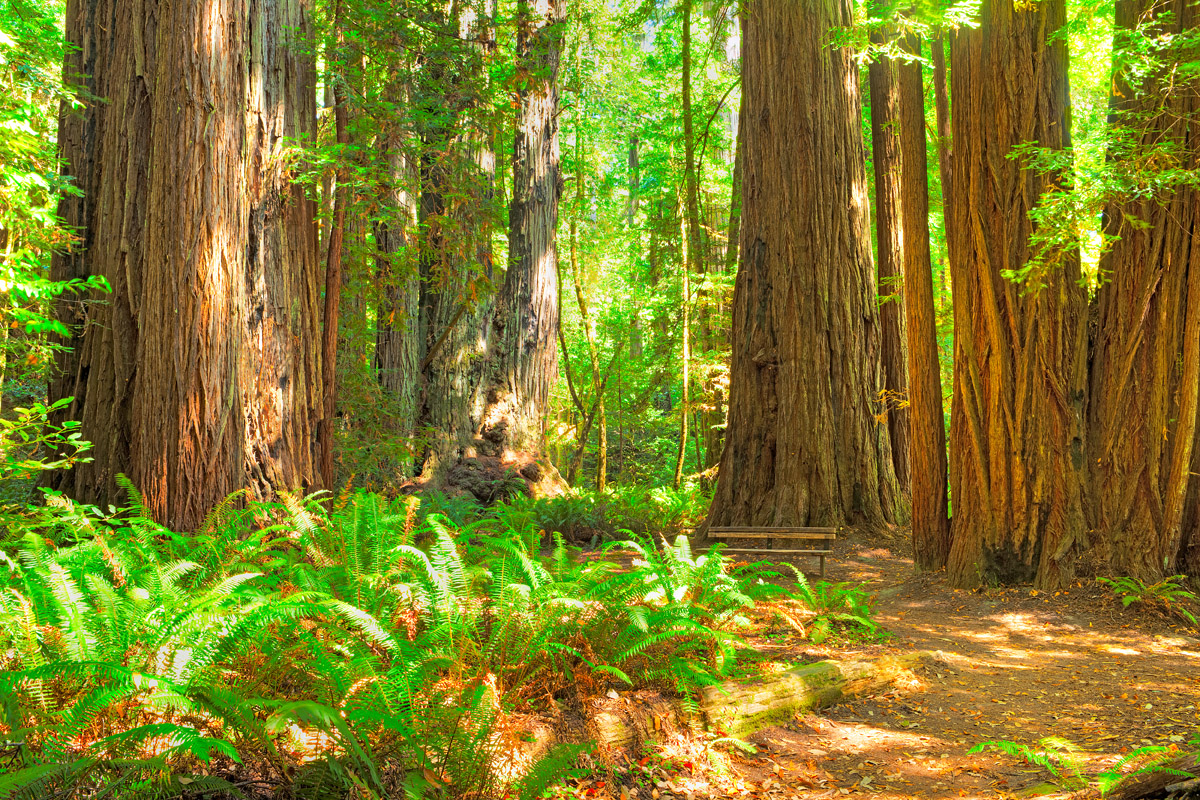