Psiloritis
1
Mountains with prominence of 1 ⁠500 ⁠m / 4 ⁠921 ⁠ft or more.
Highpoint

In the heart of Crete is Psiloritis, a massif of great cultural significance that has been protected as a geopark in Greece since 2001. On the massif are 6 named peaks, with the tallest and most prominent being the eponymous peak of Psiloritis at 2,456 m (8,058 ft). The second tallest peak is Mount Agathias, taking its name from the Greek word for “good,” which stands at 2,424 m (7,953 ft) in elevation. 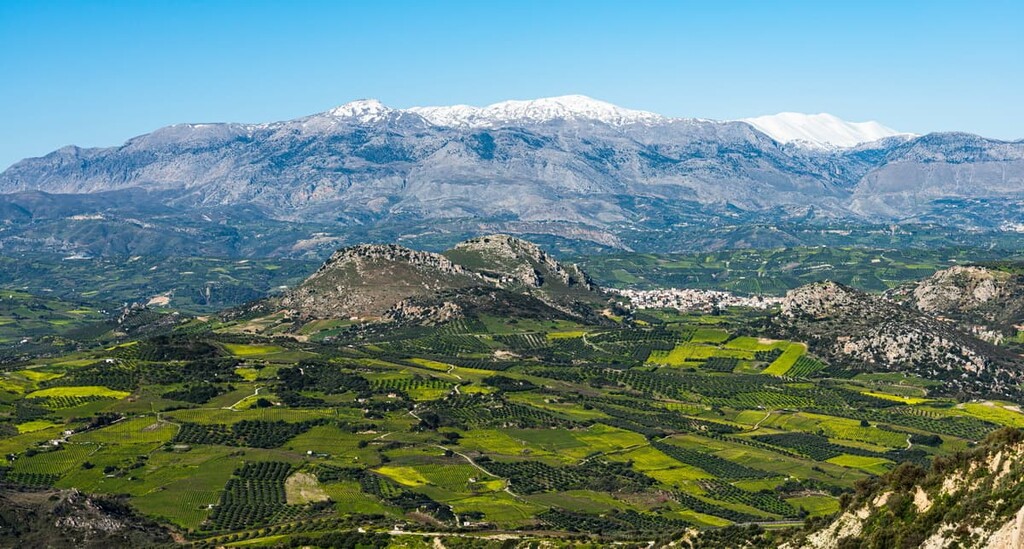 Psiloritis is located nearly in the exact middle of the Greek island of Crete. More specifically, it is located on the eastern edge of the Rethymno regional unit and it stretches into the Heraklion regional unit.

When referring to the mountain, Psiloritis and Mount Ida appear to be interchangeable terms, though Psiloritis can also be used to refer to Psiloritis Natural Park, which encapsulates the mountain and surrounding area.

The peak of Psiloritis is not just the highest on the mountain but the highest in all of Crete, and its summit overlooks the Aegean Sea to its north, and the Libyan Sea to its south. In the east is the vast, grassy Nida plateau, near which is the Idaean Cave, which is one of many karst caves to be etched into the mountainous landscape. Alongside plateaus and caves, the mountain is home to all sorts of small valleys, coombs, and gorges.

Outside of Nida, eastern Psiloritis can be more rugged in its terrain, with vertical cliffs descending in the Heraklion lowlands or Amari valley and rivers like the Amarianos, Platis, Geropotapos, and Koutsolidis that wind their way through these gorges, as well as many smaller streams.

Northern and western Psiloritis, however, has a less extreme topography that is more suitable to larger pastures, agricultural operations, and settlements. Indeed, such pastoral landscapes have existed and, to some extent, still do exist in the eastern and southern parts of the massif, too.

The climate of the massif, as it is located on a narrow island, is of a moderate Mediterannean nature, with mild, wet winters (December and January see the most precipitation) and warm, dry, breezy summers when sunshine is common. Of course, temperatures tend to get cooler with the rise in elevation, and the snow atop the mountain peaks is present nearly year-round.

The convergence of the African and European continental plates several million years ago sent packed sediments on the long-gone Tethys Sea floor upwards, forming Crete and, with it, what is known today as the Psiloritis mountain. Today, the remnants of the Tethys Sea can be seen in various ophiolite formations, ophiolites being pieces of oceanic crust uplifted onto the earth.

The karstic nature of the Psiloritis landscape, made up primarily of limestone, dolomite, and marble, lends itself to a rich assortment of geological features, rock formations, landforms, and visible geological folds. Dissolved and eroded karst complexes can be found throughout the mountains, resulting in cavities and depressions like sinkholes, dolines, and caves, and a smattering of vast plateaus.

Perhaps the most famous plateau is the Nida plateau, a type of polje—a flat karstic plain—formed from years of erosion. Around the plateau, against the mountain’s eastern slopes, is a large fault that allowed for these erosive conditions and, as well, is the location of the Idaean Cave.

Adjacent to Psiloritis is the strange and almost alien-seeming landscape of the Petradolakia area, appearing almost like a different planet with its hilly outcrops of limestone and dolomite, visibly folded and pockmarked by craters and dolines. In some locations are concentrations of white silica, suggested to be the result of prehistoric sponges left over from the Tethys Sea.

There is also a fault near the Agios Fanourios chapel that separates metamorphosed and non-metamorphosed rocks, in which a spring has formed as a result of impermeable metaflysch trapping rainwater. Metaflysch can be seen in great quantities near the Minoan settlement of Zominthos.

As part of Crete, the main ecoregion of Psiloritis is the Crete Mediterranean forest, a Mediterranean forest, woodlands, and scrub biome with great diversity that varies based on elevation and geographical landscape. There is a high degree of Cretan endemism among Psiloritis’ plant species, with many more being otherwise rare or unique in their own right.

Kermes oaks are particularly abundant in Psiloritis. They are present in various forests and gorges throughout the massif. Cypresses, hollies, maples, and pines are also particularly prevalent in the mountain’s lush forests.

The lower banks of the mountains are alive with color and scent from their many blooming flowers and aromatic herbs, particularly during the warmer months. Sages, thymes, tulips, cyclamens, dragon lilies, burnets, and orchids contribute to this wonderfully vibrant medley of sight and smell.

In terms of fauna, Psiloritis is home to hundreds of species of birds that find the mountains suitable for nesting, mating, and hunting. Some notable species include the massive and rare bearded vulture, the carrion buzzard, the kestrel, Bonelli’s eagle, the haggard, and the lanneret, to name a few.

There are three amphibians one is likely to see in Psiloritis, namely the Cretan tree frog, Cretan water frog, and the green toad. Snakes and lizards may also be found in the massif.

The presence of mammals is mainly limited to smaller mammals like the Cretan shrew and spiny mouse, though it is believed a small population of the contentious Cretan wildcat may live among the mountains. There are also large colonies of bats tucked inside the various caverns of Psiloritis.

The area in and around Psiloritis has been inhabited by humans at least since the time of the Minoans, with permanent settlement believed to stretch back to around 2,000 years ago. Of particular note is the Zominthos settlement located in Psiloritis’ northern foothills, a plateau on which the remnants of big Minoan buildings—with frescoes, ceramics workshops, and palatial adornments—can be seen today.

This settlement was abandoned after an earthquake, but the general Psiloritis region would not lose meaning, even as Minoan civilization seemed to crumble during the Greek Dark Ages towards the end of the second millennium BCE. The Idaean Cave was a site of particular significance, both for the Minoans and for the later post-Dark Age Greeks who settled Crete.

This deep cavern was long a place of worship, owing to a legend that it was where Zeus, as a baby, was hidden from his father, Kronos. Kronos had eaten his previous children to thwart a prophecy that claimed he would be overthrown by his progeny, and Zeus’ mother, Rhea, fearful of this, gave birth to Zeus in secret and hid him away in the Idaean Cave (alternatively, it is believed Rhea gave birth to Zeus within the cave itself).

Great quantities of votive offerings and sacrifices have been found within this site, and there is some belief that it may have also been the location of an oracle due to an apparent tripod motif seen on nearby coinage, as tripods were the seat upon which oracles sat.

During history, there have been communities, agricultural operations, and timber operations, among the grassy plateaus and forests of Psiloritis, with some continuing to this day, and old Byzantine chapels and stone houses that still stand scattered throughout the mountains. In modern history, Psiloritis was notable as a meeting place and shelter for Greek resistance fighters battling against the Nazis in World War II.

Hiking up the summit of Psiloritis is a popular adventure for people who want the chance to see Crete from its highest point, in all its glory. Crete’s end-to-end E4 trekking trail conveniently runs up to and over the summit, with two main options for hiking the peak on either side.

You could start from the Nida Plateau, with a marked trail leading from the Idaean Cave to the top of the mountain in a journey that should take around 3 hours, unless you opt to start further out along E4.

Alternatively, you could start in the west from the village of Fourfouras. The ascent from this side is more dramatic at an increase of around 2,000 m (6,562 ft), resulting in around a 5 to 6 hour trip up to the summit and a 3 to 4 hour trip down, unless you choose to continue along E4.

There are a few other trails that lead up Psiloritis, with one recommended one beginning at the Mygero refuge in the northeast of the peak. The trail is about 4.3 km (2.7 mi) one-way with an ascent of around 900 m (2,953 ft) and scenic views of Crete along the way.

The E4 can also be used to scale the summit of Mount Agathias and, generally, to wind one’s way through the landscape on an extended journey.

The immediate vicinity of Psiloritis is home solely to towns and smaller villages, with hostels and refuges scattered throughout. However, there are some larger towns and major Cretan cities fairly close by, namely those of Heraklion and Rethymno.

The urban heart of Crete, located about 60 km (37 mi) from Psiloritis, is its capital and largest city of Heraklion, with over 200,000 residents. This coastal city is particularly famous for its proximity to the palace of Knossos, one of the most stunning archaeological sites in all of Greece, which the Minoan civilization once thrived.

History runs through the veins of the city itself, with a historic city center, old town, and a plethora of historic squares, often dimpled by Venetian fountains and Greek statues, and surrounded by the stone walls of old Venetian fortifications. Further, there are plenty of museums that retell this great and vast Cretan history in rich detail.

Otherwise, squares like the Lions Square, Kornarou Square, and Freedom Square, and famous streets like Klaokairinou, Talos Plaza, and Daidalou are host to all sorts of cafés, bars, restaurants, nightclubs, boutiques, and markets, both modern and traditional in nature.

Heraklion International Airport is the second busiest airport of Greece and one of the easiest ways to reach Crete, though there are ferries from Piraeus on the mainland as well. The city is staffed by bus lines, which also reach to nearby destinations and can be used to get to Psiloritis, though driving or a taxi service may be preferable for some.

About 57 km (35 mi) from Heraklion is another notable coastal city, Rethymno, the capital of its namesake regional unit. Rethymno, which is home to around 35,000 people, has been active as an urban settlement since the time of the Minoans, and it maintains a beautifully antique appearance to its architecture and streets to this today.

Many of its buildings are Venetian or date back to its time as the seat of a Latin Diocese, giving it a unique appearance with its narrow stone-lined streets, arched doors and passageways, and sun-soaked pastel colors. The Venetian Fortezza of Rethymno is a wonderfully preserved stone castle and one of its major landmarks, alongside the Venetian Harbor, Great Gate, Neratze Mosque, and Megalos Antonios church.

It is also close to a pristine beach right outside the Old Town, which is worth visiting and/or staying in for its lively neighborhoods of bars, cafés, shops, and restaurants, and local markets sell all sorts of unique local goods and foods. The city is also home to a wine festival every July, a popular event not just for the wine but for the music and dancing too.

Rethymno can be reached by bus from either Heraklion or Chania, and there are buses and taxis that can transport you to and from Psiloritis. 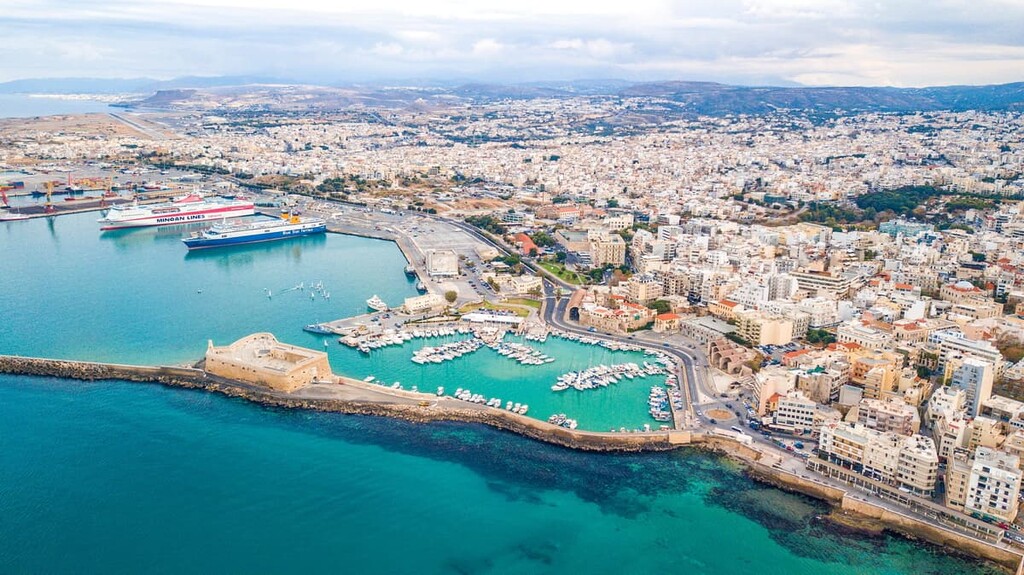 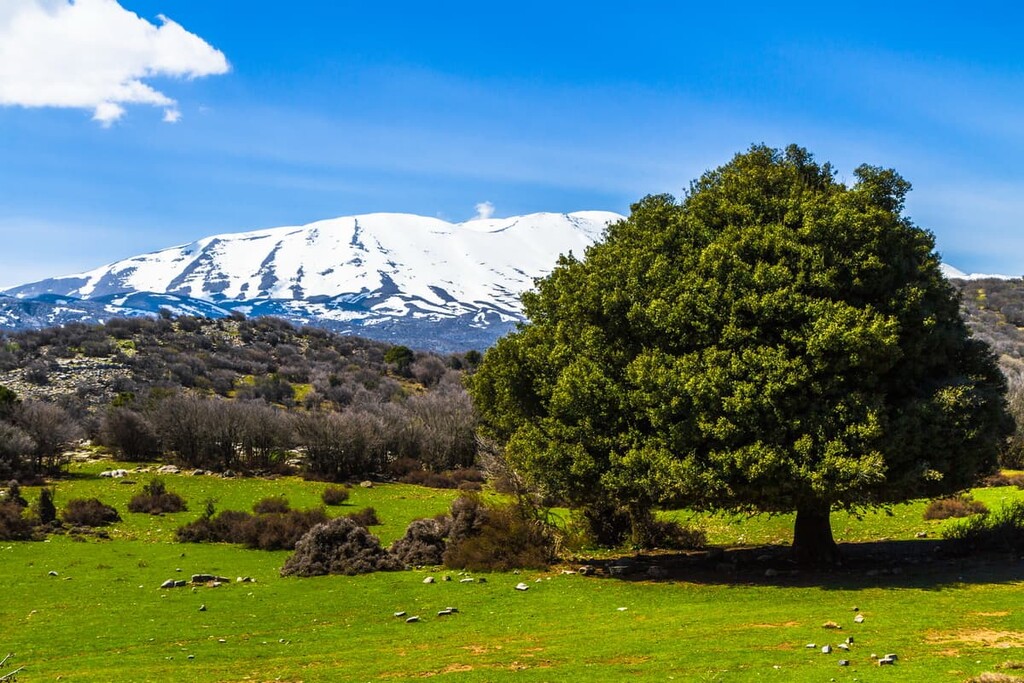 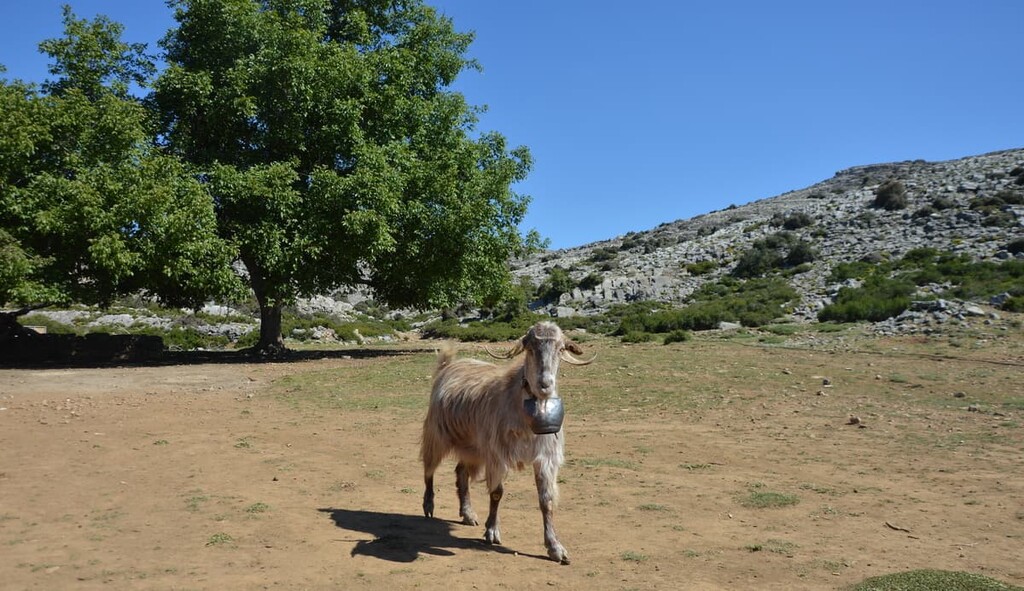 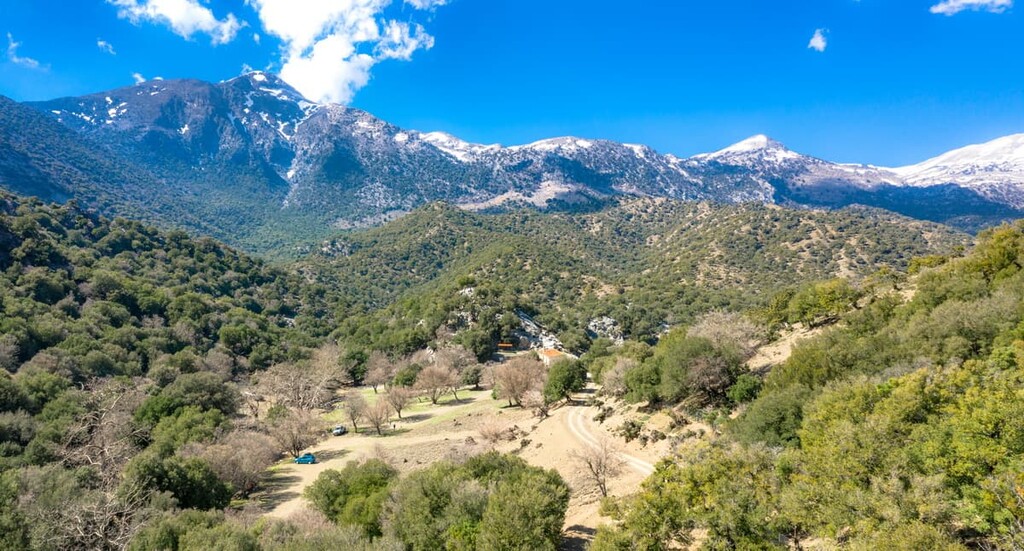 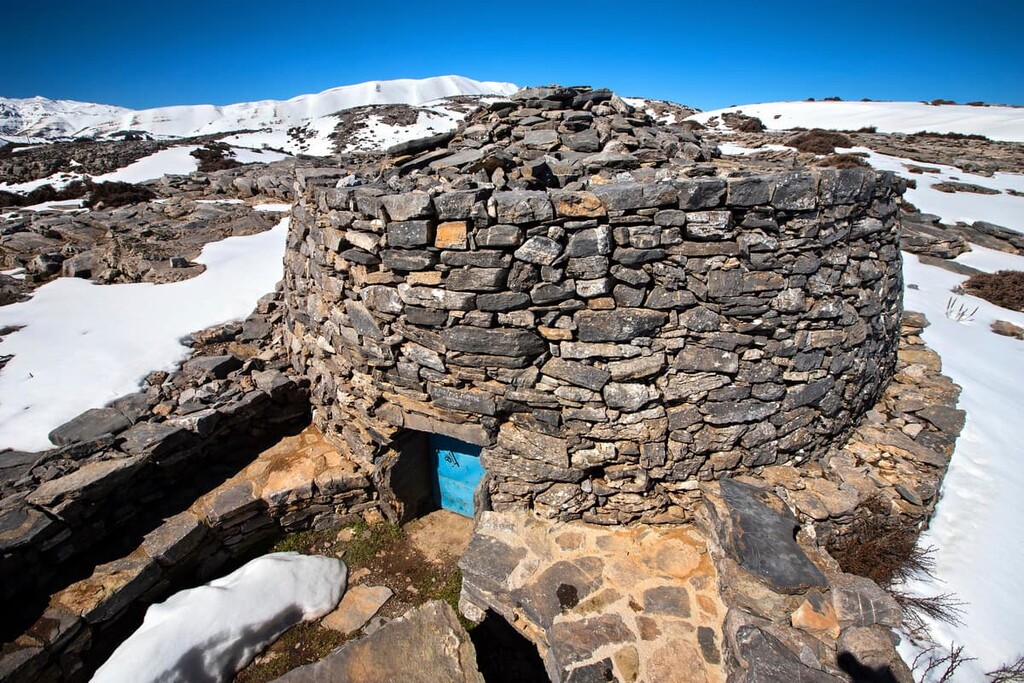 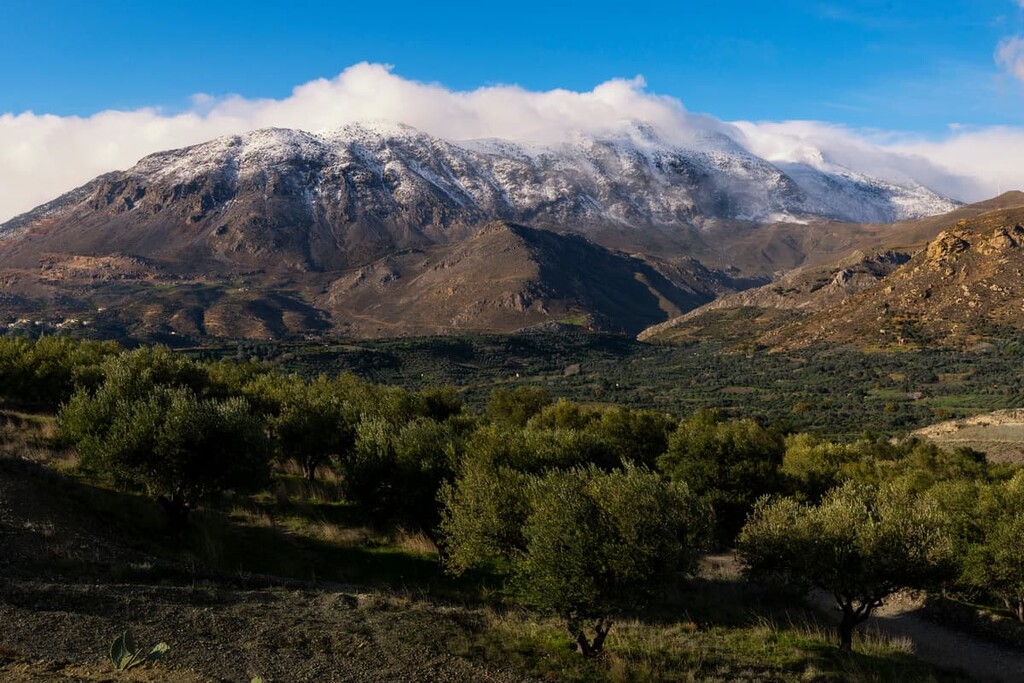