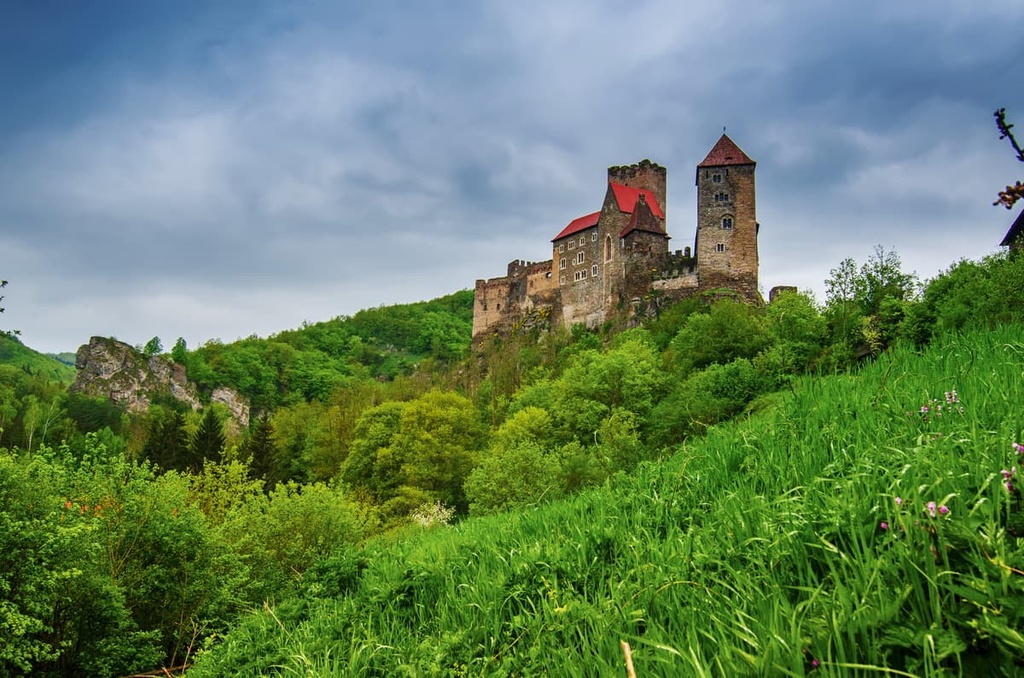 The 13.3 sq. km (5 sq. mi) Thayatal National Park is located in the northeastern part of Austria in the state of Lower Austria along the country’s border with the Czech Republic.

It is situated directly across the border from the Czech Národní Park Podyjí. Thanks to its steep hillside forests, the national park features one of the most stunning gorge valleys in Austria.

Located in the national park is the town of Hardegg and its historic castle, Burg Hardegg. You can actually walk to Národní Park Podyjí in Czechia from Hardegg by crossing over the bridge that traverses the river Thaya.

The impressive Umlaufberg, the 378 m (1,167 ft) most prominent peak in the national park, is almost surrounded by the river Thaya. It offers its visitor a fantastic view of the surrounding forests and meadows and, on the other hand, it is teeming with life.

Thayatal National Park is home to a diversity of plant and animal species. In fact, despite its small size, the park is home to many endangered species such as the European wildcat and the black stork. This is because the park is situated along a climatic boundary between the Alps to the southwest and the more continental climate to the north.

In the west and on the more shady northern slopes of the park, beech forest communities dominate the landscape. In the eastern part of the park, you can find oak forests, particularly on warm, dry south-facing slopes.

Visitors can also find sycamore elms here in addition to common beech. Other plants found in this part of the park include martagon lily, daphne, sorrel, onion toothroot, and single-flowered pearl grass.

The park is home to many interesting animal species, including:

The area in and around what is now Thayatal National Park has been home to humans for thousands of years.

Archaeological evidence suggests that humans have lived in what is now Lower Austria since at least the early Stone Age, if not earlier. The region was also once part of a Celtic kingdom before it became part of the Roman Empire as a province called Noricum.

After the fall of the Roman Empire, the region was primarily home to a Germanic people called the Bavarii, who lived throughout the region until the Frankish Empire took control around the start of the ninth century.

From about the tenth to twelfth centuries, the region was ruled as part of the Margraviate of Austria. During this time, around 1145, Hardegg Castle was built in what’s now the nearby town of Hardegg. The castle was later acquired by the Counts of Plain and the town around the castle was established shortly thereafter.

However, the region saw substantial fighting during the Hussite Wars in the 1400s due to its proximity to the Kingdom of Bohemia. The region was later bequeathed to the archdukes of Austria.

During his rule, Maximilian I, Holy Roman Emperor, gave Hardegg to the Prueschenk family and gave them the title of Counts of Hardegg. Nevertheless, the castle itself started to decay and it fell into a state of disrepair until it was rebuilt in the nineteenth century.

After World War I, the region that is now Thayatal National Park was located along the border of the First Austrian Republic and the newly formed Czechoslovakia. During World War II, the entirety of the area on both the contemporary Czech and Austrian sides of the border was part of the Nazi-controlled Reichsgau Niederdonau.

Hardegg Castle in the Thayatal Valley

A decade after the Second World War ended, the land to the south of what is now the Czech Republic became part of the independent sovereign state of Austria.

In 1984, plans surfaced that a power plant was to be built on the Czech side of the Thaya. Citizens' initiatives and protests by the city of Hardegg successfully prevented this project.

In 1988 and 1991, the areas to the north and south of the Thaya River were declared nature reserves.

The area along the river in Lower Austria was first placed under nature protection by the state government in 1991 though it didn’t achieve national park status until 1997. Podyjí National Park in the South Moravian Region of Czechia was created a few years later in 1988.

Even though Thayatal is the smallest national park in Austria, it features several hiking trails that give visitors an excellent opportunity to explore the region’s many meadows and forests. Here are some of the best hikes to check out on your next trip to the park.

A memorable hike that takes you to see some of the highlights of the Tayatal region is the Thayatalweg 630. This approximately 181 km (112 mi) long hiking trail stretches from Nebelstein to Retz and has a lot to offer for visitors, including excellent views of the entire region.

The Einsiedlerweg & Wildkatzenweg trail is ideal for families with children. There are many exciting things to discover on this trail, from the national park house to the hermit cave on the Thaya.

This hike also rewards visitors with picturesque views of the Thaya and the mighty Hardegg Castle. This hike will take around 1.5 hours to complete and is 5.9 km (3.7 mi) long.

The Hardegger Circle Trail is a short loop that leads through the town of Hardegg and steeply over the Regina rock to the Maxplateau. From there, you can enjoy a fantastic view of the city lying in the valley below. This 4 km (2.4 mi) hike is relatively casual and it takes about 1 hour to complete.

The Hike Retz - Znojmo/Znaim Trail connects the sister cities of Retz and Znojmo. It leads through hilly vineyards, past houses that are steeped in history and cultural monuments, through gnarled forests along the river, and over picturesque vantage points such as the Holy Stone.

This hike is approximately 20 km (12.4 mi) long and it takes most people about 6.5 hours to complete.

In addition to the impressive national park with its beautiful landscape, the area around Thayatal features many other excellent destinations that are worth checking out during your next visit to the region. Here are some of the best attractions around Thayatal National Park to add to your travel itinerary.

The Ruins of Kaja

The more than 800-year-old Kaja Fortress stands proudly near Thayatal National Park. Nowadays, the fortress is technically partially in ruins, but it offers excellent views of the region.

In the castle courtyard, visitors can take a seat under a centuries-old linden tree and enjoy refreshments. There are also special exhibitions about the castle's history that you can check out at Kaja, including an armory, a knights' hall, a chapel, and a dungeon.

The nearby Bergwerkssee Langau is a natural lake with a large, family-friendly lawn, a children's paddling pool, a playground, and a beach volleyball court. At the lake, you can also enjoy surfing, boating, and water skiing during the summer months.

The nearby Geras Nature Park offers visitors an excellent opportunity to spot wildlife. It is home to an abundance of animals, including mouflons and a variety of different deer species.

Furthermore, the reserve features a petting zoo, which is particularly great for children who want to learn more about the region’s natural history. Within the reserve, there are also many different hiking trails that are perfect for families with young children.

Looking for a place to stay near Thayatal National Park? Here are some of the best cities and towns to check out in the region.

Hardegg—one of the smallest towns in Austria—lies in the middle of the Thaya River along the Austrian-Czech border. Like the surrounding nature of Thayatal National Park, Hardegg also offers surprises and treasures for visitors to enjoy.

The town’s major landmark, Hardegg Castle, hovers majestically over the middle of the narrow Thaya valley and is definitely worth a visit. There are also plenty of excellent shops and restaurants to venture into during your trip to Hardegg.

Raabs an der Thaya is considered to be one of the modern gateways to Thayatal National Park. It was initially built at the crossroads of old trading routes as it is located at the confluence of the German and Moravian tributaries to the Thaya.

The town itself features quaint old streets with plenty of shops and restaurants to check out. Additionally, you can head to see the Kollmitz ruins, which are considered to be one of the most extensive ruins in all of Austria. The ruins are easily accessible via a well-marked hiking trail that takes about an hour to complete.

Vienna, the capital of Austria, is famous for its music, architecture, art, and rich culture. It is also home to some of Austria's most notable universities and museums, so it’s a must-visit for any trip to the country.

Vienna is very easy to get to from around the world thanks to the Vienna International Airport. The city is located about 1 hour and 20 minutes away by road from Thayatal National Park. You can also travel to the park from Vienna using public transportation, though this can be quite complicated. 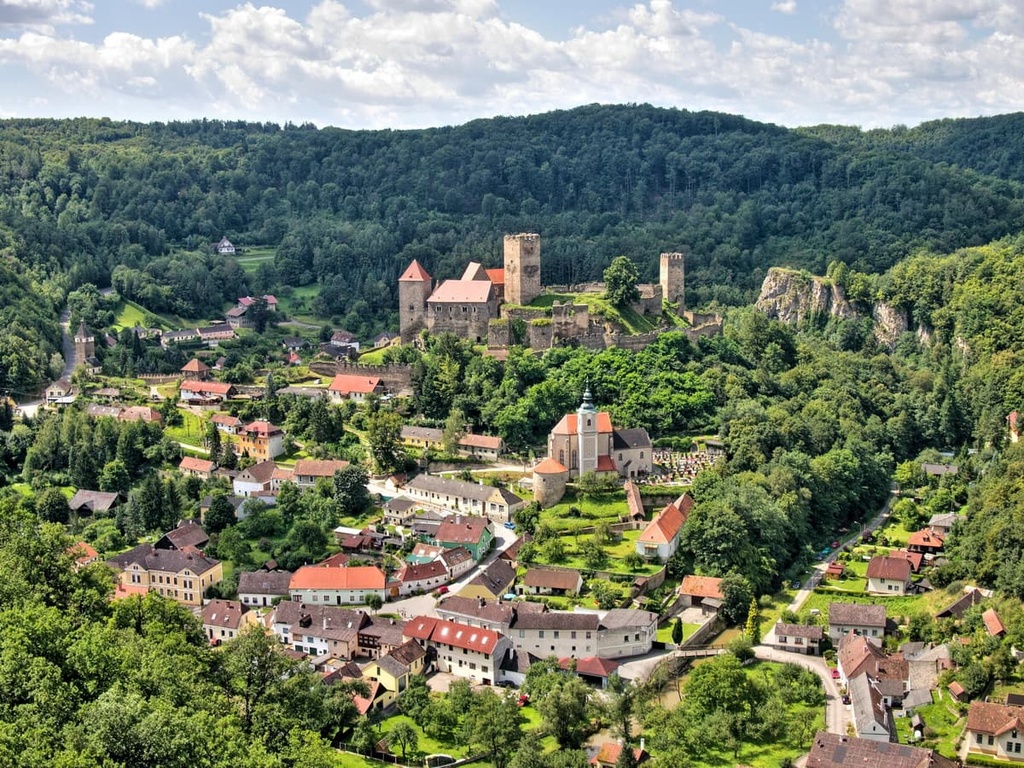 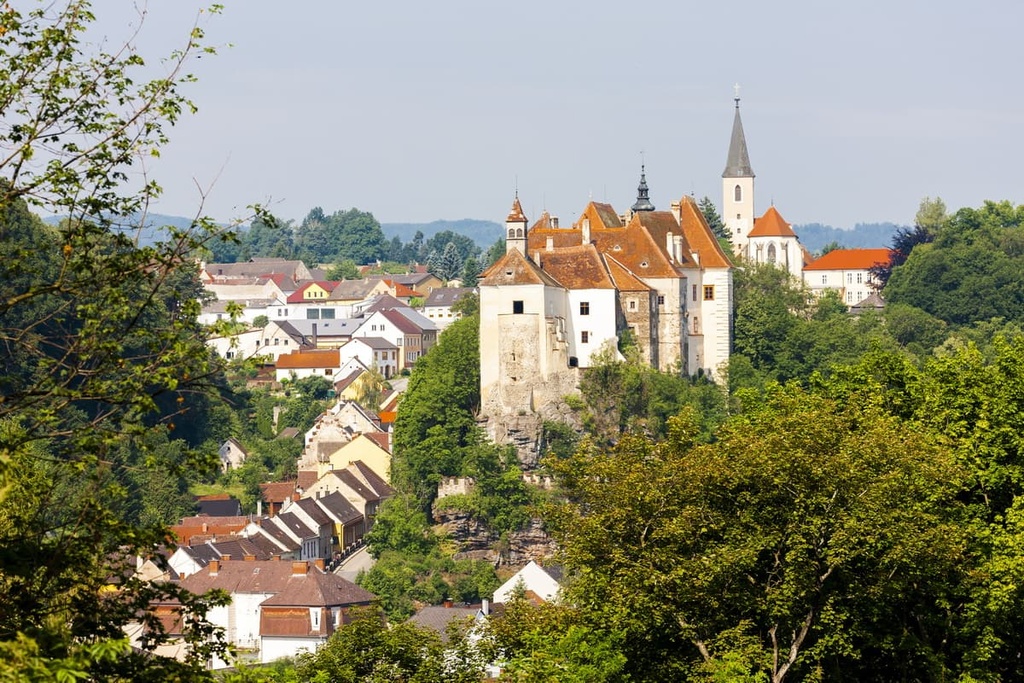 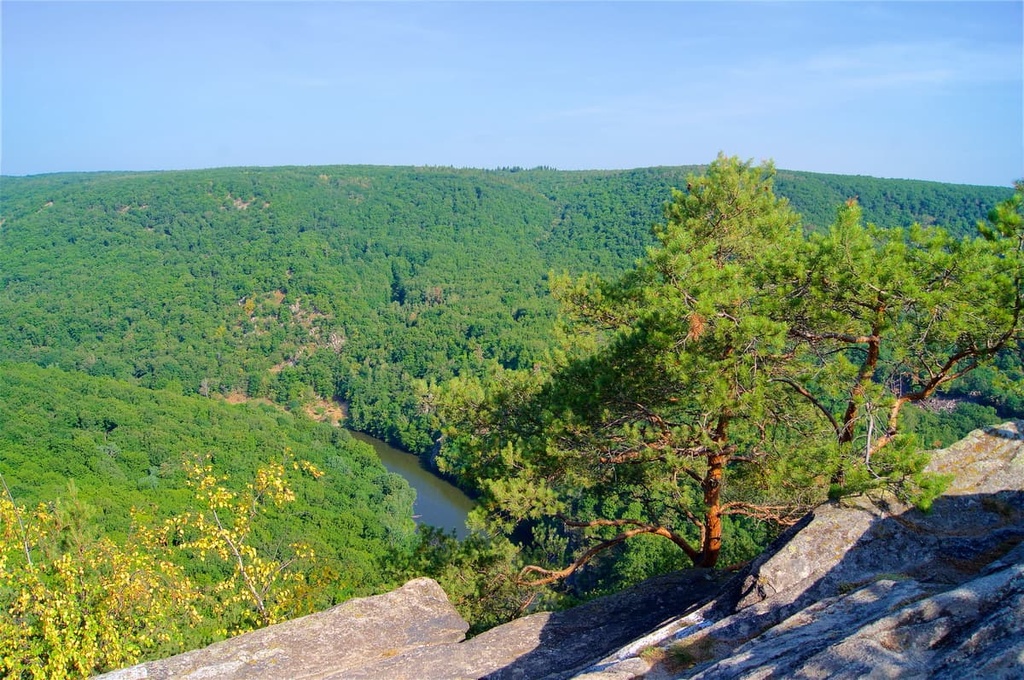 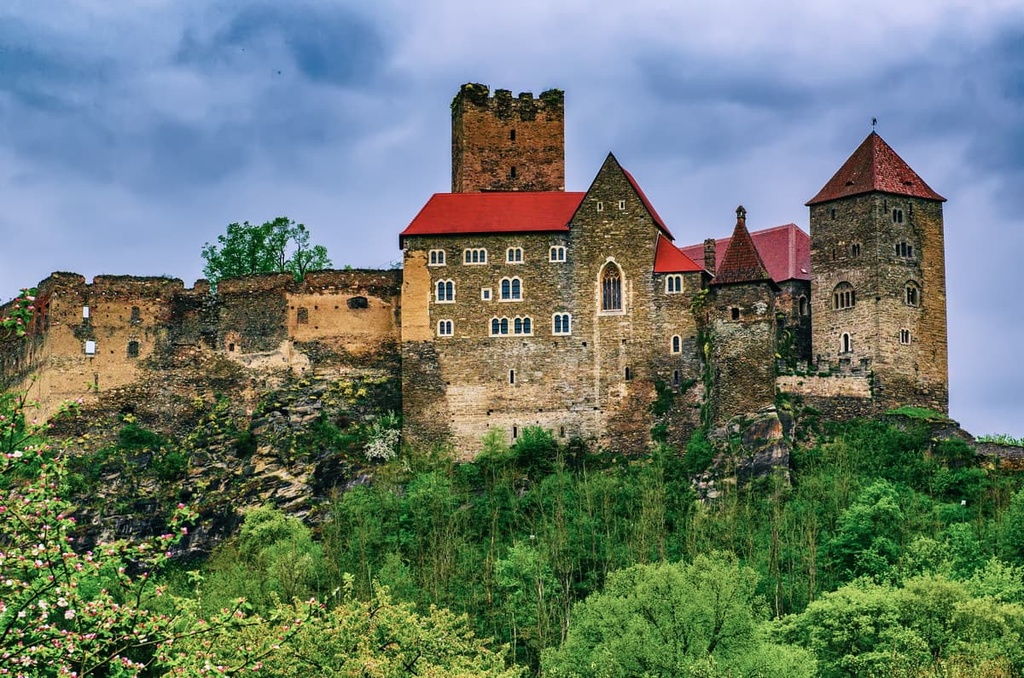 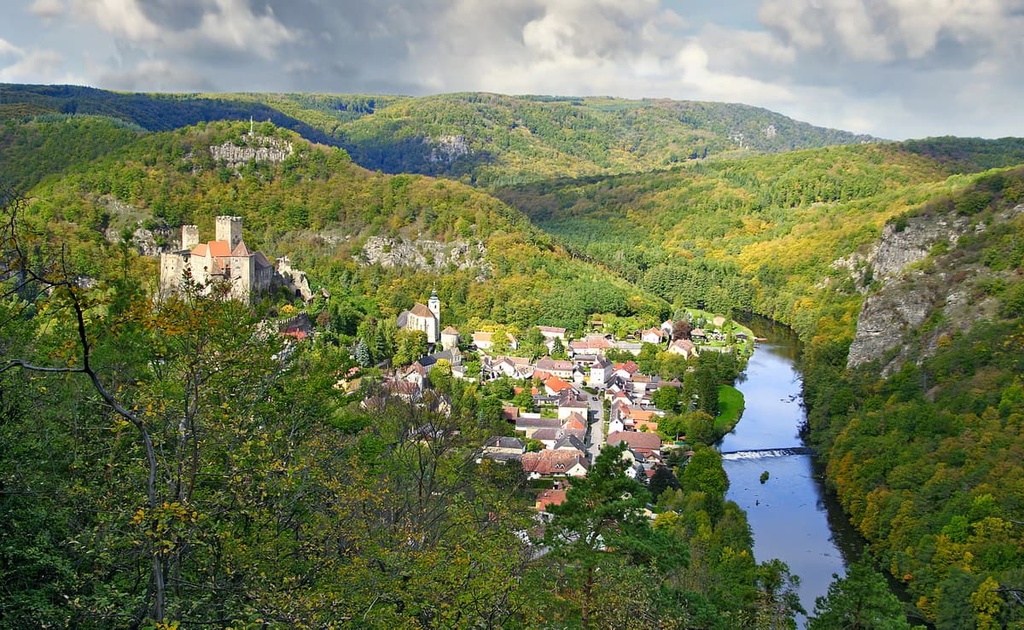 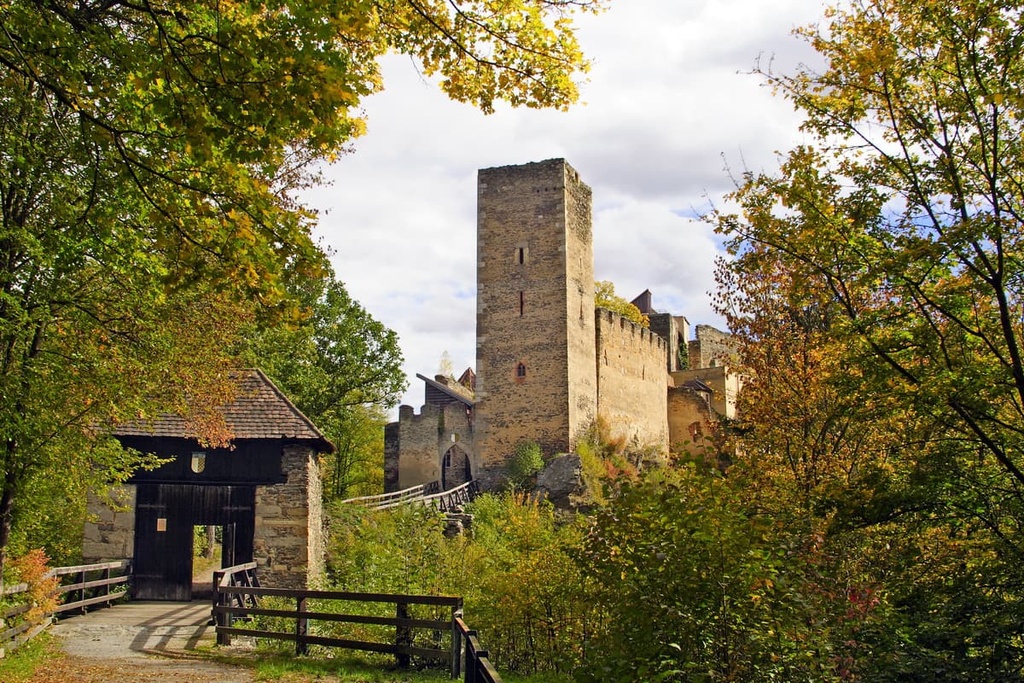 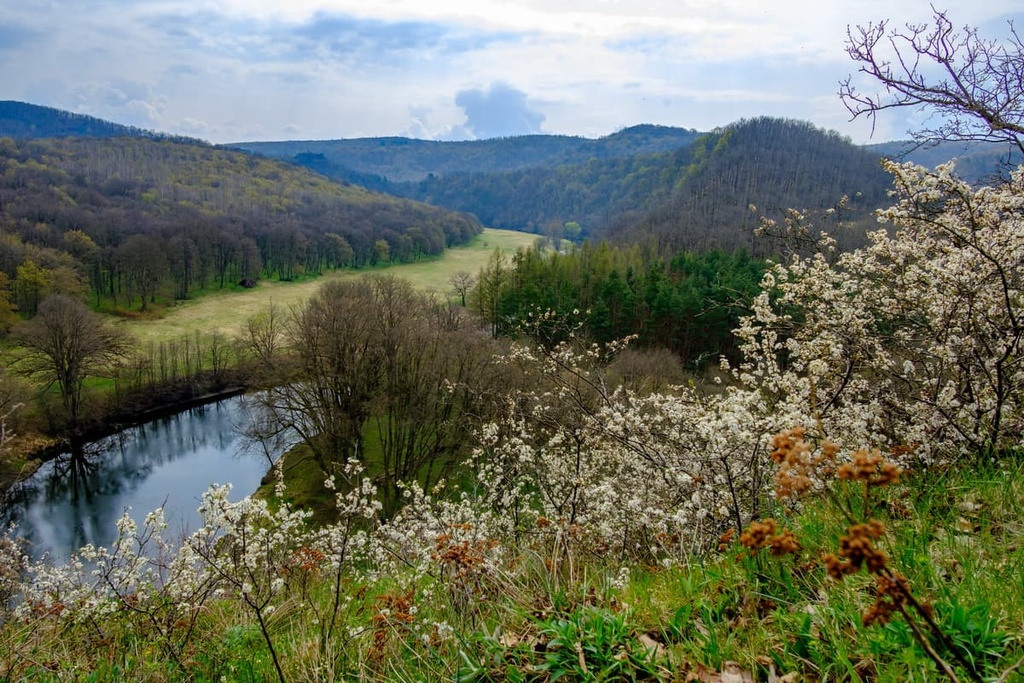