Ainos National Park, designated by the Greek government in 1962 to protect the beauty and endemic wildlife of its namesake mountain, is a shining example of the nature and mountains that Kefalonia has to offer. With great fir forests, roaming horses, and endless views of the great Ionian Sea, the park boasts a truly magical landscape. Of the 4 named mountains in the park, the tallest and most prominent is Mount Ainos, standing at 1,628 m (5,341 ft) in elevation. 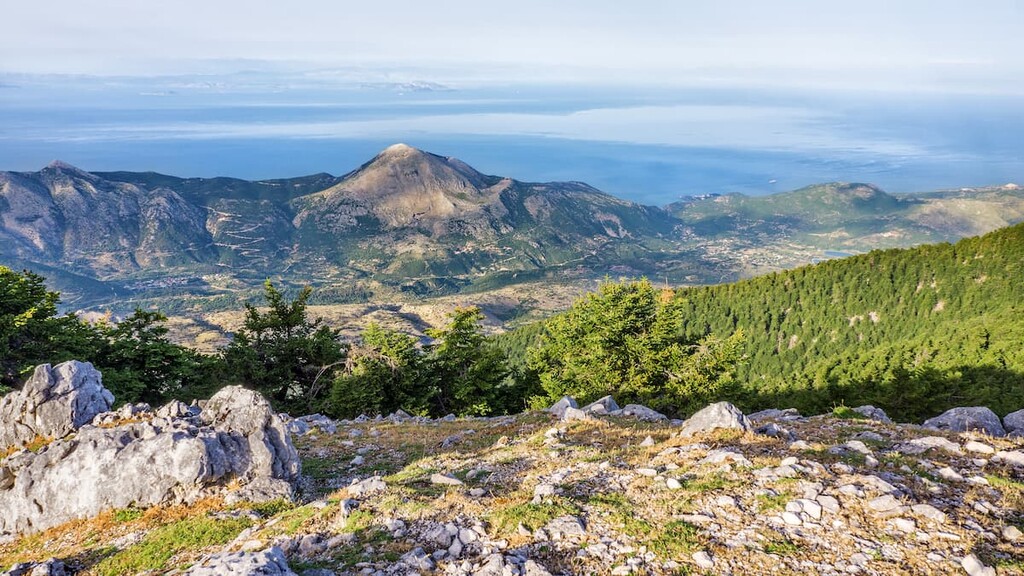 Ainos National Park resides on the island of Kefalonia (or Cephalonia), the largest of the Ionian island cluster in southwestern Greece, and the sixth largest island in the country. Kefalonia comprises its own regional unit within the larger administrative region of the Ionian Islands, with the island population only around 35,000 people, mostly concentrated in the towns of Argostoli and Lixouri.

The park is located in the southern portion of the island, with the Ionian Sea to the south, and views of the northwestern tip of the Peloponnese to the southeast. Its titular mountain, Mount Ainos, is the tallest peak on Kefalonia, with neighboring Megalos Soros (or Megas Soros) close at 1,617 m (5,305 ft) tall but only at a prominence of 35 m (115 ft). These mountains form a dramatic crest through the heart of the national park, like the spinal cord of Kefalonia.

Over 200 million years ago, during the Mesozoic era, the park was submerged beneath the Tethys Sea, where sediments gradually accumulated and organisms fossilized. After a long period of intense tectonic movement and shifting, Kefalonia and the greater Greek landscape as it is known today emerged.

From those years of sedimentation, the bedrock of Ainos is now primarily limestone and dolomite from the Cretaceous period; likewise from that time there are many fossils, primarily of sponges, molluscs, echinodermata, and bryozoa.

The vegetation of Ainos represents the characteristically Mediterranean vegetation of Kefalonia, which contains both shrubland and thick evergreen forests. These forests consist largely of conifers like the Kefalonian fir and black pine, with sparse populations of Valonia oak, European hop-hornbeam, and holm oaks scattered throughout.

Smaller trees and shrubs like myrtle, lentisk, carob, arbutus, amaranth, heather, and thyme are likewise prevalent. And, of course, characteristic Greek vegetation like the strawberry tree and wild olive are certainly present.

Wildflowers and mushrooms are omnipresent throughout the park, bringing much color to its lush green forests. In particular, dozens of orchid species can be found, including species native solely to the Ionian islands. Other rare and/or endemic species found in the park include the Viola cephalonica, Acis ionica, and the eastern bugle, among many more.

With regards to fauna, Ainos is famously home to the very rare Ainos pony, semi-world horses that descend from an older breed of the Pindus Mountains. Otherwise, the wild mammals of Ainos include hares, hedgehogs, moles, foxes, martens, weasels, badgers, numerous rodents, and even bats, primarily found in the mountains’ many caves.

Hundreds of bird species have been reported in the park, often species typical to the mountains of Greece. These include the black woodpecker, Sardinian warbler, coal tit, rock partridge, goldcrest, raven, woodlark, birds of prey like the peregrine falcon, buzzard, and goshawk, and scavengers like the vulture.

As for amphibians and reptiles, the former are more scarce, mainly represented by the common toad, while the latter can be found in the form of Hermann’s tortoises, Greek algyroides, blue-throated keeled lizards, Balkan wall lizards, European ratsnakes, horned vipers, Balkan whip snakes, and a handful of other species.

For millennia, stemming back to Homeric descriptions of Ainos and the island of Kefalonia on which it lies, Mount Ainos has had a particularly important religious, mythological, and cultural connotation. Ancient Greek priests of the mountain built an altar for Zeus atop its summit, where they frequently engaged in animal sacrifice.

Ainos was also important for nautical purposes, serving both as a source of timber for building ships and as a point of reference for sailors across the Ionian. The use of the heavily-forested mountain for physical resources would continue for quite some time, often to rather disastrous ends, as the Venetians of the sixteenth century heavily over-exploited the forests to the point Ainos was nearly cleared of them.

Furthermore, a series of forest fires from the sixteenth to eighteenth centuries continued to lay waste to the mountain. However, Charles Napier, governor of Kefalonia while it was under British control in the 1800s, had a special affinity for the region and was involved in preserving its forests and unique fir trees.

Once Kefalonia, alongside the other Ionian Islands, became officially part of modern Greece, the government took some interest in protecting the island and its flora, and eventually in 1962, Ainos became a national park.

Ainos National Park contains a multitude of ways in which its beautiful sights and natural wonders can be experienced, such as the 6.6 km (4.1 mi) long Enos Trail, reaching the spectacular summit of the mountain through forests of firs, oaks, pines, and bounties of native wildflowers.

One of the longer trails is the circular Kissos - Petasi - Nyfi - Megas Soros - Kissos trail, at around 8.6 km (5.3 mi), which leads to the wondrous caves of Petasi and Nyfi and, toward the end, the just as wondrous—if not more-so--views of the Ionian from atop Megas Soros.

With Kefalonia being rather sparsely populated at only around 35,000 people, the cities nearest Ainos National Park mostly take the shape of large but nonetheless dynamic towns with plenty of options for lodging. There are, however, larger cities on the mainland, which tend to be about a three hour ferry ride from Kefalonia’s ports. Here are some of the best places to check out in the region:

Though a small city of only 10,000 people, Argostoli, the capital of Kefalonia, is a bustling and prosperous port town where the history and culture of Kefalonia can be enjoyed in full force, such as in the Focas Kosmetatos Foundation, a museum devoted to Kefalonian history.

Bars, cafés, and restaurants are abundant, boasting exquisite seafood and Kefalonian cuisine. Much of the action revolves around the Lithostroto Pedestrian Mall Street, the Platia Vallianou square in the center of town which includes the Ionian Plaza Hotel, and the waterfront, with a promenade perfect for walking along the gorgeous Ionian Sea, beaches, and an always-active harbor.

Located near Argostoli is the stunning beach resort of Lassi, a bird sanctuary, small villages and settlements like those of Livatho, the Gentilini Winery, and many more sights to see when on the island of Kefalonia.

Argostoli can be reached from the mainland with a ferry from Patras or Kyllini, or one can fly into Kefalonia International Airport nearby and take a bus into the town.

The port city of Patras, which also happens to be Greece’s third-largest city at over 300,000 people in its metropolitan area, is one of the common cities used to get to Kefalonia and, by extension, Mount Ainos. There is much to see among the rugged hills and cobbled streets of Patras, where medieval castles, Mycenaean cemeteries, Roman archaeological sites, Ottoman baths, museums, and neoclassical mansions reveal a rich and extensive history.

The city also contains many beautiful parks, fountains, city squares, and waterfront views, as well as great cafés and vibrant nightlife. It hosts one of the biggest carnivals in Europe in the ancient and splendorous Patras Carnival, alongside several other festivals and celebrations that epitomize Patras’ thriving theater and arts scene.

Patras’ port connects it not just to Kefalonia but to many of the Ionian islands and even several cities in Italy; otherwise, public transportation in the area mainly consists of many bus lines and limited commuter rail services. 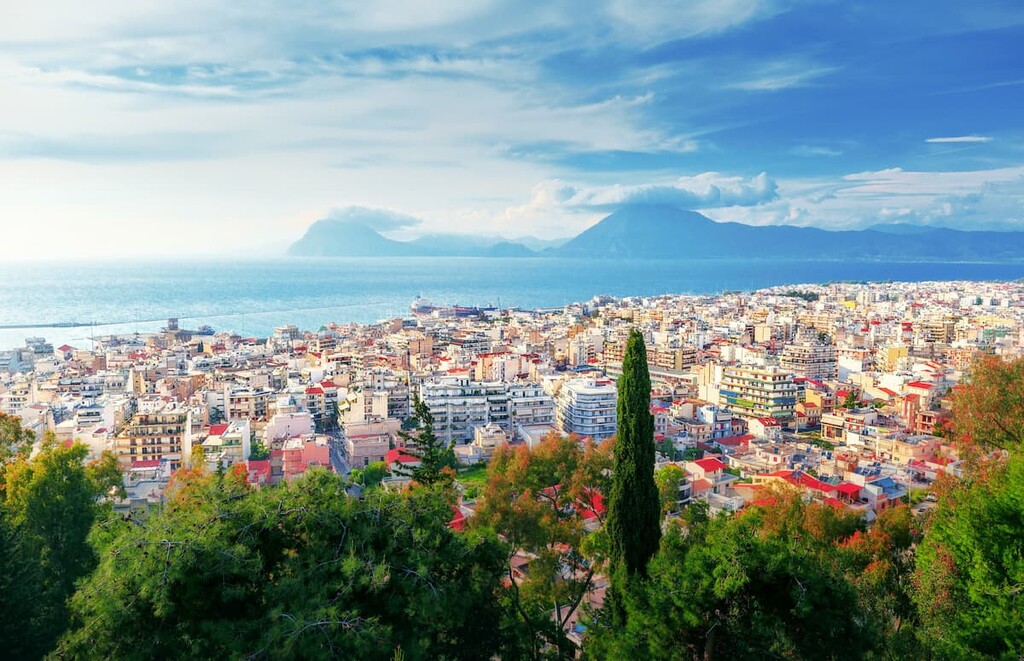 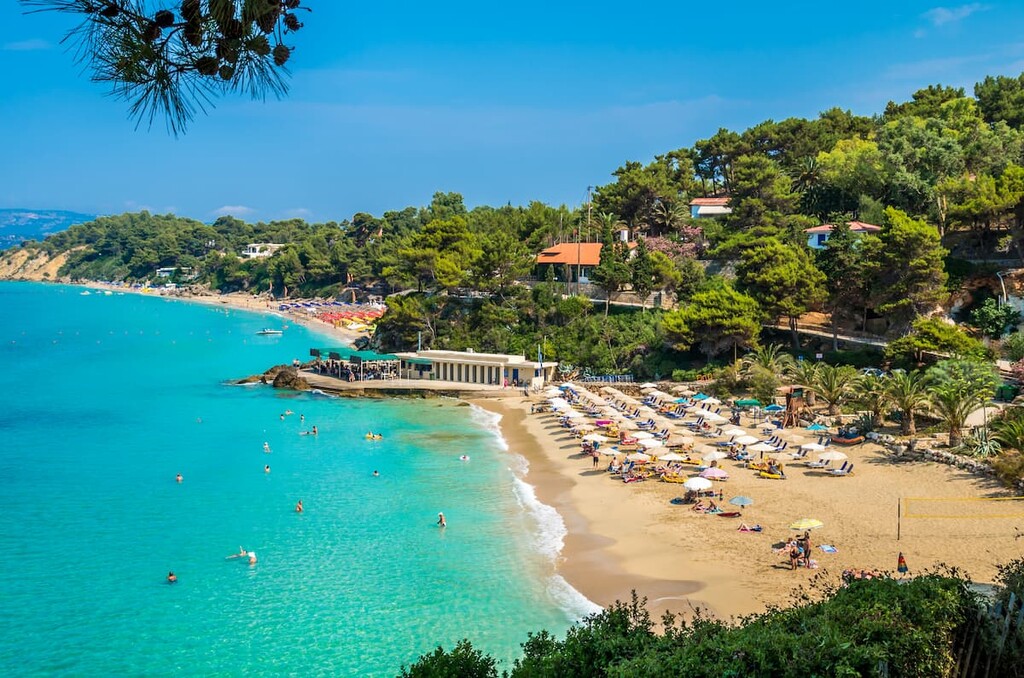 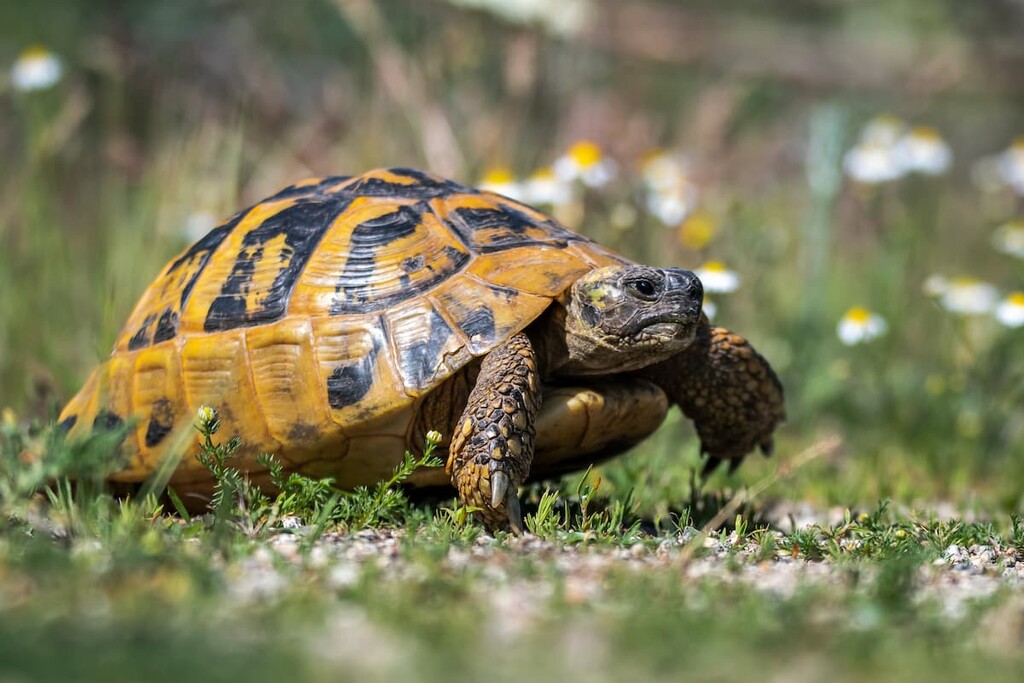 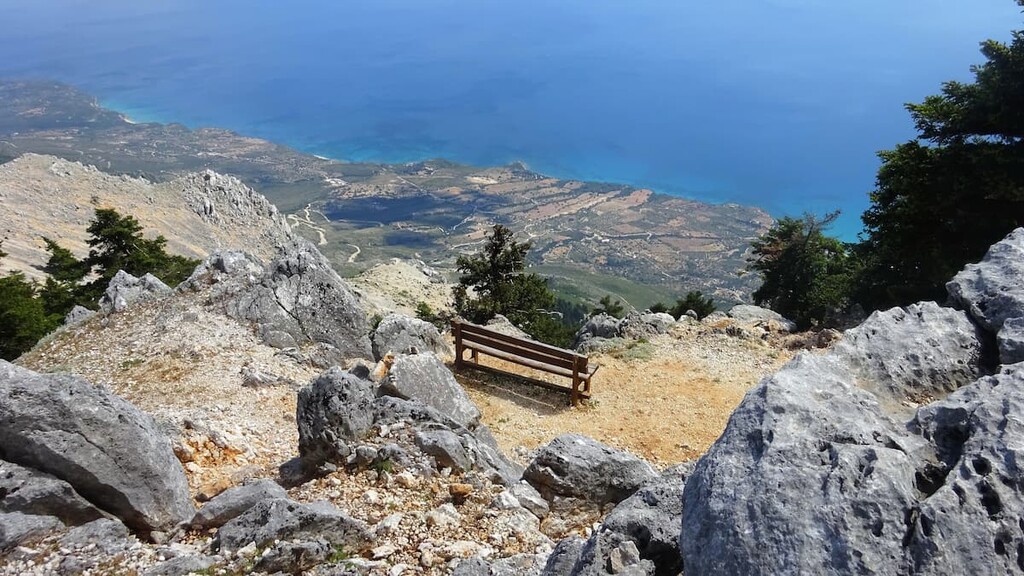 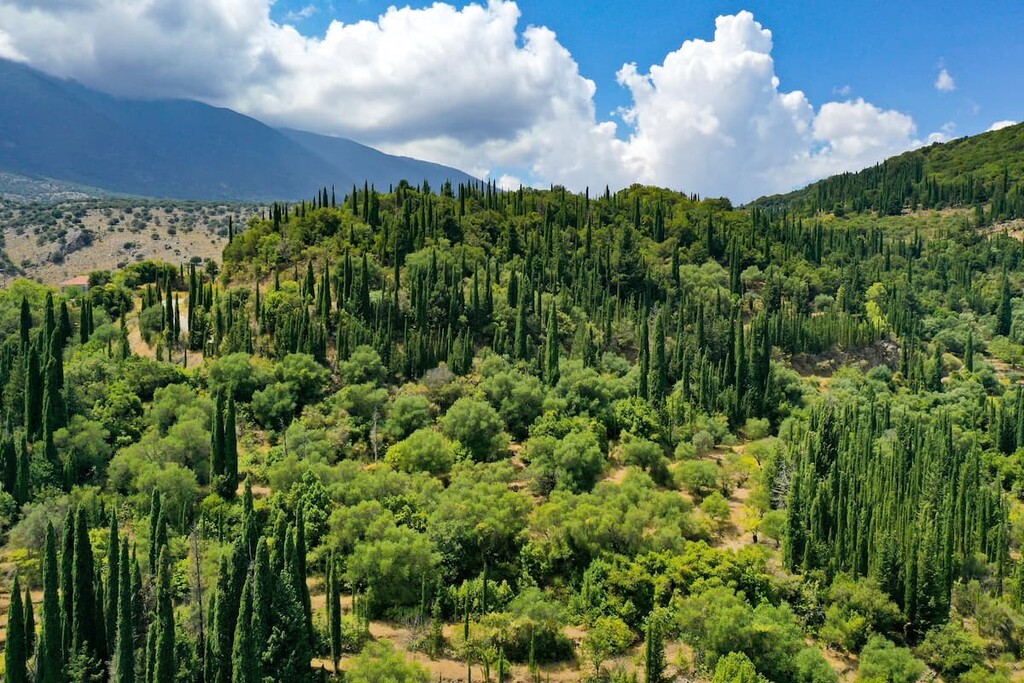 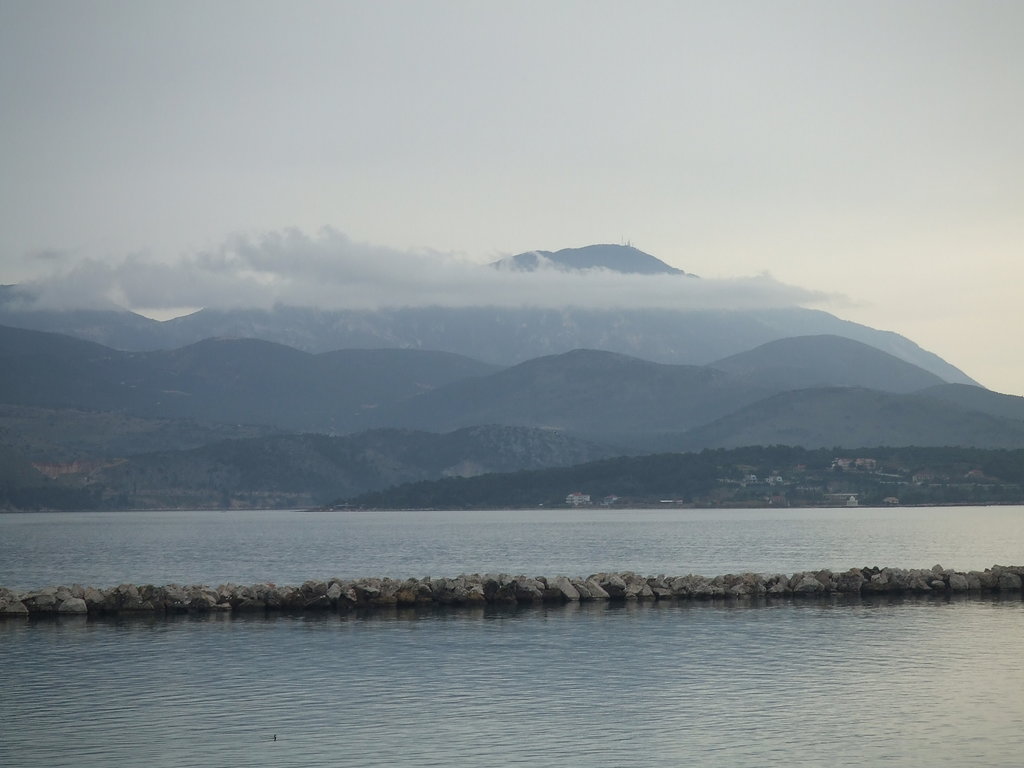