If your high altitude travels are missing mysteries, legends and spirituality, then look no further. The Bucegi mountains are, quite possibly, the most famous around Romania because of the “Sphynx” and the tales surrounding this range. Smaller than its Egyptian counterpart, this natural formation and the mountain underneath sparked stories of the divine energy fields, UFOs, mountains spirits, the philosopher stone, sun pyramids, and godly signs. If this is not enough paranormal, then what is? 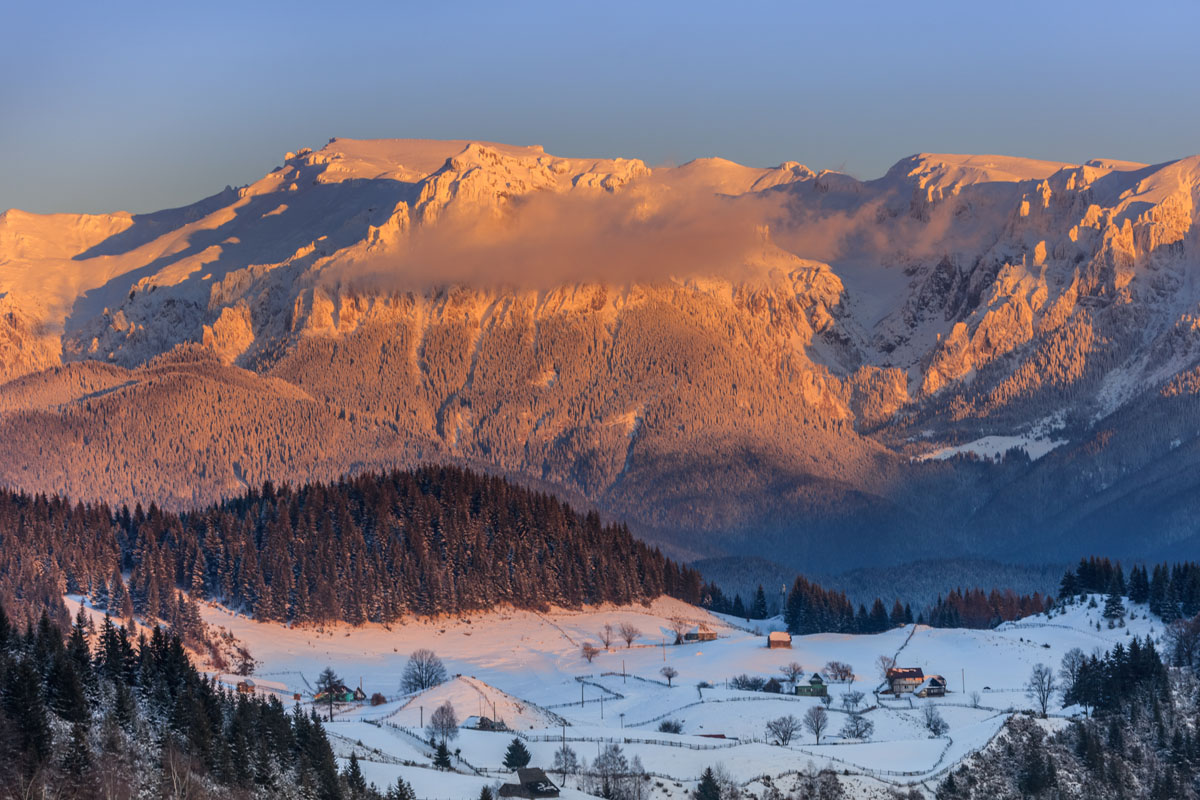 Just a two-hour drive from Bucharest, the Bucegi range is the first massive mountain you will encounter on the way towards Transylvanian lands. With over 300 square km, the range sits between three counties and borders the Prahova Valley in the east and Bran high pass in the west. That is where Dracula’s castle resides, so you can very well reach that hot spot by traversing the range.

The massif is the cradle of Romanian alpinism, with emblematic peaks, knife ridges, north faces and chimneys that were gradually conquered by alpine clubs from all over the country.

The legendary routes such as Gălbinele Tower, Coștila-Gălbinele ridge, Furcile, Acele Morarului ridge, the Aerial Ledge or the Great Ledge of Coștila make some of the most extraordinary alpine climbs in the area. However, the most prolific area for climbing is Coștila peak. The White Valley Wall, over 350m tall, is the largest big wall in the country. Also, the Eagles wall, the Coștila wall, the Gălbinele wall and the north face of Coștila have great climbing features and host a couple of hundred multi-pitch routes.

The Coștila refuge was built particularly to serve as a base camp for climbers and the training grounds. There are two large towers near the refuge – Țancul Mic and Țancul Ascuțit. In the refuge, you will find topos for the most frequent climbs in the area. Take into consideration that the conglomerate can be unstable in some sectors, so avoid very old or forsaken routes that are not well maintained. Other great climbing features are some steep valleys and chimneys in Caraiman and Coștila peaks, mostly on their east and north faces.

Omu peak has the most share of tourists since it is the highest point in the Bucegi mountains. Moreover, right on top, there is the Omu chalet and just a few meters away there is the Omu meteorological station. The rock formation in the back of the chalet reaches the altitude of 2,514m. The peak offers great views towards two spectacular valleys of the Massif, the Cerbului Valley and the Gaura Valley, as well as some nearby ranges, such as the Piatra Craiului, the Baiului, the Postăvaru and the Piatra Mare. You will find the Omu chalet open only in the high season, and although the meteorological station is operated for the whole year, they do not give support or shelter during emergencies.

Just an hour and a half away from Omu, you will encounter the Sphynx and “The Dames”, natural rock formations shaped by water and wind. Basically, being a megalith standing 8m tall, the Sphynx is associated with an old deity of the Pelasgian empire. The intriguing shapes gave birth to a lot of legends, and it is believed that around the Sphynx there is an energy halo or energy point. There is even an annual meeting of the phenomenon passionates that ends up in dancing around the megalith.

Another striking feature of the Bucegi is the Heroes Cross built on Caraiman Peak. This massive monument honours the WWI Romanian soldiers and is a must-see. The Cross Trail gives a spectacular view over the deep valleys of the Bucegi, steep walls and amazing rock formations. You can reach the cross from Omu peak by taking the Jepii Mici trail from Bușteni or the Cross Trail from Caraiman chalet.

You will find access to be fairly easy, with two cable cars and two motorways in place, besides the numerous hiking trails. The cable cars are located in Sinaia and Bușteni. The one in Sinaia will take you up to 1,400m, where you have to switch in order to get to 2,000m. Both will run if the wind allows it, so it is recommended that you check the weather forecast or send a query to the operators in the morning before going up. Also, you can take one road from Moroeni up to Bolboci lake, or from Sinaia and go either up the plateau or towards the Ialomiței Valley.

Accessing the range is quite easy when it comes to hiking trails. If you find yourself in the Prahova Valley, on National Road 1, you can start your climbs from Predeal, Azuga, Bușteni, Sinaia or Poiana Țapului. If, on the contrary, you have just visited Dracula’s castle, you can ascend from Bran, Rucăr, or Zărnești.

The Bucegi range has the shape of a horseshoe, thus collecting a lot of water inside, on the plateau. This led to the formation of deep, wet gorges and lakes at the back end of the horseshoe. Țigănești and Bolboci lakes, as well as Orzei, Zănoagei, Tătarului gorges, are specific to this type of erosion and water accumulation. As the main rock type is conglomerate, this gets easily eroded by water and shapes the above rock formations.

Chalets and refuges in the massif:

Any season will see a great number of mountain enthusiasts on the trails of Bucegi. Alpine climbs, winter mountaineering, skiing, trekking, ice climbing, all of these can be enjoyed in the range. Beware of rockfall in adventure terrain, avalanches and the steep couloirs of the valleys, these will claim the most victims in winter.

Jepii Mici and the Sphynx

This medium difficulty trail will take you through the steep valley situated between Jepii Mici and Caraiman peaks. High above, the cable car line can be seen, but do not take it unless you really have to. Reaching the Caraiman chalet by following the blue cross trail takes close to 3h, depending on your fitness. You can return from Babele chalet by cable car, traverse the plateau towards Omu and descend the Cerbului Valley or take the Jepii Mari trail. All trails will lead back to Bușteni.

The departure point is from the cable car station in Bușteni. Take the street that passes the station, go up until you reach a country road. You should have seen already the trail marks, pick the blue cross and off you go to explore.

The Cerbului Valley is by far one of the most spectacular in the massif. The north face of Coștila and the south face of Morar have incredible features that open up as you gain altitude. The trail takes you to Omu peak in 6h or more depending on your departure point. From Omu you can descend the Morar Valley, go towards Mălăiești chalet or traverse the plateau to reach Babele chalet and the cable car.

Pick the red triangle trail from Bușteni, near the Căminul Alpin building. After 2 hours, you will reach the Coștila clearing. Soon after the clearing, take the left at the first crossroad, towards Cerbului Valley, on the yellow band.

The Mălăiești glacial valley is a must if you plan to see the greatness of the Bucegi. Reach it via Diham chalet or from Râșnov, and make a pit stop at Mălăieștii chalet. From here, either take the steep climb towards Padina Crucii or go through the Big Chimney of Mălăiești. Both the trails will take you to the plateau and towards Țigănești towers. Further on, the Țigănești ridge and the refuge await. You can turn back from here or descend towards Bran, on the Clincea ridge.

Sinaia is the so-called royal city of Romania, so while you are here make sure to pay a visit to Peleș Castle. There is a cable car to be taken up to 2,000m, on the plateau. Alternatively, you can use a country road that gets you to Stâna Regală and pick the trail from there. In winter, Sinaia is also a ski resort so do not miss the great slopes of the eastern Bucegi.

Just 20 minutes by car away from Sinaia, this small city is the main access point towards the spectacular eastern Bucegi. The distances from the city to a number of features, peaks and ridges are fairly equal, so pick this city for most of your hiking trips in Bucegi.

There are smaller ski resorts, use these cities to reach Bucegi through long wooded trails. The closest chalet is Diham, and you can continue your hikes from there.

Once you’re done visiting Dracula’s castle, you can start hiking from Bran or go further to Șimon or Moieciu de Jos. The trails you will pick can take you on the west side of the Bucegi, through the Gaura Valley, the Clincea or the Ciubotea ridges and some other fabulous scenery, which is a bit wilder and with fewer tourists than on the range’s east side. 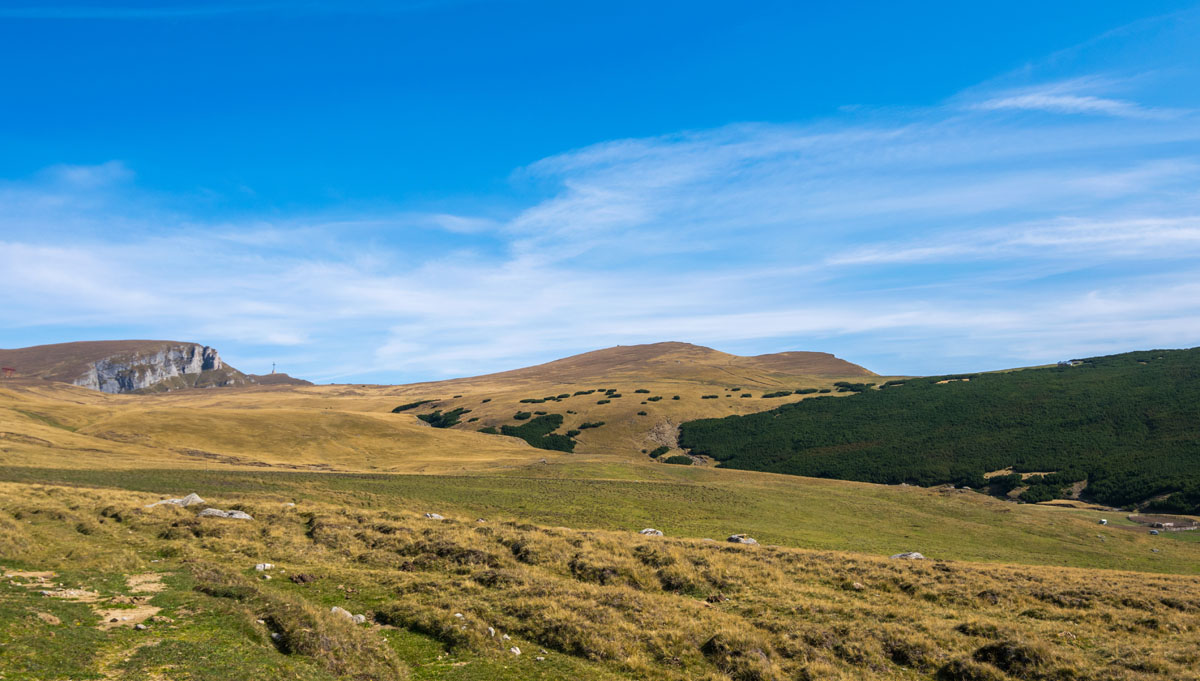 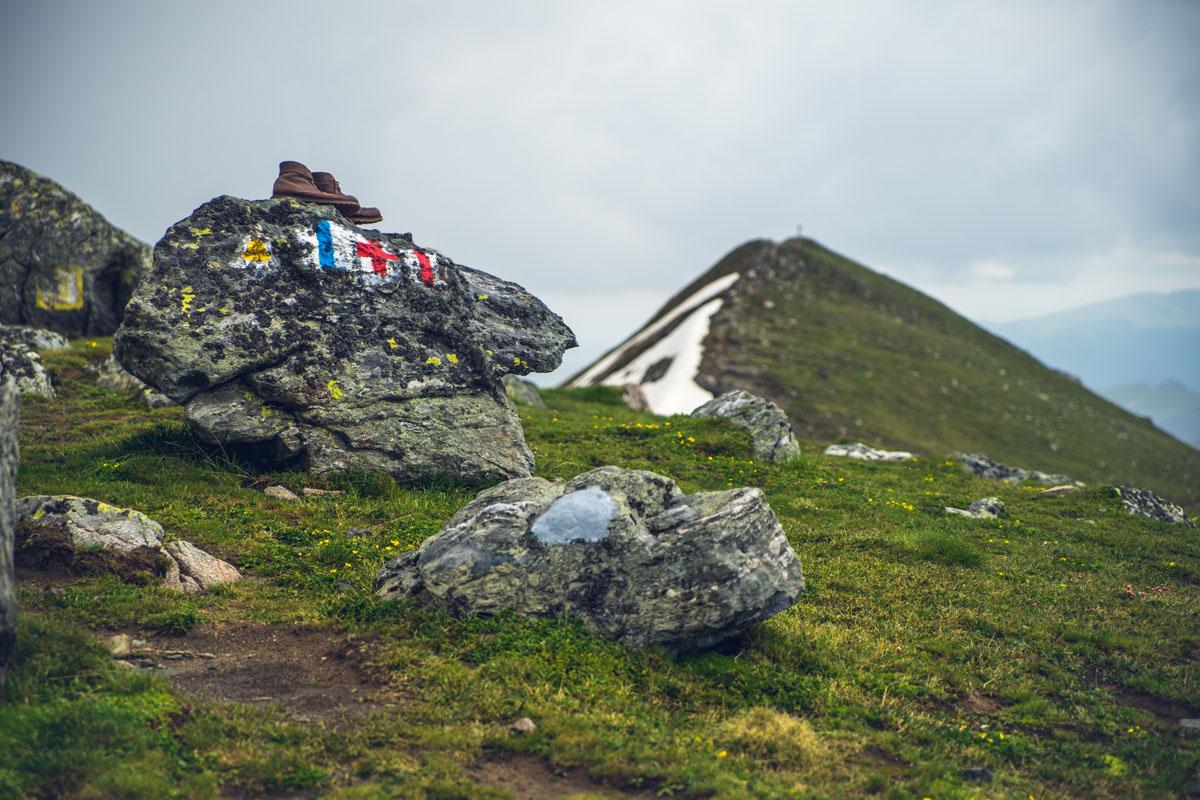 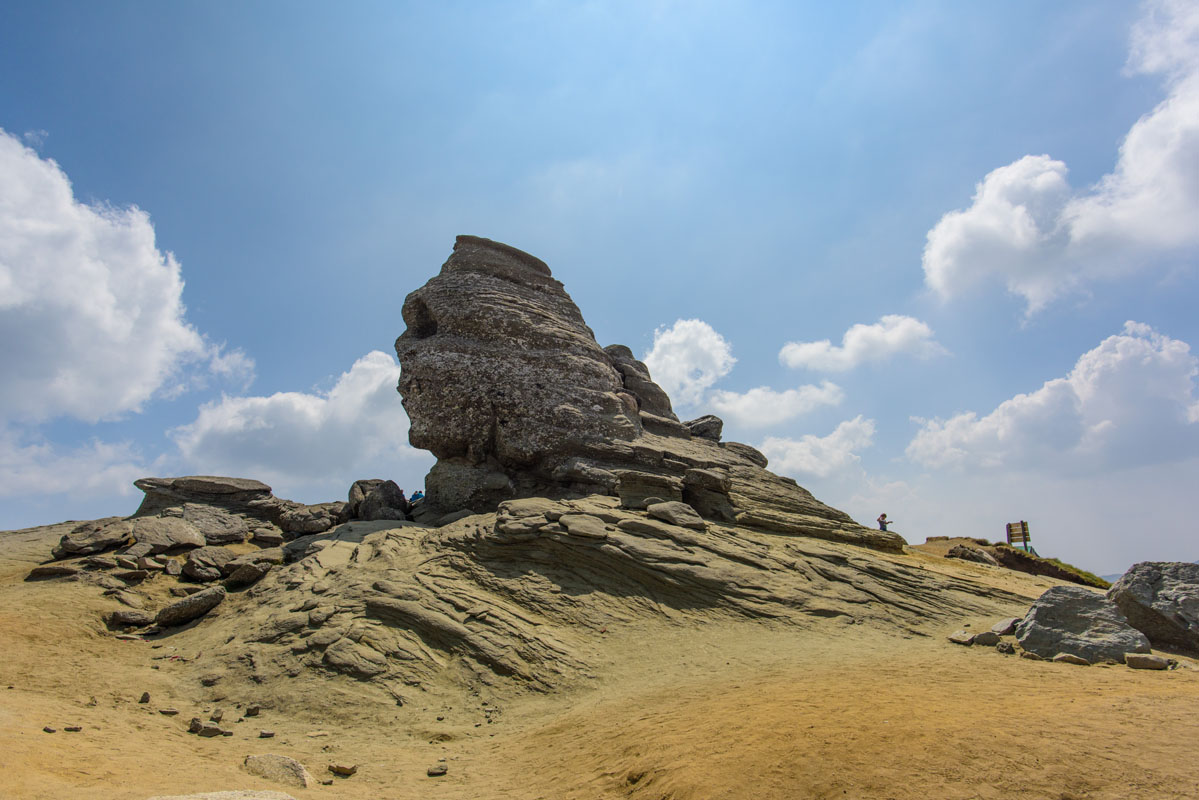 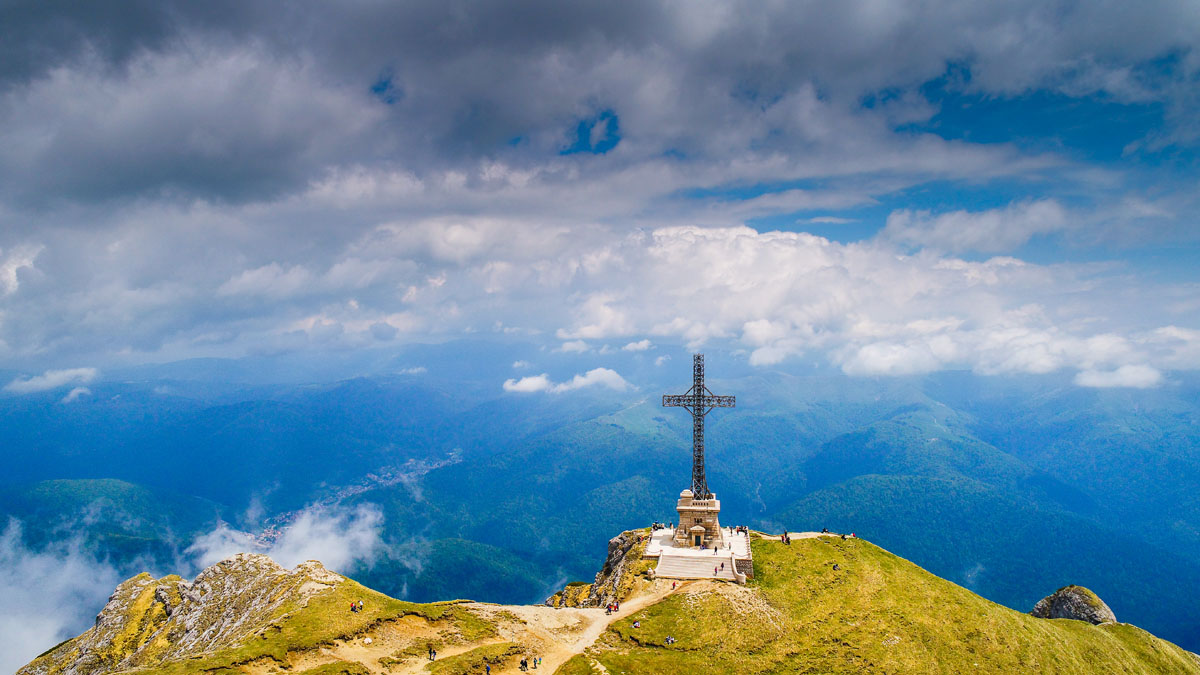 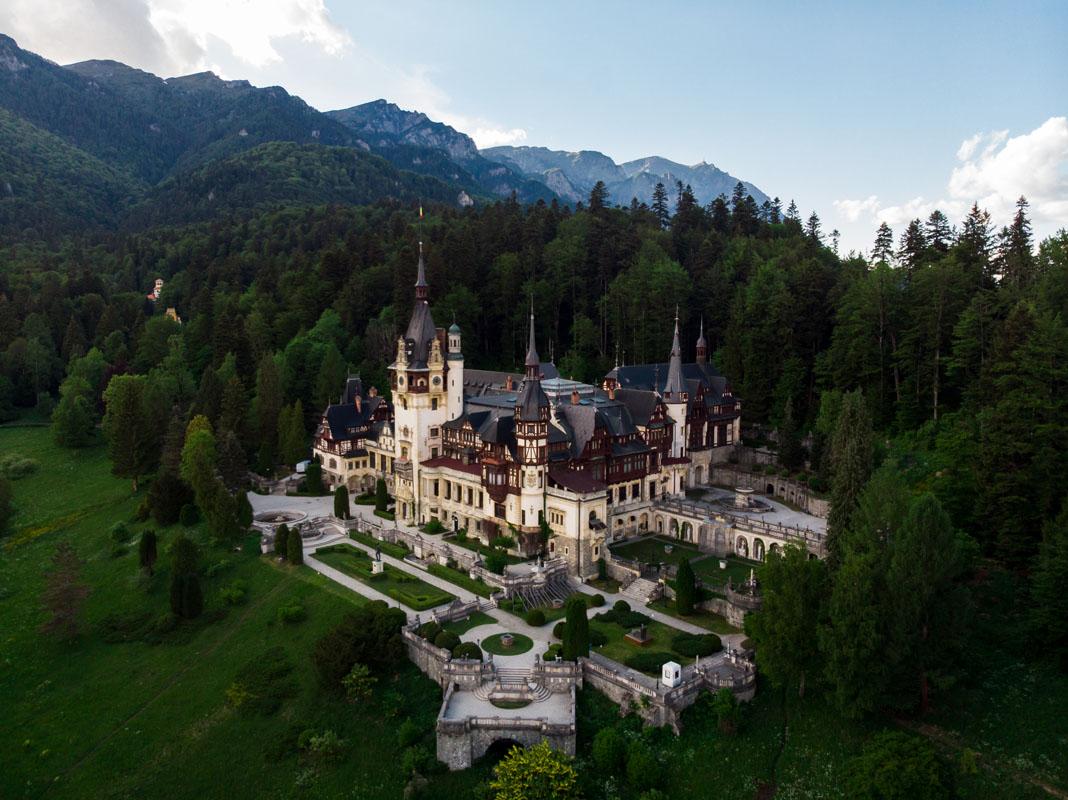 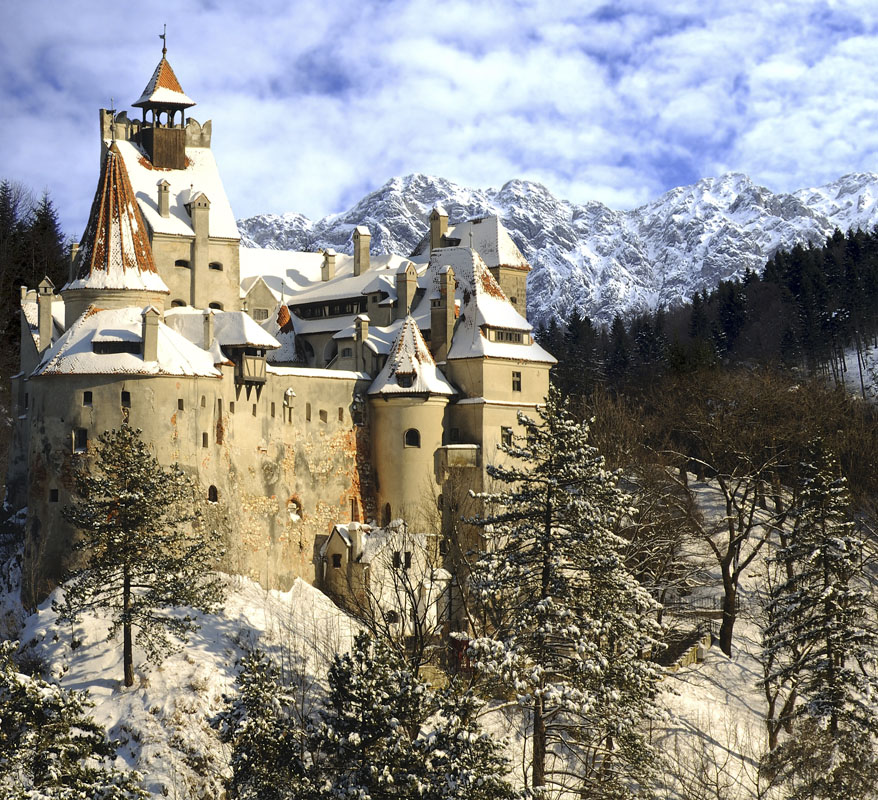 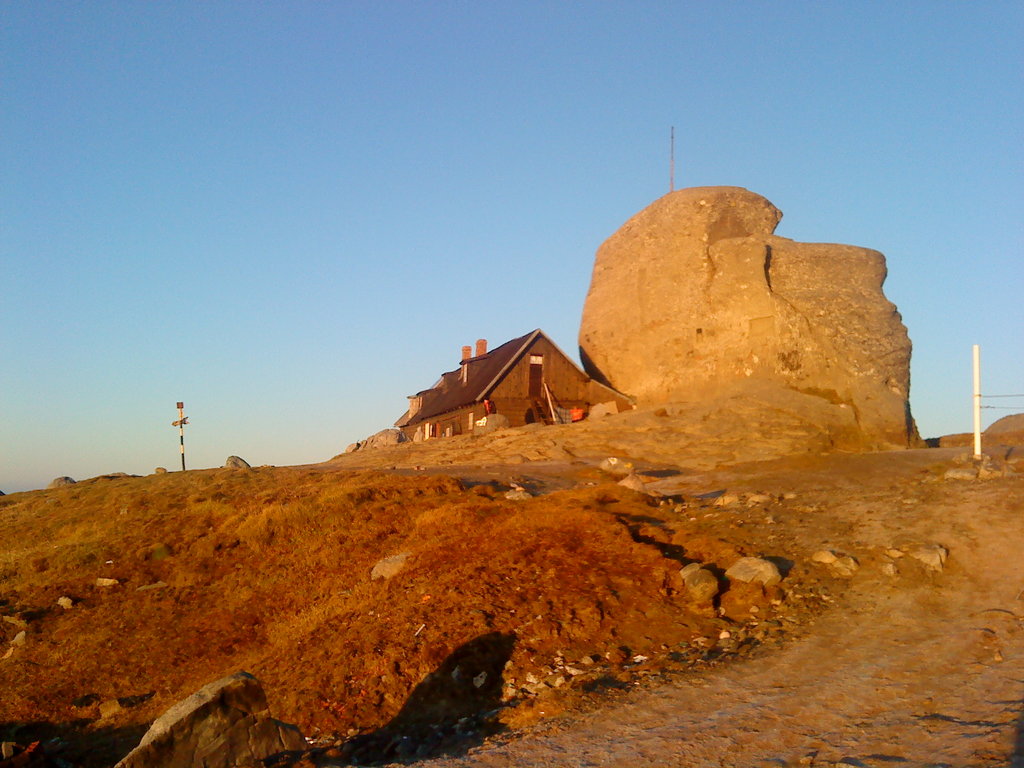 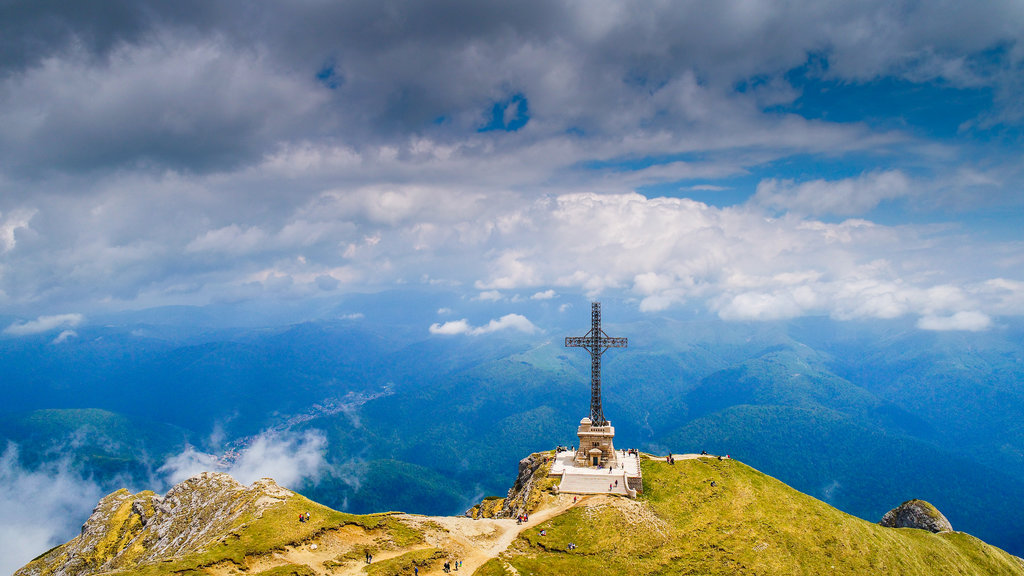