Mount Oeta (also transliterated as Oiti or Oite) National Park is one of the many geological and ecological wonders Greece, famed for both its natural beauty in the form of waterfalls, gorges, and mountain peaks, and its mythological significance as the scene of the great hero Hercules’ death. 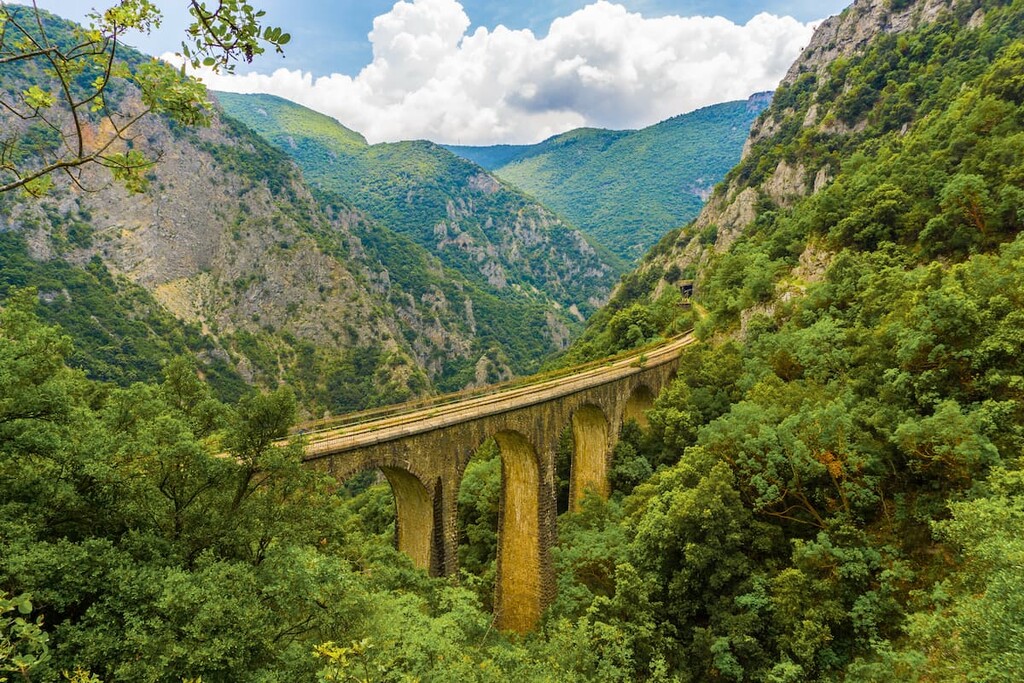 The mountain itself, an extension of Greece’s Pindus Mountain Range, is located in Central Greece, split between the regional unit of Phthiotis to the north and the regional unit of Phocis to the south. To the east of the park, though it does not touch it, is the Malian Gulf, leading into the Aegean Sea; further south is the Gulf of Corinth.

The park is characterized by numerous rivers, including the Mornos River, the Spercheios River, and its tributaries Gorgopotamos, Asopos, and Vistriza, and the dramatic gorges, caverns, and waterfalls that adjoin them, such as the Kremastos Waterfall, known as one of the tallest waterfalls in Greece.

Many of these rivers serve to separate it from nearby mountains, as Mount Oeta is neighbors with Mount Kallidromiou in the east, Vardousia and Giona in the south, and Goulina in the west. Among the high elevation alpine plains is a notable mountain lake, Lake Livadates.

Around 22 small settlements reside in and aride the mountain, with the closest major city being Lamia, the capital of Phthiotis, to the northeast. Generally, the park has a Mediterannean climate of warm and dry summers and cool and wet winters, though the climate does get cooler and more alpine at higher elevations.

The geological composition of the mountain is largely limestone and, to a lesser extent, flysch. The prominence of limestone has resulted in unique karst formations and systems, giving way to swallow-holes and caverns throughout the park.

Oeta is colloquially known as the “mountain of flowers,” and certainly not without reason, for it boasts a wide variety of beautiful flowers throughout its lands, including the veronica oetaea, which is completely endemic to the mountain. The poet’s daffodil, crocus, campanula, primula, orchid, lily, and many more help give the mountain its famous floral nature.

As for trees, one of the most characteristic is the Greek fir, occupying higher altitudes of the park, while oak trees like the kermes and holm are more prevalent at lower altitudes alongside Maquis scrubland. Other trees include strawberry trees, alders, willows, cedars, mountain cypresses, hawthorns, ashes, hornbeams, and black pines.

Mount Oeta is home to many of the typical animals of Balkan forests and mountains, including roe deer, brown bears, wolves, wild boars, wildcats, martens, and Balkan chamois.

The park is also home to a wide variety of birds, with many more visiting seasonally or infrequently. Raptors like the goshawk, nightjar, golden eagle, peregrine falcon, and short-toed snake eagle reside in the park, as well as many species of woodpecker, such as the black woodpecker and Syrian woodpecker. Other notable bird species that have been recorded in the park include the black stork, tawny pipit, rock partridge, and black redstart.

On certain plateaus and seasonal ponds, the small amphibians like the endangered alpine can be found. As for the park’s rivers and lakes, brown trouts, Macedonian chubs, and Sperchios barbel represent the park’s fish life.

The area of Mount Oeta has long held significance to the Greeks, known as the location of the story of Hercules’ death and his funeral pyre. The Doric temple dedicated to Hercules was in use until late in the Roman Empire’s history, and today still stands in ruins.

Otherwise, Oeta was politically significant as a part of the then-ancient region of Thessaly, with the modern village of Ypati being the center of the Ainis or Aeniania people and their region, then known as Hypate or Hypata. Hypate was historically famed for its women, said to have had a particular interest in witchcraft, who were believed to have practiced their magic in the nearby grotto of Anemotrypa.

The city maintained a level of prominence by the 500s AD, when its walls were repaired by Justinian I of the Byzantine Empire.

A turbulent series of invasions likely caused the abandonment of the city as an urban center, becoming primarily a center of ecclesiastical activity until becoming the capital of Thessaly in the 1200s. Throughout the centuries, fortresses, Greek Orthodox monasteries, chapels, and Byzantine castles ended up established among the slopes of the mountain and its villages.

During World War II and Axis occupation of Greece, the area around Mount Oeta became significant for the Greek Resistance movement, with Greek Resistance and British forces allying to destroy the Gorgopotamos viaduct nearby, named for the Gorgopotamos river that runs through the park, in order to cut off an important Axis railway line between Athens and Thessaloniki.

The mountain is interwoven with a number of trails leading in and out of its grand heart, ascending and descending through vast tracts of forest and alpine landscape.

From the village of Ypati are several trails into the mountain’s center. The Ypati - Amaliovrysi - Perdikovrysi - Oeta Refuge trail, at around 8km/5mi, runs past small clearings and flatlands to the Oeta Refuge. Ypati - Castle - Ypati, a 4km/2.5mi trail of slightly less difficulty, offers a chance to explore the Anemotrypa cave, as well as some of Oeta’s waterfalls and streams, en route to the village’s famed Byzantine castle.

The Ypati - Kremastos Waterfall - Ypati trail offers a different 2.4km/1.5mi route to a beautiful waterfall, tucked among the rocky slopes and lush greenery of the mountain. Lastly, there is the 4.4km/2.7mi Ypati - Perivolia location - Arsalis chapel hike, from which one can see several stunning religious monuments, like St. John’s Chapel, the Perivolia shrine, and the brilliant blue Arsali chapel, tucked into a dramatic rock face.

Two main trails, the Oeta Refuge - Karitsa - Loutra Ypatis, and the Oeta Refuge - Greveno, Alykaina, Pyrgos Peaks - Neochori begin at the titular refuge. The former is a 12.6km/7.8mi hike through steep and rugged mountain terrain with magnificent views, while the latter is a 17.3km/10.7mi hike to the mountain’s highest peak, Pyrgos, where the surrounding land unravels amazingly around it.

Another common starting point for Oeta’s trails is the village of Kastania. The 7.2km/4.5 Kastania - Kapnochori - Ypati trail through streams and shrines winds through the mountain before ending in the aforementioned village of Ypati, as does the 8.2km/5.1mi Kastania - Petrotos Peak - Ypati trail, from the acme of which at Petrotos is a stunning view of the Greek landscape.

The shorter Kastania - Pathena Col traill, at 3.8km/2.4, is nonetheless notable for its scenes of snow-capped mountains that await from below, where the path passes through rich green forest and grassland.

The village of Pavliani is home to the 15km/9.3mi Pavliani - Katavothra - Pavliani trail, otherwise known as Hercules’ Path for the Doric temple ruins believed to be the funeral pyre of the great mythological hero, Hercules.

There are many other paths to experience the beauty and grandeur of Oeta and the surrounding lands and villages, including:

Around the area of the park are 22 small and ancient villages, which may provide many local opportunities for lodging and dining amid the breathtaking environment of Oeta. Outside the park, meanwhile, there are several larger cities well-connected to other natural and historical sites of Greece, with the closest being the city of Lamia.

The city of Lamia, located just northwest of the park, is a vibrant and archaeologically significant city of around 100,000 people, serving as the capital of the Central Greece region and the Phthiotis regional unit. The mountains provide a wonderful backdrop to Lamia and its monuments, like the ancient Lamia Castle.

Several squares such as Freedom Square, Diakos Square, Park Square, and the People’s Square boast cafes, restaurants, hotels, and numerous statues of historically relevant Lamian figures. The city’s history can also be seen through its many museums, churches, monasteries, and memorials.

Further, Lamia is in very close proximity to some incredibly important sites in Greek history, like the aforementioned villages of Gorgopotamos and Ypati, and the famous plain of Thermopylae near the Malian Gulf. 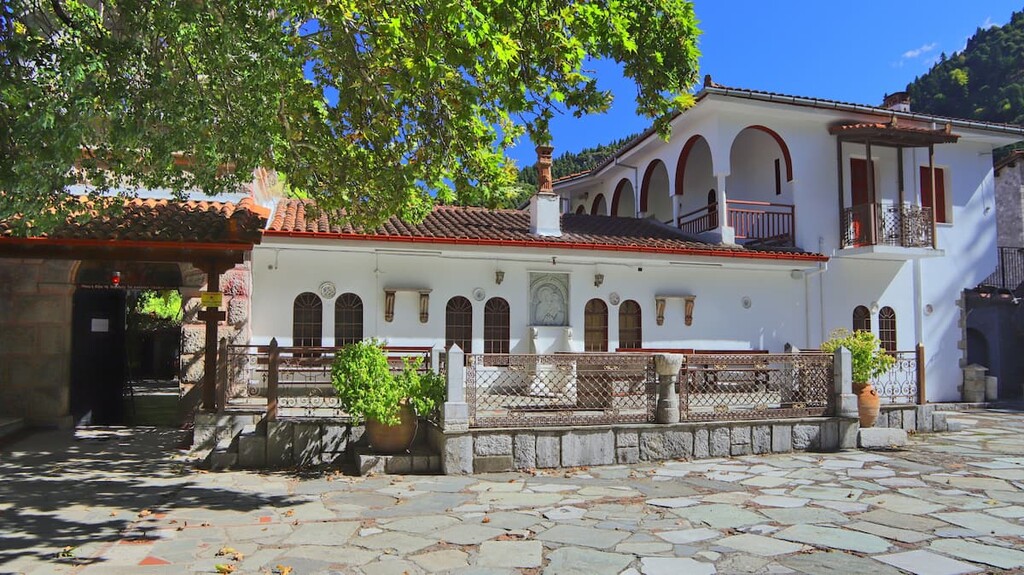 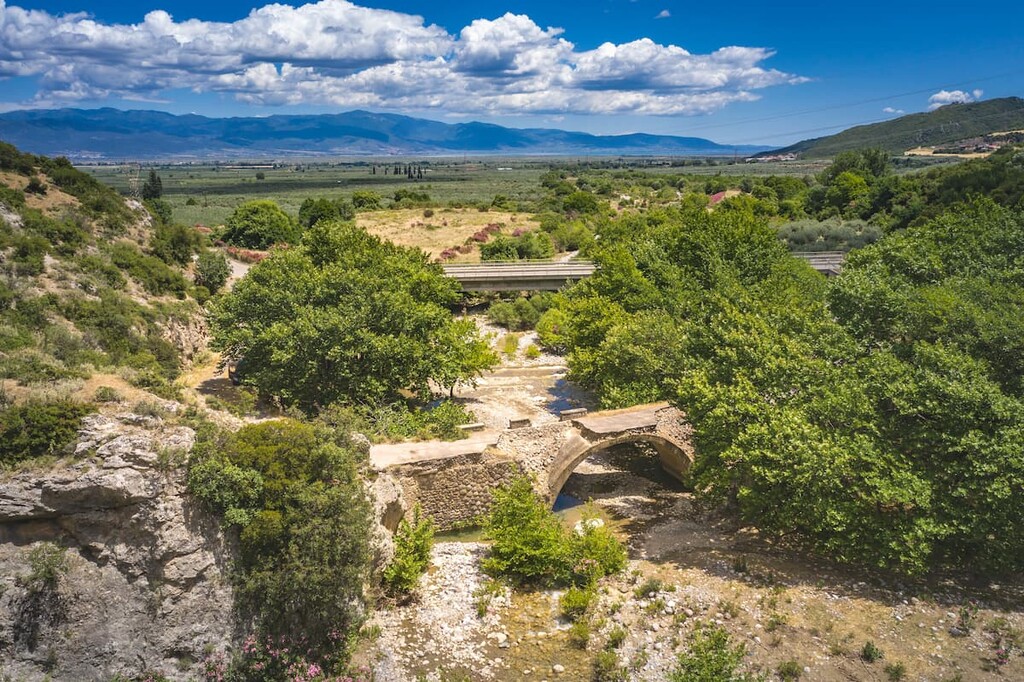 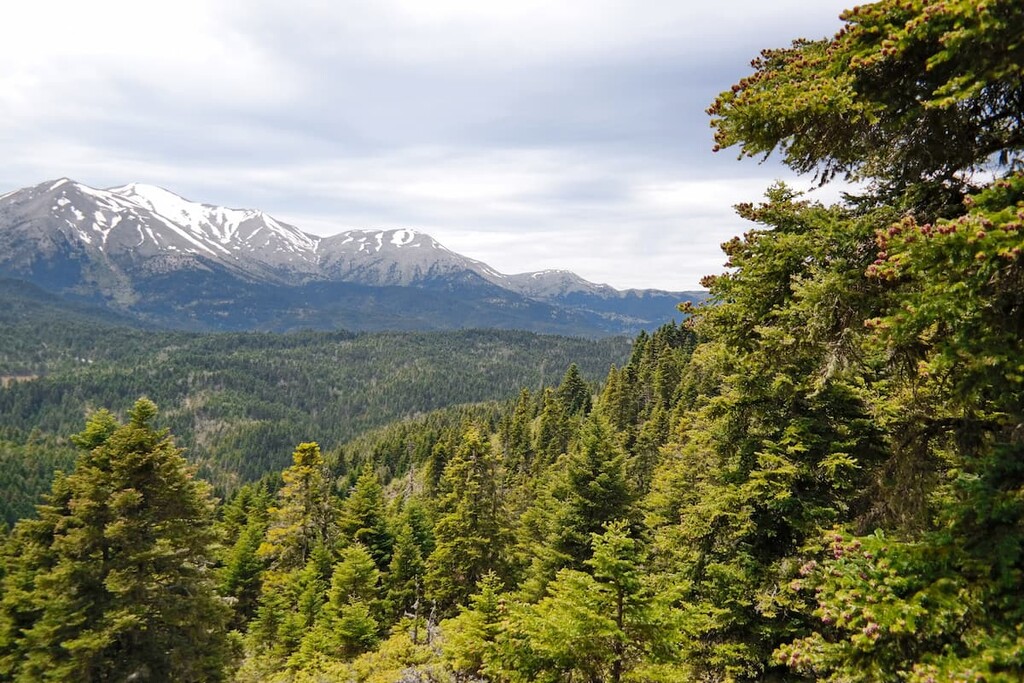 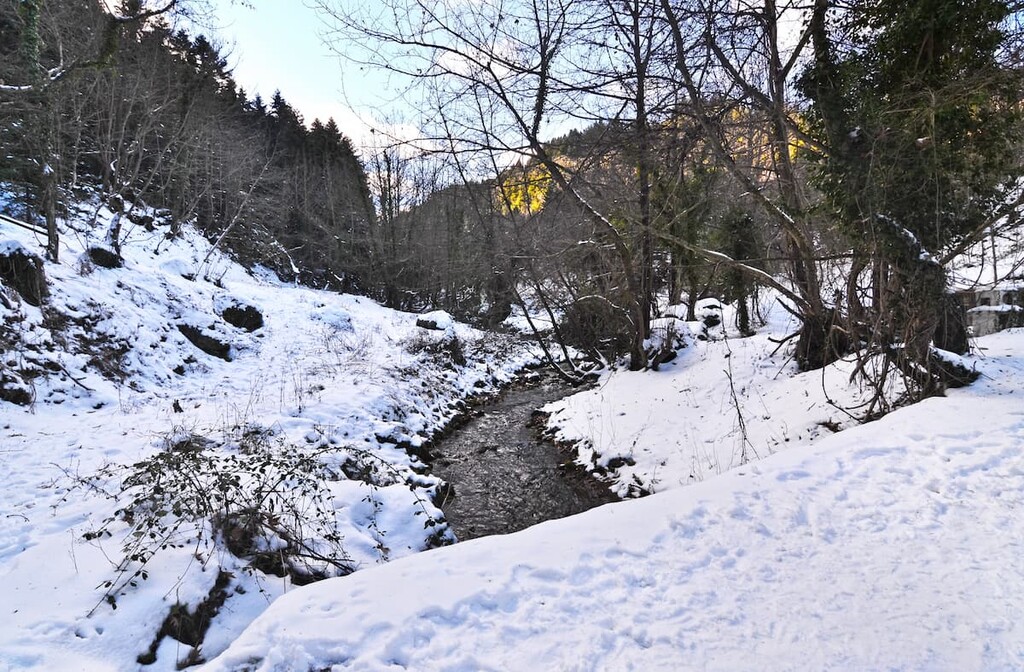 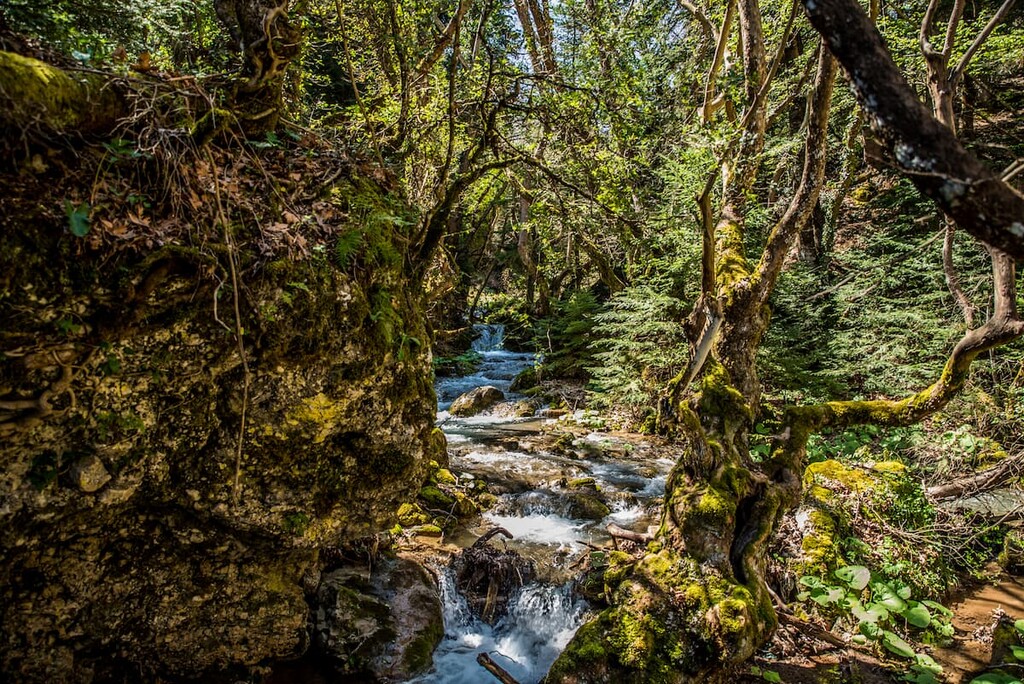 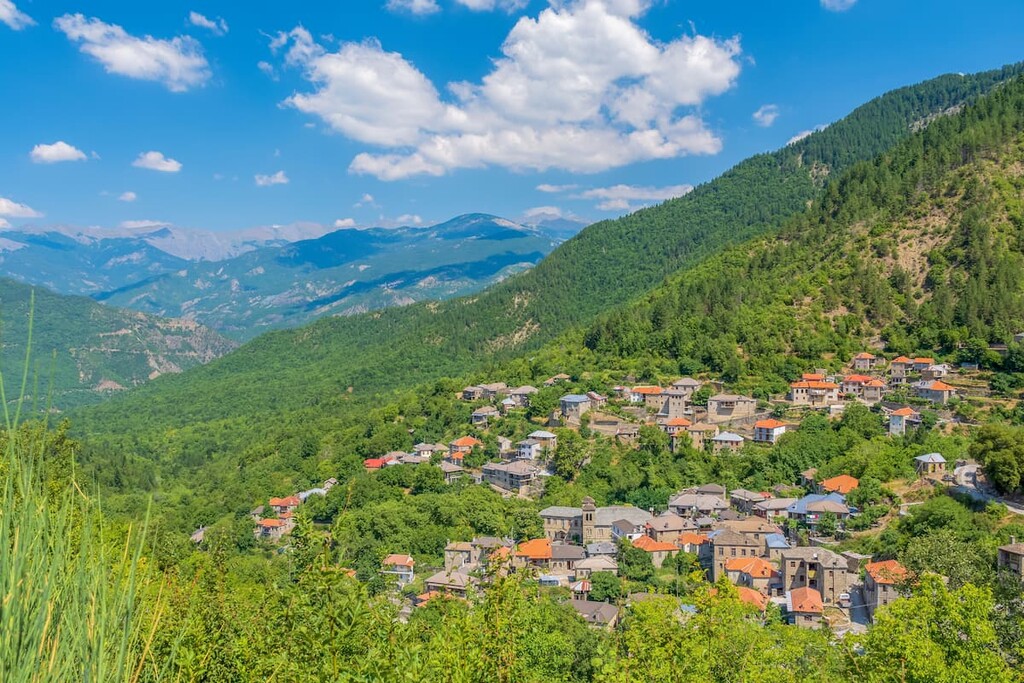 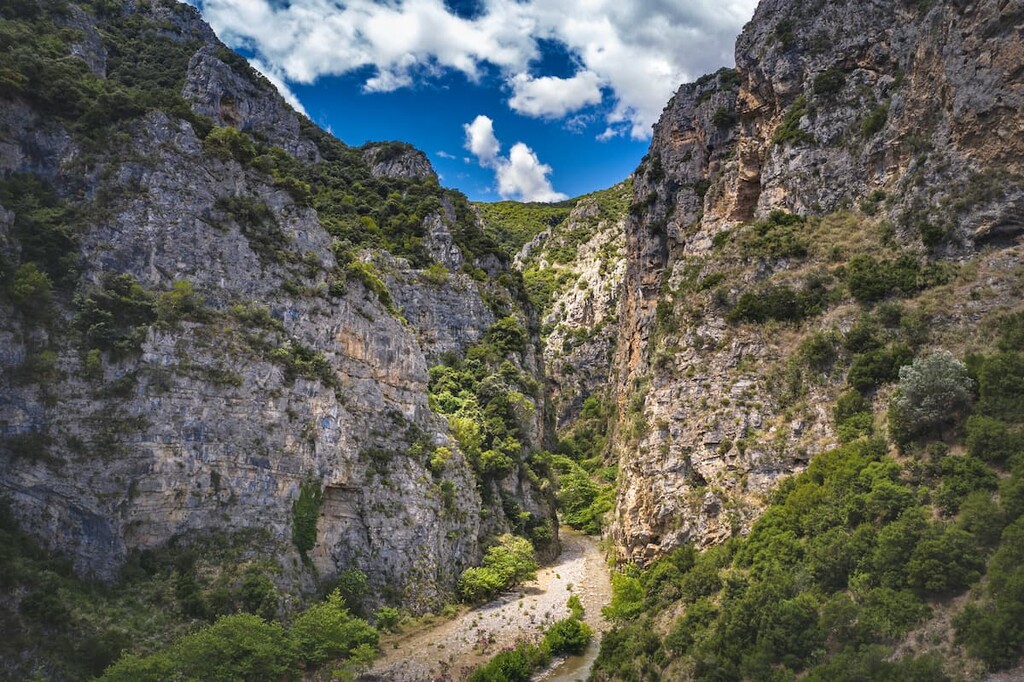