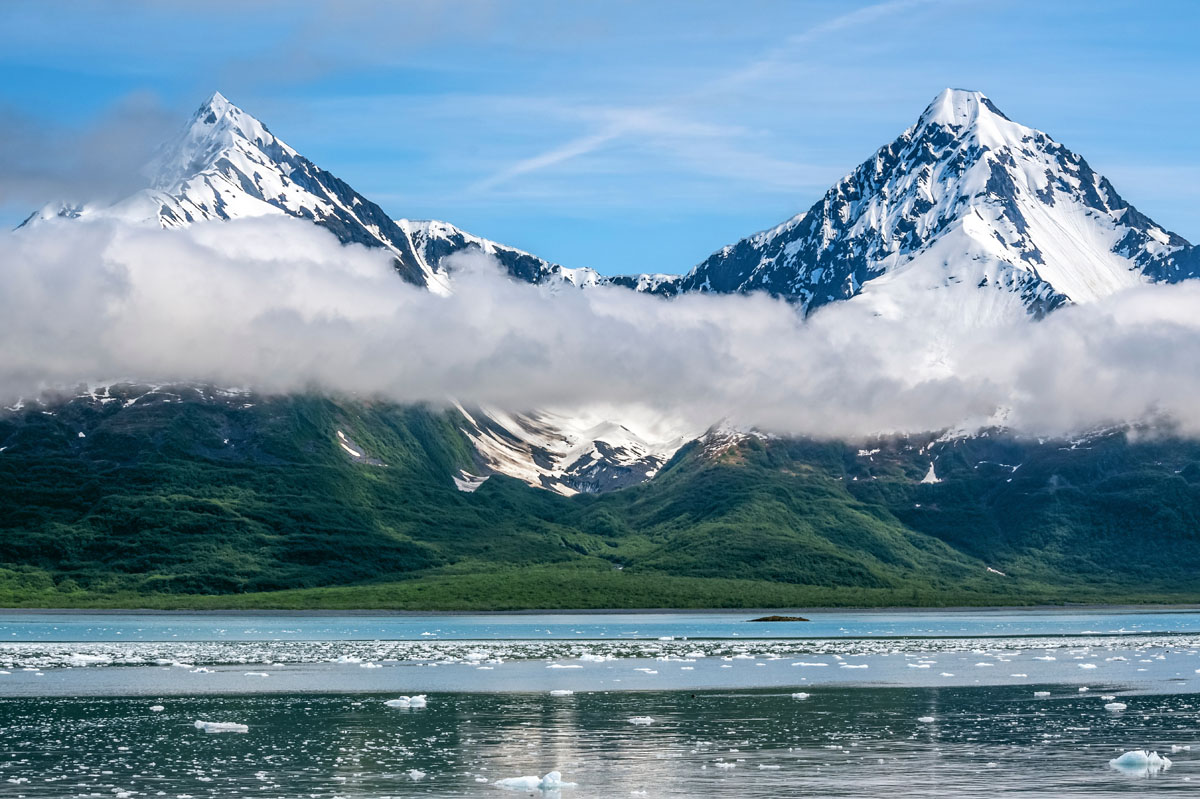 The park itself was established in 1980 as a result of the Alaska National Interest Lands Conservation Act (ANILCA), which sought to protect over 157,000,000 acres of land across the huge state of Alaska. ANILCA resulted in the creation of dozens of national parks, wildlife refuges, national monuments, wild and scenic rivers, recreation areas, national forests, and special conservation areas in what was, and is, the single largest expansion of public lands in the history of the United States.

While ANILCA doubled the size of the National Park System, adding lands to the system that are some of the most stunning in the United States, the history of the act was not smooth, as residents distrusted the park service and didn’t want them to control their land. However, the act has only increased in popularity over the years as the vast amount of protected federal land has drawn millions of visitors to the state, providing Alaska with a significant tourism industry, which is now one of the top economic drivers in the region.

Kenai Fjords National Park, in particular, was created to protect and preserve the Harding Icefield, which is a 700 square mile (1800 sq km) sheet of ice, which, when you include its glaciers (total area 1200 sq mi/3100 sq km), is about the size of the state of Rhode Island. The Harding Icefield is considered to be a remnant of the last major glaciation over the last 20,000-10,000 years, which was responsible for shaping much of the landscape we see today on the Kenai Peninsula.

The Harding Icefield is the largest icefield wholly contained in the United States (there are other larger icefields but they run across the US/Canada border) and is the source of over 38 glaciers, the largest of which is Bear Glacier, to the west of Resurrection Bay. The most popular land-based access point to the park is in the Exit Glacier area, which, although one of the smallest named glaciers, is one of the most accessible.

Even though Exit Glacier and the Harding Icefield are so close to the town of Seward, the icefield was more or less ignored and unappreciated by town residents before the 1920s. However, when the Spruce Creek trail was constructed in 1922, people were able to view the upper portions of the ice field, increasing visitation to the ice and garnering interest in recreating in the area.

The aptly named Kenai Fjords National Park is home to vast fjords, which are glacially-carved valleys that have filled in with seawater due to post-glacial sea-level rise and land subsidence caused by the deglaciation of the landscape. Since the vast majority of the park is covered by ice, the park supports an interesting array of terrestrial mammals, including brown and black bears, marmot, mountain goats, Dall sheep, and moose.

Additionally, due to the park’s northerly latitude and recently glaciated landscape, the park’s vegetation is limited both in variety and spatial distribution. Recently deglaciated areas feature broadleaf forests dominated by black cottonwood, alder, and willow, while the climax forests of the region are mainly Sitka spruce, mountain hemlock, and other similar conifers. Wildflower season in June/July is truly a wonder to behold, as the mountains come alive with vibrant colors of red, blue, and everything in between.

While Kenai Fjords National Park, however, covers a vast swath of land (about half of the icefield and half of the southern part of the Kenai Peninsula), so much of it is relatively inaccessible to the regular hiker due to the park’s extensive ice cover. However, a significant portion of the park is fjord and ocean area, which is home to an abundance of charismatic marine life. In the fjords and bays of Kenai Fjords National Park, you’ll find plentiful sea otters, harbor seals, Steller’s sea lions, orcas, humpbacks, puffins, and more salmon than you could possibly imagine.

While the park is a protected area, however, as part of the Alaska Native Claims Settlement Act (ANCSA) of 1971, the Chugach Alaska Native Corporation has the rights to portions of land within the national park, especially in the park’s southerly marine areas, which were the traditional lands of the Alutiiq people, among others. Additionally, a clause within ANILCA grants both native residents and rural residents hunting and fishing rights within the park when the local fish and game are not under threat.

These days, Kenai Fjords National Park is one of the most unique parks within the US National Parks System. Here, you can explore rugged coastline, vast ice-covered landscapes, and experience an abundance of marine and terrestrial wildlife in one of the world’s most stunning locations.

Like most places in Alaska, Kenai Fjords National Park is nothing short of remote. Sure, the park is located just off of the Seward Highway on the outskirts of the town of Seward, but beyond the one road and two trails that head into the park, there isn’t much infrastructure like what you’d find in the Grand Canyon or Yosemite. Outside of the two main trails, the only way to access the park is by boat or ski plane - both of which we highly recommend!

All of the two trails in Kenai Fjords National Park start at the park’s Nature Center, located at the head of Exit Glacier Road, which starts between miles three and four of the Seward Highway. At the summer-only Nature Center, you can find parking (though the small lot fills up quickly on the weekends!), flush toilets, picnic tables, running water, and trash cans, but no cell phone service - this is the wilderness, after all!

Here, the two maintained trails in the park begin. These two trails are very different and each offers a unique experience of Exit Glacier and the Harding Icefield. Here’s what you can expect:

The lower nature trail is a three-mile (5km) loop that starts and ends at the Nature Center. The trail is partially wheelchair accessible, so it’s a great option for people with limited mobility. From the Nature Center, the lower trail loops around and follows the path of the outwash plain, offering a number of viewing spots from which to see the glacier.

The first part of the lower trail is relatively flat, and some of it is even paved. If you’re feeling up to it, you can hike up a few hundred feet to the top of a rise (an old terminal moraine) and get closer to the ice. Although you can’t touch or access the glacier from this high point, it’s a great place to see the glacier and experience the cooling effects of its strong katabatic winds first-hand. The lower trail is a great option for families, people with limited mobility, or anyone short on time, as it takes most people 2-3 hours to complete.

The beginning section of the trail is deceptively flat, though you’ll quickly start heading uphill, perhaps a bit faster than you want. Over the course of the 4.1 mile (6.5km - one way) trip, you’ll gain nearly 3,500 feet (1066m) of elevation, so this isn’t for flatlanders. That being said, the hike can be broken up into three “sections,” each of which is a worthy destination in and of itself.

After the first mile and a half (2.4km) of seemingly relentless uphill, you’ll pop out into the aptly named Marmot Meadows where there are both marmots and meadows. Here, you’ll be treated to your first views of Exit Glacier, as well as some of the most stunning wildflowers in the state. As you enjoy a break from the steep uphill, you’ll move over rolling terrain until you reach the bottom of the cliffs.

Eventually, just .2 miles (.3km) from the end of the trail, you’ll come across a small emergency hut off to the side. Continue on until the path peters out and congratulate yourself on a job well done. You’ve made it to the end of the trail and, hopefully, the weather is cooperating and providing you with a once-in-a-lifetime view of the icefield.

Alaska is a remote place, so don’t expect a hotel around every corner when you head out into the state’s national parks. Instead, you’ll probably find a handful of lodging options in the larger parks and few, if any in the smaller or more remote destinations. Here are some places to stay if you’re headed to Kenai Fjords National Park:

Visitors to Kenai Fjords National Park are lucky in that the town of Seward is just a 15-minute drive away from the Nature Center, so there are actually quite a few options to choose from in town. Seward is home to a number of hotels and a soaring number of Airbnbs and short-term rentals. Additionally, the town has a handful of campgrounds, one of which is located right along the waterfront.

If you’re looking to stay in the park itself, your only formal land-based option near Seward is to stay at the campground near the Nature Center. This campground is a 5-10 minute walk from the Nature Center, so it offers unparalleled access to the Exit Glacier area.

If you want something even more remote, there are a few companies that run remote lodges in the fjords surrounding Seward. These lodges are usually accessed by helicopter or water taxi, so they offer plenty of peace and quiet in a beautiful locale. The options for remote lodges change every year, so do some research and book one before you head out!

Moose Pass is the closest town to Kenai Fjords National Park besides Seward. This small town is home to some 200 people and is located about 30 miles north of Seward on the Seward Highway. Moose Pass has a number of different small lodging options (don’t expect a 5-star hotel), a convenience store, a floatplane runway (a.k.a. a lake), but no gas station (they would’ve had to name it Moose Pass Gas, so the town decided not to open one), making it a unique place to spend your time on the Kenai Peninsula. 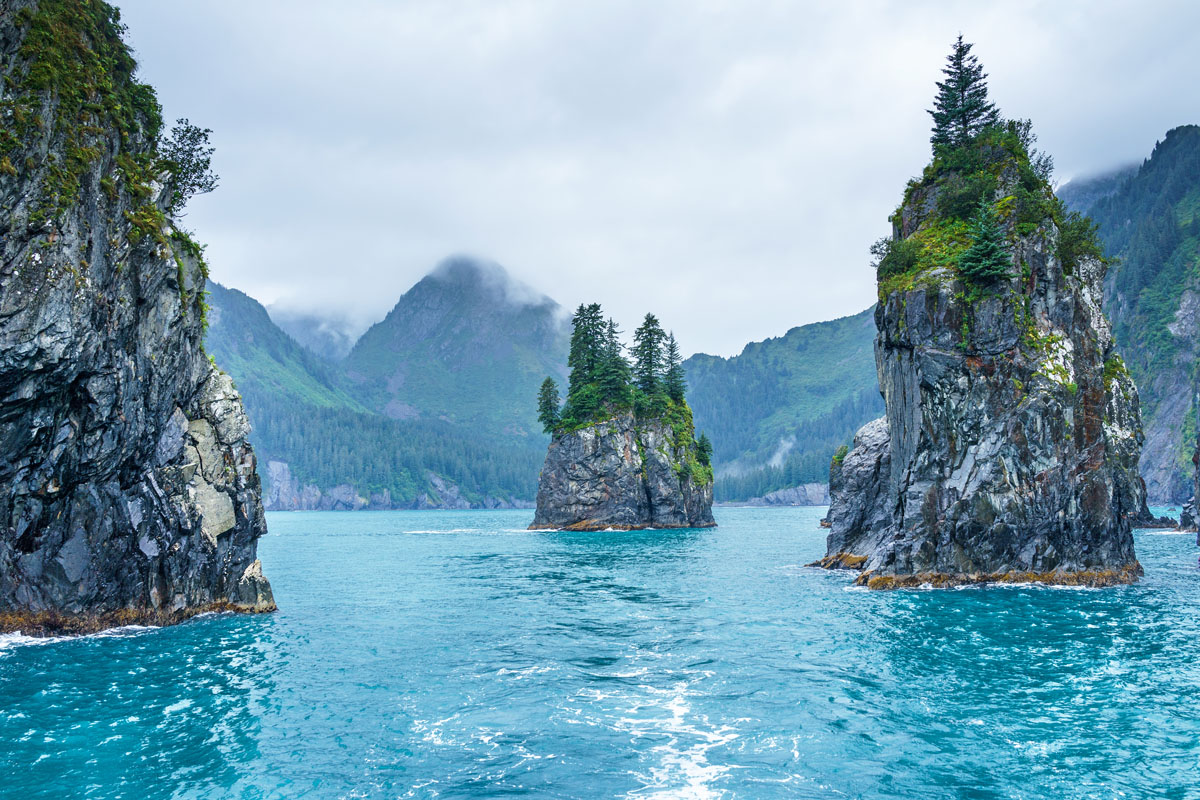 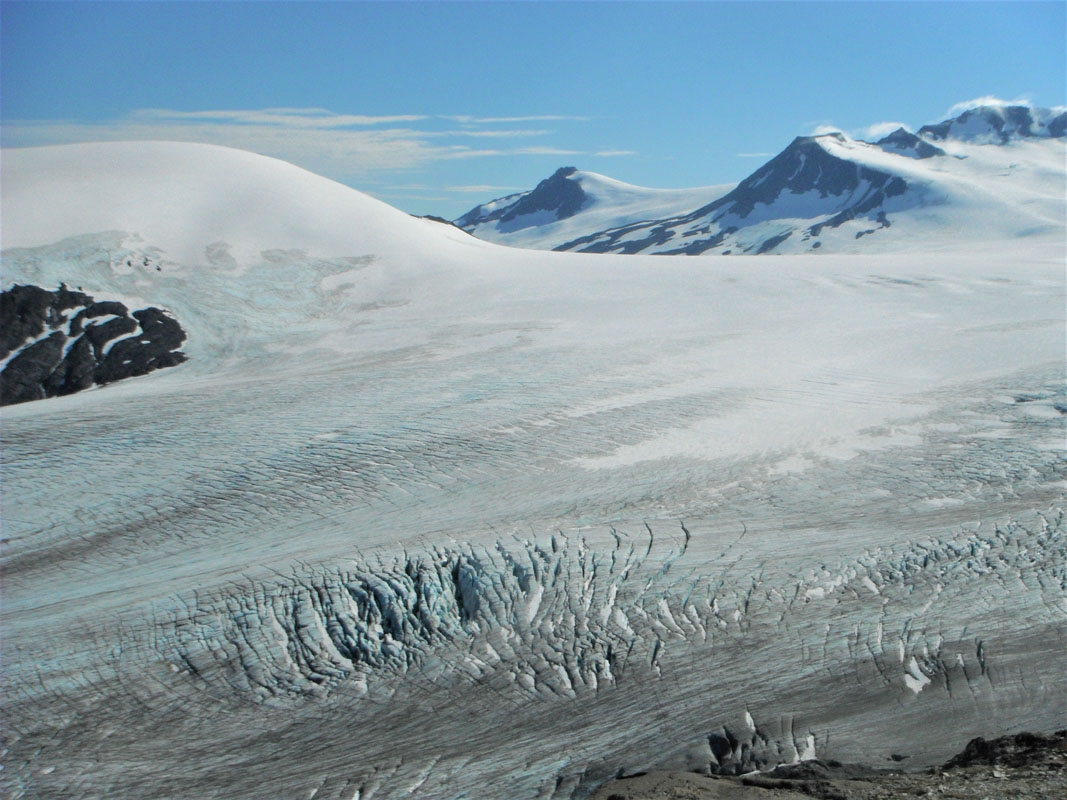 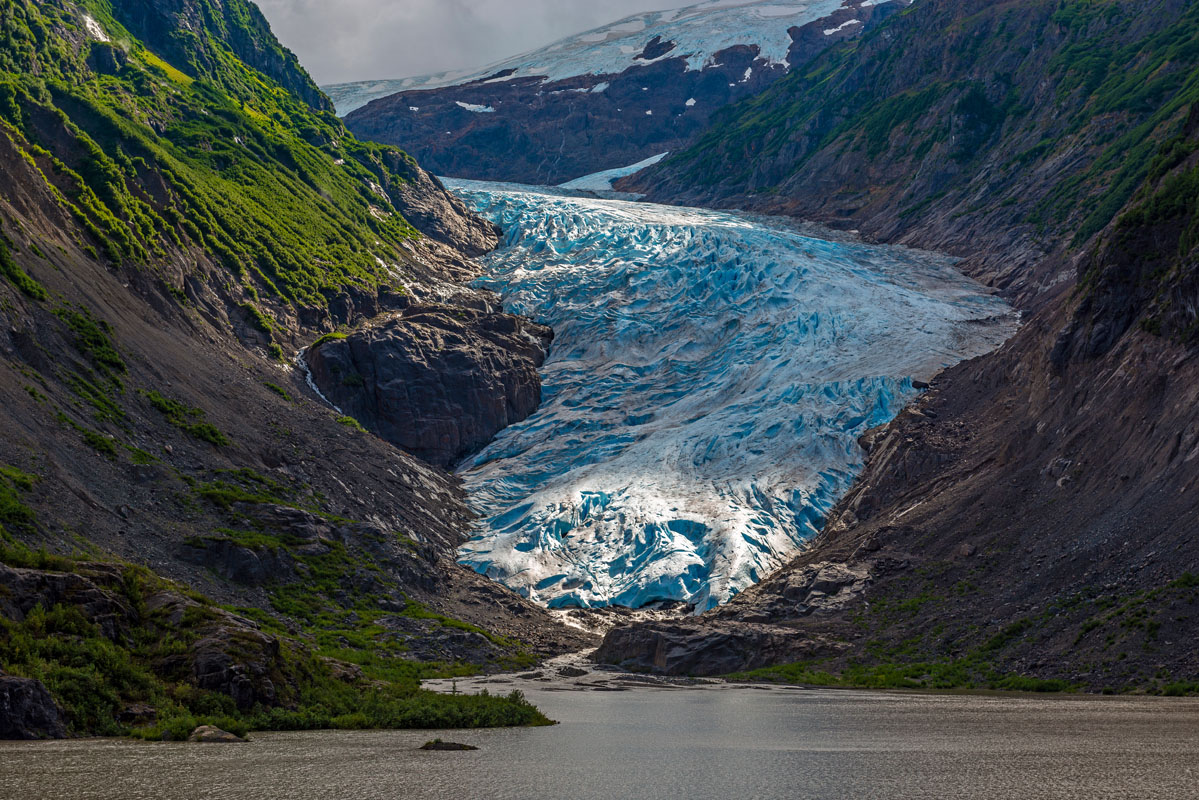 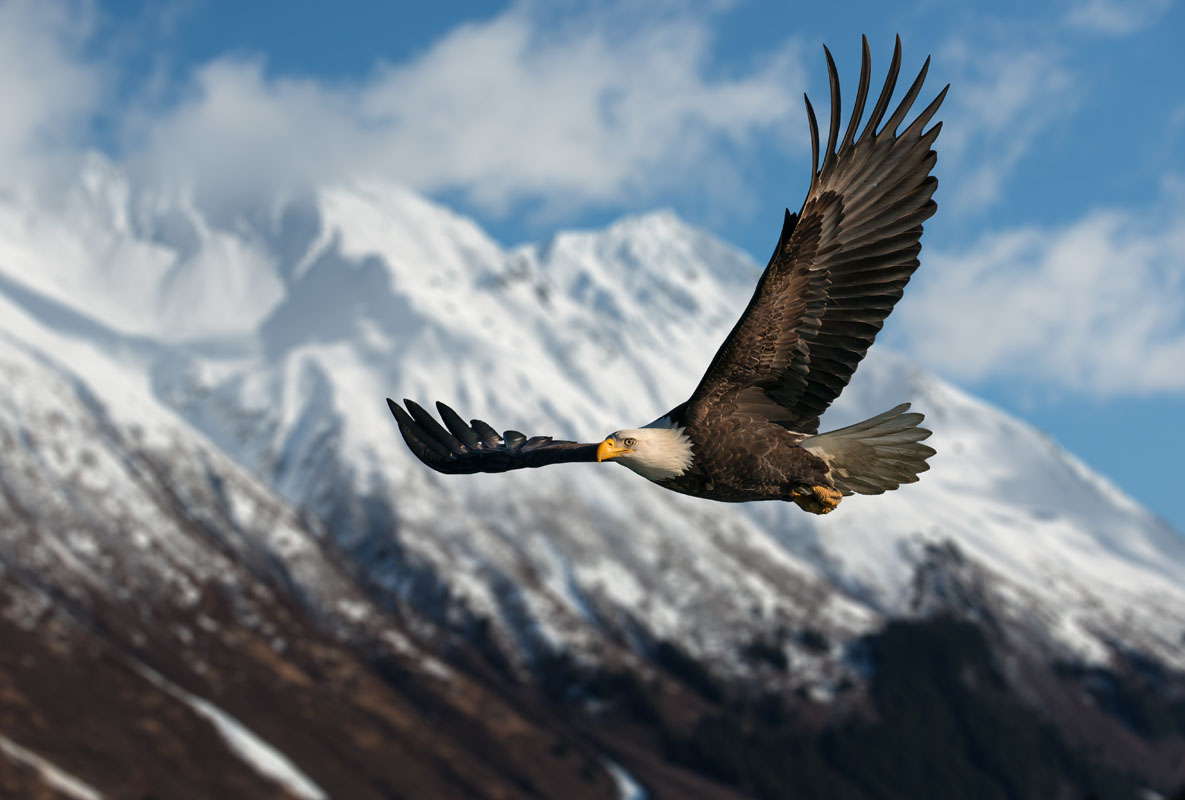 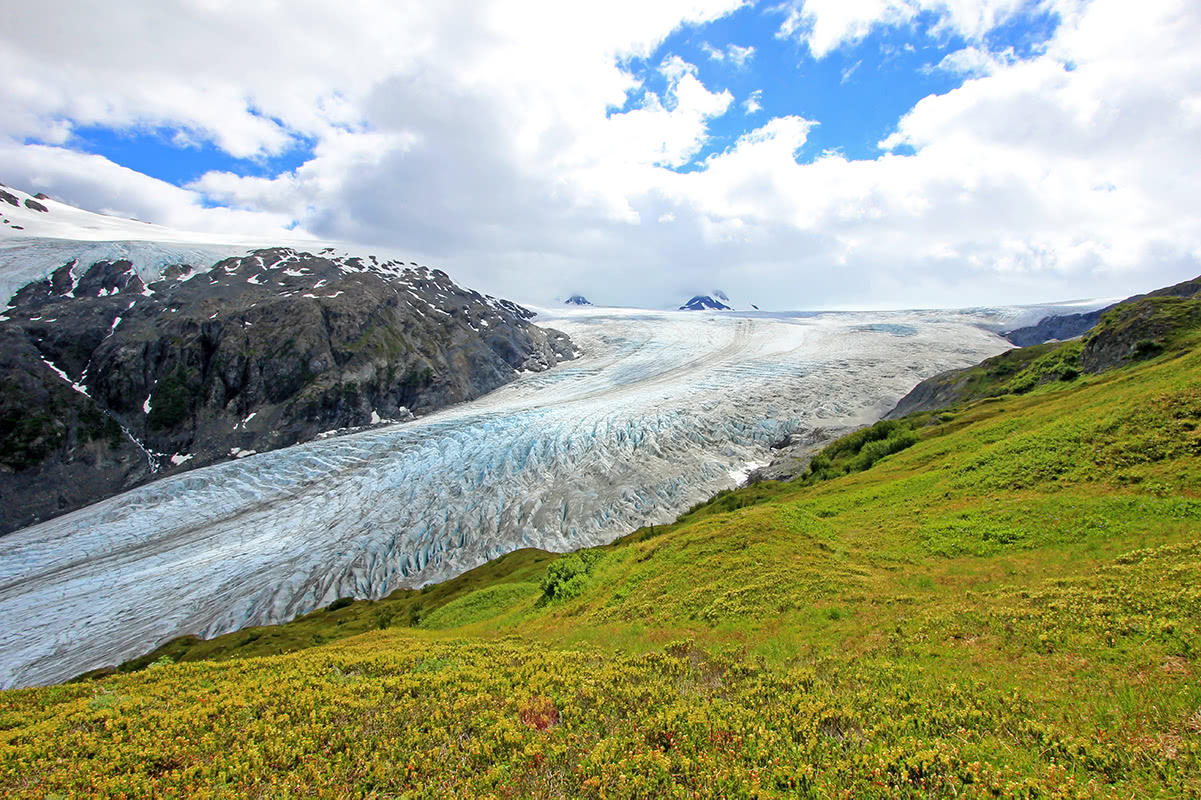