Parco Regionale del Monviso (Monviso Regional Park) is a mountainous park located in northeastern Italy. The park encompasses 55 of some of the most rugged peaks of the southern Alps. The tallest and most prominent peak in the park is Monviso (Monte Viso) at 3,841 m (12,602 ft) with 2,063 m (6,768 ft) of prominence. Monviso is one of the most prominent peaks in the region, so it can be seen from throughout the Po Valley. Legend has it that Monviso was also the inspiration behind the peak in the Paramount logo. 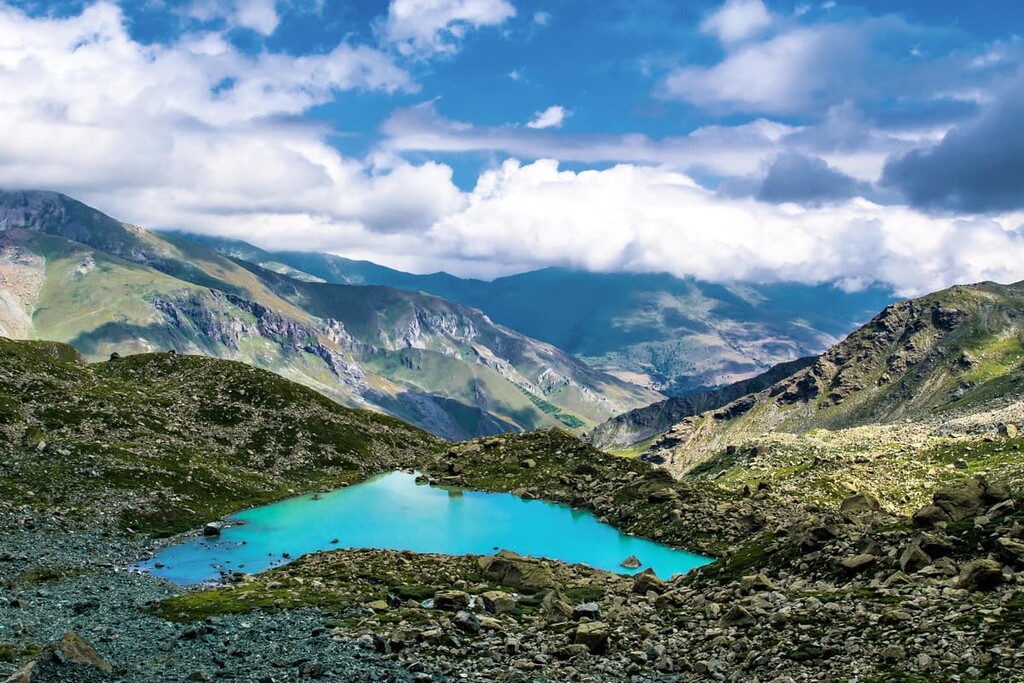 Parco Regionale del Monviso is situated near Italy's northwestern border. As part of the Cottian Alps, elevations in the park vary drastically, from 240 m (787 ft) in the Casalgrasso Plain up to the summit of Monviso at 3,841 m (12,602 ft).

This dramatic range in elevations results in a wide variety of geography within the park. For example, remains of the Po Forest are found in the Cuneo Plain. These woodlands are met with a section of the riparian forest and wetlands that’s dominated by the peaks towering overhead.

Monviso is the dominant feature of the park, sitting near its center. The main peaks of the range span from north to south creating a breathtaking backdrop for the rest of the region. The steep peaks are met with deep river valleys and the headwaters of River Po, the longest river in Italy.

There are eight nature reserves within the park boundaries. Additionally, the two major valleys of the park are the Po Valley and the Varaita Valley. Over 20 alpine lakes are scattered throughout the land, most of which are known for their pristine glacier fed waters.

While the peaks are visible throughout the park, the eastern region of Parco Regionale del Monviso is home to around 7 hectares (17 acres) of peat bog.

Parco Regionale del Monviso is located in the southwestern portion of the Alps, within the Cottian Alps. The Alps are part of the larger Alpide belt, which spans 15,000 km (9,300 miles) across southern Eurasia, traveling eastward toward the Himalaya.

Around 350 million years ago the Alps began forming when the African, Arabian, and Indian Plates slowly collided with the Eurasian Plate. This immense pressure thrust the land upward and helped create the mountains that we see today.

Two major geological features in the park are the Monviso massif and River Po. Around 80 million years ago, the continual pressure led to the eventual rise of the Cottian Alps. What was once the seabed of the Tethys Ocean, has now become the peaks in and around the park.

Meanwhile, a combination of rainfall, melting glaciers, and snowfields eventually formed the River Po. The river further carved out the landscape and provided the freshwater that would eventually enable settlements to form throughout the region.

The range of elevations of the park allow for numerous ecosystems to thrive. The two dominant tree species of the region include the English oak and Swiss stone pine.

Lower elevations are home to oak trees, white hornbeam, wild cherry, and greater ash. Dogwood, hazel, and hawthrom are present but less common. Undergrowth is home to Lily of the valley and pulmonaria blooms. Shrubs are found throughout the wide range elevations with large populations of rhododendron, green alder, blueberries, and bramble.

Populations of ibex are found in the more remote territories of the park along with marmot and chamois. The woodlands are home to species of deer along with wild boards. Birds such as the nutcracker and bearded vulture can be spotted throughout the park.

In recent decades the native population of wolves has slowly returned to the region. Once driven away by human development, these wolves survived in the central Apennines before returning in the 1970s.

Just south of the park, in Parco Naturale delle Alpi Marittime, there are a number of remnants of Neolithic settlements. Rock engravings found in the nearby Vallée des Merveilles and the Aisone caves are some of the most well preserved neolithic remains in the region.

For thousands of years, the southwestern Alps have been used as a passage for communities traveling from the coast into present day France. East of the park lies the city of Saluzzo, which was inhabited by the Vagienni people, also known as the mountain Ligures.

This region came under Roman control around 125 BCE. During the Carolingian age, the region was under control of the Marquesses of Susa. Ludovico I ruled throughout the Golden Age, from 1616–1475 CE. For many years the region was under the control of France, until it was decided that land east of the southwestern Alps would be part of Italy.

The park was established in 1990. It was originally called “Parco del Po Cuneese,” however, its name was later changed. Today, the Natura 2000 Network helps manage the land and has been the primary park manager since 2016.

Parco Regionale del Monviso is home to numerous trails and other opportunities for outdoor recreation. Here are some of the top hiking areas to visit in the park:

Pian del Re to Great Lake of Viso

The Pian del Re to Great Lakes of Viso is a moderate out and back hike totaling 12 km (7.4 miles) in length with 743 m (2,437 ft) of elevation gain. The trail passes through the higher elevations in the park, alongside alpine lakes, and up to panoramic viewpoints.

The name of this trail—Pian del Re—literally translates to “The Plain of the King.” Its sublime landscapes certainly make it worthy of this name. The trail is particularly nice to visit during the autumn months when the myrtles ripen around the alpine lakes in the region.

Hikers should be aware as the route contains a plethora of large boulders that can tumble down the hillside, especially as the snowpack begins to melt. So take care when hiking in this region.

The Tour of Monviso loop trail is often completed over the course of multiple days. The trail is 33 km (20.5 miles) long with 2,342 m (7,683 ft) of elevation gain. As the name suggests, the trail hikes around Monviso, starting on its northern side.

The loop trail passes along numerous alpine lakes. It also features breathtaking views of Monviso, which towers above throughout the entire journey.

Hikers should bring a flashlight or headlamp to pass through the 75 m (250 ft) long tunnel. The trail offers a truly unique experience and still provides impeccable views of the park.

Looking for a place to stay near Parco Regionale del Monviso? Here are some of the best cities, villages, and huts to check out in the region:

Located east of the park lies Saluzzo. Situated in the eastern foothills of the southerwestern Alps, this community has a population of around 17,000 people. Much of the town’s architecture dates back to the fifteenth century and its landscape is complete with cobblestone streets.

Monviso towers above the city to the west. Besides the nearby hiking opportunities, the city’s main sites include Piazza Castello, Church of Saint Giovanni, and numerous local wineries.

South of Saluzzo lies Cuneo, Italy. The city sits just northeast of Parco Naturale delle Alpi Marittime and is located near six major mountain passes. With a population of around 58,000 people, Cueno is one of the largest cities in the foothills of the southwestern Alps and it is the capital of the Cuneo province of the Piedmont region.

Cueno is a bike-friendly city and is home to multiple outdoor activity opportunities, due to its close proximity to the mountains. The city is also famous for its rum-filled chocolates.

If you’re looking to spend more time in the mountains during your trip to Parco Regionale del Monviso (which you should, of course), you can choose to stay in one of the many mountain huts, called rifugios, in the region.

Some of the most popular rifugio include the very famous rifugio Quintino Sella and the rifugio Pian della Regina. There are also a number of other rifugios in the area around Crissolo.

Rifugios in the Italian Alps usually include a bed in a shared room, dinner, breakfast, and a shower. Most cost between €55 and €65 per night and they are usually open during the summer season. 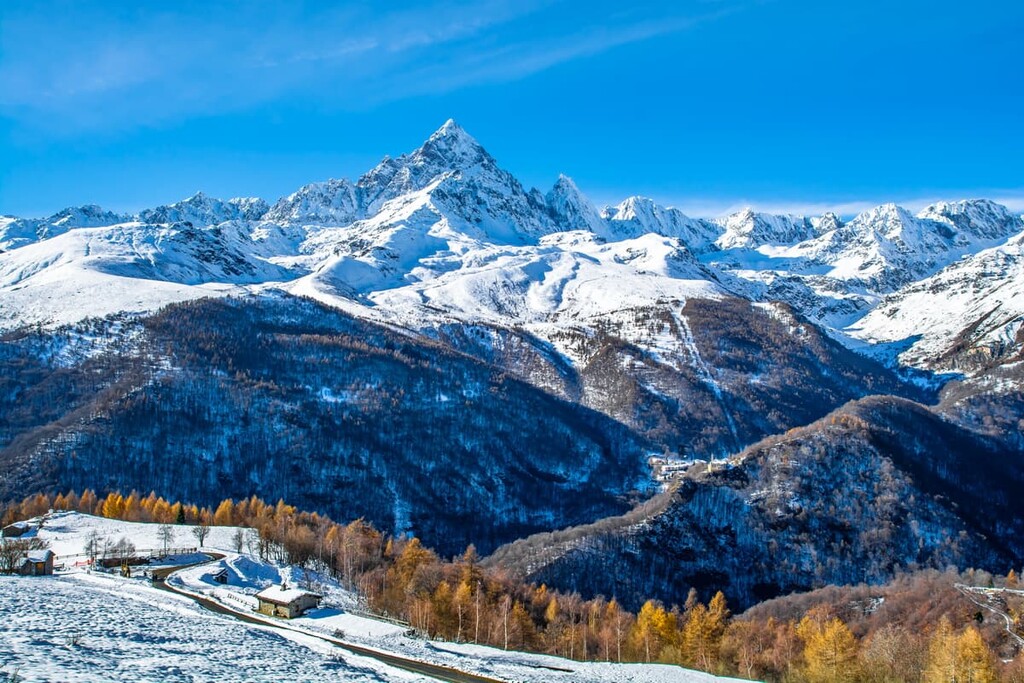 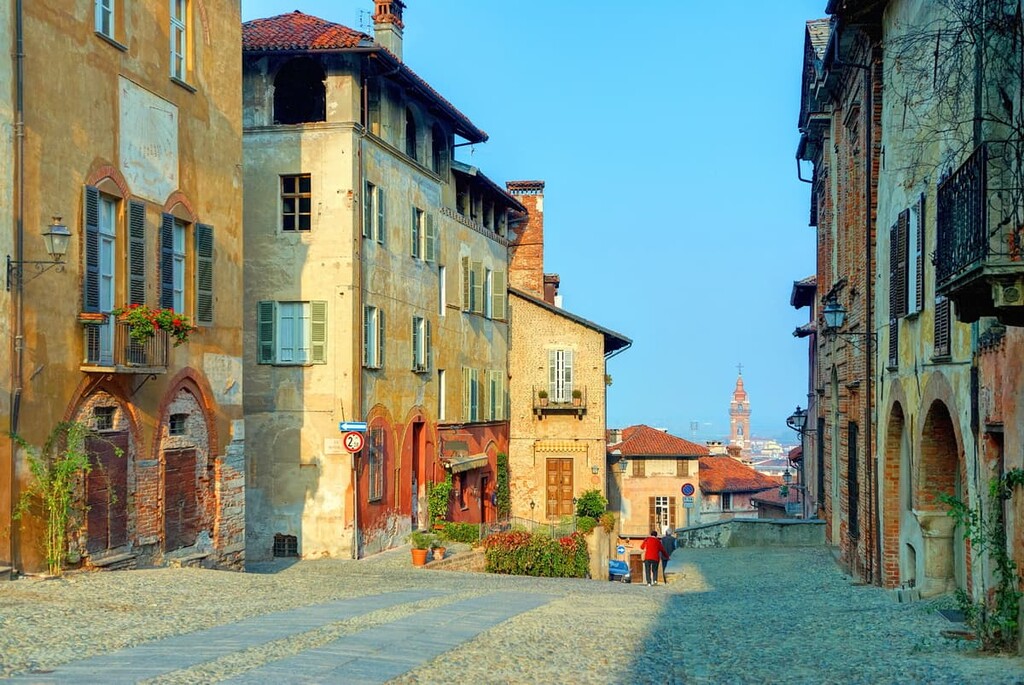 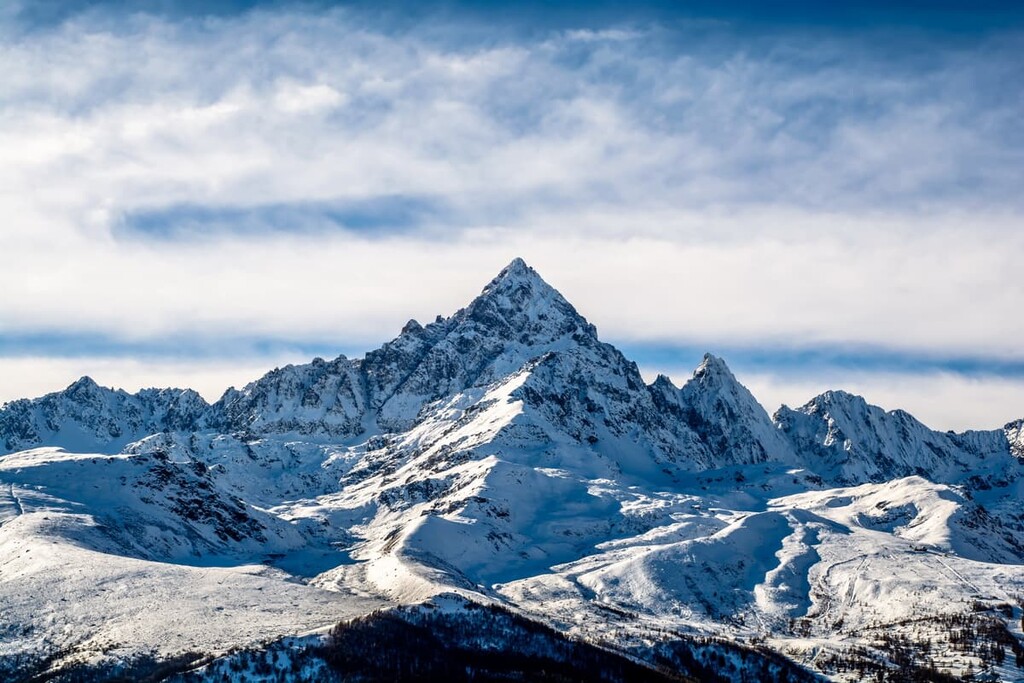 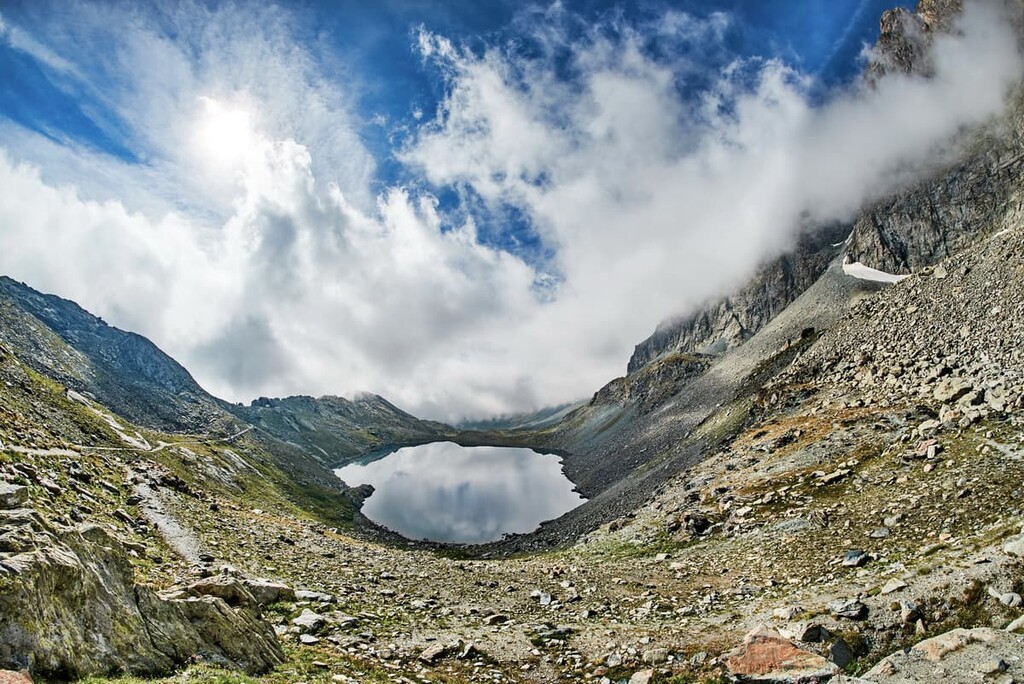 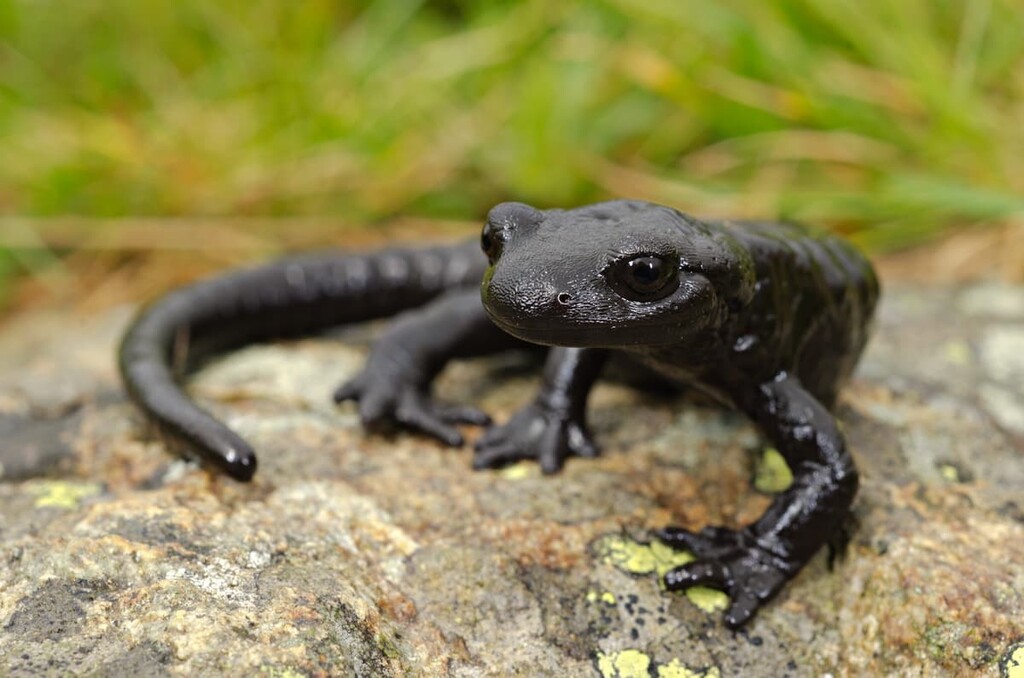