Parco Naturale delle Alpi Marittime (Maritime Alps Natural Park) is a popular hiking and climbing area located in Italy on the northeastern border with France. The park encompasses some of the most rugged and beautiful landscape within the Maritime Alps. There are 174 named mountains in the park. The tallest and most prominent is Cima Sud Argentera at 3,297 m (10,817 ft) with 1,301 m (4,268 ft) of prominence. 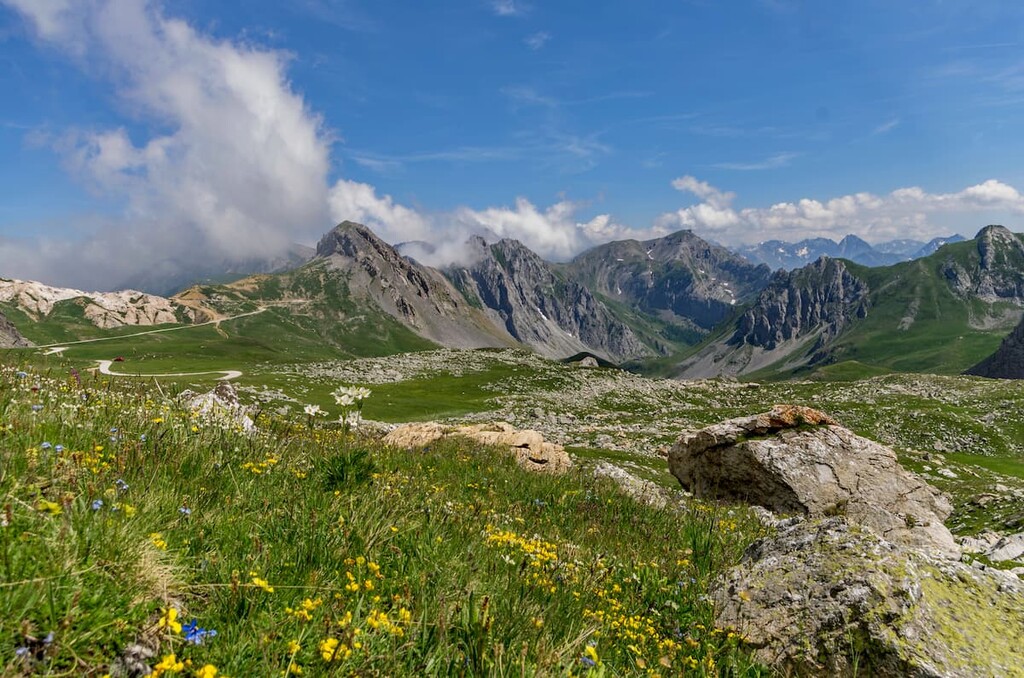 Parco Naturale delle Alpi Marittime is situated along Italy’s northwestern border with France in the province of Cuneo. The park is the largest protected area within the Piedmont region with over 272 sq. km (105 sq. miles) of alpine territory.

The Maritime Alps are the defining feature of the park and they also mark the southernmost region of the Alps. These rugged peaks rise steeply over the alpine lakes and snow patches that surround them. Major rivers in the Maritime Alps include Roya, Var, and Verdon, along with their tributaries.

The tallest peak in Parco Naturale delle Alpi Marittime, Cima Sud Argentera, is located near the center. These steep peaks contrast with deep and narrow valleys. Over 80 alpine lakes are dotted throughout the park, each with vivid blue coloring.

Cirque glaciers are found near the towering peaks in the park, showcasing the final remnants of the once-heavily glaciated southern Alps. Despite the rugged terrain, the park is home to a vast network of nearly 400 km (250 mi) of trails.

Additionally, Parco Naturale delle Alpi Marittime is located near other outdoor recreation areas. These places include Parco Naturale del Marguareis to the southeast and Parco Regionale del Monviso to the north. The park also shares a border with Parc national du Mercantour in the Alpes-Maritimes and Alpes-de-Haute-Provence departments of the Provence-Alpes-Côte d'Azur region in France to the west.

Parco Naturale delle Alpi Marittime is located in the southwestern portion of the Alps. The park lies between the Mediterranean Sea and the Piedmontese plains.

The Alps are part of the larger Alpide belt. Also known as the Alpine-Himalayan orogenic belt, this range spans 15,000 kilometers (9,300 miles) across the sections of Eurasia, leading all the way to Himalaya.

The peaks in the park were formed along with the main range of the Alps, when the African, Arabian, and Indian Plates collided with the Eurasian Plate, around 350 million years ago.

The Argentera-Mercantour Massif, the main massif in the park, is composed of crystalline rock, including different granites. Glacial erosion shaped the deep valleys scattered throughout the towering peaks, leaving behind cirques, lakes, and moraines.

Meanwhile, the outskirts of the park, which encompass the foothills of the Maritime Alps, feature more sedimentary rocks. Here, karst formations of limestone and dolomite have been heavily eroded, leaving behind multiple caves.

The park is a particularly biodiverse place. In fact, the Maritime Alps are one of the most biodiverse subsections of the entire Alps.

Beech trees are the most prolific tree found throughout the park, covering 16 percent of the entire protected area. Four species of conifers are found in the park including silver fir, stone pine, spruce, and larch. Combined these conifers cover just 4 percent of the park’s land area.

At higher elevations, vegetation is still abundant. Here, endemic and rare species of plants can be found. This includes alpine bellflower, Maritime Alps hyssop, Allioni’s primula, heart-leaved catchfly, and Valdieri violet, among others.

There are estimated to be around 6,000 animal species throughout the park. Some of the most common species include ibes, mountain hare, snow vole, wild boar, and ermine. Popular birds in the region include golden eagle, white ptarmigan, wallcreeper, and the small dipper. Other animals in the park include mustelids, otters, bats, and marmots.

The park has a long human history dating back at least to the Neolithic rock engravings found in the Vallée des Merveilles and the Caves of Aisone (Grotte Di Aisone).

As early as 8,000 years ago, the Maritime Alps were used as a passage for communities traveling between the ocean and the fertile plains. Many primitive shelters were built around the turn of the century to accommodate hunting for long periods of time within the mountains.

The first recorded summit of the highest peak in the park was in 1879 by W.A. Coolidge. The decades that followed lead to an influx of mostly Italian mountaineers who referred to the region as their mountain “playground.”

During the nineteenth century, members of the House of Savoy were struck by the beauty of the region near Valle Gesso. The senior members of the royal house decided to turn the land into a hunting reserve. The arrival of royalty allowed one of the poorest regions of the Alps to become one of the most popular among aristocrats, royalty, and nobility.

This former royal hunting reserve was made into a park in 1995. Nowadays, it is one of the most popular hiking destinations in the region. The park also now contains 10 mountain refuges (called rifugios) and 7 bivouac huts (called bivaccos) that hikers are allowed to stay in.

Parco Naturale delle Alpi Marittime is home to numerous trails and other opportunities for outdoor recreation. Here are some of the top hiking areas to visit in the park:

The Bandito and Butterfly Circuit is one of the most popular walks in the park. The gentle trail allows visitors to see two of the main nature reserves in the park.

The Rocca San Giovanni-Saben Nature Reserve and the Bandito Caves within the Necropolis of Valdieri can be found along the trail. This route offers a moderate trail while still having stunning alpine views.

This longer excursion takes visitors to one of the most scenic sections of the Gesso Valley. A mountain hut sits above the pristine Sella Lake amidst both the vast pastures and the steep peaks of the Maritime Alps.

The Lakes Circuit is a day-long excursion that travels throughout the center region of the park. On this trail, hikes pass along three breathtaking alpine lakes as well as the rifugio Valasco and the rifugio Emilio Questa.

Some of the highest peaks in the park can be seen from the trail, as hikers pass through the deep valleys to the alpine lakes that lie within the most remote parts of the range.

Looking for a place to stay near Parco Naturale delle Alpi Marittime? Here are some of the best cities and villages to check out in the region:

The nearest city to the park is Cuneo, Italy. Situated at the confluence of the Stura and Gesso rivers, the city of Cuneo lies to the east of six major mountain passes. Monte Viso, part of the Cottian Alps, can be seen throughout the city.

The city has a population of around 58,000 people and is known for its close proximity to a multitude of outdoor activities. Besides hiking, Cuneo is known for being a bike-friendly city as well as being near many rock climbing destinations. Cuneo is also known for its rum-filled chocolates, which are perfect for indulging after a long day in the mountains.

Located on the Ligurian coast, near the French border, lies the city of Imperia. The beach city has a population of around 45,000 people, and it is quite popular amongst tourists.

Besides its beautiful beaches and its glistening bay, Imperia is known for its production of olives and flowers. There are two historical districts within the city, Oneglia and Porto Maurizo, which is separated by the city’s namesake river, the Impero. 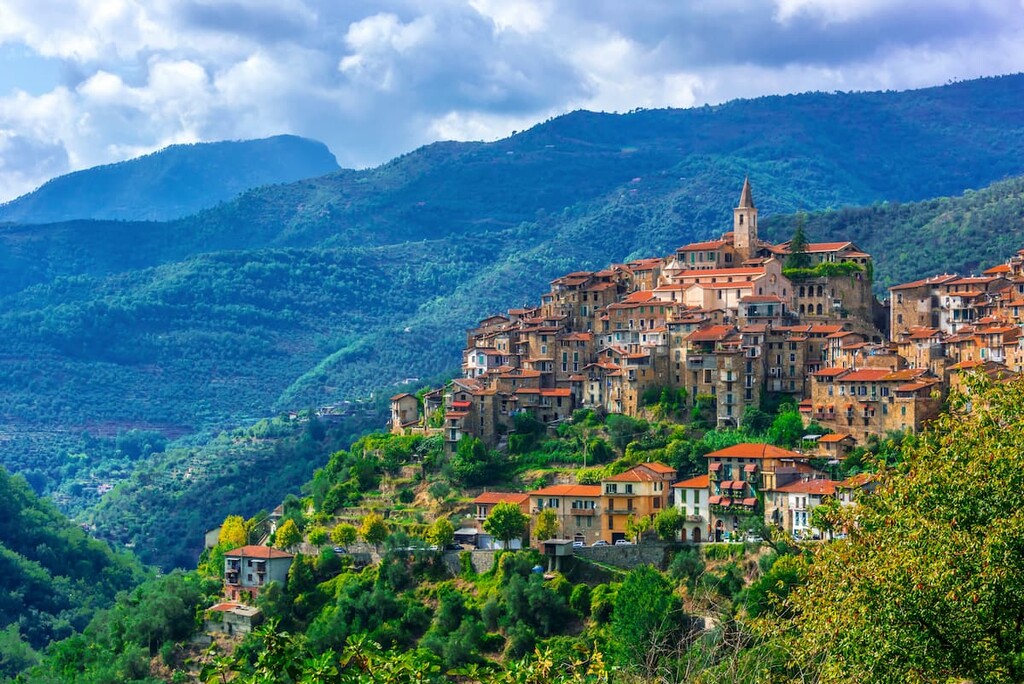 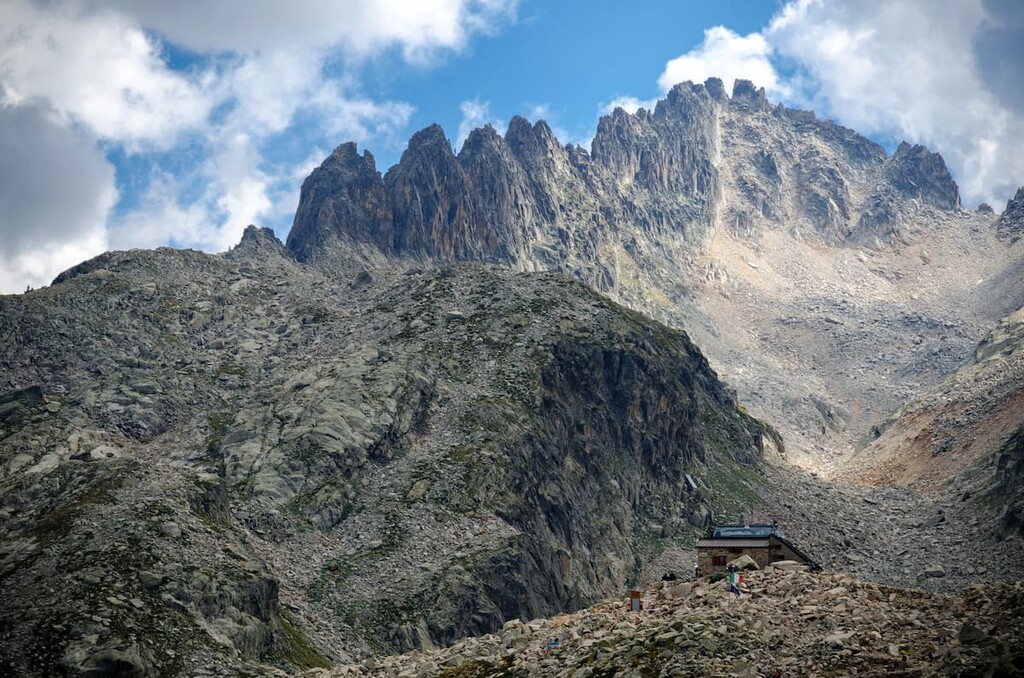 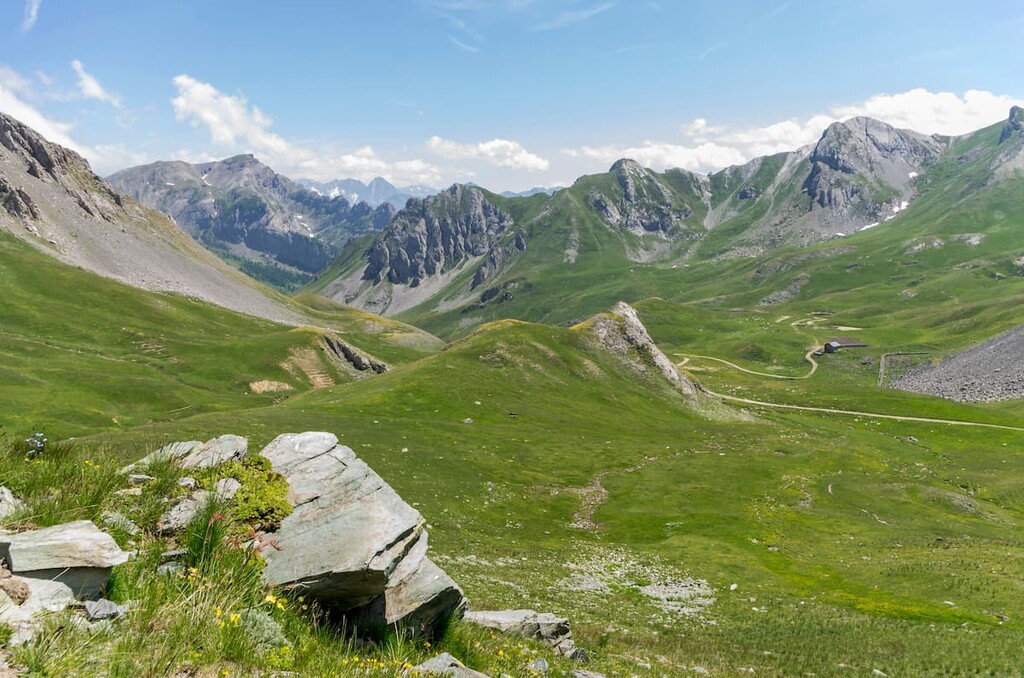 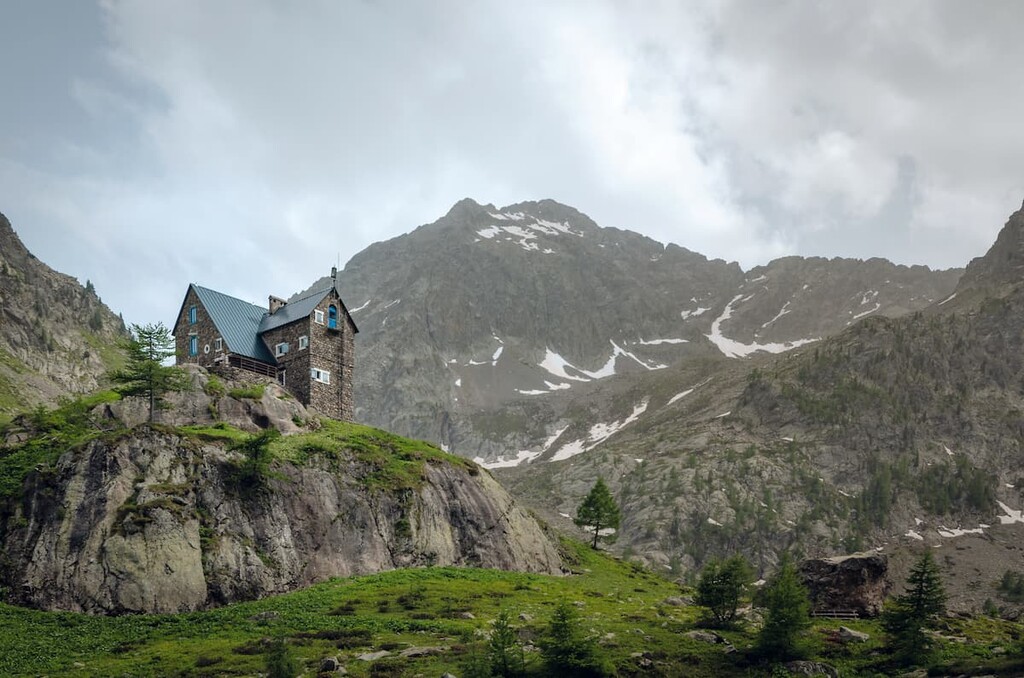 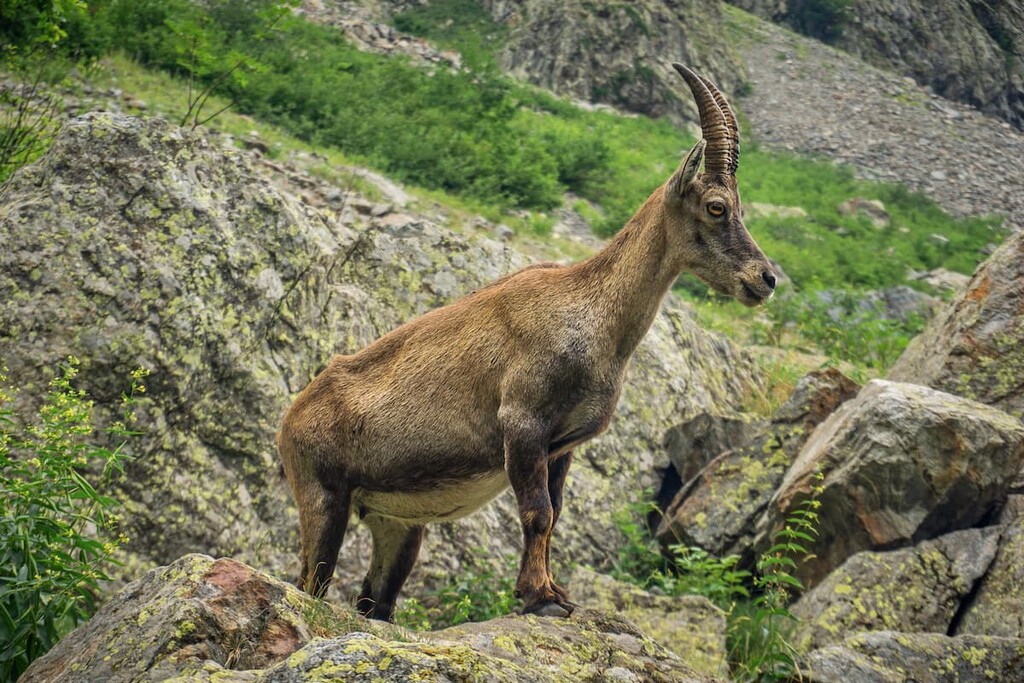 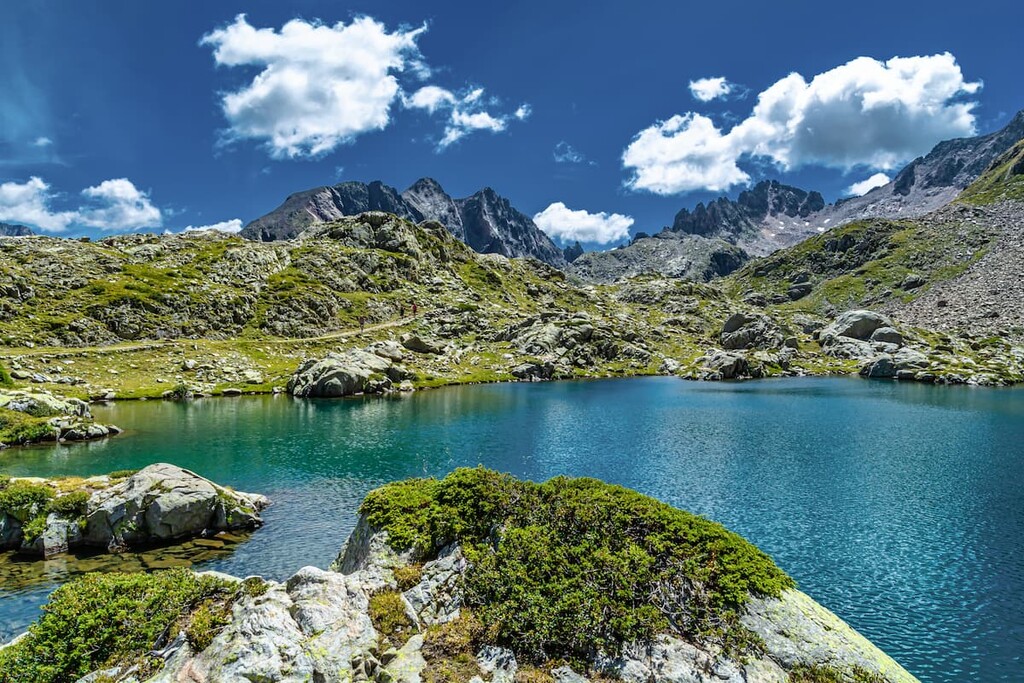